Crooked treasure hunters tangle with menacing black gangsters in this crime-action siege movie from 1992, with a fine filmmaker pedigree. The late Bill Paxton leads a great cast — William Sadler, Ice-T, Art Evans — in a tense standoff that turns into a murderous ordeal when it’s discovered that a million-dollar cache of gold is to be had. The Shout Selects extras include an informative interview with co-writer Bob Gale. 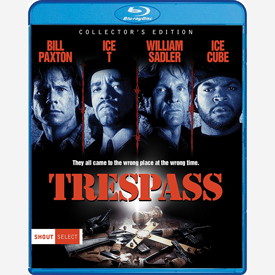 A lot of movies struggle and strain and suffer to get made, and then are ignored and dumped so rudely that the makers wonder why they ever wanted to be in the film business. Much fewer have troubled shoots and then turn into artistic or financial successes, which of course helps everyone forget the painful birth process. I’d like to hear of a show that was a cakewalk going in, followed a carpet of roses on the money end. More typical is the worthy crime picture Trespass, which fell together almost too smoothly. But when the time came for release, it’s like the gods were against it. 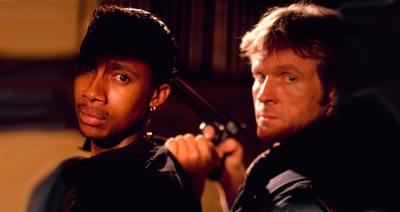 A hole in Walter Hill’s production schedule led Neil Canton to solicit writer friend Bob Gale for a suitable project, and Gale whipped out an old script from his post- U.S.C. days, written with his partner Bob Zemeckis. Back then the Two Bobs were as much into grit and horror as they were comedy ideas, and their story “The Looters” may have been trying to follow in the smart footsteps of John Carpenter’s Assault on Precinct 13 — its fierce armed siege, with street gangs versus lone defenders in some isolated urban hellhole, could be filmed both expensively or on the cheap. (Alternately, Gale describes it as an inversion of Deliverance with a dab of The Treasure of Sierra Madre.) “The Looters” fit Walter Hill’s needs like a glove, and was quickly green-lit by Universal. Hill was able to snag a good cast, including the rappers-turned-actors Ice T and Ice Cube, who liked nothing more than the idea of playing badass criminals in a tense action picture. The early ’90s were boom years for high body count thrillers of all stripes.

Zemeckis & Gale’s story required only a few changes, such as the removal of the one female character. Arkansas firemen Don and Vince (William Sadler & the late Bill Paxton) obtain a literal treasure map showing the hiding spot for a cache of priceless gold antiques, stolen decades ago from a Church exhibition and stashed in a disused factory in East St. Louis. They take off on a weekend gold hunt jaunt, only to stumble onto a dispute between drug dealers and witness a murder. A confrontation with criminal boss ‘King James’ (Ice-T) forces Don to take hostage Lucky (De’voreaux White), King James’s brother. While King James and his volatile cohorts arm themselves, Don and Vince locate the gold treasure, observed by the older, homeless Bradlee (Art Evans). Complications on both sides keep the outcome up in the air. Don is so intent on holding onto the gold that he won’t let Vince alert some passing cops. King James’ jumpy foot soldiers can’t be relied on to follow orders. When the pimp Raymond (Bruce A. Young) discovers that the white guys have found a treasure, he connives with the resentful, violent Savon (Ice Cube) to double-cross King James, start a massacre and take the loot for themselves.

For a movie about white guys (heroes) getting neck deep in black gangsta (bad guy) territory, Trespass is not at all bad. It’s not all that different than a story about white explorers getting lost in African headhunter territory, except there’s no Tarzan to bail them out. An equal emphasis on the black characters keeps the show from outright racism, especially considering that the two white firemen aren’t exactly boy scouts. The sole character motivated by something other than selfish greed is Ice-T’s main thug – he wants to save his brother, and is also just plain curious: what are those two fools from Arkansas doing here, on his territory?

The story is a confected fantasy unrelated to real gangs. King James’ men run around with guns and knives but act more or less like gangsters from an old Warners movie. PC complaints about white filmmakers distorting the Black Experience don’t hold up, as the ambitious black actors apparently loved the idea of taking part in an overblown escapist action drama — tearful docudramas about life in the ‘hood weren’t going to last forever, and every rapper seemingly wanted the fame of big time movie stardom. Since none of the upcoming black talent here ended up years later in the awful Be Cool, they get a pass from me. Besides, the ensemble acting is quite good. Ice-T brings a good presence to his role. They were apparently allowed to tweak their lines to some degree, although Gale and Zemeckis had such a good ear for dialogue, anything is possible. 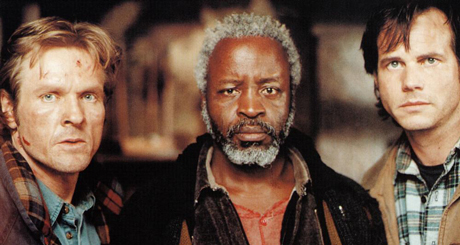 Frankly, the actor that makes everything work is Art Evans. His scornful packrat Bradlee at first wants Art and Don to leave his hideout, but soon enough he’s conspiring gleefully with their effort to survive, waiting for the opportunity to make his move and come out ahead. A neutral party between the warring sides, Bradlee is constantly telling the firemen how utterly hopeless their situation is. The gangsters only know that there are three outsiders holding Lucky hostage, and assume that Bradlee is white.

The gang uses early cell phones, flip-phone items with antennas. It’s only 1992, but we can already tell that the existence of cell phones is going to make suspense thrillers more difficult to concoct – most suspense situations require people to be out of communication with each other. One of the gang members is also a video junkie, shooting everything that goes down on a home video camera. Do the occasional cuts to home video-vision impart a feeling of reality? I’m not sure.

There are no trick plot elements, just an escalating sense of entrapment. Escape routes don’t work, there are no stupid scenes and everybody’s motivation is perfectly clear. The very good William Sadler doesn’t really go gold-crazy like Fred C. Dobbs, as his Don is clearly a dangerous guy from the start. He talks Vince into continuing the search even after they find a dead body. The great Bill Paxton’s Vince seems somewhat spineless as he’s coerced into more violence. He’s bitten by the gold bug as well. Paxton had just finished playing a sheriff with weaknesses in his showcase picture One False Move, and would later play another guy sunk by get-rich-quick notions in A Simple Plan. The black gang is a smart assortment of troublemakers. De’voreaux White’s hostage was already familiar to the mainstream audience, for his popular chauffeur character in the epochal escapist action picture Die Hard, four years earlier. Ice Cube is a convincing moronic hothead and the rest of the gang display varying degrees of malice, insubordination, stupidity, and good common sense.

Walter Hill’s direction is active enough for us to forget that staging the siege in an abandoned factory is really a small-scale ploy; it’s a Roger Corman picture with a larger cast and expensive camerawork and physical effects. We’re told that early digital effects had a hand as well; I’ll bet that much of that went into compositing tricks to augment the fire scenes. Hill doesn’t establish the geography of the setting particularly well, for besides the main door and a single window, we have to accept Don and Vince’s claim that they’re boxed in with no exits. Hill doesn’t overdo the gore — there’s little suffering in the killings and no extended torture situations. The writers attempt to get rougher in a setup in which they prepare some heroin for the suffering Lucky, but except for the acres of profanity, Trespass could well have been filmed in an earlier era. Zemeckis and Gale are classical filmmakers in that they like traditional scene construction, and conclusions that achieve closure in clever ways. Like a Leone spaghetti western, Trespass excels by not reaching for any significance higher than the principle of dog-eat-dog. Trust crumbles as confidences and loyalties are betrayed. Between Don and Bradlee and all of King James’ troops, things eventually boil down to the proposition that it’s Every Man for Himself.

In these days of overblown, aggressively ‘meaningful’ action epics, Trespass’s pared-down ethic is refreshing and commendable. I don’t like very many Walter Hill pictures. This one is a fun diversion, with interesting performances. 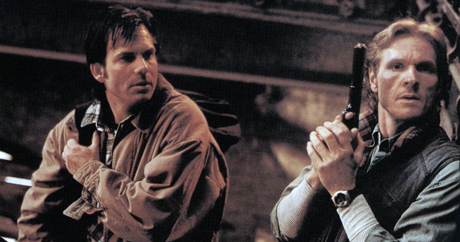 Shout! Factory’s ‘Shout Selects’ Blu-ray of Trespass is a fine encoding of a picture that had appeared before on a murky DVD or two. With all the dank & cluttered factory interiors, the better HD image is a big help. The audio job is quite good as well. Watching the show, we readily agree that there’s no reason it shouldn’t have been a solid hit. The black villains aren’t all that threatening to complacent white audiences — it might have found big crossover appeal.

A featurette-promo from 1992 is tagged, along with the trailer and some forgettable deleted scenes in work print form. Daniel Griffith’s new featurettes do fine when the interview subject has his thoughts organized. We get the producer, the armorer, the stunt director, plus actor William Sadler and producer Neil Canton, but for some reason none of the black cast members. Canton offers some good stories — he says that writer Bob Gale literally plucked the script out of his desk when he needed something fast. Canton had been prepared for a hard sell to get Ice-T and Ice Cube into the movie, only for the ex-rappers to express immediate enthusiasm to be cast in a new Walter Hill gangster pic. Both men were crazy fans of Hill’s street gang fantasy The Warriors.

The interviewee with the big picture is Bob Gale, who tells us the fun story of how the show came together, and the hard luck story of why it was not a hit. All signs were positive going in: Universal liked the show and black-themed pictures were doing well, as were gangster movies. Then the 1992 L.A. riots happened and put the kaibosh on everything — what theater owner wanted to encourage patrons to loot and riot? Exhibitors first wanted the title ‘The Looters’ changed. Then Universal postponed the release to December 25, making Trespass the unlikeliest Christmas release ever. For Zemeckis and Gale, it was almost a replay of what had happened to their 1941, which was released almost immediately after the Iran Hostage Crisis broke. ‘Not since Pearl Harbor have Americans been so up at arms,’ crowed Time magazine, signaling that the country was in no mood to see patriotism mocked. 1941 was a sarcastic comedy about cowardly Californians in the aftermath of Pearl Harbor.