We’re happy to announce the Trailers From Hell Twilight Zone Holiday contest and we’re giving away what might be the greatest thing we’ve ever given away: Twilight Zone episodes. All of them. Every. Single. One.

Entry details are at the bottom, but first, check out this remarkable set from RLJ/Image Entertainment. 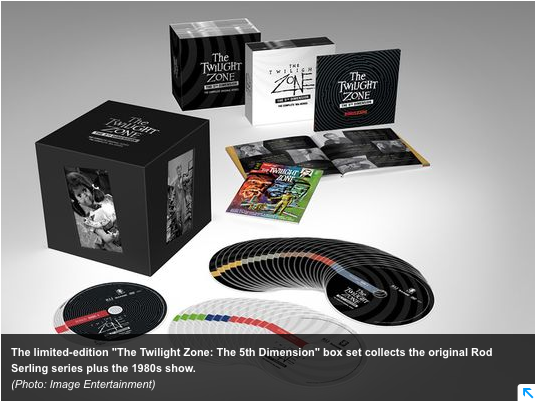 In addition to the two beloved series (225 episodes combined), and more than 20 hours of bonus features listed below, The Twilight Zone: The 5th Dimension Limited Edition Box Set contains one of four possible collectible 1960s Twilight Zone comic books.  Limited Edition packaging features 3D black and white lenticulars and a serialized number on each of the box sets.

Over 20 hours of bonus features include:

You can find more information on this mouth-watering treat here.

It’s easy, really. Send an email to tfhcontests [at] gmail.com and tell us of your favorite Twilight Zone episode or memory. Go all out. Scare the pants off us. Make us laugh. Make us cry. Take us into another dimension.  This prize is huge, so you’re going to have to earn it. (And be sure to include your name and shipping address, too, in case you win.) You have until 11:59 PM PST on Sunday, December 14th to get in your entries. Get cracking