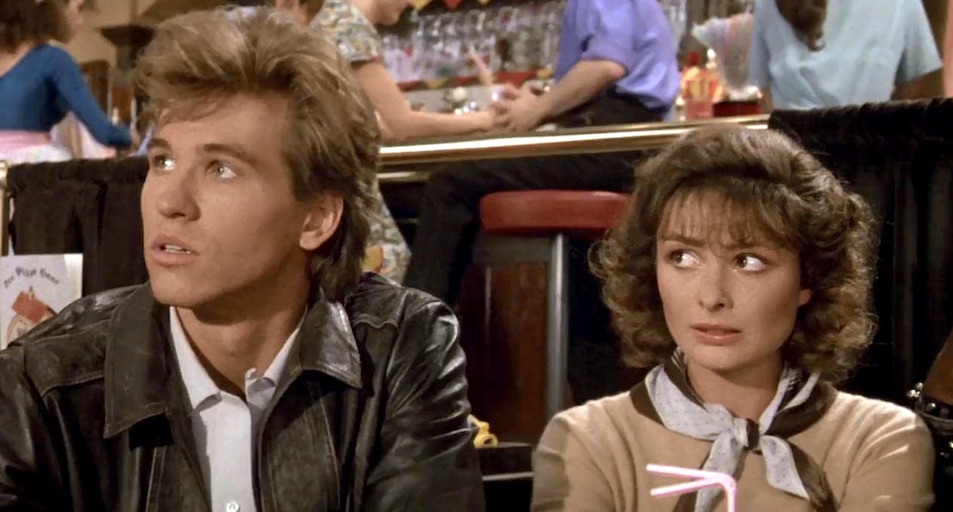 It’s New Year’s Eve once again over at Trailers From Hell, so you know what that means, fellow cineastes: it’s Val Kilmer’s birthday!

As such, our Kilmer Birthday Committee (of one) will continue its annual tradition of watching one Val classic in celebration. Tonight’s entertainment: the criminally under-seen and intensely silly Zucker-Abrahams-Zucker adventure comedy Top Secret! (1984), a mash-up Elvis musical/spy caper parody picture. This relentlessly unserious entertainment carries special significance for Kilmerphiles, as it brought the world Val’s first-ever feature film role.

Now when Val Kilmer makes his celluloid acting debut, he’s not just some featured extra, or the 12th lead, or whatever. Don’t be silly. He’s the star, damn it.

Top Secret! represented their next venture, and though it was a modest box office success at the time (it more than doubled its production budget, estimated to be between $8-9 million), it seems to have unjustly accrued less cultural cache than Airplane! or Kentucky Fried Movie in the intervening decades. Incidentally, another TFH Guru, Jon Davison, produced Top Secret!, in conjunction with Hunt Lowry.

A group of sinister fascistic East German military commanders schemes to take advantage of a concert, headlined by breakout pop sensation Rivers.The clueless singer is hot off the success of his violently absurd smash single “Skeet Surfin'” (“I wish they all could be double-barrel guns” is perhaps the standout line of that very hummable Beach Boys-esque tune, which arrives replete with an interpretive tie-in music video), plus a variety of other skeet shooting-themed masterpieces that the flick alludes to. The East Germans’ ultimate goal: exploiting a vulnerable NATO and unifying Germany once again.

Nick and Hillary eventually find themselves in a positively Casablanca-esque love triangle when Hillary discovers her long-lost former beau Nigel is actually the leader of the French Resistance movement (Christopher Villiers), a critical ally. A series of covert ops hi-jinks ensue, including a convoluted scheme that sees some Resistance fighters camouflaging themselves as an adorable farm animal.

At the end of the day, the plot is really just a loose framework upon which the ZAZ team can just riff, like the satirical equivalent of free jazz.

Then fresh out of Juilliard, Kilmer proves to be a natural lead right out of the gate, adept at balancing his matinee idol looks with a gently wry self-aware humor that perfectly services the material here. He wasn’t even a trained singer, but his vocals as Rivers are convincingly great throughout the flick. The big thing that makes him work here is his charisma and comic timing. In his Nick Rivers character, you can see the outlines of Chris Knight — the acerbic, irreverent character at the heart of Val’s next gig, in the immortal Martha Coolidge collegiate science whiz comedy Real Genius (1985).