Noir if I can help it! Sultry Lizabeth Scott out-‘fatals’ every femme we know in this wickedly ruthless tale of unadulterated female venality. Rough creep Dan Duryea meets his match, as do other unfortunate males that get between Liz and a plump bag of blackmail loot. The Film Noir Foundation’s restoration is a valiant rescue job, for a worthy ‘annihilating melodrama.’ 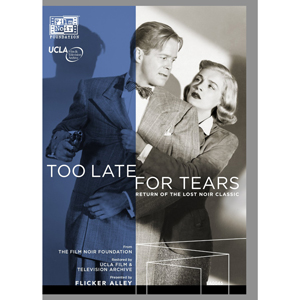 Who’s doing good work for film preservation? The Film Noir Foundation has racked up some impressive rescues and restorations in the last fifteen years or so, seeking out ways to make orphaned titles available both for theatrical screenings and video presentations. This often means locating film elements lost or abandoned by long-gone production companies, or steering good elements back into the hands of their proper owners.

In a co-venture with Flicker Alley, the noir bounty this month, are two restorations in which the Foundation played a major role. I’ll cover the Ann Sheridan thriller Woman on the Run next week. The Foundation’s key operatives also figure heavily in the new disc extras. 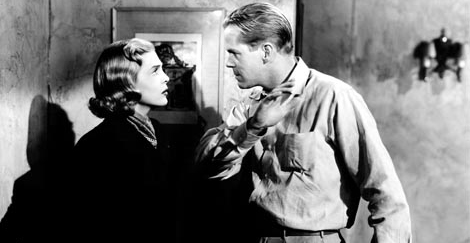 A fine mid-range film noir with especially good performances, Too Late for Tears recycles the Double Indemnity femme fatale plot and adds some cold-blooded twists of its own. The female IS deadlier than the male, when the female in question is this film’s poisonous leading lady. Reflecting some of the nastier content of pulp fiction murder thrillers of the time, Too Late for Tears has all the things we crave in a noir story — it’s far-fetched, provocative and tense.

The immediate reality is Hollywood, in a bland apartment a few feet North of Sunset Blvd. Housewife Jane Palmer (Lizabeth Scott) thinks her dreams have come true when driving with her husband Alan (Arthur Kennedy) in the Hollywood hills. A package meant for blackmailer Danny Fuller (Dan Duryea) is tossed into their car. This unfortunately puts Danny, a hardboiled conman, onto Jane’s case just as she’s trying to convince her husband not to turn it over to the cops. When Alan refuses to play ball, Jane figures he’s expendable and decides to use Danny to help get rid of him. Meanwhile, Alan’s worried sister Kathy (Kristine Miller) grows suspicious of Jane’s shaky story, and enlists new acquaintance Don Blake (Don DeFore) to help get to the truth. The only problem is that Don may not be who he claims to be.

Veteran writer and producer Roy Huggins runs new variations on a proven noir formula, playing the ‘evil temptress’ card as his main theme. It’s not unusual for a film noir story to be launched by a ridiculous contrivance, yet still succeed under its own logic. Assuming someone else’s identity is always a ticket to trouble, as in the Paul Henreid thriller Hollow Triumph. Amnesia and other flimsy phenomena show up frequently too. Too Late for Tears begins with a plot twist only a radio writer could think up. To keep its unlikely story in forward motion, it must then make its female villain outrageously ruthless. And we enjoy every bit of it. 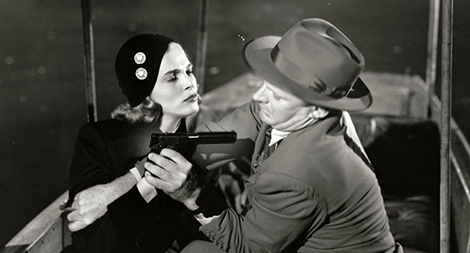 Was there ever a more perfect noir heroine than Lizabeth Scott? She can change in a heartbeat from soft sincerity to unyielding ice. She’s gorgeous but also a little hard, with a cruel mouth that brightens beautifully when she smiles. Her husky voice is attractive in itself. Scott’s classiest appearance is in The Strange Love of Martha Ivers and her most tragic role is in Pitfall.

Too Late for Tears gives us the ultimate Bad Liz., which is part of the noir fun. She’s rather transparent in her trickery — we can tell that her Jane Palmer is trouble from the first. Like Phyllis Dietrichson in Double Indemnity, Jane’s first husband died under mysterious circumstances. Her strategy is to stay two double-crosses ahead of the men in her life. With more than one player using a false identity, it’s sometimes a little fuzzy figuring out who’s fooling who. While convincing her poor husband Alan that she can be redeemed, she twists the hardboiled bad man Danny like he was made of taffy. If there’s any missed opportunities with the Jane Palmer character, it’s that she has no clue as to how ironic are some of her actions. I guess if she did, she’d recognize her own in humanity and cease to function.

The wise reaction to meeting Jane Palmer is demonstrated by a pickup artist in Union Station played by a young Denver Pyle (Texas Ranger Hamner in Bonnie & Clyde). At the first hint of trouble, he makes himself scarce.

Along with a few other leading ladies of the late ‘forties, Lizabeth Scott found herself typed as bad girl in noir melodramas. She indeed seems an odd fit in the Elvis Presley movie Loving You — we keep waiting for her to pull a gun. In bright Technicolor, the film plays like a spiritual purgatory for Ms. Scott and fellow noir veteran Wendell Corey, as if they were paying dues for earlier sins. 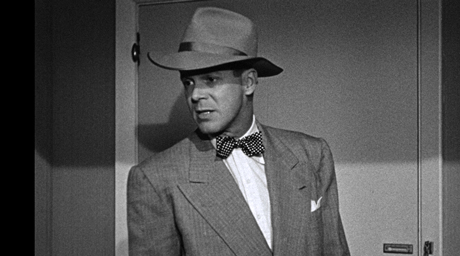 Dan Duryea was already established as an all-purpose bad guy / misunderstood good guy in several noir classics. He begins Too Late for Tears playing Danny Fuller as his straight slimy heel character. In his initial meeting with Jane, Danny soft-sells Jane and then terrorizes her with threats and smart-talk. He then slaps her around like a rag doll. But the fun is his gradual transformation under Jane’s influence. He knows that Jane is maneuvering him into a tight spot; she keeps putting off recovering the money. He’s impressed by her gall and then intimidated by her willingness to kill. An attempt to regain control using sex backfires when he finds that he is the one being dominated.

Danny never intended to be an accessory to murder, and by the mid-point his sarcastic remarks have turned fatalistic. When Jane whines that his cheap apartment is cold, he says “I’ll turn on the oven,” his only source of heat. Then he adds a melancholy “Maybe I shouldn’t light it.” Duryea’s Danny Fuller becomes quite sympathetic, much more so than Jane’s luckless husband played by Arthur Kennedy. Noir characters don’t always have such a dramatic arc: by the end, Jane is feeding Danny the same poison he bought only a few scenes earlier.

A pleasant surprise in the movie is a relative unknown actress named Kristine Miller, who as Jane’s suspicious sister-in-law is naturally likeable and at-ease on the screen. Ms. Miller showed up in tiny roles in only a couple other pictures, Sorry, Wrong Number and From Here to Eternity (where she plays Donna Reed’s Honolulu roommate). Without her warm and sincere presence we’d have nobody to care about in the film, at least not until Don DeFore’s jokester hero comes along. I must admit that I thought DeFore an acting lightweight until I saw his very impressive performance in Andre De Toth’s fine western Ramrod. Defore can slings the hardboiled lingo as well as any noir protagonist. 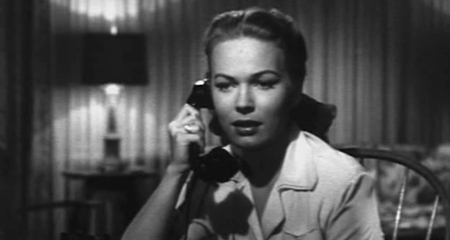 Director Byron Haskin enjoyed a long a career photographing and directing silent pictures. He fell back into special effects photography for Warner Bros. in the ’40s but returned to directing after the war. He’s better than efficient and helps manage many nice visual effects. He also directed another of Lizabeth Scott’s star-making pictures, I Walk Alone. On the disc extras we’re told that producer Hal Wallis packaged the director and several stars for the independently produced film. His name isn’t on the movie but he may have been the only one to profit from it.

One thing that Too Late for Tears excels in is production value. The Mexican hotel may have been a standing set but the one representing the Los Angeles pond with a boat concession was a special item constructed at Republic Studios. The trick is that it is only seen at night, so we don’t get a good look at it. The rear projection for the driving scenes is excellent. The interior roads of Griffith Park appear to stand in for Mulholland Drive. An early scene shows Jane and Alan driving their convertible past Grauman’s Chinese Theater… which is showing The Luck of the Irish.

In addition to Denver Pyle mentioned above, ex- ‘Dead End Kid’ Billy Hallop is the wisecracking boat attendant at the murder scene. Smoki Witfield plays Pete, the garage attendant at the Palmer’s apartment building. He’s set up to be used as an alibi, another borrowing from Double Indemnity. Another suspense mechanism that might be borrowed is the poisoned glass of milk left un-drunk in Kathy’s refrigerator. Were hoping that Jane Palmer doesn’t claim another victim, an accidental one. A really wicked screenwriter could use this situation for an extra-special ironic ‘button’ — an unpunished villain could help himself to the milk, thinking he’s getting something for nothing.

Flicker Alley and The Film Noir Foundation’s Blu-ray + DVD of Too Late for Tears is a class act all the way. The attractive transfer is, if I heard correctly, a new scan from a recovered foreign-version printing element. The image isn’t perfect but it is awfully good — sharp, nicely gradated and stable on the screen.

The FNF principals organized the disc’s added value contents, hiring Steven Smith to direct the featurettes and Patrick Francis to edit them. The making-of piece Chance of a Lifetime has good input from Eddie Muller, Kim Morgan, and Julie Kirgo. Tiger Hunt is about the restoration, which was no simple affair. At one time only 16mm sources could be found for the movie. A collector connection in Baltimore died before his print could be accessed. When another was finally found, it unfortunately bore different main and end titles. Thet were digitally recreated using the 16mm source as a guide, and they look perfect.

Alan K. Rode contributes the audio commentary, which duplicates some of the material in the other extras but then adds quite a bit of Rode’s own observations and personal connections. Especially interesting are his memories of with actress Lizabeth Scott. Perhaps because it was not a success, she didn’t care for this movie or her performance in it. She dodged Rode’s offers to help present it at special screenings.

Finishing off the package is an attractive souvenir booklet with an informative essay by Brian Light. The designs for the disc menus, the packaging and the insert booklet are all nicely coordinated.

Too Late for Tears is a high-end Blu-ray offering that shows how far the Film Noir Foundation has come in its efforts. Back in 2004 Eddie Muller was part of a ‘Dark City’ team that offered an Image Entertainment DVD release of the best available copy of the film at that time, which was pretty poor. Muller contributed a couple of featurettes, which now that I know more about him, might have been taped in his San Francisco home base. Considering the quality of the 16mm print on view in that old disc, I’m even more appreciative of The Film Noir Foundation’s good work.