Director Brad Bird and his co-writer Damon Lindelof take on a daring, ambitious science fiction project: chosen ‘dreamers’ are given glimpses of a gleaming Future City on the Horizon that exists in a parallel dimension of possibility. It’s a chase film, a touchstone ‘Sense of Wonder’ epic and a wholly original visual extravaganza. The spacey gee-whiz thrills are linked to a worthy message, the rescue of a dying planet. 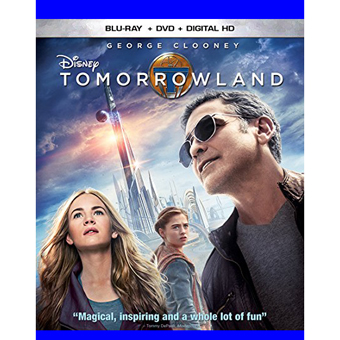 Some newer science fiction movies are as complicated as epic sci-fi novels, the kind that take seven hundred pages to unwind. Last year’s Interstellar was so complex that half the audience had to work overtime just to figure out what was going on. I’m certain that the other half never bothered to worry about what the multi-dimensional ending might have meant.

But at least these movies aren’t dim-brained dumb, which has been the curse of much of sci-fi film from the beginning.

Brad Bird’s Tomorrowland takes on a big mission. The writer-director could easily continue to make sweet Pixar movies, but he instead concocted this E-Ticket jolt into the wondrous frontier of retro sci-fi, and relates it to our real-world problems of planetary survival. From the outside Tomorrowland is an eclectic stack of happy ideas from the history of science fiction. Bird tries to join it all together with what amounts to a Unified Field Theory of futurism. His show asks, ‘What happened to the glorious sci-fi future we dreamed of as kids?,’ and tells us that it’s still possible. I liked every step of his show, which certainly hits the wavelength of a confirmed sci-fi/futurist fan like myself. I kept notes as I watched. I predicted two different overarching themes, and the one I got right was only half right. But for most of the minor steps, I felt almost clairvoyant. Tomorrowland does a marvelous job of relating to viewers that have at least a little background in sci-fi’s Sense of Wonder. We can tell that it will end in a tidy lecture, or five, on futurist politics, which is indeed what we get at the end of this very polished, brilliantly constructed picture.

Here’s as much plot as bears telling. It’s being explained by a man (George Clooney) and his daughter, who apparently live thirty or thirty-five years in the future.

At the 1964 New York World’s Fair, young Frank Walker (Thomas Robinson) brings a rocket pack to a contest. He admits that it doesn’t work well and is rejected, but his persistence attracts the attention of a striking young girl named Athena (Raffey Cassidy). Given a special little Tomorrowland pin, Frank follows Athena into a secret detour in the middle of the then-new “It’s a Small World” ride, and discovers a fantastic future city. Robots fix his jet pack, and he’s able to fly like a regular Commando Cody.

Then the story re-starts with the experience of another young person, Casey Newton (Britt Robertson) taking place now (2015). The daughter of a NASA engineer unemployed because of our abandonment of space exploration, Casey trespasses at Cape Canaveral to sabotage the demolition of the old Apollo Saturn launch site. This qualifies her to be approached by Athena as well. A pin appears out of nowhere, and when Casey touches it she’s transported to the Tomorrowland dimension and its fabulous city. The pin only gives Casey a few minutes’ joy in the marvelous new place — when a timer runs out she’s back in mundane Florida, where all the news is bad and nobody cares enough to fix the world’s problems. But like Frank, Casey’s not a quitter. She takes off for Texas, where a shop has quietly advertised that it wants to hear from anybody who’s found one of those ‘interesting’ Tomorrowland pins. 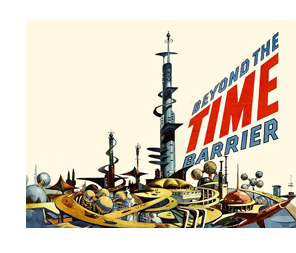 Pretty much like everything Brad Bird comes up with, Tomorrowland dazzles with its deft storytelling and marvelous inventions. This screenplay calls for visual and conceptual miracles of the kind that sci-fi pictures have rarely achieved ever since the mass audience failed to appreciate Metropolis. The micro-budgeted Beyond the Time Barrier and Angry Red Planet both gave us glimpses of a gleaming ‘city on the horizon,’ a desired Utopia of glass and steel… but economic realities required the city in those films to remain on the horizon, as far-away flat artwork. Frank and Casey’s separate peeks into the Tomorrowland city are piercing dreams packed with detail, that pass by so fast we haven’t a chance to sort out the miracles before our eyes. The incredible things Casey sees (I won’t spoil them) aren’t throwaways, but glimpses at a human future so unattainably desirable, it might as well be an afterlife.

Considering that Bird and his co-writer Damon Lindelof adopt a chase format for their film, the middle section holds together extremely well. Things begin to drag when we wait for George Clooney’s character to join in the proceedings. When he does, the first order of business is a House of the Future, where all the gadgets are security devices. Britt Robertson’s Casey Newton is a charming and spunky heroine, yet not so pushy-assertive as to be annoying. Her brand of enthusiasm would indeed attract a talent recruiter from another dimension. 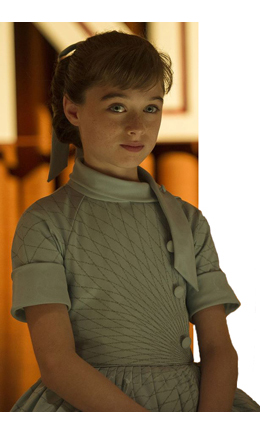 As Athena, Raffey Cassidy is so arresting that she almost throws the movie out of whack. An idealized child-woman complete with a refined English accent, Athena reminds us of an Anglicized Veronica Cartwright, all eyes and freckles and a chin that’s a tiny point. She also reminds us of the child-adult princess in Wolfgang Petersen’s The NeverEnding Story. We are informed that “the city might not exist for much longer.” For a while we fear that Tomorrowland will be similarly ‘neverEnding,’ that the film’s gag will be that young people must keep believing in Tomorrowland, or it will disappear. Well, that’s only part of the story. Brad Bird doesn’t give us a literal Tinker Bell moment, where we’re all asked to pool our brainwaves to bring Tomorrowland back to life. That’s the kind of twist that a BAD Disney film might attempt.

A huge PLUS for this movie is that so much of it seems fresh and unpredictable. Part of this is the way the story is told, withholding information. Let me interrupt for a list of notes I took on the eclectic parade of ideas in Tomorrowland.