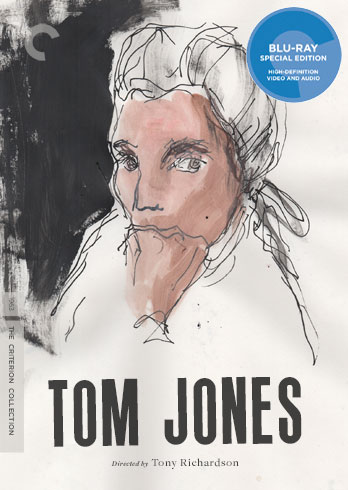 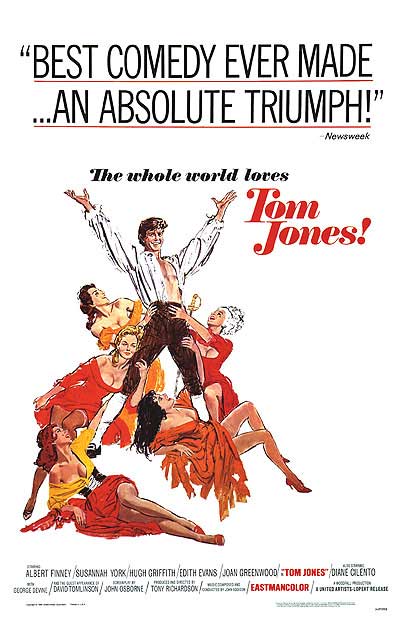 Yorkshire native Tony Richardson, lauded for a string of melodramas set in grayer than gray factory towns, took an abrupt left turn with Tom Jones, an 18th century period piece steeped in the vibrant New Wave sensibilities of the 60’s. Starring Albert Finney as the randy hero, Richardson’s sunny holiday is as far from the mills of Derbyshire as Buckingham Palace. 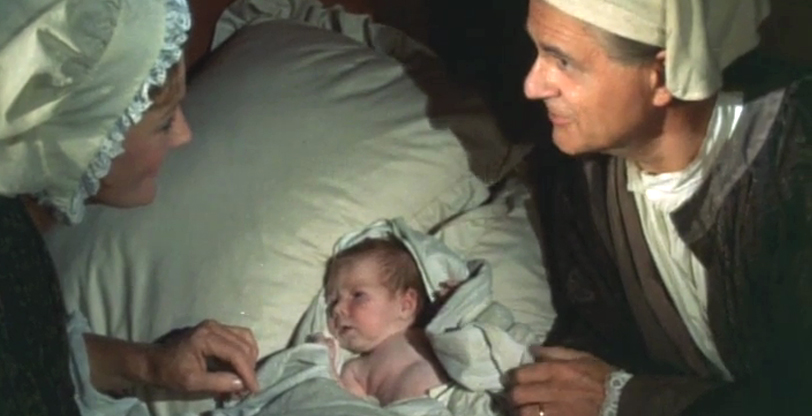 The story begins at the opulent estate of Squire Allworthy where a young servant girl, Jenny Jones, has just deposited her newborn on the Master’s bedroom pillow. The kindly squire takes pity on the distraught domestic and becomes guardian to little Tom who reaches manhood with a wide-eyed disposition and a helping hand for everyone he meets, a Li’l Abner in a tricorn hat and breeches.

It would seem Tom has the best of all possible worlds. He’s well-loved by the town folk and his provincial charm is catnip to the ladies (the term “roll in the hay” may have been invented for this busy young lothario). Though his sexual adventures are many, he is not quite a libertine; his heart itself is chaste and it belongs to Sophie (Susannah York), the breathlessly pretty daughter of the gaseous Squire Western (Hugh Griffith).

But there’s a snake loose in the garden manifested by sallow-faced Master Blifil (David Warner), Tom’s rival for the hand of Sophie and a pious charlatan who uses the local clergy as cover for his odious schemes. Blifil mounts a whispering campaign against Tom, resulting in the lad’s banishment from not only Allworthy’s manor but Sophie’s affections. And so begins Tom’s adventures among thieves, gypsies and the ever-present and always-willing women. And with, to quote Stephen Sondheim, “… a happy ending, of course!”

For most of its running time Richardson’s film is like a rich stout, brimming with good cheer. The vivid score by John Addison roller-coasters between lyrical romance and Benny Hill-inspired harpsichord (most useful in serenading Tom’s frenzied boudoir exploits). And cinematographer Walter Lassally’s rosy, near pointillistic landscapes are ravishing in their reminders of Seurat’s sun-dappled canvasses. That rapturous imagery seems all the more delicate when viewed through the frenetic viewfinder of director Richardson.

With Tom Jones, Richardson injected a mild dose of New Wave fever into the mainstream, leaning on a smorgasbord of hand held shots, jump cuts and still frames. Compared to the genuine article like Breathless or Jules and Jim, much of Richardson’s Nouvelle Vague hijinks now ring hollow – but the film remains fresh and invigorating in its more traditional set pieces like the brutally exciting deer hunt.

To film that sequence Lassally mobilized his camera crew with specially equipped jeeps to keep pace with the stampede while overhead a swooping helicopter presented a sweeping God’s Eye view of the action. The delirious chase gradually turns from exhilarating to awful, culminating in appalling images of bloodstained horses and gutted deer. The cruel pictures of bloodthirsty gentry running roughshod over farmers and their livestock would suggest Richardson is still fighting the same class war he waged in Look Back In Anger.

Equally primal but more in keeping with the film’s epicurean nature is the dinner table seduction enjoyed by Tom and Mrs. Waters (Joyce Redman). Featuring equal portions of heaving bosom and chicken gravy, this sloppy but sexy moment not only summed up the film’s warm embrace of unbridled bedroom pyrotechnics but was a flash point in cinema’s evolution as well. Though Tom Jones was not solely responsible for the forthcoming sexual revolution in mainstream movies (it had a lot of help from Lolita and the Bond films), it certainly assisted in preparing audiences for the full-fledged assault of sybaritic bomb throwers like I Am Curious, Yellow and Last Tango in Paris.

At the time of filming Finney had nothing but complaints about the paper thin qualities of Tom’s character ( “I wasn’t involved….I felt bored most of the time.”) The film bears out his concerns but nonetheless the great actor is completely engaging as the Candide-like wanderer. Other members of the cast are to the manor born, particularly the bushy-browed Griffith as the corpulent blowhard Western and Dame Edith Evans as his no-nonsense sibling. But even with such an animated cast, the film can’t quite sustain the fun and begins to fizzle in the final 30 minutes – even with Joan Greenwood’s  reserved madame whose lusty nature wears down Tom once under the sheets.

The not-so-suspenseful finale finds poor Tom being led to the gallows for his crimes against humanity. Will he be rescued at the last second and reunited with his true love? Suffice to say we knew the answer all along (no film was ever less prone to a tragic ending). The movie gives the last word to Mac Liammóir reciting not Fielding, but, most fittingly, John Dryden:

“Happy the man, and happy he alone,
He who can call today his own:
He who, secure within, can say,
Tomorrow do thy worst, for I have lived today” 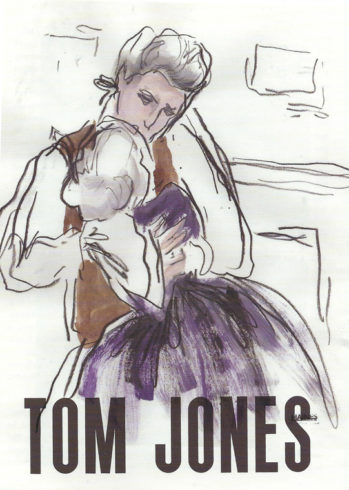 Criterion’s presentation of Richardson’s Oscar-winning film is like a day in the country. A two-disc set, it includes both his director’s cut and the theatrical edit (the director’s cut is actually 8 minutes shorter). The transfer of Lassally’s photography is as beautiful as we could ask for.

Supplements include a 2017 interview with Vanessa Redgrave (Richardson’s wife at the time) who looks back with great fondness, both for the film and her husband. An interview with Walter Lassally is a fascinating account of his time working in the black and white world of Kitchen Sink cinema as well as the vastly different challenges encountered on Tom Jones.

An excellent presentation from York University’s Professor of Film, Duncan Petrie, and a too-short excerpt from a 1982 The Dick Cavett Show with Finney are among the other excellent extras. The package is adorned by the evocative pastels of fashion illustrator Richard Haines.

New 4K digital restorations of the original theatrical version of the film and the 1989 director’s cut, both supervised by director of photography Walter Lassally, with uncompressed monaural and stereo soundtracks on the Blu-ray
New program on the film’s cinematography featuring Lassally
New interview with film scholar Duncan Petrie on the movie’s impact on British cinema
Excerpt from a 1982 episode of The Dick Cavett Show featuring actor Albert Finney
New interview with actor Vanessa Redgrave on her former husband, director Tony Richardson
Illustrated archival audio interview with composer John Addison on his Oscar-winning score for the film
New interview with the editor of the director’s cut, Robert Lambert
Plus: An essay by film scholar Neil Sinyard