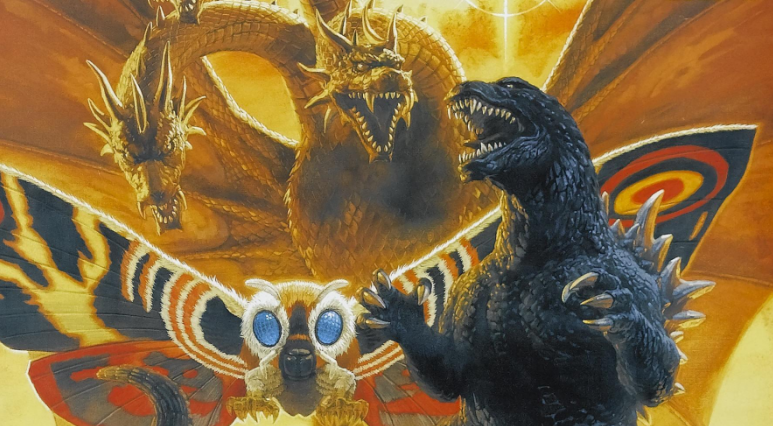 Is it possible, in the grand age of visual and storytelling sophistication in which we live (the sarcasm is coming through, isn’t it?), to experience the exquisite delirium of an old Japanese kaiju movie, say, anything in the Godzilla-and-related-monsters series from roughly 1957 to 1975, without responding to it simply as inept camp, or as something to be immediately discounted or condescended to because of the “fakeyness” of its special effects? (In that time range I’ve deliberately left out the original Gojira, released in 1954, a movie that has always, and particularly since its original Japanese version was re-distributed in the US in 2004, enjoyed a measure of respect from demanding genre audiences because of its status as a painful and powerful response to the devastation at Hiroshima and Nagasaki in World War II.) Is it possible to enjoy these usually formulaic rubber-monster orgies of destruction precisely because of their artificiality?

Now more than ever, I think the answer is yes. There’s a certain state of bliss available to a viewer like me who comes to a movie like Godzilla vs. Mothra (known in the US as Godzilla vs. the Thing), or Destroy All Monsters, or Godzilla’s Revenge with access to the ability to see these movies as a child might. And that statement, by the way, is not intended as the garden-variety plea for a return to innocence (a.k.a. turning your brain off) that one usually hears as a main line of proactive defense before indulging in one sort of nostalgic pop culture orgy or another. The Godzilla movies released by Toho Studios, particularly the ones that came out in the ‘50s and ‘60s, were rife with absurdities, ridiculous situations, filmmaking that often aspired to the rudimentary, brick walls of bad acting, and other obvious “deficiencies.” But if the self-congratulatory impulses we seem to earn as adults can be turned off, there’s a level of atmosphere, of imagination, and even, in some cases, poetry to be enjoyed in what has come to be thought of by grown-ups who know better (and are desperate for you to know that they know better) as one of the movies’ basest and most cringe-inducing ongoing spectacles. 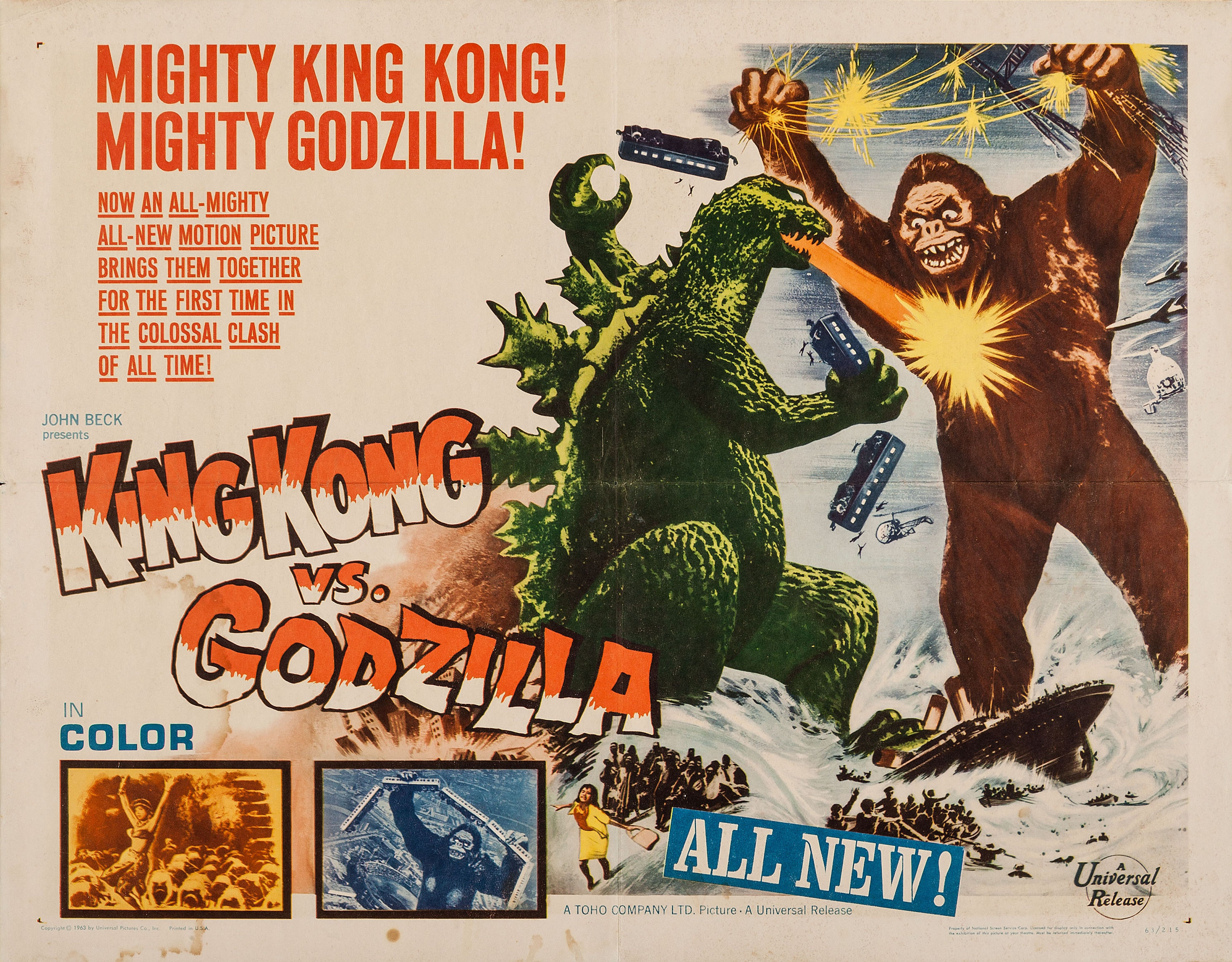 A few years ago, while rummaging around my DVD shelf for suitable treats to introduce to my young daughters (who are now teenagers), I had a chance to revisit one of my old favorites, the none-too-revered King Kong vs. Godzilla (1962). This giant-monster smackdown was the first of the Toho series I was lucky enough to see on a big screen, and at the age of nine or so I was suitably thrilled. So, after I put my DVD in the machine, I began watching with a slight trepidation—of course there was no chance that I would be similarly captivated some 40 years later. But it soon became clear that the movie still commanded a certain strain of magic, for this adult anyway. And along with that magic came a slight wave of sadness, inspired, I suppose, by recognizing the gulf between what captivated many of us as children and how we, in our blinkered sophistication, now often reject some of these early spectacles as too silly or somehow less worthy of our attention because the tricks are easier to see through.

But despite their reputation for obvious (please don’t say the word “cheesy” to me) effects, it may be easier now than it’s ever been to see why the Japanese monster movies, often orchestrated by physical effects master Eiji Tsuburaya, have held such sway over kids, even spilling over into appreciation by manga and anime enthusiasts, and non-manga-anime types such as myself, as adults.

One of the reasons is because these orgies of destruction, these epic battles staged over the skylines of cities just waiting to be decimated, are almost literally the incarnation of a child’s most elaborate dream of toy sets come to life. There’s a sequence about halfway through King Kong vs. Godzilla in which the military digs a big hole in the ground to use as a sort of Burmese tiger pit in ensnaring one or both of the monsters, and I couldn’t help but be struck by all the shots of construction equipment digging around in the dirt, dump trucks moving loads of earth around, and noticing how the scene was exactly the sort of scenario boys play at all the time in their backyards, perhaps even staging battles between their favorite monsters in the same way. That perhaps all-too-obvious observation was, for me, the key to recapturing access to the guilt- and snark-free charm that has always been part and parcel of Toho’s best, as well as even some of their worst and laziest creations. 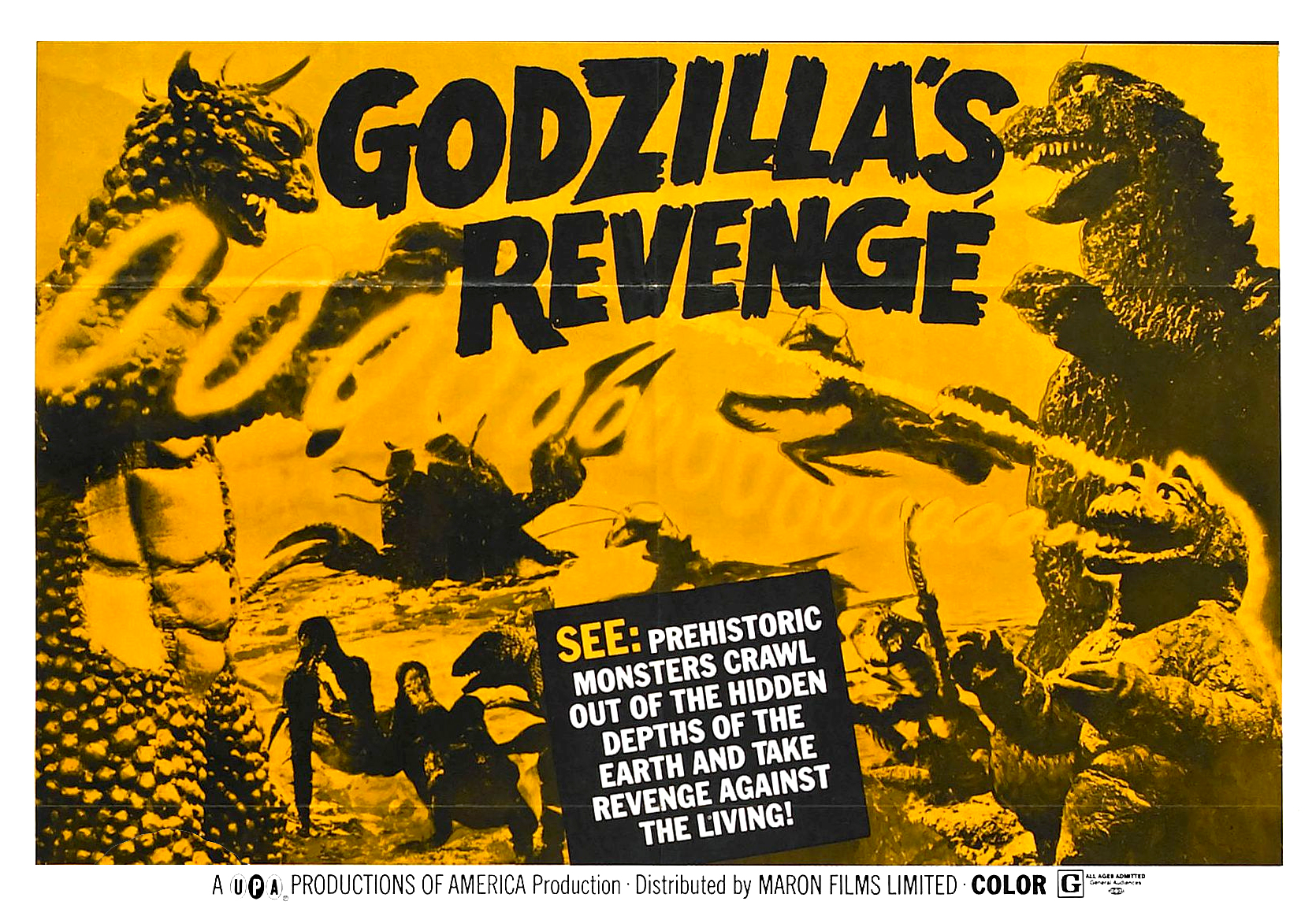 And Godzilla’s Revenge (1969), often considered one of Toho’s low-points (it certainly was held in low esteem by the informed and enlightened crowd I ran with as a monster-loving teenager), is actually a delightful garden paradise of comically-scaled destruction, a reverie on the power of a desperate child’s imagination to use his fantasies of giant monsters to protect himself from the very real dangers, in particular vicious bullying, of everyday life. After all, Godzilla himself had already, in the movie series and in the public sphere, made the transition from terrifying spawn of nuclear blight to defender of the downtrodden, so casting the giant radioactive reptile as a father-protector wasn’t such a stretch. Whether the downtrodden are defined as a city needing protection from another destructive creature, like King Ghidorah, or, as in the case of Godzilla’s Revenge, defending a boy from danger and teaching his own son, Minya, how to hold his ground against the terrifying denizens of Monster Island, Godzilla could stand tall as an honorable citizen in the life of a child’s mind.

But what about the poetry? A few years ago  I wrote about The Green Slime for Trailers from Hell, with an accompanying piece on my own blog focusing on to the visual pop art majesty of that 1969 space epic, both essays to one degree or another considerations of the movie’s beautiful toy-set sensibility as epitomized in its wonderful, not-at-all-“convincing”-in-the-way-special-effects-movies-are-supposed-to-be-in-the-21st-century, special effects. The two men primarily responsible for those effects, which achieved a sort of glorious nirvana of artificiality, were Akira Watanabe and  Yukio Manoda, both veterans of the Toho special effects department from Gojira in 1954 up through the studio’s glory days in the early ‘70s. If The Green Slime was, arguably, their great achievement independent from the supervision and overriding sensibility of their mentor Tsuburaya-san, then they certainly had plenty of time to ramp up to it, and the work they did with the master on 1966’s Invasion of Astro-Monster (known in the US as Monster Zero) might just be their best, hinting of Slime-y glories to come, of course, but also on its own terms in creating some of the most strangely beautiful imagery in any Godzilla film. 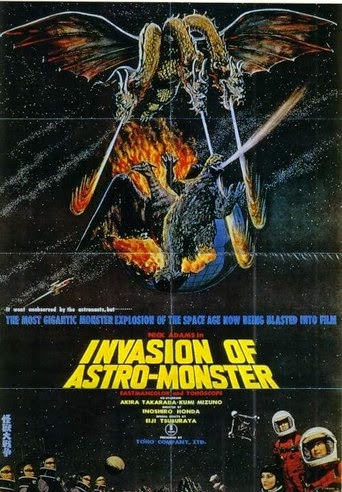 Invasion of Astro-Monster is full of glorious touches, from the craggy, shadowy surface of Planet X—an ostensibly beautiful landscape, soon to be ravaged by Monster Zero himself, which manages to suggest the possibly sinister intentions of the underground denizens whom astronauts Akira Takarada and Nick Adams will soon meet—to the stark interior of the planetary underground itself, all metal menace yet with hardly a sharp surface in sight. (It’s all weirdly sinuous curves, including the rounded edges and circular tendencies of the de rigueur Planet X uniform.) But Watanabe and Minoda really hit their stride when the action moves back to Earth, where the audience is treated to detailed studio recreations of tranquil landscapes presided over by the ostensibly friendly forces of Planet X and their fleet of, again, perfectly rounded spaceships—those vehicles resemble nothing so much as gleaming, floating whitewall tires on which the whitewall has overtaken all traces of black rubber, or perhaps they’re the most gorgeous flying dental lamp attachments in all of outer space.

Watanabe and Minoda absolutely outdo just about anything in the Godzilla oeuvre, however, with the sight of Godzilla and Rodan, unearthed from their most recent resting places, and encased in transparent electrical bubbles for transport back to Planet X, where they will team up to rid the planet of the scourge of Monster Zero. (Spoiler alert: the monster is King Ghidorah, whose three heads, undulating in fearsome disregard of physics, result in an expressive, unforgettable symphony of motion all their own, more so than any other monster in the Toho arsenal.) The image of the fearsome Godzilla and Rodan suspended in air, frozen, almost as if in utero, far surpasses the very entertaining but far more typical battles and earthly carnage the rest of the movie has in store, though Godzilla’s victory dance on the surface of Planet X achieves an unexpected level of giddiness that the whole of Invasion of Astro-Monster wisely never attempts to top. 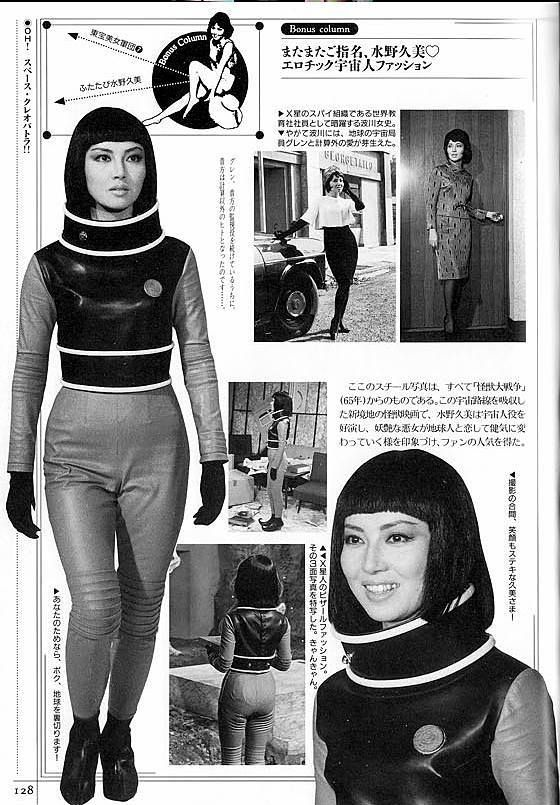 Finally, mere words are hardly up to the task of describing the singular poetry of Kumi Mizumo, veteran of several Toho productions (Frankenstein Conquers the World, War of the Gargantuas), here cast in femme fatale mode as Miss Namikawa, a villainess decked out in Planet X couture and exquisitely shellacked hair. Fully costumed, she offers an image fully capable of explaining without the use of a single English, Japanese or X-ian word just how a man like Nick Adams, or any of us, really, could fall head over heels, or rubber boots, under her nefarious influence. So, I shall attempt none.

When I was growing up, the Toho movies my friends and I enjoyed countless times on weekend afternoon TV, were always considered second-rate because of their inability to achieve a level of acceptable “realism” in their special effects. There was probably even an element of cultural superiority involved in lack of appreciation for Japanese creations over similar monster epics coming out of America and the UK at the time. But really, genre fan, did the sight of a Cyclops or a swarm of living skeletons in a Ray Harryhausen epic ever achieve any more realism than a tag-team monster battle royal conducted in the shadow of Mt. Fuji? Of course not. Style and technique commands all in both universes, and it’s entirely possible to be moved, delighted, inspired by the reveries they both unleash. 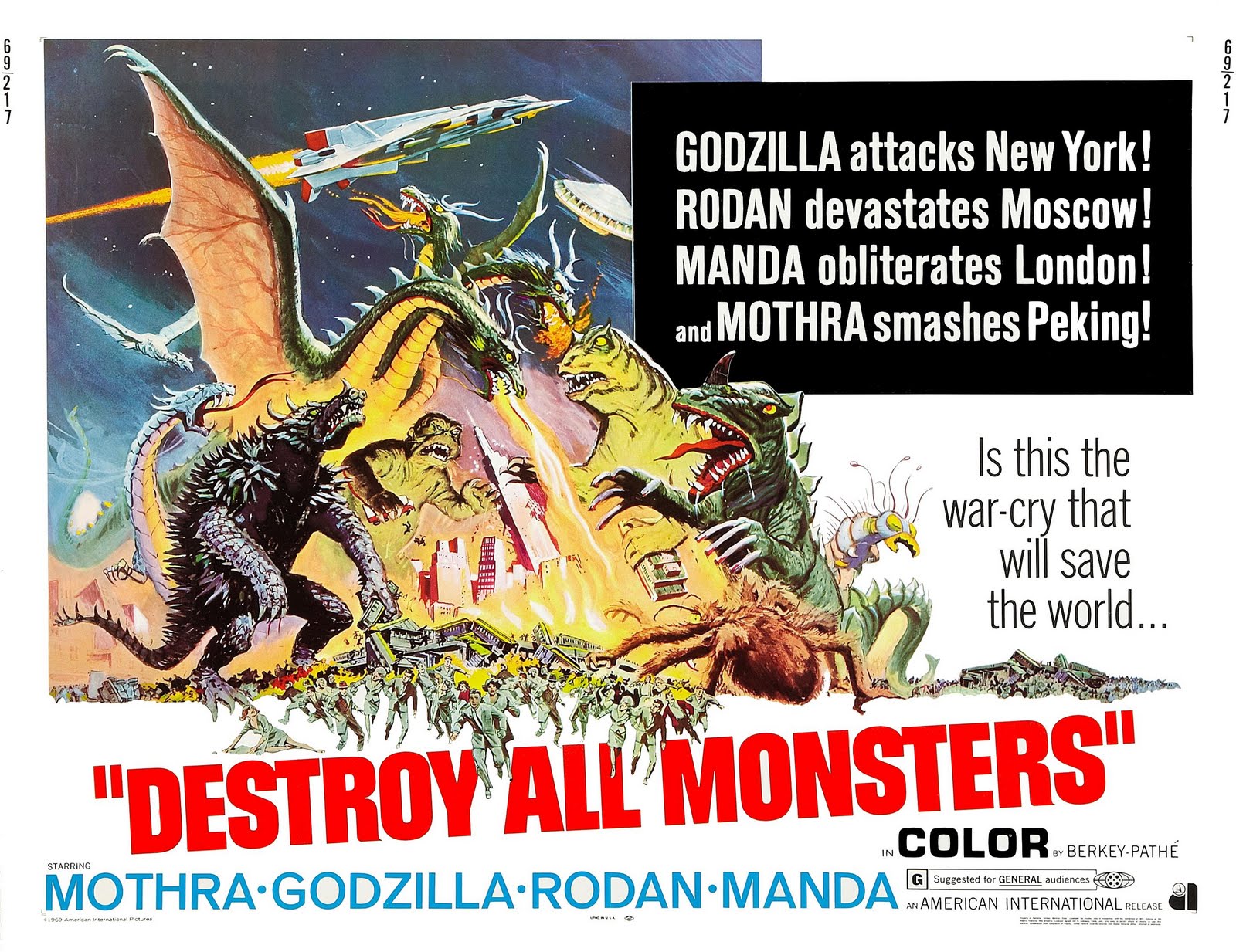 And if those Toho adventures perhaps require the greater leap of collective imagination, especially for more “sophisticated” grown-ups,, then might not the reward be even greater than is generally believed, for those who choose to dream their way onto the landscapes where Godzilla and company unquestionably rule? After grooving on something like Invasion of Astro-Monster, how can the answer possibly be “no”?

(A portion of this post originally appeared in an essay entitled “Seeing and Believing” on my own blog Sergio Leone and the Infield Fly Rule.)