Nicholas Meyer’s first directing effort is a classy science fiction thriller best remembered for a charming romantic angle, and for introducing many of us to the marvelous Mary Steenburgen. Clever storytelling pits Malcolm McDowell against fellow time tripper David Warner, in a fourth-dimensional pursuit of none other than Jack the Ripper. 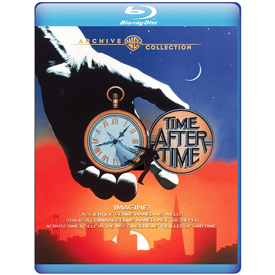 Known for his smart scripts — face it, even Invasion of the Bee Girls is an intelligent script — Nicholas Meyer broke into the writer-director hyphenate league with 1979’s Time After Time. His final screenplay is a science fiction thriller that covers other genre bases as well. With time travel as the springboard, we’re launched into a romance, a comedy, and some sober insights at societal decay (a helluva theme at the present moment). Rather than allocate production resources to fancy special effects, Meyer lets cinema style do the trick. Scenes filmed to take place in 1893 have the lush look of a vintage color period picture. The bulk of the running time is set in contemporary (1979) San Francisco, which is supposed to be decadent but now looks painfully innocent. Time travel stories are in some ways too easy to do. An essay from 1895 was quick to note that a strip of movie film is a time machine: roll it backwards and events go in reverse as well. Meyer’s emotional and intellectual connections span a gulf of ninety years, raising questions that a film like Star Wars never would.

The story by Steve Hayes and Karl Alexander does a narrative pirouette off the precedent of both George Pal’s 1960 The Time Machine and various Victorian fantasies that invent ways for Sherlock Holmes to interact with historical characters, as Nicholas Meyer did for Sigmund Freud three years earlier in his screenplay for The Seven-Per-Cent Solution. As with the George Pal film, H.G. Wells’ The Time Traveler is Herbert George himself (Malcolm McDowell). Just as in the original, Herbert throws a dinner to demonstrate his machine to his friends, but admits that he’s too timid to actually take a test run. But he finds he must when his associate Dr. Stevenson (David Warner) is revealed to be none other than the heinous Jack the Ripper. To escape arrest, Stevenson steals the machine and transports himself to the future. Due to a ‘safety feature,’ the machine returns to Herbert’s home laboratory on its own. Realizing that he’s let a maniac loose on an unsuspecting future, Herbert has no choice but to follow. A convenient ‘replay’ setting takes him right to where Stevenson went: a museum in San Francisco holding an exhibit of H.G. Wells memorabilia… including the Time Machine itself. The curators think it is a mock-up, to help Herbert write his famous novel.

That’s the film’s mechanical time travel idea in a nutshell, and there’s no use debating how goofy it is. Traveling into the future doesn’t take Herbert to exactly where his house stands eighty years in the future, but to another city to where the Time Machine has since been transported. What if the machine had been destroyed in the interim? This ‘time is immutable’ idea gives all historical events a ’twas ever thus’ quality, and supports the notion that nothing can be done about a newspaper from the future that says a particular person will be murdered. I suppose the writers and Meyer could have spent a full reel establishing another rationale to make the story function, but this setup works well enough — it would be six years before Bob Gale and Robert Zemeckis would mine every clever idea and magical irony possible from the Time Travel subgenre, in their incredibly dense (idea-wise) Back to the Future movies. 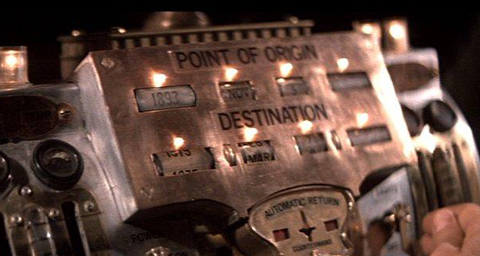 Meyer contents himself to ruminate about which things change and which stay the same in various time periods. The film’s most pleasing sequences show the intelligent Herbert George Wells getting his bearings as a stranger in the strange land of 1979. A shy, peace-loving and essentially decent Londoner, Herbert’s liberal values are unlike those of the real Wells, who talked a good line of radical thought about sexual equality while mistreating his wife and various mistresses. But we like this guy, even though he’s not the two-fisted freedom fighter personified by the much-missed Rod Taylor. In his previous films Malcolm McDowell was variously impish or cheerfully selfish; his charming take on Herbert Wells came just in time. With a minimum of overacting, McDowell’s Wells figures out the future just enough to function, and still be surprised at every turn. You’d think he’d be smart enough to trick Charles Cioffi’s detective into rushing cops to the scene of a crime… but he is under a lot of strain. Sci-fi fantasies in the 1970s were so relentlessly nihilistic that we really want this to have a happy ending. Our investment in Herbert stays strong.

The second of what turn out to be three perfect characterizations is David Warner’s Dr. Stevenson. Holding much in reserve, Warner’s Jack the Ripper exults in his liberation into a world where he can roam free and do what he wishes, as long as he stays sneaky about it: “Do you know that you can just walk in and buy a gun here?” (para.) The film’s dark message is laid out partially in a montage of TV images of violence, war and assassinations. We’re not too happy that political protesters are lumped in with the ‘evil’ content. But Stevenson’s joy to find himself in such a violent place is expressed in perfectly chosen words: “I’m home.” He has more freedom than he ever did to run amuck with his murderous scalpels: “Ninety years ago I was a freak. Today I’m an amateur.” It seems entirely right when Jack the Ripper slips so easily into the groove of hipster anonymity in 1979, in the City by the Bay. The pessimistic conclusion is that Evil is more versatile and adaptable than good? 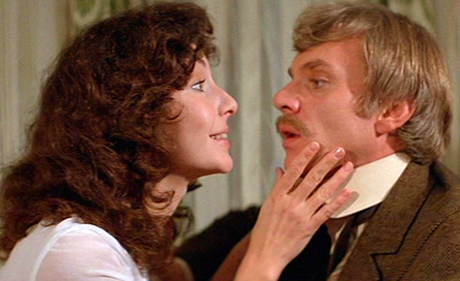 I’ve often thought about what would happen if we could whisk Ben Franklin from 1780 to the present day. Would he get into the swim of cell phones and TV commercials, or would he collapse in mental overload, like Dave Bowman confronted with The Infinite in 2001 – A Space Odyssey? If we could meet an educated Roman of Year 1, A.D., once the language barrier were broken, we’d likely have little trouble relating to each other. The Roman citizen would be basically just like us: concerned about the petty variables in his daily life. Only the technology would be different — the literature proves that men back then could be just as intelligent as we are.

The third and most satisfying part of Time After Time is its romantic aspect. Nicholas Meyer hits a home run with his choice of actress Mary Steenburgen, officially ‘discovered’ in Jack Nicholson’s Goin’ South. As a banker who changes Jack the Ripper’s vintage pound notes into American dollars, Steenburgen’s Amy is an instant hit, an outgoing, plainspoken ‘modern woman’ who roughly fits the description of H.G. Wells’ proposed future female of Free Love. Amy is indeed free and forward and picks Herbert up with an undisguised interest in sex. As endearing as she is liberated, Amy gives must deal with Herbert’s 1893 view of propriety. But sex seems to translate across the years as well. Of course, Amy’s character does function as a standard damsel in distress. When the plot engine reaches Act 3, Stevenson decides to neutralize Herbert by threatening Amy. 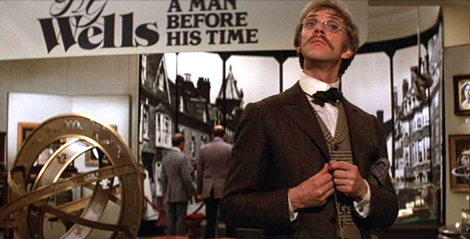 The production is certainly all it needs to be. 1893 London looks great and the design of the Time Machine is unexpected — from some angles it looks like a clumsy Art Nouveau guppy. The optical work to show it moving through time was never anything to get excited about. I won’t go into the arbitrary business of the keys that make the Time Machine do various things — that are difficult to imagine anybody building into a time machine. Alice in Wonderland found pills that made her larger and smaller, but none that banished her to the end of eternity. I should think that the inventor of a working Time Machine would test it really really really carefully before going anywhere in it. Rod Taylor in the George Pal version zips off to the future without even taking along a toolbox. Sure, the machine goes into the future just swell. But how can he be so certain that it’s going to come back — we don’t see him testing the reverse gear.

Time After Time carries a potent nostalgic kick, emphasized by Miklos Rozsa’s intense romantic score. The lush orchestral compositions were slightly anachronistic for the late ’70s, when synthesizer scores were big. One could also argue that it doesn’t express 1979 San Francisco. I think the music works because it reinforces the script’s welcome admonition that love makes the world go around, or at least forwards and backwards on the calendar. Few details matter when Herbert and Amy are desperately trying to stay together, and stay alive. That’s when the Rozsa score really kicks in, delivering strong jolts to the emotions. As in his The Private Life of Sherlock Holmes, Rozsa’s best passages are truly moving, heart-wringing.

Time After Time was nominated for zero Oscars. The picture is not cutting edge and it isn’t crammed with radical thought, but it sure is entertaining. I didn’t see it in a theater, yet I can imagine audiences applauding at the conclusion.

The Warner Archive Collection Blu-ray of Time After Time is a terrific HD encoding of this handsome picture. If you’ve only seen it pan-scanned on old TV broadcasts it’ll be a pleasant surprise here. San Francisco is all zooms and modern architecture and some really romantic images captured in colorful Panavision. This was one of Miklos Rozsa’s last film scores, and the music really pops out. The credits list Virginia Majewski playing the viola. I feel like starting a fan club for her, after hearing her work on the soundtrack for On Dangerous Ground. Repeated from an older DVD is a commentary with Nicholas Meyer and Malcolm McDowell, and a trailer is present as well.

Did Nicholas Meyer miscalculate in one scene? When I first saw the film, I thought a single crime-scene shot showing a severed hand was completely uncalled for. But perhaps Meyer felt he needed to stun us with a stronger Ripper threat. Anyway, I was enjoying the film’s genteel thrills when this rather unexpected bit of hardcore gore popped up. I now chalk it up to my own prejudices. Anyway, today’s TV shows have much more explicit gore than this.*

[ * Note from Gary Teetzel, 11.12.16: “In response to your observation that ‘today’s TV shows have much more explicit gore than this’: Last Monday, at 8:00 PM, the TV show Gotham, about the early years of Bruce Wayne, Jim Not-Yet-Commissioner Gordon and everyone’s favorite band of merry villains, they showed a bloody severed head, a bloody severed arm and a chopped-up torso. All this at 8:00 PM in a show that will attract children. At the same time, on the TV show Supergirl, there was a discreetly handled subplot about Supergirl’s adoptive sister coming to realize that she is attracted to another woman. The storyline focused on her feelings; there wasn’t even a kiss shown. Heck, not even holding hands. Guess which one of these two things prompted numerous complaints on Facebook, and which wasn’t even mentioned at all? — Gary” ]