This ‘dawn of sound’ classic from Josef Sternberg is an important early entry in the gangster genre, a romanticized tale of urban crime with little violence but a full measure of romantic revenge. Star George Bancroft is the title underworld kingpin, who risks everything to hold his girlfriend Fay Wray the way he holds onto power — with his fists and with his gun. The highly sentimental story has some odd ideas about prison rules on Death Row; although packed with ‘Sternbergian’ touches the visuals aren’t as overtly poetic as is his norm. It’s an interesting study from the first year of ‘all talkie’ pictures: the audio is highly creative but the dialogue delivery is slow — perfect for anyone learning English! 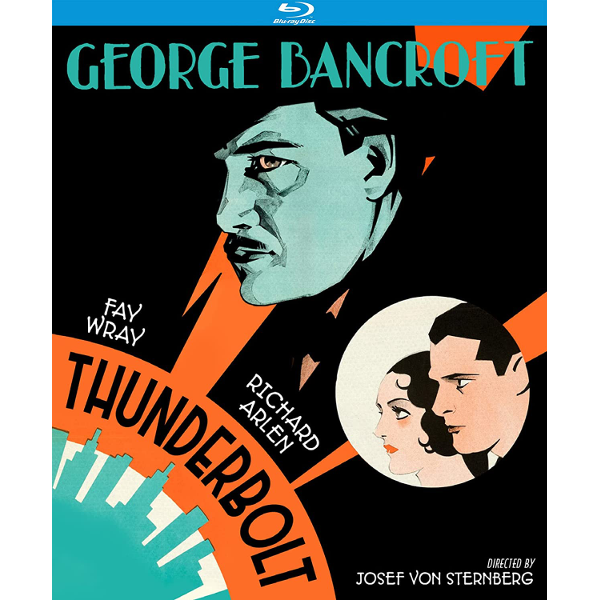 My first inclination is to label the ‘all talkie’ Paramount picture Thunderbolt a rarity, but it might just be coincidental that I never connected with it through the UCLA Archive, repertory theaters or museum screenings. This nicely remastered Blu-ray is an opportunity to probe the baby steps taken by the modern gangster genre while also admiring the tough-guy style of George Bancroft. He plays a handsome, semi-admirable gang leader; just a couple of years later Bancroft would be demoted to special supporting roles, and not always as crooks and thugs.

Richard Arlen has a collegiate profile and a decent delivery, even if none of the acting here goes beyond stage pantomime. Sternberg modulates all the performances and is perhaps responsible for sl-o-w-ing down some of the speeches by Bancroft. It’s also fun to glom the gorgeous Fay Wray, four years before immortality came her way in Kong. She’s all of 21 or 22 … and had made her first film at age sixteen.

Top writers worked on the screenplay, and it’s said that Joe Mankiewicz wrote the inter-titles for the simultaneously-released silent version.  Rouben Mamoulian received a lot of credit for early-talkie audio innovations, finding ways to record live sound in odd situations. Von Sternberg should be praised for his casual, natural use of sound. He uses audio to skip over standard cutaways to things like clocks — we hear the pealing bell, can assume a church is nearby and don’t need to see it. A great deal of dialogue is heard from offscreen, which makes good sense in the prison scenes. People talk when their faces are turned away from the camera. In 1929, such obvious things weren’t taken for granted. In the most quoted audio construction, the end of a nightclub raid is a cacophony of shouts and noises, but the scene is played on a close-up of Fay Wray, who is doing her best to tune it all out.

The basic dramatic conceit  romanticizes a notorious criminal in a highly inaccurate picture of urban crime — the later pictures with Edward G. Robinson, James Cagney and even Paul Muni were the ones to add a full dose of topical realism. Hoodlum chieftain Jim Lang / Jim Carson is commonly known by the name “Thunderbolt” because one punch from his right fist drops any opponent cold. As Public Enemy #1 he’s wanted for numerous crimes including murder, yet brazenly appears in public to enjoy the company of his #1 girlfriend Ritzie (Fay Wray). When Ritzie was first involved with Thunderbolt it excited her to know he was risking his freedom to be with her. But now she wants out, to marry the straight-arrow bank teller Bob Moran (Richard Arlen).

The ruthless killer Thunderbolt barely escapes a police raid at the Black Cat club, only to be captured because he befriends a stray dog.  Bob Moran loses his job when rumors circulate that his fianceé has underworld ties. After the mob lieutenant ‘Snapper’ (James Spottswood) brings word of the Ritzie’s secret romance, Thunderbolt personally moves to kill Bob and reclaim Ritzie. He’s instead caught, convicted of an earlier murder and sent to languish on Death Row, where a lively bunch of likewise condemned prisoners is overseen by the nervous Warden (Tully Marshall). But Thunderbolt will have his revenge: he arranges for his gang to get Bob Moran to return to his bank during a robbery so he can be framed for murder. Locked up right across from the vicious Thunderbolt on Death Row, Bob must watch as his nemesis refuses to admit the frame, even after Ritzie and Bob’s mother (Eugenie Besserer) personally plead for his life.

Although filmed in a less ornate style than Sternberg’s Underworld or The Docks of New York, the strikingly titled Thunderbolt is smartly directed and loaded with directorial touches. The first shot shows a black cat crossing the young lovers’ path. The second scene is a set piece interrogation in which the supposedly sweet and innocent Ritzie refuses to inform on Thunderbolt. About a dozen detectives surround her perch-like chair, an ideal arrangement to admire her legs and fancy fur, not extract information. The scene is also embarrassingly laden with exposition: the interrogator learns nothing from Ritzie and instead tells her plenty. We note that Wray looks great but does not receive the same lavish visuals bestowed upon the earlier Betty Compson or of course Marlene Dietrich, in von Sternberg’s very next picture.

The Black Cat Club is packed with stereotyped African-Americans, from the timid waiter to patrons that shudder at the thought of Thunderbolt’s fists. But there’s also an atypically sassy, insolent hat check girl. Thunderbolt rules the roost, insulting the floozie at an adjoining table and cold-cocking a mug who gets in his face — all to establish his toughness without involving him in any real crime scenes. The added benefit is seeing young Theresa Harris — unbilled in her first movie — belting out a great song. (↓) This likely is meant to be The Cotton Club even though blacks are allowed in as customers — it does feature a chorus of scantily-clad black dancers.

Most of the film’s second half takes place on Death Row, with new arrival Thunderbolt throwing his weight around and proving how tough he is. We do cut away to see Bob being framed at the bank; I didn’t catch a shot of anybody being shot to justify the murder rap that lands Bob on Death Row too. Ritzie shows up to beg her old boyfriend for mercy, and to marry Bob through the prison bars, a scant four hours before his scheduled execution.

This is one screwy prison. Another inmate goes nuts, a guy known as Bad Al Freeburg, ‘The Machine Gun Terror’ (Fred Kohler of Deluge). The warden allows the even more dangerous Thunderbolt to leave his cell and disarm him. Thunderbolt puts Bad Al in his place: “You mean Squirt Gun Al!”  From that point on Thunderbolt earns special favors, and the Warden even allows his stray dog pal to live with him. This is milked for instant sentimentality: yeah, the vengeance-obsessed Thunderbolt loves seeing the innocent Bob prepped for the executioner, but who can hate a guy who loves a dog?  Even Ritzie goes soft: “You were a killer but you’re always fair.” When I’m up for Murder One, I want Ritzie on my jury.

But like they say in L.A. Confidential anything can happen — this is Hollywood!    Thunderbolt appears to be transformed into a nice guy — but is he letting Bob off the hook just so he can kill him with his own bare hands, as he threatened?  The rather drawn-out ending milks all the drama and pathos it can from this. Bancroft was reportedly nominated for a Best Actor Oscar in a strange year with no official nominees.

We spend almost as much time with comedy bits — black humor on Death Row — as we do with the impending tragedy. Tully Marshall’s Warden gets in some rather good gags. One condemned prisoner says he doesn’t like the string quartet that performs for the cell block: “I don’t want to listen to that — aw, I’m sorry I ever came here.”

Music works into many scenes; as sound editing was in an embryonic stage at this time we wonder what tricks Sternberg’s engineers used to get clean audio when singers or a piano player perform. Was it all live recording done on the set?  An out-of-tune piano motivates a rather pointed remark about the class of criminal found on Death Row: “I wish there were a way of telling when a human being is out of tune.”

Thunderbolt gets to make an exit fit for a king, a full reel devoted to farewells, payoffs for earlier comic gags and of course a heartfelt one-on-one talk with Bob Moran. Don’t hang the man, run him for political office.

Bancroft’s star performance is interesting, but today the film will probably most appeal to confirmed cinephiles that dote on historical details in genre films: the gangster conventions here are more like ‘3 Penny Opera’ than Public Enemy. Modern audiences may grow impatient with many of the extremely slow line readings. Did von Sternberg perhaps think that a somber line delivered at a glacier pace made the words more important?  Sternberg (and every other director) would soon be working with dialogue delivered more naturally. 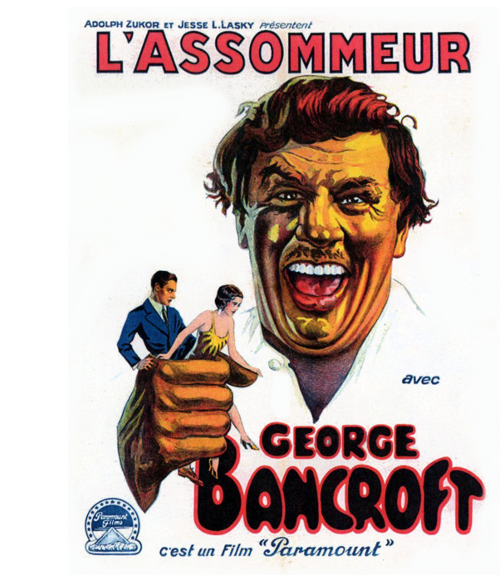 The KL Studio Classics Blu-ray of Thunderbolt is a fine transfer of this ancient item (92 years old!). The cinematography doesn’t have the artsy, finessed sheen of Sternberg’s Docks of New York but it’s still very attractive. I never saw a prime-quality print so don’t know if the encoding on view is an appreciable improvement — it looks fine to me. Only part of one reel has a number of dark scratches; it’s possible that this remastered copy is from surviving positive prints. The audio track is extremely clear — free of the kind of hiss and crackle we expect in a 1929 picture. All of the dialogue is rich and sonorous, and more naturally mixed with sound effects than we hear in Sternberg’s Berlin-filmed The Blue Angel, made the next year.

Audio commentator Nick Pinkerton gives us a full-feature talk that doesn’t waste time — it’s facts and smart observations non-stop, like the comments on sound effects. Some of his lengthy actor bios are choice, especially when he dispenses facts about Theresa Harris and Oscar Smith of The Black Cat Club. I trust Pinkerton because he doesn’t pretend to know everything — when he can’t positively identify an actor he says so, and explains why he’s uncertain.

One last thought: The French title is apparently L’Assommeur,’ which Google Translate tells means ‘The Knocker.’ ↑  Perhaps that’s  a figurative description of the way he knocks people out cold?  Another last thought: in his prison cell Thunderbolt and his mutt play with a doggie ball shaped like a cartoon cat’s head. Could it  be a ‘Felix the Cat’ tie-in toy?