It’s just like the film industry, I tell ya!  Director Jules Dassin teams with writer A.I. Bezzerides for one of filmdom’s strongest slams at the free market system. Trucker Richard Conte fights back when cheated and robbed by Lee J. Cobb’s racketeering produce czar. 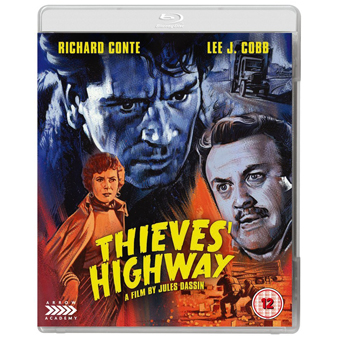 Did Jules Dassin initiate his string of studio produced films noirs, each of which has a strong element of social criticism, if not outright condemnation of ‘the system?’  His Hellinger movies Brute Force and The Naked City mix visual poetry and proletarian protest.  The prison film oversells ‘the fury of men caged by fate’ while the superb NYC police procedural proposes that the greedy rich bear much of the guilt for the city’s murder rate.  By the final reel the actual vicious killer seems a ‘victim of society’ as well.  Dassin’s Night and the City is split between abstract expressionism and a dissection of the nocturnal corruption of the London underworld, where a fool determines to beat the system at its own dirty game.  But the one picture that can be called a direct attack on the institution of the capitalistic free market is 1949’s Thieves’ Highway. It bares some honest truths about making a living at the lower end of the entrepreneurial scale. Independent truckers try not to be swindled by a crooked produce wholesaler, a situation that firebrand writer A.I. Bezzerides’s knew well in real life. Even in this cleaned-up version, ‘Buzz’ Bezzerides indicts a system where sharp business practices can run wild. 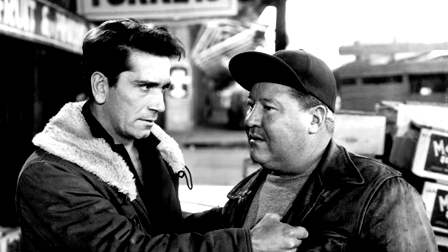 By 1949 the HUAC witch hunters were well into their wholesale blacklisting of Hollywood talent open to attack for their leftist politics. Bezzerides was not a leftist, but his view of ordinary business as a dirty racket is second to none. As in the similar films Try and Get Me! and The Breaking Point, no direct claim is made that the racketeer of Thieves’ Highway is endemic or even typical.  But the average viewer can easily jump to the conclusion that every rung in the capitalist economic ladder is rigged in favor of the established few.

Unlike the other films, Thieves’ Highway is neither hysterical nor defeatist about the struggle to succeed in a tough economic system. It’s also not a standard David vs. Goliath story, as our likeable hero’s idealism isn’t nearly powerful enough to prevail over organized thievery.  As in all of Jules Dassin’s dramas, real-life dilemmas have no simple solutions. 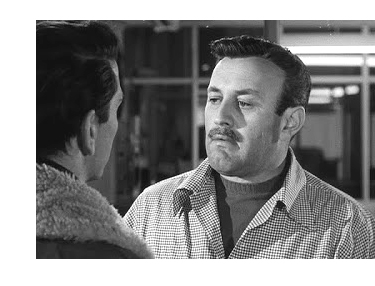 The struggle takes place in the lower working class of our classless society. Sailor Nico Garcos (Richard Conte) returns from a voyage to find his father a cripple, maimed in a suspicious trucking accident after being stiffed in a business deal by sharpie produce wholesaler Mike Figlia (Lee J. Cobb). Using his savings, Nico partners with the experienced Ed Prentiss (Millard Mitchell), to profit by hauling an early-season load of desirable golden delicious apples. Nico takes offense at Ed’s hardball business philosophy but learns that he’s a loyal partner. When he gets his load to market Nico runs headlong into Figlia’s cheap tricks. The boss knocks the price down, and claims that the truckers are under his control. Local B-girl Rica (Valentina Cortese) also seems to be part of Figlia’s scheme. Nico does get some cash from the deal. He happily calls his fiancée Polly (Barbara Lawrence) to come for a fast wedding, not realizing he’s already in Figlia’s trap.

A superior thriller with powerhouse acting from underrated stars Richard Conte and Lee J. Cobb, Thieves’ Highway places its story among the immigrant poor. It specifically identifies its characters as partially assimilated Greeks, Italians and Poles. Learning the ropes of a new country is a series of hard knocks. Nico Garcos sees himself as a tough guy unlikely to fall for the same tricks as his gullible father. Robbed of his legs, the old man sits in a wheelchair, in denial of the fact that he’s been robbed. 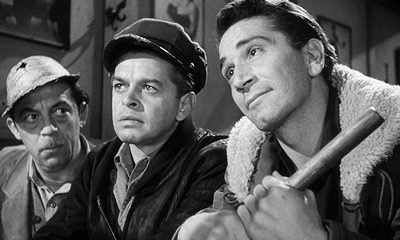 Bezzerides captures perfectly the tawdry power dynamics of face-to-face verbal business deals. Nico threatens to repossess Ed’s truck, but five minutes later becomes his partner.  America is the land of opportunity but also a place of risk and betrayal. Ed has little choice but to slam the door on his previous partners Slob and Pete (Jack Oakie and Joseph Pevney). The judgmental Nico makes a note of Ed’s disloyalty to his old buddies.  Later, he forces Ed to deal straight with the Polish growers who fill their rickety truck with precious but perishable apples.

The high risk of the highway is yet another factor. Nico has a new Army surplus vehicle but Ed’s truck is an ancient death trap that barely stays in one piece. Nico is an experienced ship’s engineer but makes an almost fatal mistake while changing a tire. Ed shows his true loyalty by rescuing Nico, placing their partnership above personal advantage. 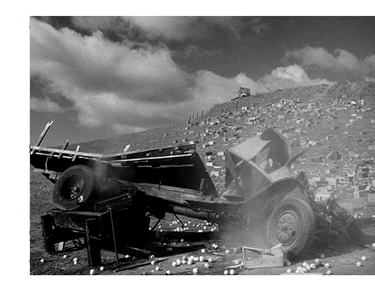 But Nico must face eventually face Figlia alone. His refusal to be intimidated doesn’t help when Figlia’s cronies play dirty tricks like axing Nico’s tires. Without Ed around to present a united front, Nico is sidetracked by Rica (“Come on up to my room…”) while Figlia brazenly sells his apples right off the back of his truck. Rica eventually switches loyalties to Nico’s side, as the film moves into its violent set pieces. The most noted action scene is capped by a famous shot of hundreds of apples tumbling down a steep hill.

The movie dramatizes the tyranny of economic power. Nico is weak only because he’s one man against the rackets. Because they compete with one another, he, Ed and Ed’s ex-partners Slob and Pete are easy prey for Figlia’s operatives to pick off one by one. Thieves’ Highway never mentions unions, but the look of Judas-like shame on Pete’s face as Figlia patronizes him with a rotten handout job tells it all. I can see the Teamsters loving this picture even more than writer Bezzerides’ older trucker-hero picture, Warners’ They Drive By Night.

Thieves’ Highway also strikes a blow for a sliding scale of heroism. Nico wants to make a buck, avenge his dad and marry his sweetheart, so he’s an obvious identification figure. Ed isn’t as glamorous and we don’t see his family. We’re encouraged to judge him by his willingness to cheat the Polish apple growers. But Bezzerides and Dassin don’t require that all good men act like saints all the time. Not only is Ed a stand-up guy when things get tough, he has the experience in dealing with crooked racketeers that Nico sorely lacks.

Finally, Thieves’ Highway has the gall to overturn an old racist Hollywood custom. White-bread Polly (beautiful blonde Barbara Lawrence, later of Kronos) is the standard MPAA reward for middle-class heroes. Her opposite is the dark, foreign, immigrant (coded) prostitute Rica. Even in 1949, the Production Code would prefer Rica to die in a classy last-minute sacrifice to save the hero. That’s what happens to Linda Darnell in My Darling Clementine, and also Debra Paget, in the next year’s Broken Arrow (the James Stewart western).  Screenwriter Bezzerides instead has Polly see Nico with Rica, jump to conclusions and immediately stomp out of her engagement. When she learns that Nico’s bankroll has been stolen, it’s the last straw. Polly doesn’t want Nick, she wants the American bridal package deluxe. Sam Fuller must have loved that scene, and loved the Rica character, a woman with guts. 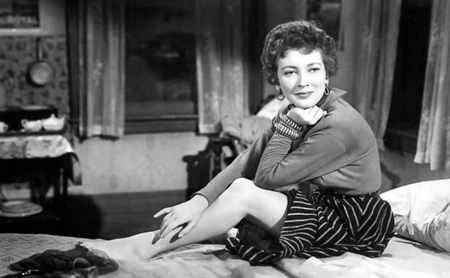 Savant wishes that Thieves’ Highway were perfect, but it isn’t. As Jules Dassin has explained, Fox production chief Darryl F. Zanuck ordered the ending re-shot after Dassin left the picture. It’s one of the worst examples of movie futzing on record. (spoiler) Nico has lost his money, his apples, and his partner.  A fight breaks out in a roadside café and the picture wraps up with a bunch of ridiculous non-sequitur events. The cops arrive to arrest Figlia, as if the non-existent law has been preparing a case against him all this time. They deliver a stern authoritarian speech to Nico about not taking the law into his own hands. Two or three shots later, Nico and Rica are a happily married couple, her sins magically transformed into bliss by the love of a good man.

Even with the welcome twist of the dark woman getting the man, this ending is pretty insulting. I talked to the outspoken A.I. Bezzerides about this on the phone in 1997 and he was still furious about it. Director Dassin and Darryl Zanuck apparently resolved their differences about this incident, because in the next couple of years Zanuck became a champion of blacklist-threatened writers and directors and the best friend Dassin ever had in Hollywood.

Richard Conte is excellent in his scenes with Lee J. Cobb, giving their  ‘bluff & threaten’ negotiations fine levels of complexity. Favorite Valentina Cortese is a fine bad girl, and Mitchell, Pevney and especially Jack Oakie sketch solid characters with limited screen time. The atmospheric locations add greatly to the story. Just about the only dated aspect of the film is the actual truck crash, which nowadays would be the most realistic part of the movie. Dassin compensates with that poetic image of total ruin, the cascade of apples down the hill. 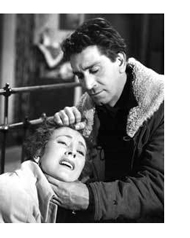 Arrow Video’s Region B Blu-ray + PAL DVD of Thieves’ Highway is an excellent HD transfer of this rich B&W picture. Much of it was filmed on location in Oakland, Sebastapol and in the actual wholesale markets of San Francisco. Cameraman Norbert Brodine shot Fox’s celebrated docu-realist noir pictures The House on 92nd Street and Boomerang!, and here he provides another mix of authentic-looking locations and carefully lit interiors. These Fox noirs burst into new power in HD. it’s like watching the old studio prints back at UCLA.

Criterion’s old (2004) DVD has excellent extras that will probably be retained when a domestic disc is offered — a then-new interview with Jules Dassin, and a typically incisive academic commentary by noir authorities Alain Silver and James Ursini. But Arrow’s alternate extras are very good as well. Included in its entirely is the 55-minute video documentary The Long Haul of A.I. Bezzerides, in which the author talks about his career and life from his house outside of Los Angeles. 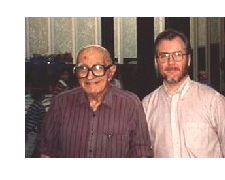 (The Bezzerides we meet in the docu is exactly the one I talked to for hours in 1997. Bezzerides lectured me several times on the Jung statement he was fond of quoting, “There can be no birth of consciousness without pain.” Unfortunately, Bezzerides’ invitations to drive out and see him were curbed by other writers that were helping to take care of him and publish some of his work: they were wary of poachers, I suppose. I did get to talk more with Bezzerides, his very nice lady friend and one of his younger writer associates, a very nice guy, at the re-premiere of Kiss Me Deadly.)

Arrow’s new academic extras are from author Frank Krutnik. His long video essay The Fruits of Labor is an illustrated lecture. He also provides a partial commentary for three major scenes.

All of the extras are duplicated on the second DVD disc in Arrow’s keep case. A trailer is present as well, and Arrow gives the package a choice reversible artwork, new or original. A nicely illustrated booklet contains a good essay by Alistair Phillips. Writing on film noir is hotly contested territory, and it is nice to hear from more experts than just the ‘usual suspects.’