John Ford’s best war movie does a flip-flop on the propaganda norm. It’s about men that must hold the line in defeat and retreat, that are ordered to lay down a sacrifice play while someone else gets to hit the home runs. Robert Montgomery, John Wayne and Donna Reed are excellent, as is the recreation of the Navy’s daring sideshow tactic in the Pacific Theater, the ‘speeding coffin’ Patrol Torpedo boats. 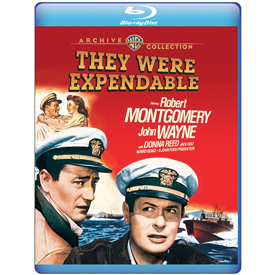 They Were Expendable has always been appreciated, but hasn’t been given a high roost in John Ford’s filmography. Yet it’s one of his most personal movies, and for a story set in the military service, his most serious. We’re given plenty of service humor and even more sentimentality — and even a sing-along scene like those that would figure in the director’s later cavalry pictures. Yet the tone is heavier, more resolutely downbeat. The war had not yet ended as this show went before the cameras, yet Ford’s aim is to commemorate the sacrifices, not wave a victory flag. 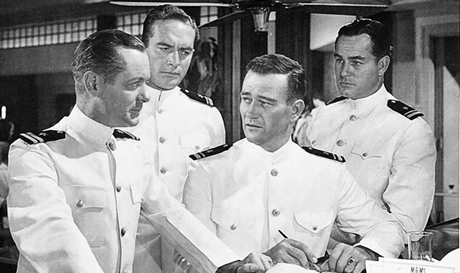 By 1945 Hollywood was already rushing its last ‘We’re at War!’ morale boosters out the gate and gearing up for production in a postwar world. A pet project of legendary director John Ford, They Were Expendable is his personal tribute to the Navy. Typical for Ford, he chose for his subject not some glorious victory or idealized combat, but instead a thankless losing struggle.

Beginning on December 7, 1941, They Were Expendable traces the true story of an experimental Patrol Torpedo Boat unit run by Lt. John Brickley (Robert Montgomery), his ambitious second in command Lt. Ryan (John Wayne) and their five boat crews. The ambience is pure Ford family casting: the ever-present Ward Bond and Jack Pennick are there, along with youthful MGM newcomers Marshall Thompson (It! The Terror from Beyond Space and Cameron Mitchell (Garden of Evil, Blood and Black Lace) being treated as new members of the Ford acting family. Along the way Ryan meets nurse Sandy Davyss (Donna Reed). Despite their battle successes the PT unit suffers casualties and loses boats as the Philippine campaign rapidly collapses around them. Indicative of the unusual level of realism is the Wayne/Reed romance, which falls victim to events in a very un-glamorous way.

There’s nothing second-rate about this Ford picture. It is by far his best war film and is as deeply felt as his strongest westerns. His emotional attachment to American History is applied to events only four years past. The pace is fast but Expendable takes its time to linger on telling character details. The entertainer that responds to the war announcement by singing “My Country ’tis of Thee” is Asian, perhaps even Japanese; she’s given an unusually sensitive close-up at a time when all Hollywood references to the Japanese were negative, or worse. 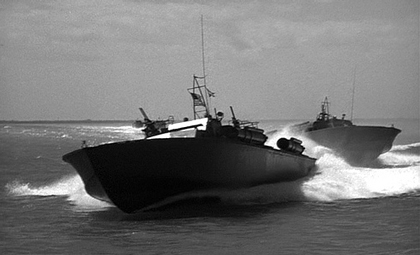 MGM gives Ford’s shoot excellent production values, with filming in Florida more than adequate to represent the Philippines. Even when studio bound Ford’s show is free of the MGM gloss that makes movies like its Bataan look so phony. We see six real PT boats in action. The basic effect to show them speeding through exploding shells appears to be accomplished by pyrotechnic devices – fireworks — launched from the boat deck. Excellent miniatures represent the large Japanese ships they attack. MGM’s experts make the exploding models look spectacular.

Ford’s sentimentality for Navy tradition and the camaraderie of the service are as strong as ever. Although we see a couple of battles, the film is really a series of encounters and farewells, with boats not coming back and images of sailors that gaze out to sea while waxing nostalgic about the Arizona lost at Pearl Harbor. The image of civilian boat builder Russell Simpson awaiting invasion alone with only a rifle and a jug of moonshine purposely references Ford’s earlier The Grapes of Wrath. Simpson played an Okie in that film and Ford stresses the association by playing “Red River Valley” on the soundtrack. It’s as if the invading Japanese were bankers come to boot Simpson off his land.

Equally moving is the face of Jack Holt’s jut-jawed Army officer. He’d been playing basically the same crusty serviceman character for twenty years; because audiences had never seen Holt in a ‘losing’ role the actor makes this defeat seem all the more serious. The irony is that in real life, immediately after Pearl Harbor, Holt was so panicked by invasion fears that he sold his Malibu beach home at a fraction of its value. Who bought it? According to Joel Siegel in his book The Reality of Terror, it was RKO producer Val Lewton. 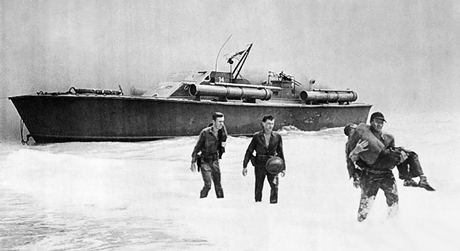 John Wayne is particularly good in this film by virtue of not being its star. Wayne’s character turn as an impatient but tough Lieutenant stuck in a career dead-end is one of his best. The real star of the film is Robert Montgomery, who before the war was known mostly for light comedies like the delightful Here Comes Mr. Jordan. Montgomery’s Brickley is a man of dignity and dedication trying to do a decent job no matter how hopeless or frustrating his situation gets. Whereas Wayne was a Hollywood soldier, Montgomery actually fought in PT boats in the Pacific. When he stands exhausted in tropic shorts, keeping up appearances when everything is going wrong, he looks like the genuine article.

Third-billed Donna Reed turns what might have been ‘the girl in the picture’ into something special. An Army nurse who takes care of Wayne’s Ryan in a deep-tunnel dispensary while bombs burst overhead, Reed’s Lt. Davyss is one of Ford’s adored women living in danger, like Anne Bancroft’s China doctor in 7 Women. A little earlier in the war, the films So Proudly We Hail and Cry ‘Havoc’ saluted the ‘Angels of Bataan’ that stayed on the job knowing they would be captured by the Japanese. Expendable has none of the sensational subtext of the earlier films, where the nurses worry about being raped, etc.. We instead see a perfect girl next door (George Bailey thought so) bravely soldiering on, and saying a rushed goodbye to Wayne’s Lt. Ryan over a field telephone. Exactly what happens to her is not known. Even more than Clarence Brown’s The Human Comedy this film fully established Ms. Reed’s acting credentials. 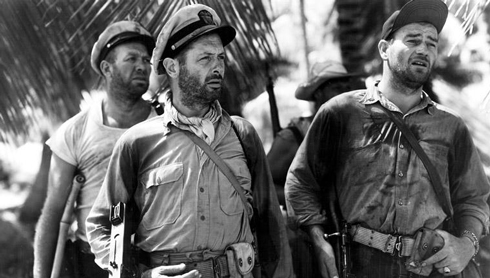 The quality that separates They Were Expendable from all but a few wartime films is its championing of a kind of glory that doesn’t come from gaudy victories. Hopelessly outnumbered and outgunned, the Navy, Army and Air Corps units in the Northern Philippines that weren’t wiped out in the first attacks, had to be abandoned. The key scene sees Lt. Brickley asking his commanding officer for positive orders to attack the enemy. He’s instead ‘given the score’ in baseball terms. In a ball club, some players don’t get to hit home runs. The manager instead tells them to sacrifice, to lay down a bunt. Brickley’s PT squadron will be supporting the retreat as best it can and for long as it can, without relief or rescue. Half a year later, the U.S. would be able to field an Army and a Navy that could take the offensive. But in the here and now, Brickley must make the most of a fight he can’t win. His unit is a quiet study of honorable men at war, doing their best in the face of disaster.

John Ford said that Expendable could have been better. He reportedly didn’t hang around to help with the final cut and the audio mix, and the MGM departments finished the film without him. Although Ford’s many thoughtful close-ups and beautifully drawn-out dramatic moments are allowed to play out, a couple of the battle scenes go on too long, making the constant peppering of flak bursts over the PT boats look far too artificial. Real shell bursts aren’t just a flash and smoke; if they were that close the wooden boats would be splattered with shrapnel. The overused effect reminds me of the ‘Pigpen’ character in older Peanuts cartoons, if he walked around accompanied by explosions instead of a cloud of dust.

The music score is also unsubtle, reaching for upbeat glory too often and too loudly. The main march theme says ‘Hooray Navy’ even in scenes playing for other moods. Would Ford have asked for it to be dialed back a bit, or perhaps removed from some scenes altogether? That’s hard to say. The director liked his movie scores to reflect obvious sentiments. But a few of his more powerful moments play without music.

We’re told that one of the un-credited writers on the film was Norman Corwin, and that Robert Montgomery directed some scenes after John Ford broke his leg on the set. They Were Expendable is one of the finest of war films and a solid introduction to classic John Ford. 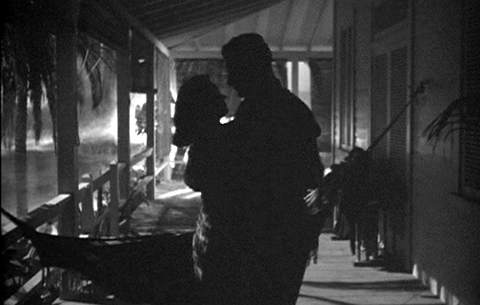 The Warner Archive Collection Blu-ray of They Were Expendable looks as good as the excellent 35mm copies we saw back at UCLA. This movie has always been great on a screen, but previous DVDs were unsteady in the first reel, perhaps because of film shrinkage. The Blu-ray corrects the problem entirely. The B&W cinematography has some of the most stylized visuals in a war film. Emphasizing gloom and expressing the lack of security, many scenes are played in silhouette or with very low-key illumination, especially a pair of party scenes. Donna Reed appears to wear almost no makeup but only seems more naturally beautiful in the un-glamorous but ennobling lighting schemes. These the disc captures perfectly.

Just as on the old MGM and Warners DVDs the trailer is the only extra. We’re told that MGM shoved the film out the door because victory-happy moviegoers were sick of war movies and wanted to see bright musicals. The trailer reflects the lack of enthusiasm — it’s basically two actor name runs and a few action shots. The feature has a choice of subtitles, in English, French and Spanish.