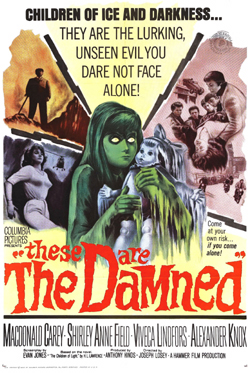 These are the Damned

Fascinating mixture of science fiction and social comment from Hammer Films circa 1961. This bleak but moving atomic parable still packs a punch and was finally released uncut on DVD over 40 years after its truncated theatrical release. Oliver Reed’s role was reputedly one of the inspirations for Anthony Burgess to write A Clockwork Orange.