These are the Eyes that Satirize! Everybody’s seen their imagery but few know the story of these anonymous performance artists and their avant-garde music. Their highly creative songs and videos satirize the commercialization of art and music, and they’ve chosen a real ‘you’ll never get rich’ way to stay clear of the commercial undertow. 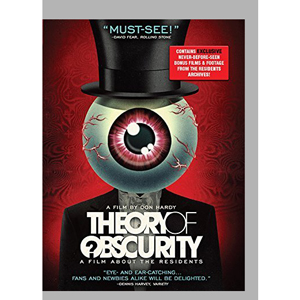 We’ve all seen the image: four tuxedoed men in eyeball masks with top hats and canes. These masked men are the avant-garde band and multimedia performance artists known as The Residents.

The Residents’ reign spans fifty years and has produced over sixty albums and numerous music videos. During that period they have collected a large, international fan base. A collective group without individual personalities, little is known about them because their history has been intentionally obfuscated by the group itself and by their overarching aesthetic, functional anonymity. The title Theory of Obscurity: A Film About The Residents puts this defining principle right up front. No one can say with authority who were the founding members or how many of the original members remain with the group today. And because Theory of Obscurity does not disclose this information, we may never know.

The story of The Residents is told by other rock musicians and performing celebrities, with more input from self-described businessmen and others that assisted the artists along the way. The anonymity angle is a game that most viewers can figure out for themselves. This much of the group’s history is known: in the late ‘sixties four multimedia artists from the Shreveport, Louisiana area decided that the South was not the place to be. The Mecca of San Francisco was calling, with its hippies, drugs, free love, and general lack of boundaries. The founding members ended up living together in a house that became a communal studio to facilitate the production of art with a capital A. As a group they originally intended to become avant-garde filmmakers. Using the mixed media of 16mm film and early consumer videotape, the four produced uniquely quirky, dark, and humorous videos that evoked the ornate fantasies of Méliès, Cocteau, and German Expressionism. The Residents composed electronic soundscapes, songs, and complex sound collages to amplify their vision of strangeness. For the receptive audiences in San Francisco in the early 1970s, The Residents’ sound and vision filled a void as had no other group before them.

They found that video and film production was too expensive. Although they constructed fanciful sets and costumes for their visuals, the chosen medium of early half-inch reel-to-reel video just wasn’t up to the task. At that point their emphasis shifted to music production with a strong visual sense in support. They were stopped neither by a lack of musical ability nor professional resources. Their early records were recorded on consumer equipment.

The group name came from the shipping label used by Warner Bros. Music when their demo tapes were returned, which just said ‘Residents’ with an address. The group had erroneously assumed that Warners would welcome them, because it had signed Captain Beefheart. The group then formed its own label, Ralph Records, and began a highly prolific music business on the artistic fringe. Everything was done on a DIY crafts level, even the printing on their record jackets. 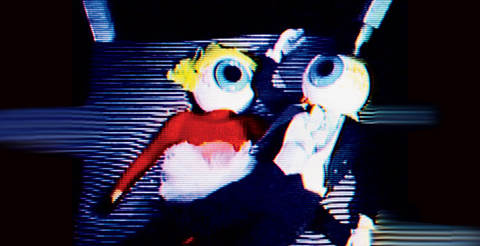 Although operating completely outside the music industry, The Residents have been a noted presence for more than four decades. Their early videos played in rotation on MTV for years. Their music has influenced bands like Talking Heads, Devo, Primus, Ween, Half Japanese, and The Art of Noise. They’ve been taken seriously by the art world, for the entire The Residents collection is now housed in the Museum of Modern Art.

The documentary doesn’t get very deep into The Residents’ music, the appeal of which is fully present in one of their LP records, The Third Reich and Roll (1976). This album contains two long pastiches of various popular songs of the early 1970s. Many of the tunes are thoroughly mangled under layers of sound. At best, a single line from a song may be intelligible. [ Full lists of the hijacked songs are here. ] The Residents use the song references to comment on the vacuous nature of pop music and the egotism and arrogance of the culture that created them. Their deconstruction of the form lays bare the silliness of the songs and our blind hero worship of the bands and the makers of the music… the emphasis on the ‘cult of personality’ that makes pop music into a massive commercial enterprise. Taking on luminaries such as the Beatles, the Stones, the Beach Boys, the Doors, and Iron Butterfly is no small task. The original songs can never be heard the same way again. Agree or disagree, these serious art school aficionados have read their Situationist tracts: an empty society produces empty music.

Their 1989 effort The King and Eye retells the Elvis Presley myth in a similar fashion. Commercial Album (1980) is a collection of the most simplistic one-minute songs imaginable, again, commenting more on the ridiculousness of the pop song form rather than the making of the actual product. The Residents are not primarily musicians but multimedia artists. Their signature sound is nightmarish, dissonant, naïve, and renegade. The Residents are not for everyone, but to those who understand and appreciate what they are doing, they are masters. 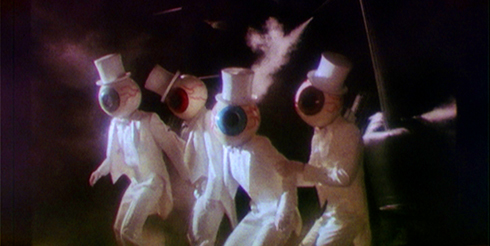 Theory of Obscurity might be a definitive documentary about The Residents, except that the lack of official people to interview presents something of a handicap. Director Don Hardy instead presents samples of the group’s work, and glimpses behind the scene courtesy of the group’s own video archives. Archival footage from earlier in the group’s history should fascinate long-time Residents fans. People that have worked for and with The Residents — other performers and artists, mainly – offer their personal impressions of the group. The celebrities tapped include Penn Jillete of Penn and Teller, Matt Groening of The Simpsons, Jerry Casale of Devo, and Jerry Harrison of the Talking Heads.

And then there are the interviews with members of The Cryptic Corporation executive team, which purports to be a management company formed to insulate the artists from any apparent identification with the moneymaking world of pop art and music. The men identify themselves as Homer Flynn, Hardy Fox, Jay Clem, and John Kennedy. Together they provide a detailed history of The Residents’ career from a quasi-business perspective. By this time we realize the very non-documentary conceit of Theory of Obscurity: the principals of the Cryptic Corporation are none other than The Residents themselves. The show maintains The Residents’ insistence on anonymity and enigma while at the same time winking at those in the audience that have the figured out the puzzle. While this approach is entertaining, fans aren’t given the kind of cult minutiae they’d love to see, let alone any personal insider insights as to what makes the band tick. The group still doesn’t have a face, which means that they can continue to avoid the ‘cult of personality’ and stay true to their art.

Director Don Hardy assembles this trick-puzzle docu with assurance. He has solid credits in previous work. Sound sMan (2006) is an affectionate ode to the development of the tape recorder; Witch Hunt (2008) details the effect of a child molestation scandal; and The Human Experiment is about our exposure to dangerous chemicals in household products. Here Hardy blends the interviews with the group’s archived film and video, of both their multimedia projects and their stage shows. High points of the film include home videos dating back to the early 1970s of The Residents at work, and extended takes from their recent fortieth anniversary tour.

The most interesting footage comes from the shelved film and video project Vileness Fats, an elaborately designed stage-like phantasmagoria with strange creatures and insane sets, a Spook Show constructed from arts ‘n’ crafts materials. To some the designs will remind of the flaky soft-core freakout Forbidden Zone. This looks even more abstract, like panels from one of those dialogue-free graphics in ancient Zap Comix.. Unfortunately, in film the adage “If you build it they will come” doesn’t work. It’s a shame that the group hadn’t the resources to properly film their creations, and we understand why they abandoned further major filmmaking efforts. Interestingly, for the most part The Residents’ work might as well be G-rated. The creativity doesn’t enlist profane or pornographic themes, at least not on the surface. 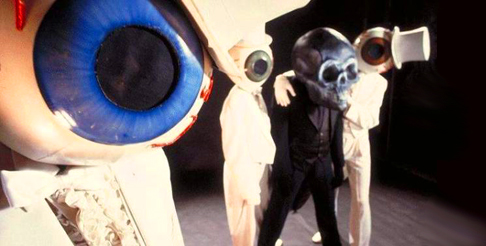 The film ends as we watch Cryptic Corporation’s Homer Flynn lovingly installing The Residents’ full collection at the Museum of Modern Art. Called ‘The Ultimate Box Set’, the container for the exhibit is a grandly displayed aluminum refrigerator. Even this event has an intentional feel of parody, as if The Residents’ work is being stored in a time capsule for the benefit of future archeologists. Everything about the group — the museum installation, this docu — comes off as yet another experiment in performance art.

Help and advice with this review came from Rick Crawford

Film Movement’s Blu-ray of Theory of Obscurity: A Film About The Residents is an interesting package beyond the docu itself. The video quality is excellent, as is the audio. Someone has taken pains to properly restore the ancient half-inch video of their early work. Director Don Hardy uses a few creative techniques to tell the story, but doesn’t go overboard. The only gimmick that wears out its welcome is the occasional employment of footage from old industrial and educational films, to illustrate the group’s history when no relevant video is available. I’m dubbing this the Daniel Griffith Effect, as he uses it so often on film-related featurettes.

The extensive Value Added Material is fully listed below. The Blu-ray release includes an extra group of interviews. Theory of Obscurity is an intriguing package and will suffice until The Residents enlease the Ultimate Box Set unto the masses.

Theory of Obscurity: A Film About The Residents
Blu-ray rates:
Movie: Very Good
Video: Excellent
Sound:Excellent
Supplements: (from the package) Bonus features include: Footage of The Residents first EVER performance at The Boarding House in San Francisco; footage and outtakes from their uncompleted film Vileness Fat; three remastered classic short films by The Residents; new short film created from never-before-seen footage from The Residents’ Hello Skinny sessions for their song Mellon Collie Lassie; animated short film from an unfinished feature called Freak Show; pioneering found footage short film called The Walking Woman; short film of the delivery of one of only two existing copies of the Ultimate Box Set to the Museum of Modern Art in NYC.
Additional Blu Ray bonus features include extended interviews with notable boosters that appeared in the films, such as: Matt Groening, the founders of Cryptic Corporation, Les Claypool, Dean Ween, Gary Panter, Jerry Harrison, and others.
Deaf and Hearing-impaired Friendly? N0; Subtitles: None
Packaging: Keep case
Reviewed: April 24, 2016
(5090obsc)