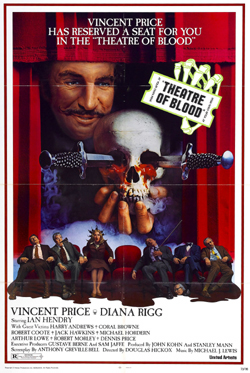 Every creative artist’s favorite anti-critic movie, as poorly reviewed Shakespearean actor Edward Lionheart gruesomely avenges himself on those who panned him. Probably the classiest of Vincent Price’s late career vehicles, in which he’s supported by the cream of British character actor royalty. Beautifully shot by Wolfgang Suzchitzky with a memorably contrapuntal romantic score by Michael J. Lewis, nuanced direction by Douglas Hickcox and a wittily literate script by Anthony Greville-Bell. Similar to Price’s Dr. Phibes murder sprees, but far less cartoony and more emotionally affecting. Apologies for the poor quality of this trailer (with Danish subtitles yet) but it’s the only one we could find in the correct ratio with the narration intact.