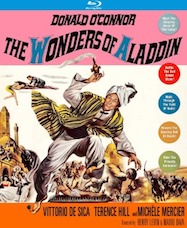 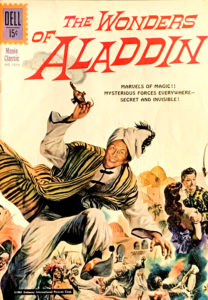 Henry Levin was a more than reliable director of Hollywood entertainments, most notably the unassailable widescreen thrills of Journey to the Center of the Earth. Donald O’Connor was a first-class, multi-faceted actor. Mario Bava was a visionary genre trickster. And Vittorio De Sica was one of world cinema’s greatest artists. Shocking, then, that their 1960 collaboration, The Wonders of Aladdin is just another movie… a non-event, a Saturday matinee misfire.

O’Connor promoted the fantasy with a bit of brazen ballyhoo: “The story of Aladdin has been done by everyone but this is its first time around as a comedy.” Dave and Max Fleischer would beg to differ—their 1939 Popeye cartoon, Aladdin and His Wonderful Lamp, serves up more laughs, not to mention more magic, in its 21 minutes than the entire running time of Levin’s opus while Tonino Delli Colli’s Eastmancolor cinematography pales next to the Fleischer’s Technicolor mini-epic. Admittedly, as the ravishing Princess at the center of the drama, Michèle Mercier gives Olive Oyl a run for her money. 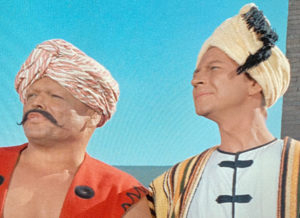 Screenwriter Luther Davis lifted Popeye’s storyline too and he finds a way to drain any of the fun out of the seemingly ironclad story of an unwitting thief who lays his hands on an enchanted lamp (did anyone question the wisdom of hiring the man behind Lady in a Cage for a kiddie show?) O’Connor plays Aladdin, the footloose schnook who eventually realizes that the lantern in his back pocket is home to a valet with supernatural powers. De Sica plays the genie at Aladdin’s beck and call even though the great director is rarely actually in the same scene as his co-stars—he appears in disembodied form thanks to Bava’s special effects wizardry. That disengagement from his fellow actors may have affected his performance—De Sica behaves like a bored shoe salesman (he was glum about the experience while promoting Two Women later that year—”It was a picture for children… only a week… but very tiring because of tricks.”) 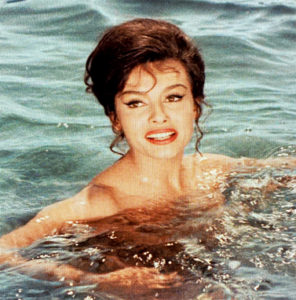 Mercier, just off Truffaut’s Shoot the Piano Player, and Mario Girotti (better known as Terence Hill, amiable star of Italian and German westerns) are star-crossed lovers whose wedding plans are interrupted by a wicked vizier played by Fausto Tozzi (Tozzi finished his career in a series of Italian mobster films like 1972’s The Sicilian Connection). Aladdin and his hulking but good-hearted bodyguard (the alarming Milton Reid—once you’ve seen him in Hammer’s Night Creatures you’ll never forget him) spend their time dodging one peril after another but the rescue of the princess and her boy toy is never in doubt and there’s a happy ending for all—made a lot less happy by O’Connor’s exit on a “flying carpet”, a special effect executed via some truly execrable matte work. 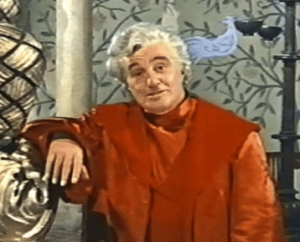 De Sica is absent for most of the film (his scenes were shot quickly and he was busy elsewhere, directing or acting in almost fifteen films during that time period) but Donald O’Connor is off-screen for long periods too—though some of that might be chalked up to the film’s inordinately long shooting schedule (filming began in December 1960 and finally wrapped in March of 1961). This was not the happiest shoot for the funny man—he suffered a hemorrhage near the start of production but that was just the beginning of his troubles; he described Tunisia as a country club he wanted no part of; “… a big sand trap without any greens… if you get out… and order a steak, you don’t know whether you are eating beef or camel… from now on I’ll do nothing but drawing room comedies, and the only location I’m going on is in my backyard”. 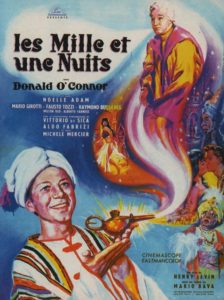 Taking a closer look at 1960’s Tunisian landscape, including its dangerous political atmosphere, O’Connor’s grousing becomes a bit more understandable. The movie crew was subjected to the scene of a botched revolution in which five Tunisians were killed and several others wounded. At one point O’Connor, Levin and future producer Harvey Matofsky accidentally crossed the border into Algeria where they were held for three hours and only released once a production assistant retrieved their passports from the hotel. All that plus a window-rattling earthquake was enough to dampen any actor’s spirits.

At least one crew member might have been happy with his situation—designer Flavio Mogherini, whose art direction is the real Wonder of Aladdin—his splendiferous recreation of a Bagdad street block is remarkable in its scope and detail (he had a generous budget to play with too, $100,000—around $871,000 in contemporary funds). Critics were split on the results—the Los Angeles Times found it the “perfect answer” for bored children while the New York Times called it a “hackneyed costume (fantasy) from the dubbing chambers of Joesph E. Levine” and noted that O’ Connor and De Sica have “never looked so miserable.”

While Kino Lorber’s new Blu ray hardly looks miserable Delli Colli’s photography looks a little rough around the edges, lacking in detail and clarity—but the print is clean and extremely colorful indicating the transfer is as good as it can be. Naturally Tim Lucas turns in another info-packed commentary which always makes the purchase of any disc with his name on it a no-brainer. The extras conclude with trailers for like-minded genres titles Jack the Giant Killer, The Magic Sword, Arabian Nights, Ali Baba and the Forty Thieves, and Son of Ali Baba.