Indicator follows up The Wonderful Worlds of Ray Harryhausen, Volume One: 1955-1960 with, wait for it, Volume 2: 1961-1964, featuring three of Harryhausen’s most ambitious productions. Good news for fans, the UK company delivers another robust box set with beautiful transfers and an abundance of extras including newly produced interviews, a small treasure trove of promotional ephemera and a limited edition 80-page book with essays from Kim Newman and Tim Lucas. The set is region free, playable on Blu-ray devices worldwide. 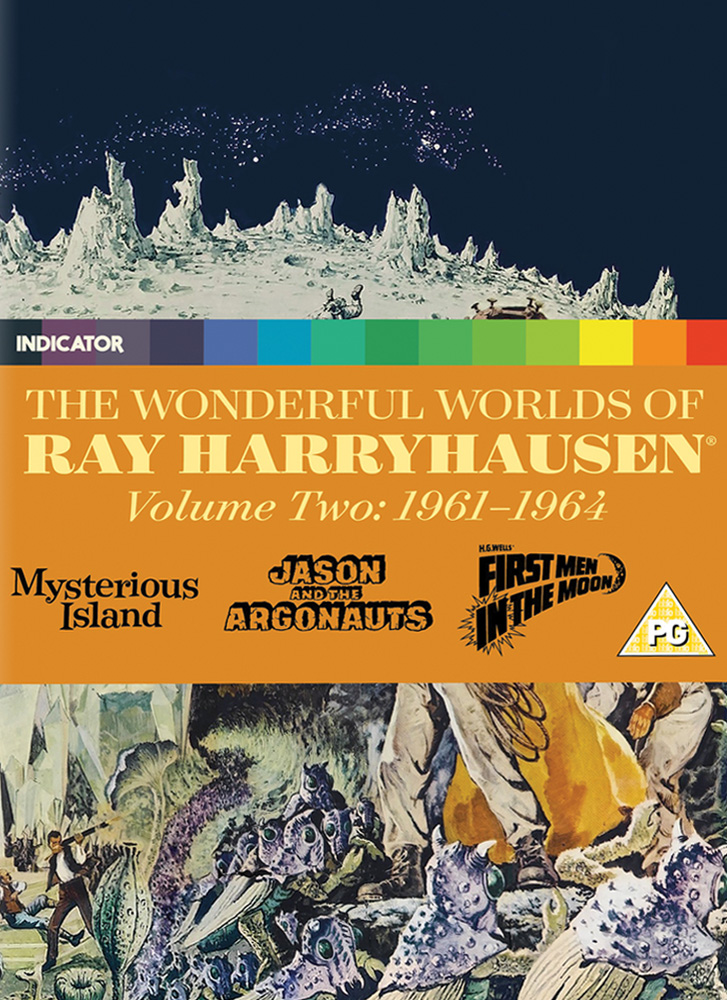 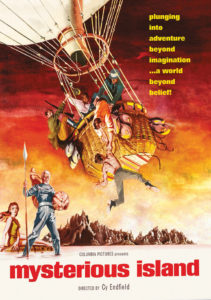 Raging thunderstorms and a tempestuous score from Bernard Herrmann kick off 1961’s Mysterious Island as a water-logged crew of Union soldiers make their escape from a Confederate stronghold. Thanks to a convenient hot-air balloon they elude the rebels by the skin of their teeth only to be blown away to a remote atoll where they settle into a more sedate Crusoe-like routine.

The arrival of two ship-wrecked damsels provides the men with a pleasant desert isle distraction which is more than can be said for the parade of out-sized critters that interrupt the picnic including a giant octopus, a plus-sized turkey, and a jumbo crab that would’ve put Paul Prudhomme into cardiac arrest.

The man responsible for those mutations is Captain Nemo, a philosopher/scientist who sails beneath the sea via the Nautilus, a futuristic submarine described by Jules Verne as “a masterpiece containing masterpieces”. One of the most fascinatingly conflicted characters in fantasy fiction, Nemo is a pacifist with the blood of innocents on his hands, blindly destroying battleships regardless of the consequences. True to his unpredictable nature, the mysterious seafarer decides to help the castaways renovate their sunken ship and escape the island.

This brightly colored fantasy, photographed by Wilkie Cooper (who got a head start on this sort of thing with 1957’s Paradise Lagoon), is one of the few Harryhausen vehicles that could survive without the animator’s trademark special effects. A rousing Boys Life adventure, the film is propelled by Cy Endfield’s muscular direction and Herrmann’s blood and thunder score, an anvil-driven barn-burner perfect for dispatching angry crustaceans and grabby octopi.

Indicator’s new transfer has an edge on the fine but already out-of-print Twilight Time release and once again it’s the extra-added attractions that make this box set such a winning presentation.

The extras for Mysterious Island include: 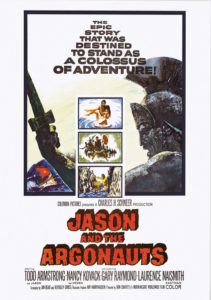 Seeking to avenge the slaughter of his family, young Jason sets off in search of a chimerical golden fleece imbued with magical powers. With a helping hand from the cloud-bound residents of Mount Olympus, the young adventurer and his crew of champions run a gauntlet of mythological giants, harpies and dragons that transform 1963’s Jason and the Argonauts into a rogue’s gallery of Ray Harryhausen’s finest creations.

It’s a rare Harryhausen film in which the thrills come not just from those fantastic monsters but the down-to-earth actors and their spirited dialog yet director Don Chaffey’s picaresque fantasy is exactly that. Stacked with sturdy thespians like Laurence Naismith, Niall MacGinnis and Nigel Green and an unusually eloquent script from Jan Read and Beverley Cross, Jason frames the conflict between ancient gods and their human pawns as a wry comedy of manners.

Zeus himself is portrayed by MacGinnis as a weary Godfather lording over a heaven-set soap opera peopled by lesser deities who bicker and scheme while courting their master’s favor. Meanwhile the bedeviled titan is burdened by the earthly duo of Jason and Hercules, one a headstrong prig, the other a Rabelaisian hell raiser who finds trouble where others dare not tread.

The legendary strongman is played by the barrel-chested Green whose Olympian appetite for all earthly pleasures is wonderfully fleshed out by the bearish South African actor, a memorable turn matched by Patrick Troughton as the heretic Phineas, a pariah whose penance comes in the form of macabre flying gargoyles. Troughton delivers the film’s most memorable line, a universal lament if ever there was one: “Zeus, I was a sinner. I’ve never tried to deny it. But I didn’t sin every day. Why then do you punish me every day?”

Harryhausen’s remarkably eclectic technique, from the hypnotic slither of the Hydra to the rickety army of battle-crazed skeletons, earns him a seat in Olympus alongside the other titans. But it’s the sight of the monster statue Talos, a high-rise horror with the dead eyes of a shark and an unrelenting attack plan, that still inspires shivers. Had Harryhausen been responsible for Schwarzenegger’s Terminator, Talos would have been the result.

For such an action-packed Saturday matinee, the film features an unusually lyrical finale with a coda delivered by Zeus that says more about the down-to-earth deity than it does his earthbound pawn: “For the moment, let them enjoy a calm sea, a fresh breeze and each other. The girl is pretty and I was always sentimental.”

Indicator’s Blu-ray of Jason and the Argonauts is precisely the same 2010  stateside release from Sony featuring the same extras, menus and transfer. That is hardly a bad thing, the Sony version is very fine, but folks looking for the Indicator bump will suffer some small disappointment. 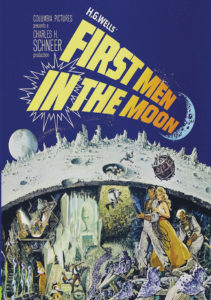 A moonstruck fantasy that owes as much to Georges Méliès as it does to Arthur C. Clarke in its cheery disregard for actual science, First Men in the Moon is Harryhausen’s flirtation with the world of Ealing comedy, thanks specifically to the presence of Lionel Jeffries as an absent-minded professor with a daft scheme to frolic among the lunar landscapes.

Jeffries plays Professor Cavor, the inventor of “Cavorite”, an anti-gravity substance capable of propelling an object to the moon and back. A comedy of errors saddles the unlucky scientist with two unwanted crew members, a down-on-his-luck playwright and his fed-up fiancee and soon enough the bickering trio are bouncing across the moon’s surface and facing down an army of giant insects, ant-like warriors known as Selenites.

The film’s jolly atmosphere is catnip for director Nathan Juran whose kid-friendly fantasies delighted a generation of children but the benign nature of Cavor’s hi-jinx are a bit of a detour for screenwriter Nigel Kneale whose brainy take on science fiction, like Quatermass and the Pit and The Year of the Sex Olympics, were the very definition of provocative. Nevertheless Wilkie Cooper’s sleek widescreen photography and composer Laurie Johnson’s otherworldly theme tie the film together in a big bright bow, just in time for its Thanksgiving release in 1964.

The supplements for First Men In the Moon are:

Here are Glenn Erickson’s reviews of the previous releases from Twilight Time and Sony:
Mysterious Island
Jason and the Argonauts
First Men In the Moon