Since the early days of home video Ray Harryhausen’s films have been a lightning rod for companies eager to one-up the competition with bigger and brighter releases of the beloved animator’s work. Located in the UK, Powerhouse/Indicator is the latest to jump on the bandwagon with lavishly appointed blu ray sets each featuring three of his films. Though all these movies have been previously released through other companies, Powerhouse has upped the ante with fresh transfers and a broad slate of new extras. 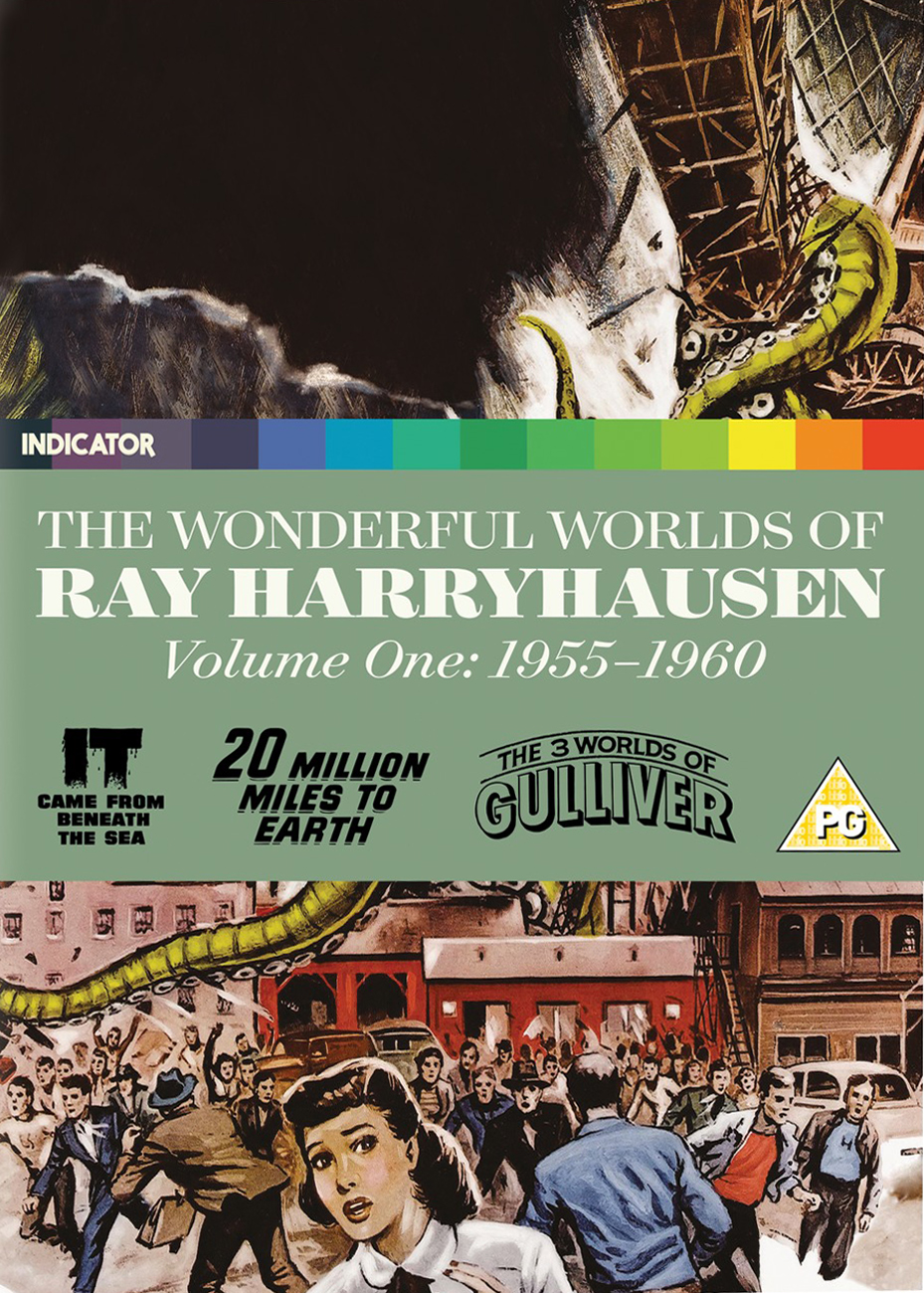 USS Nautilus, the first nuclear-powered submarine, put to sea in 1955 – it might not be a coincidence that It Came From Beneath the Sea set sail that same year. Pete Mathews, the ruddy-faced hero of the film is the commander of his own atomic-fueled barge and its there that he receives reports of a shadowy entity, a monstrous octopus slowly making its way stateside. Shrugging off every obstacle that Matthews and his crew can manufacture, the monster barrels toward the San Francisco bay with its tentacles set on the Golden Gate Bridge and points beyond. Meanwhile the square-jawed Matthews, in the best tradition of Man’s Life Magazine, battens down the hatches, hoping to corral the barnstorming mollusc before it lays waste to the Golden Coast. 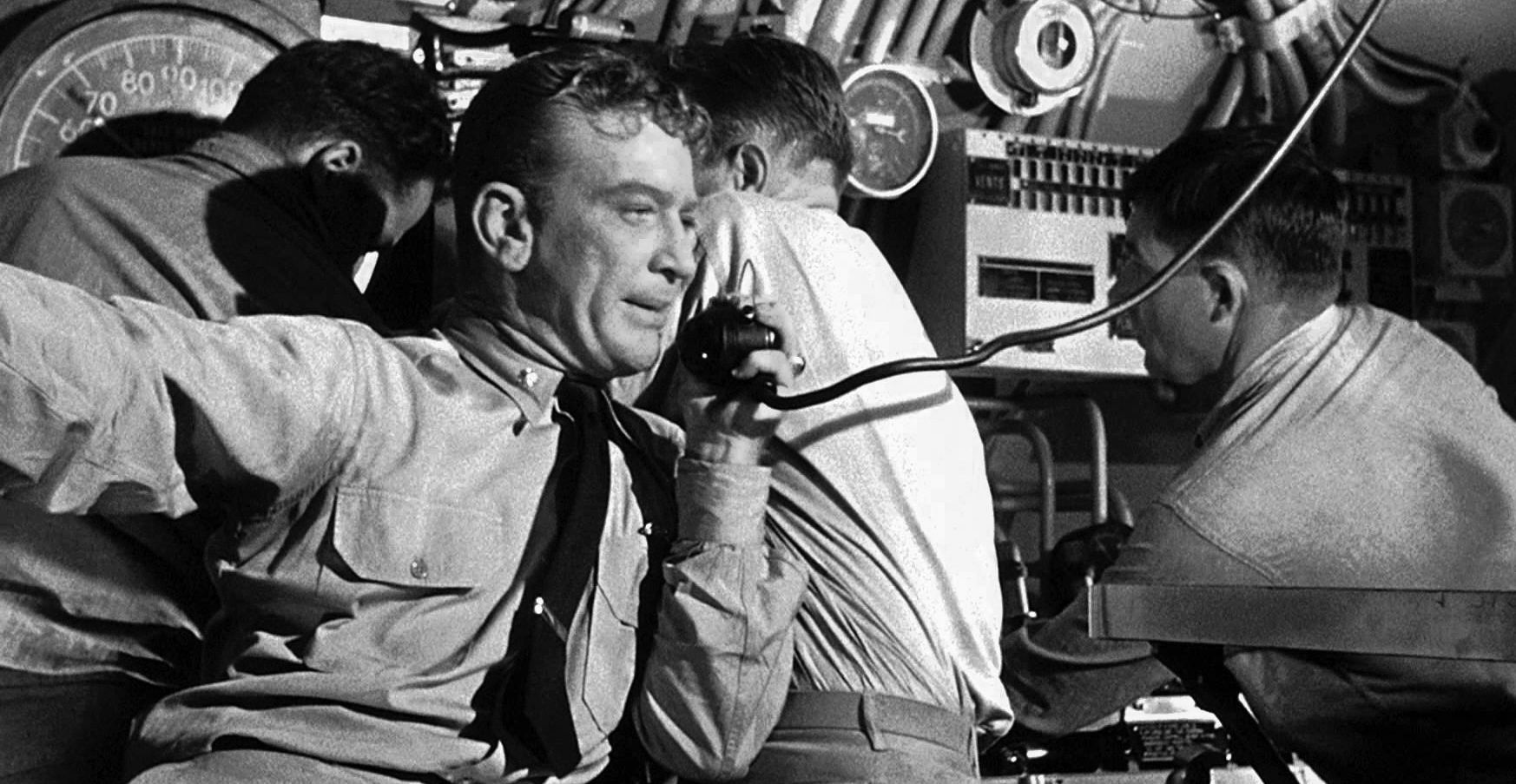 Renowned among monster movie connoisseurs for Harryhausen’s cost-efficient creature (the octopus comes with six tentacles instead of the standard issue eight), It Came From Beneath the Sea was the animator’s second solo project and one that posed a unique challenge, how to give character to what was essentially a writhing mass of faceless tentacles. Well, he didn’t. But what the slimy leviathan lacks in character it makes up for in its elegant approach to mass destruction as its tentacles slither through San Francisco in a sinuous variation on Salome’s dance, writhing and wiggling their way past Fisherman’s Wharf and onward to Chinatown. 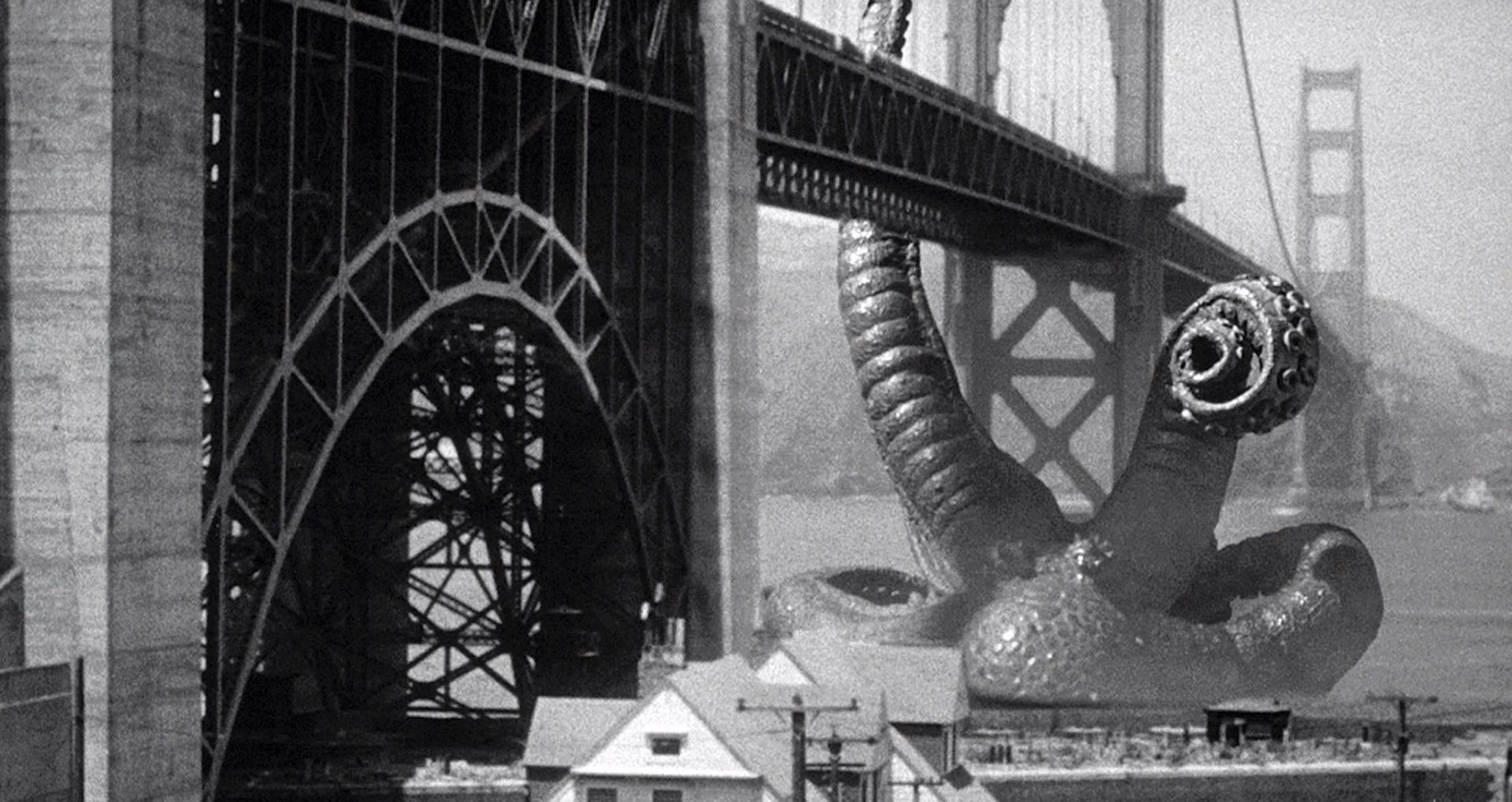 Opening in July 1955 on a nuclear-powered double-bill with Creature With the Atom Brain, It Came from Beneath the Sea is a pale reflection of Harryhausen’s dynamic dino-fest from 1953, Beast from 20,000 Fathoms, but it remains a quintessential Cold War Matinee popcorn-muncher (especially when joined by Atom Brain’s more ominous warnings of robotic infiltrators). Directed by the profoundly pedestrian Robert Gordon, the movie is goosed along by the always terrific Kenneth Tobey as the can-do navy commander and Harryhausen’s hypnotic special effects.

Powerhouse’s transfer of Henry Freulich’s cinematography reveals a nicely detailed image only kicking up a grain-storm when Harryhausen’s mattes and rear projections appear. The disc repeats a few features from a previous release including a commentary by Harryhausen, Randall William Cook, John Bruno and Arnold Kunert, along with a 30 minute documentary, Remembering It Came From Beneath the Sea, a short film, A Present-Day Look at Stop Motion and a half hour chat between Harryhausen and Tim Burton.

New supplements from Powerhouse include Tidal Wave of Terror! featuring Joe Dante’s breezy recollections of Harryhausen’s octopus, a “digi-comic”, It Came From Beneath the Sea Again and Ernest Dickerson’s Trailers From Hell Commentary plus an image gallery of various promotional materials.

Upon its return from Venus a spacecraft makes a wrong turn and crashes off the coast of Sicily. Rescued from the doomed rocket are two broken and bruised astronauts and a gleaming metal canister harboring a sinister reptilian embryo. Once hatched, the weirdly-cute critter grows in leaps and bounds, eventually transforming into a towering beast that dwarfs the pillars of the Colosseum. The monster, kidnapped from its home only to meet its fate clinging to a sky-scraping monument is the closest Harryhausen ever came to creating his own King Kong. Though 20 Million Miles came early in his career, his technique is remarkably assured and empathetic; the little Ymir’s bewildered expressions and enraged outbursts are beautifully accomplished.

It’s a good thing there’s some above-average emoting from the Venusian because the earthlings are a sorry bunch of thespians. Plus the cringeworthy Sicilian stereotypes inhabiting the rear-projected fishing village must have been embarrassing even in the less woke days of 1957. Fortunately Nathan Juran’s direction is typically brisk (he brings the action-packed story in under an hour and 22 minutes) and he makes the most of Harryhausen’s monsterific set-pieces including a suspenseful showdown in a shadowy barn and the creature’s Kong-like final adieu atop the pillars of the Colosseum. 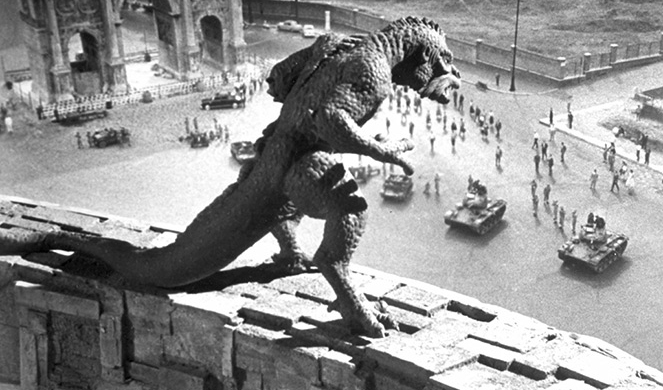 Powerhouse duplicates supplements from a previous release with a commentary by Harryhausen, Dennis Muren, Phil Tippett, and Arnold Kunert along with a half hour documentary, Remembering 20 Million Miles to Earth, an interview with actress Joan Taylor, a documentary about composer Mischa Bakaleinikoff, Film Music’s Unsung Hero, a short look at the satanic process known as Colorization, and a trailer and image gallery.

Powerhouse’s new supplements include Elijah Drenner’s documentary Finding Harryhausen (featuring Dennis Muren) and a “digi-comc” 20 Million Miles More plus a a Super 8 version of the film produced in the vein of Castle Films abridgments.

Based on Jonathan Swift’s 1726 satire, The 3 Worlds of Gulliver was released just in time for Christmas in 1960. The candy-colored adventure was certainly more of a present for the kids rather than a tonic for the adults, though that situation might have been reversed if director and screenwriter Jack Sher had seen fit to honor the Irish writer’s own intentions which were, in Swift’s words, “to vex the world rather than divert it”.

But this is first and foremost a Ray Harryhausen picture so bring on the diversions – which, ironically, include relatively few of the animated marvels that we’d come to expect from the great illusionist – his work in Gulliver consists of animating earthbound squirrels and alligators rather than the fairy tale dragons and cyclops we’d come to expect. 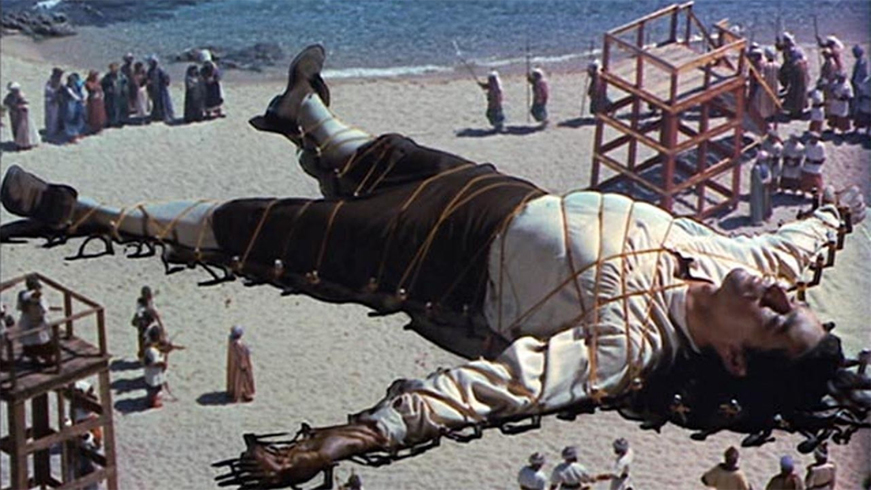 Sher’s script (co-written with Arthur Ross) strips Swift’s novel of most of its lacerating social satire and concentrates on the fantastic aspects of a shipwrecked doctor’s travels between Lilliput and Brobdingnag, one land populated by thin-skinned little people, the other isle inhabited by oversensitive giants looking to settle imaginary scores. Though the film is low on the usual Harryhausen dazzle, it has a sweet storybook nature and Bernard Herrmann’s jolly-old-England soundtrack would make the most confirmed Grinch’s heart grow three sizes.

Powerhouse’s set features a really lovely transfer that appears to have the edge on Twilight Time’s earlier release (in part because it doesn’t have to share space with an alternate version of the film as did the TT release). 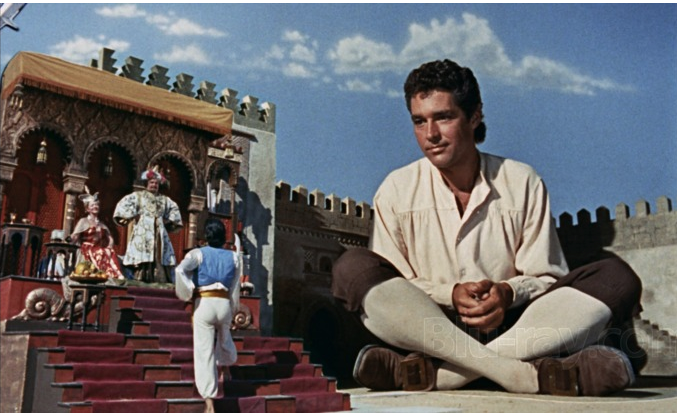 Powerhouse uses the same audio commentary found on the Twilight Time disc (with Randall Cook, C. Courtney Joyner, and Steven C. Smith) as well as their short doc, The Making of “The 3 Worlds of Gulliver, Herrmann’s score on an isolated track and the theatrical trailer.

New features include interviews with the excitable co-founders of Aardman Animations, British animators Peter Lord and David Sproxton and Aardman animator Dave Alex Riddett. They each have maintained their childlike glee in Harryhausen’s movies that shows itself in the affable goofiness and kinetic slapstick of their short films starring Wallace and Gromit and full-length features like The Curse of the Were-Rabbit. The disc also includes an image gallery of bland promotional materials for Gulliver, none of which is able to convey the film’s unique charms.

A booklet accompanies the set with appreciations of each film from Kim Newman, Dan Whitehead and Charlie Brigdand and oral histories on the making of the films compiled by Jeff Billington.

Also, lurking in the shadows among the extras are shame-faced colorized versions of It Came from Beneath the Sea (which transforms the octopus into an out-of-control play-doh experiment and Ken Tobey into a Ken doll) and 20 Million Miles to Earth. Surprisingly Harryhausen himself has a relatively sanguine response to the desecration, one at odds with Orson Welles’s warning to future philistines, “Keep Ted Turner and his goddamned Crayolas away from my movie.”