It’s Marlene Dietrich, before Josef von Sternberg and The Blue Angel — and much of her mystique is already present. This sophisticated German silent observes a precarious, dangerous love triangle. Two men are entranced by the same woman: one deserts his bride on their wedding night and the other may have killed to possess her. Neither seems to get what he wants yet Dietrich’s ‘woman one longs for’ is not a scheming femme fatale … maybe. The fluid, very modern direction of Curtis Bernhardt will be a revelation — this obscure Marlene Dietrich starrer is a superior piece of filmcraft. 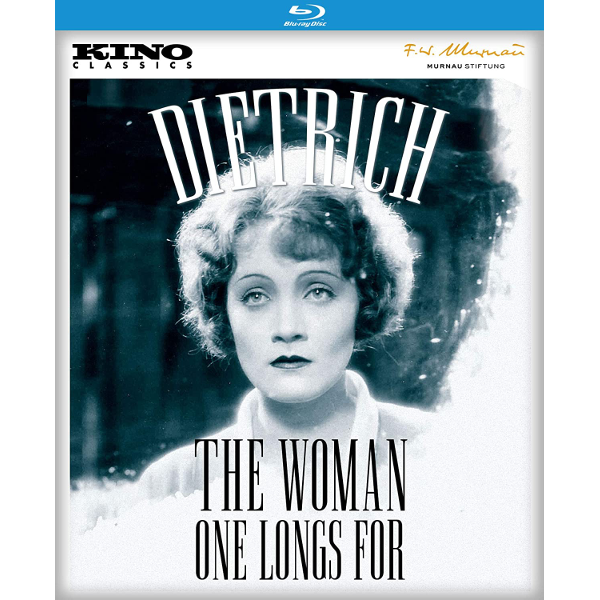 Thanks to public-supported entities like the Friedrich-Wilhelm-Murnau-Stiftung more and more vintage German silents have been restored. We Blu-ray fans are the beneficiaries: we recently saw an impressive recovered version of Pabst’s The Love of Jeanne Ney, which has been cited as a masterpiece since the beginning of film criticism. But also rejuvenated are vintage attractions not enthroned in the critical pantheon. A recent arrival is Robert Siodmak’s early talkie The Man in Search of His Murderer, which was partly written by Billy Wilder.

1929’s The Woman One Longs For has a special appeal: Marlene Dietrich. For many it will be an eye-opener, proving that Dietrich’s stellar career did not begin with her international breakthrough, the talkie The Blue Angel. In forming her publicity bio Dietrich simplified her story by omitting everything pre- von Sternberg. Yet she had been in the business almost ten years, played in scores of Weimar pictures and even starred in several. This silent The Woman One Longs For (aka Three Loves) gives us the Dietrich we know with the same smoldering allure. As commentator Gaylen Studlar says, it’s a highly voyeuristic picture: our leading man is captivated by the same erotic visual appeal that propelled Dietrich through her von Sternberg films. 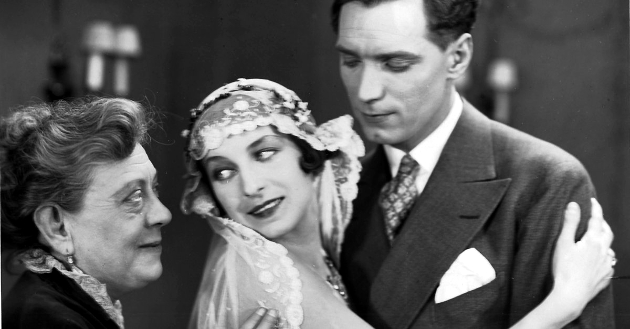 The story by Ladislaus Vajda (Pandora’s Box, Die 3 Groshen-Oper, several films by Michael Curtiz) is a moody, dark tale of obsession. The characters keep us guessing throughout: through most of the movie the lovestruck leading man is too enraptured to demand to know exactly what he’s got himself into. We don’t know either. Shuffling the possibilities of what we do know, the storyline of The Woman One Longs For could be a sequel to Double Indemnity set in a different time and place.

The setting is Southern France. The established family Leblanc are industrialists with a vast chemical factory, run by brothers Charles and Henri (Oskar Sima & Uno Henning) — and on the verge of bankruptcy. Charles has negotiated a solution to the problem: Henri must marry young Angela Poitrier (Edith Edwards), the daughter of the magnate Poitrier (Karl Etlinger). Poitrier thinks the Leblanc works are a bad investment but dotes on his lovestruck daughter, so the deal goes through. The somewhat subdued Henri likes his fianceé but doesn’t love her. No sooner are they on their honeymoon train than Henri encounters the mysterious Stascha (Marlene Dietrich), an intoxicating vision first seen through a frosted window. The desperate Stascha begs Henri’s help to escape her older, wealthy male traveling companion Dr. Karoff (Fritz Kortner). Henri has known Stascha for less than five minutes yet can’t help himself: he abandons Angela to chase after a woman he knows nothing about…

Amour Fou doesn’t come any more Fou than this gem, directed in fine style by Kurt (Curtis) Bernhardt. It’s quite an accomplishment, showing off Bernhardt’s exceptionally expressive and sensitive camera direction. It’s no wonder that Hollywood welcomed Bernhardt when the time came for him to flee Europe; it’s a pity that most of his American studio pictures aren’t as creatively stylish as this one. The show is modern in every way, with complex angles and camera moves that at all times direct the audience’s eye. Without dialogue and with few inter-titles we’re always keenly aware of where we are, and more importantly who is looking at whom. Alfred Hitchcock didn’t have a patent on subjective camera technique, and Bernhardt’s is very subtle. 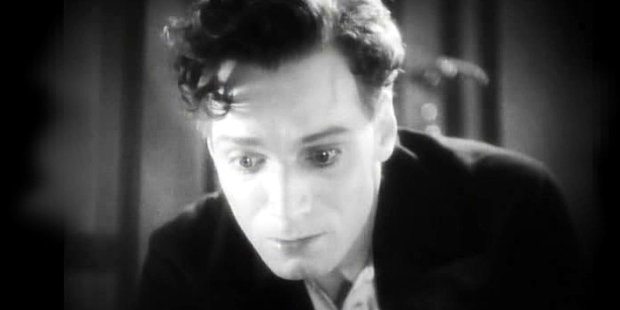 The story isn’t moralistic; Bernhard observes the amorous standoff without shorthand judgments decreeing who is right and who is wrong. The message seems to be that nobody has full control of their character, and extraordinary circumstances can turn lives upside down. The sweet Angela doesn’t deserve what happens to her, and we can’t fully condemn Henri for running away. He follows Stascha and Dr. Karoff to a New Year’s celebration at a mountain chalet, where Bernhardt’s roving camera exploits the holiday chaos. Stascha introduces Henri to Karoff as her cousin, a dodge that Karoff accepts but obviously doesn’t believe. The doctor doesn’t dare get rough with Henri in public… for good reason, we eventually find out.

The Leblanc empire has been introduced with an ‘industry’ montage reminiscent of Metropolis, but from the train scene forward we stay with Henri Leblanc’s subjective experience dealing with Stascha and the (possibly) malevolent Dr. Karoff. There is no parallel narrative coverage of the reactions of the Leblancs and Poitriers left behind, and no cutaways to any possible police action. When Karoff worries that somebody has gone through his belongings, we don’t know if he’s perceptive or paranoid. 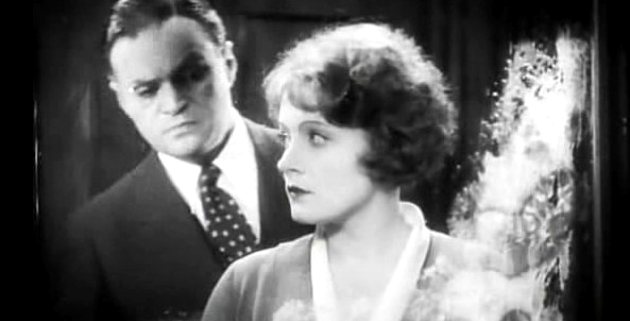 This makes Henri’s ‘lost weekend’ even more acute, as he tries to read the situation between Stascha and his rival. For the most part all of this ambiguity is communicated without dialogue — a real filmmaking achievement. Dr. Karoff clearly has a hold on Stascha but sometimes she seems in control. If this were an American noir we’d assume that Stascha is framing Henri to be a fall guy, like Michael O’Hara in The Lady from Shanghai. The truth is not as twisted but it is sufficiently sordid. In the tangle of lovers that ‘just can’t help themselves’ even Karoff is marginally sympathetic.

The Woman One Longs For was released in 1929 but when Dietrich became a sensation it was reissued with a synchronized music score and retitled as Three Loves. Fritz Kortner was the bigger star name in 1929, with the classics Warning Shadows, The Hands of Orlac and Pandora’s Box under his belt. The handsome Uno Henning was popular on the continent and worked in England as well; we’ve seen him in Anthony Asquith’s A Cottage on Dartmoor, a fairly amazing silent that for clever nonverbal storytelling out-Hitchcocks Hitchcock. Henning also plays a dashing idealized love interest in the recently restored The Love of Jeanne Ney.

The rivalry plays out as an unacknowledged but obvious cold war. The desperate Dr. Karoff can’t accept the fact that Stascha no longer wants him. Without giving anything away it soon becomes evident that Karoff and Stascha have something serious to hide, that gives them a hold on each other. Henri knows something’s afoot but only cares about having Stascha for himself. Not even pretending to be a cousin, he hangs about in the hope that Stascha will make a break with him.

“… men cluster to me like moths around a flame…”

That leaves Dietrich’s Stascha as a fascinating unknown quantity — despite all her secrets she could be a sincere, confused innocent. Will she perhaps reject Henri the same way she’s rejected Dr. Karoff, and before him her husband?  I don’t believe there’s any evidence of sexual relations between him and Stascha, if only because Karoff is never far away. One of the most amour fou aspects of The Woman One Longs For is that all three characters are runaways from their own lives. They somehow think they can run away again, can layer escape onto escape.

Film fans that know the svelte Marlene Dietrich from her American films can be surprised when they see her plump and somewhat vulgar cabaret performer Lola-Lola in The Blue Angel. Older books suggested that von Sternberg was something of a Pygmalion, that he sculpted Dietrich’s performances and her visual appearance: clothes, hair makeup, attitude. We had presumed that she seriously slimmed down for her first Paramount picture Morocco. After seeing The Woman One Longs For we wonder if Dietrich fattened up a bit to play Lola-Lola, or if she was costumed and lighted to appear more… well fed. She and Sternberg collaborated on refining her image, but she was never a passive Galatea.

True, this Dietrich character is not the worldly and empowered female of von Sternberg’s American pictures. If Stascha has any depth she’s keeping it well hidden. One one level the character functions as an objectified beauty, a catalyst for the male hysteria around her. Her initial appearance is almost an hallucination, a literal precursor to The Woman in the Window. Some German critics dismissed Dietrich as ‘not acting,’ saying that she mostly strikes poses and that the real actor in the movie is Fritz Kortner. But Dietrich is clearly focusing on star mystique. She was very practical about her career and knew that she had an appeal that could compare with the imperious Greta Garbo and the more direct Brigitte Helm.

Did Josef von Sternberg come to Germany looking for the right muse on whom to expend his cinematic exoticism?  True, he probably had no chance with Brigitte Helm — after her experience with Fritz Lang Helm was unlikely to put her complete trust in another ‘total’ director. Marlene Dietrich was the perfect candidate. If von Sternberg saw The Woman One Longs For  he could have made up his mind with her very first shot, Kurt Bernhardt’s very Sternbergian reveal through the frosted train window. The fussy, detail-oriented Von Sternberg surely found Dietrich to be the perfect collaborator. Each was just what the other needed to out-glamorize the competition and take Hollywood by storm. 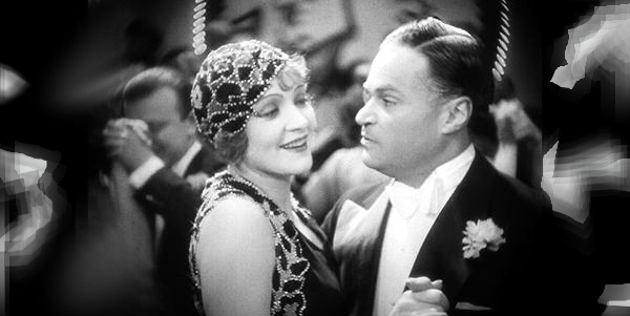 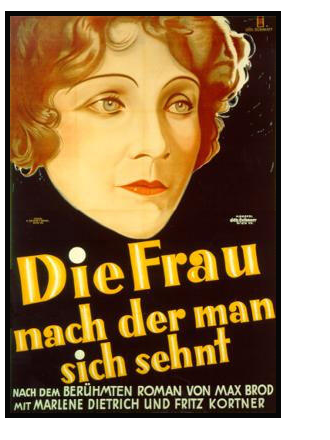 The Kino Classics Blu-ray of The Woman One Longs For is a truly impressive restoration. The film isn’t 100% intact, but it looks as if only a shot or two is missing and a few individual frames here and there. Everything else is clean, sharp and stable, looking better than most of the images I’ve found on the web for this review. The cinematography of Curt Courant (The Man Who Knew Too Much, Monsieur Verdoux) is fine all around, not just for Dietrich’s to-die-for close-ups. The full orchestral score composed by Pascal Schumacher is strong and dynamic, so much so that it all but overwhelms some scenes. The intensity is sustained throughout when more variety of tone and emphasis might have have been a better fit. Any five-minute section is a knockout, though, strong stuff.

The one extra is a thorough and perceptive audio commentary by Gaylyn Studlar. Her talk comes at the show from many angles: the film’s exceptional cast, its relative obscurity, the impressive camera direction and director Bernhardt’s ease with the material. She comments on the artificiality of the train miniatures we see — which would have been taken for granted in 1929 — but also the many beautiful images. She considers Fritz Kortner’s performance to be a tour-de-force and tells us that the German-Jewish actor had to put up with bigoted, hateful reviews from the right-wing press.

As an old Dietrich fan I found The Woman One Longs For very satisfying — how often do fans get to discover another glamorous Dietrich movie?  Some viewers may be put off that the show doesn’t turn entirely full circle: how will Henri resolve all the chaos he left back home?  I find it too satisfying as a character study to worry about narrative details: we experience Henri’s ‘amorous crisis’ right along with him.