The strangest Italian portmanteau picture of the sixties features glorious Silvana Mangano in dozens of costume changes, directed by big names (Visconti, De Sica, Pasolini) and paired with a woefully miscast Clint Eastwood. The other major attraction is a delightful music score by Piero Piccioni, with an assist from Ennio Morricone. 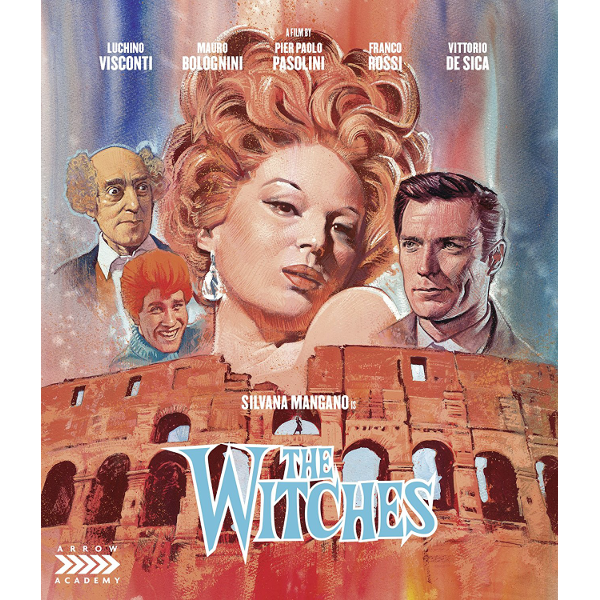 European omnibus pictures from the 1960s can usually be counted on for odd directorial contributions. The best might be 1962’s Boccaccio ’70 and 1968’s Spirits of the Dead, and even their more sensational episodes are tempered by other, lesser efforts. Reportedly filmed in 1965, released in Italy in 1967 and not really shown much elsewhere, The Witches is producer Dino De Laurentiis’ vanity production for his wife and cinematic cash cow Silvana Mangano, the smash sensation from the late 1940s. Mangano remained a notable international star even without sharing the kind of stratospheric career arc enjoyed by some of her contemporaries, notably Sophia Loren. 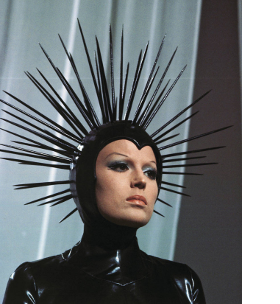 Mangano’s 1949 breakthrough in Bitter Rice made her a legend of Italian cinema; her physical presence working in rice fields and dancing added glamour to what began as a neorealist crime thriller. De Laurentiis married Mangano and showcased her in mostly inferior starring productions. Although her dance to “El negro Zumbón” in 1951’s Anna is glorious — her stylishness seems completely modern, untouched by time, — the movie itself is incompetently put together. Her best performances are in hard-to-see titles like This Angry Age, and she often contributed supporting parts to bigger movies. In terms of mass appeal Mangano is now fading into obscurity. The IMDB lists her most noted picture as David Lynch’s Dune, which is offers her little more than a glorified bit.

The Witches is an elaborate five-part omnibus giving Silvana Mangano five separate roles. Two of the episodes are directed by the world-class mainstream notables Vittorio De Sica and Luchino Visconti. The show has many points of interest but the only episode that approaches top status is Visconti’s. Unfortunately, the presence of star Clint Eastwood does no favors for the De Sica segment. Tim Lucas offers an excellent conjecture for why the English language distributor United Artists didn’t really release the picture in its territories: Eastwood’s disappointing milquetoast character was likely perceived as a detriment to his international superstar image as The Man With No Name.

The show is definitely quality goods. A major boost is the cinematography of Giuseppe Rotunno, which puts an appealing gloss on most of the episodes. The segments directed by Franco Rossi (“La Siciliana”) and Mauro Bolognini (“Senso civico”) are brief skits of minimal interest. Despite the presence of Alberto Sordi, these forgettable episodes might have been dropped, to the film’s betterment.

Not helping is any correlation between the film and its title, which misleads the viewer into expecting supernatural content. The three main episodes stand alone yet only Visconti’s adds up to a worthy vehicle for the fascinating Mangano. I saw The Witches for the first time back in the 1980s on the pioneering L.A. cable The “Z” Channel. When working for MGM/UA in the 1990s I got my mitts on a flat English-dubbed VHS. The film’s biggest appeal at the time was its terrific music score, which I wrongly assumed was by Ennio Morricone with an assist from Piero Piccioni. As it turns out, the opposite is true.

The Arrow transfer uses title sequences that combine Italian and English text, which I don’t remember from older transfers. The animated opening title sequence has the rough paste-up collage look that I never liked much, but I also don’t care for those crudely stylized title animations for most of the Sergio Leone pictures. The bouncy, fun Piero Piccioni themes behind the titles are somewhat compromised by edits, as if the music was re-edited after recording to adapt to changes in the titles. Luchino Visconti’s opening segment “La stregha bruciata viva” (The Witch Burned Alive) is the one real winner in the deck. As pointed out by reviewers more familiar with Silvana Mangano’s reluctant career, it has a personal angle. Mangano plays Gloria, a star trapped by her image. She wants to take a break to have children but her distant husband/manager has other plans. Gloria is the surprise prestige guest of Valeria (star Annie Girardot) at an anniversary party at a mountain chalet. Critiqued by the women and pursued by the males, including Valeria’s husband Paolo (Francisco Rabal), Gloria faints while performing a a dance for the guests. Unconscious, she is cruelly ‘disassembled’ by the women partygoers, who remove her makeup and hairpiece to analyze her beauty secrets. The segment overflows with familiar faces in small roles, including the stars Clara Calamai and Massimo Girotti from Visconti’s wartime James M. Cain adaptation Ossessione. Visconti fans always recognize Helmut Berger in his first role, as Helmut Steinburgher. I also see a strawberry blonde party guest who looks to me exactly like one of Adolfo Celi’s gangster molls from Danger: Diabolik, the blonde who says “Fresh air, nice!” on board Valmont’s airplane. As commentator Tim Lucas doesn’t mention it, I’m assuming I’m probably wrong. The middle segment “La terra vista dalla luna” (The Earth seen from the Moon) is a bizarre cartoon-like comic fable from Pier Paolo Pasolini, who on his way from gritty realism to his humanist costume dramas was seemingly taking a two or three film detour into pop absurdity. Jarring cartoon art direction is imposed on a bleak slum landscape, with comedian Totò and Ninetto Davoli dressed in bizarre wigs. Mourning their wife and mother, the father and son search for a suitable replacement.

They find her in a mute, pliable but mysterious Assurdina, Silvana Mangano clothed and coiffed to resemble (to me) Monica Vitti. Pasolini’s odd but largely unfunny story has nothing to do with The Moon. It instead sees Totò manipulating his perfect mate to earn more money to buy a bigger house. When that effort leads to a funeral, the ‘magic’ wife returns as a ghost. It’s all quite creative and frustratingly obtuse; fans of Totò’s distinctive mugging may react more positively. With a clue from Tim Lucas, I found myself free-associating with John Ford visuals from The Searchers (a doorway) and My Darling Clementine (with Totò and his ‘lady fair’), a digression of no consequence at all. The final episode “Una sera come le altre” (One Evening Like the Others) is the one with Clint Eastwood. It’s directed by Vittorio De Sica in a less-than forceful imitation of Federico Fellini. Frustrated by her marriage with her unresponsive hubbie Carlo (Eastwood), housewife Giovanna (Mangano) indulges in multiple domestic fantasies. Various stylized dream episodes take place in an overexposed, glowing ‘white telephone’ world; Giovanna resents Carlo’s fading sex drive and is soon imagining violent retaliation. She also cavorts with a number of comic book characters, even Diabolik. With the aid of effective fantasy special effects (including some atypically excellent Italian travelling mattes) Giovanna imagines herself cavorting in dozens of glamorous and outrageous costumes, much like Shirley MacLaine in What A Way To Go!  The most extreme get-up is a black vinyl body suit with a spiked headdress, photos of which ended up in magazines decades before we could see the movie. The final fantasy sees Giovanna going overboard to attract Carlo’s attention by striding down an avenue with a brace of dogs, and attracting a growing mob of aroused businessmen. She eventually performs a striptease before a Coliseum-sized audience of male admirers. Eastwood’s Carlo watches helplessly. He can do nothing, even when he transforms momentarily into a black-clad western gunslinger, and shoots down a dozen or so of his rivals.

Despite the elaborate trimmings and the visions of Silvana at her most elegant, this slight and shallow final episode brings The Witches to an end, not a climax. Although the excellently-directed Visconti episode is quality filmmaking, it wouldn’t provide the kick for a major finale either.

Arrow Academy’s Special Edition Blu-ray of The Witches is a stunning improvement over the weak presentations I’ve seen over the years. We can finally appreciate Giuseppe Rotunno’s glowing images, which now bring meaning to the head-scratching Pasolini episode. The bouncy, infectious Piccioni soundtrack is freed from the wow and flutter of older viewings. Silvana Mangano does indeed look glorious; the close examination of her designer eye makeup in the Visconti episode is pure mid-sixties artistry — still very classy.

The picture has been remastered in 2K in both Italian and English-language versions. Tim Lucas recommends that viewers skip to the English version for the final Eastwood segment. The lips match the English dialogue and Eastwood’s own voice is used. The Amazon extras description says that only the Eastwood section is in English, but the disc contains the full American cut, which is shorter by six minutes.

The one disc extra is Tim Lucas’s informative, thoughtful full-length commentary. Besides offering the lowdown on the production, the many interesting actors and production personnel (he even goes into the titles creator/sculptor and the special effects expert for the last segment), Tim contributes his personal reactions and observations, which are always interesting. Everything is explained except why De Laurentiis didn’t give more attention to this cinematic ode to his great star. I suppose we should be grateful that Dino didn’t inject his spouse into his The White Buffalo.

Arrow’s disc text gives a 121-minute length for the film, but the show times out at 111 minutes. Also part of the package is a 21-page illustrated insert booklet (on the first pressing only) with essays by Pasquale Iannone and Kat Ellinger.

Here’s an okay sampling of Piero Piccioni Piccioni’s catchy music cues for The Witches. It’s my favorite Piccioni music other than his sublime jazzy themes for Elio Petri’s The Tenth Victim.