This look at the ‘adjustments’ of old age and the pain of nostalgia is a prime opportunity to admire a pair of legendary actresses. David Barry’s play observes the intersection of several interesting personalities on one glorious late-summer day. Bette Davis and Lillian Gish earn our full attention, backed by memorable turns from Ann Sothern and Vincent Price, directed by Lindsay Anderson. 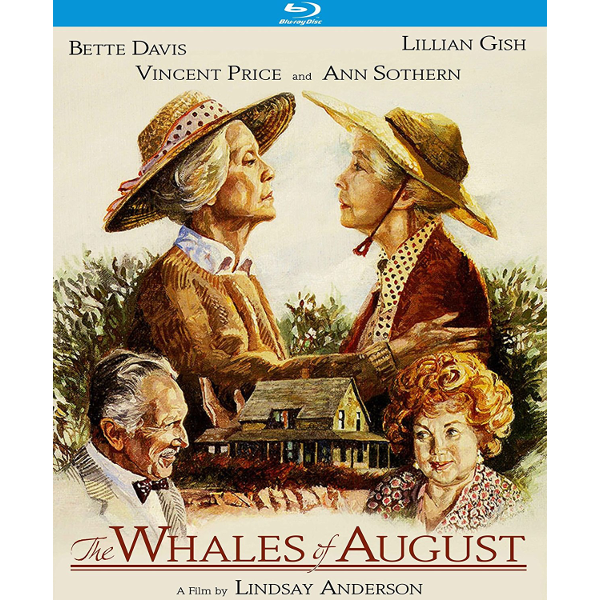 Every once in a while a ‘sunset’ movie comes along, a picture seemingly motivated by the desire to bring back impressive actors in twilight performances. Ageism has receded a tiny bit since the Golden Age, considering that actresses like Bette Davis, Joan Crawford and Olivia de Havilland weren’t that far into their fifties when they’d been thoroughly typed as has-beens. Grasping at examples, I can think of Katharine Hepburn and John Wayne in the wholly unnecessary Rooster Cogburn. The movie’s a big nothing but everybody wanted to see what they looked like, and how they could possibly act together. I still consider On Golden Pond to be a similar stunt casting deal, casting a workout-ready Jane Fonda opposite her father for the first and last time. Despite the stab at honest sentiment, for me that one came off as forced as well.

Not so 1987’s The Whales of August, David Berry’s adaptation of his own play about two sisters in their eighties. The stage play is a quiet chamber piece, without murders, scandal or anything ghastly. * The casting of Lillian Gish (age 93) and Bette Davis (79) wasn’t a stunt, as they are playing characters at their natural ages. Years before, Ms. Davis made a sound financial decision when she rebooted her career with several horror thrillers, but Whales would be deemed a class act in anybody’s book.

Five years were required to get it to the screen. With actors of this vintage I should think that production insurance was a big consideration. Vincent Price was the youngest of the four principals, at age 75 or 76. We all remember him in Tim Burton’s Edward Scissorhands (1990), where he was so ill that his part had to be greatly reduced; he would pass away just five years later. Ann Sothern was just two years older during shooting. She would make it to 101, and the relatively fit-as-a-fiddle Lillian Gish to 99. Although much younger than Gish, Bette Davis would pass away first, in 1989. Audible gasps were heard in theaters when her character first appears. The two strokes Davis had suffered are more than obvious, with half of her face gone slack and her walking made difficult. It takes a few minutes to settle into her slow dialogue rhythm, but once we’re adjusted to ‘old folks’ speed Bette Davis’s halting delivery sounds natural. Nobody is making an attempt to sound old. They don’t have to. 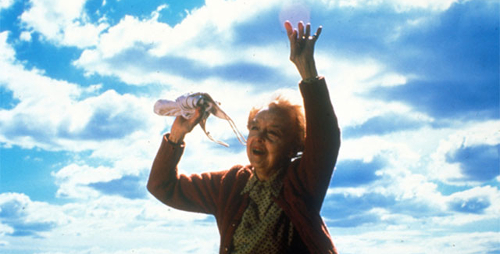 To its credit The Whales of August is not an exercise in fossil-watching, of stars dragging out something they should have quit years before. The drama does indeed take over, and by the end the actors have fully merged with their parts.

The filming took place at a Beach house on an island in Maine, not far from where the playwright set his original tale. Sisters Libby and Sarah Webster (Davis & Gish) are finishing out the season at their summer place before returning to Philadelphia. Libby is blind and having difficulty getting around; she’s also ill tempered and bossy. The endlessly patient Sarah weathers her sister’s various provocations, registering only disappointment at Libby’s negativity and undisguised fatalism, such as refusing to endorse the idea of replacing two windows with a larger picture window. Visiting is the loud, friendly handyman/plumber Joshua (Harry Carey Jr.); he’s followed by the agreeably nosy, vain but positively oriented Tisha Doughty (Ann Sothern). Tisha ignores Libby’s carping, while flirting with Mr. Maranov, another elderly island resident (Vincent Price). The always gentle and polite Maranov claims that in a bygone time he was a White Russian exile. Without means of his own, he’s been staying with a friend that recently died, and now must make another connection or return to the mainland. Both sisters’ mates died long before; and Sarah performs a birthday ceremony for her long lost lover who died in WW1. The day culminates in a dinner of the fish Mr. Maranov has caught. Libby unleashes her unsparing opinion of Mr. Maranov, and he responds by explaining himself.

The ladies and Mr. Price show that they definitely still have it in The Whales of August, animating a play made not of dramatic confrontations but delicate revelations and confessions. Neither the text nor the performances reach for cute, little-old-lady effects; life is what it is for these people and they cope according to their personalities. Sarah mostly caters to Libby, who feels free to grouse and complain. Libby doesn’t feel sorry for herself as much as she expresses her anger at being infirm. It’s convincing all right, as Bette Davis’s face is numb on one side, and she walks with the greatest caution.

What we’ve got is a little island where a few elderly homeowners behave much like the denizens of a retirement community. Spouses are long gone and fondly remembered. The slightly younger Tisha is certainly interested in finding a new man, and the tall, civilized Mr. Maranov seems ideal. Libby doesn’t say it outright, but she hints that Maranov might be a charming phony, telling grand stories about himself to live off the charity of sweet older women.

Despite the absence of ‘big’ conflicts, playwright Berry salts a few questions into the storyline. Will Libby and Sarah achieve a happier understanding of each other? Will Libby give in on the improvements to the cottage? The notion of watching the whales is pleasant, as the big activity of the day is merely taking a walk out to the cliffs to enjoy the fading light of summer. Two scenes are standouts. Sarah silently peruses her mementos of her lost lover, which gives Lillian Gish an opportunity to introduce a touch of silent playing technique. When she talks to herself she drops hints that the sweet relationship was also quite sensual. The other outstanding moment is a marvelous scene with Vincent Price, who reveals the truth behind his genteel manners. Maranov turns out to be a pauper, but not a fraud. Having no money and little way of earning any, he’s lived a strange life simply being a guest of various friends. Libby tries to shame Maranov for that, but his response is most surprising. Everyone has had to adjust to infirmities, limitations, losses and even humiliations. Libby and Sarah are together because each needs the financial support of the other, but they also need each other’s emotional support. We believe that Mr. Maranov will likely find another person more than willing to take him in.

Director Lindsay Anderson’s better-known features (If….,  O Lucky Man!,  Brittania Hospital ) are nothing like this reflective meditation adapted from a stage play. Vincent Price and Ann Sothern are noted for being accommodating players, but Bette Davis was of course famous for caustic behavior when she wasn’t happy. For whatever reason, we’re told that she clashed somewhat with Lillian Gish. Even at 93 Gish is said to have had her own indirect but forceful way of facing creative disputes, and more often than not prevailing. Viewers unfamiliar with the two famed stars might need to take a couple of minutes to accept Davis’ slow but staccato delivery, or to understand that Gish’s character is not feeble minded, just very patient. Whales rates highly among movies that show real respect for old people. I’m guessing that maybe that is why it played for so long in Japan.

The show is beautifully filmed to take advantage of the light at different times of the day in the balmy late August. A brief monochrome preamble shows a young Libby, Sarah and Tisha (Margaret Ladd, Tisha Sterling & Mary Steenburgen) at the house in a bygone year, wearing pre-1920 dresses. Tisha Sterling is Ann Sothern’s daughter, while Mary Steenburgen was at the time married to director Anderson’s star Malcolm McDowall. Although attractive in itself, the prologue doesn’t seem all that necessary.

* Indeed, my adult daughter has seen What Ever Happened to Baby Jane? and Night of the Hunter; two minutes into The Whales of August she asked, ‘These two aren’t going to start killing each other, are they?’

The KL Studio Classics Blu-ray of The Whales of August is a fine encoding that brings out the life in the picture, the sunny Maine mornings and the warm atmosphere in Sarah’s summer house. The sensitive cinematography doesn’t mind getting close to its subjects. The longer we look at the ladies the more beautiful they seem, even the gaunt Bette Davis.

The exhaustive extras are dominated by producer Mike Kaplan, who provides a commentary, isolated vignettes on various subjects and the text for a 16-page insert pamphlet. Kaplan (or somebody) retained the original uncut talent interviews from 1986, which give us even more insight into the show. They may have been filmed as publicity filler but each actor offers interesting, candid thoughts on the filming. Also, a trio of new interviews give us the memories of all three prologue actresses.