Ingmar Bergman’s tale of murder, retribution and God’s forgiveness may be the perfect entry point for art-film appreciation — it’s immediately accessible yet genuinely profound. It’s also a compelling miracle story. Max Von Sydow is the proud father who fills himself with a spirit of vengeance that contradicts his newly-adopted Christianity. 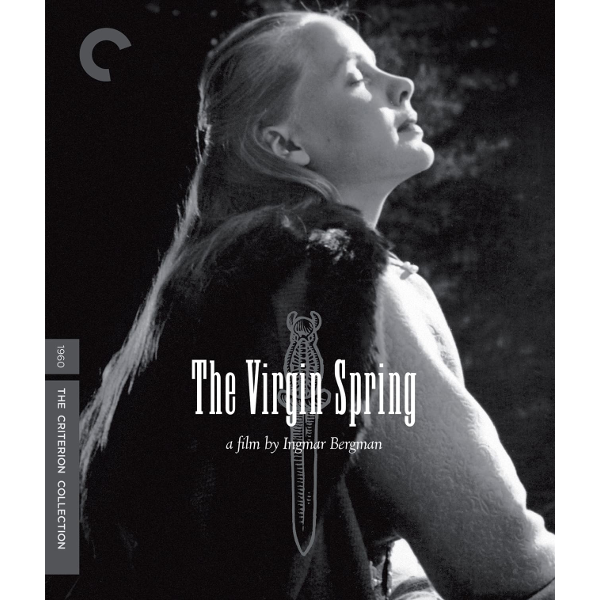 I can’t help it, but the only ‘miracle’ movies that inspire me to core thoughts of faith and religion are both Scandinavian: Dreyer’s Ordet and this medieval tale from Ingmar Bergman. It earned 1960’s Oscar for Best Foreign Film, but that’s the least of its accomplishments. It has everything to move an audience, including what might be considered commercial elements in its tale of violence and revenge. We’re told that it is a transitional film for the director, from period pictures of the 1950s to his more modern and psychological efforts of the ’60s. The Virgin Spring pulled in a wider audience than did many of Bergman’s later pictures. It also cemented the renown of Max von Sydow, Bergman’s leading man from The Seventh Seal. Bergman often skipped this title when writing about his career, perhaps because he did not write it, or because it was popular in a conventional way. That’s too bad, as it is likely his most accessible and satisfying early film. Audiences I’ve seen it with have been left in stunned silence at its finish. Few films feel so complete, so ‘right’ when the last image fades.

(plot spoilers) It is medieval times, when pagan ways were giving way to the new faith. Farmer and ex-soldier Töre (Max Von Sydow) has converted to Christianity to please his wife Märeta (Birgitta Valberg) and is sufficiently prosperous to spoil his beloved daughter Karin (Birgitta Pettersson). Karin dresses in finery to deliver candles to the local church, accompanied by her adopted sister, the pregnant and unloved Ingeri (Gunnel Lindblom). Ingeri broods with jealousy and secretly prays to the pagan god Odin to strike Karin down. Karin is alone and unprotected when she meets a trio of herdsmen on the trail – who aren’t as friendly as they appear. Far removed from the psychological ruminations that would soon dominate his work, Ingmar Bergman’s third film with Max Von Sydow reaches far into the past for a grim morality tale. The original story idea came from an ancient ballad and was enlarged by screenwriter Ulla Isaksson to dramatize the conflict between Sweden’s newly adopted Christianity and its old pagan gods. Von Sydow’s Töre may have converted but human nature has not, and the most visible addition to the inner lives of the characters seems to be a thick fog of guilt. The working girl Ingeri voices her resentment by calling to her secret pagan gods, and feels all the more debased. Mother Märeta is virtuous but appears to worship the purity of her picture-perfect daughter, to the point that she’s jealous of the affection young Karin gives her father.

As for Karin, she’s a sheltered and self-centered jewel of the family incapable of recognizing guile or malice. She is pure of heart, but faith alone is little protection from a brutal world. Karin doesn’t return from her trip, and proof of her murder comes in the night. The herdsmen have sought shelter in Töre’s own house, and present Märeta with the torn and bloodied dress that Karin was wearing only hours before. The parents are transformed into calculating killers. Töre reverts to rituals of the past, taking his armor and weapons from a trunk and preparing himself by striking his skin with birch branches. The family forgets its new faith to take a bloody vengeance.

In ninety minutes this one picture gathers up the extremes of human emotions. We’re constantly shown contrasts — pride and charity, familial love and seething resentment. Unlike horror films and other genre pictures about bloody violence, there’s no displacement of cause and effect. Töre represents only himself, not society’s everyman. The killers are almost feral in their character, and the youngest of them can be considered an innocent as well — the mother certainly feels that. The parents are immediately struck by guilt, for their acts of bloody vengeance and for the pride they have for their perfect daughter — did a spiteful God reclaim her as punishment? The miracle has an aspect of pagan magic, but they receive it as a gift of forgiveness from God. That’s what it feels like to us as well. The Virgin Spring is beautifully directed. Left without music, the two violent scenes are depicted in powerful, wordless sequences, that are tense in a way that later more explicit movies are not. The innocent Karin is despoiled and murdered by three vile wanderers and revenged by her father in an orgy of bloodletting. Töre and Märeta recover their daughter’s body with tenderness and are rewarded with a miracle of faith, a harsh fairy-tale ending that provides an emotional release. Töre doesn’t understand how God could permit such evil to occur yet humbly atones for his sins with the promise to build a church.

The Virgin Spring is an almost perfect film and as such is often recommended as an introduction to Ingmar Bergman. It was the director’s first full collaboration with cameraman Sven Nyqvist. Bergman’s 13th century is recreated in a spring forest where the last of the winter snowfalls have yet to subside. Töre’s little wooden compound is dominated by an imposing carved Christ on the crucifix, yet his dining hall is decorated with definite pagan carvings.

The Criterion Collection’s Blu-ray of The Virgin Spring is a perfect encoding of Sven Nykvist’s first collaboration with director Bergman. The finely graded B&W images convey a feeling of depth, and help us admire the impressive settings — Töre’s wooden house-compound ‘feels’ strong and permanent, even the mud in the yard. Karin’s beautiful clothing for her pilgrimage looks all the more elegant, as it would seem impossible to keep anything clean.

The extras are identical to those on the older (2005) DVD but they’re so good that it’s hard to know how they could be improved. Ingmar Bergman author Birgitta Steene offers an excellent analytical audio commentary. Disc producer Johanna Schiller’s fine interview documentary features both of the film’s young actresses 45 years later. Birgitta Petterson remembers the filming of the rape scene as being bearable because the lead herdsman was played by Axel Düberg, a personal friend. Looking at early portraits of the beautiful Gunnel Lindblom we are struck by her close resemblance to Bergman’s other star Bibi Andersson. Ms. Lindblom would later become a director. Director Ang Lee’s introduction should definitely not be seen before viewing the movie — too many minor spoilers. The disc offers plenty of direct Ingmar Bergman input through audio recordings made at an AFI seminar in 1975. He apologizes for his English, and then gives an enviably articulate long talk-discussion. The fat liner booklet contains essays from Peter Cowie and Ulla Isaksson, and the original source ballad. The one item not repeated from the earlier booklet is a letter from Ingmar Bergman making a case against censoring the film’s rape scene. It was cut for the first American release just the same. Bergman makes his opinion of Töre’s violent response very clear — at least one killing is an indefensible murder.

The disc offers a choice of the original Swedish soundtrack with removable English subtitles, or an English dub track.