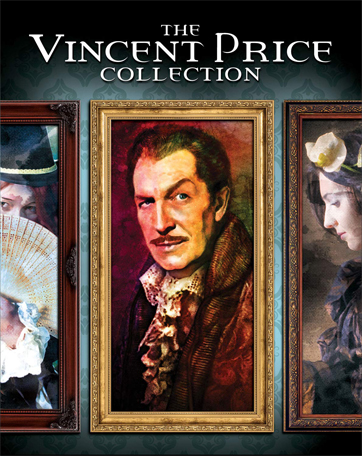 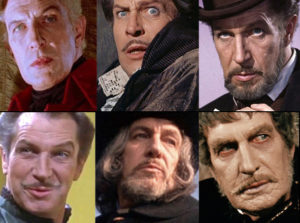 The Vincent Price Collection, the first in a series of Blu-ray sets celebrating the beloved actor’s glory days, arrived in 2013. They sold like hot cakes, quickly going out of print only to pop up on eBay with price tags that would make Bill Gates tremble. That initial release has just been reissued and is a near-duplicate of the original. All the films are here including The Fall of the House of Usher, The Pit and the Pendulum, The Haunted Palace, Witchfinder General, and The Abominable Dr. Phibes. But there are changes—the Poe-related intros Price recorded for a PBS affiliate have been removed due to rights issues. And something new has been added; The Masque of the Red Death, which was part of the 2013 release, has been restored and expanded. That Anglo-American production is a high point for Price, his director, Roger Corman, and in particular future director Nicolas Roeg—thanks to his kaleidoscopic cinematography this historical horror show becomes a pop art take on The Seventh Seal. 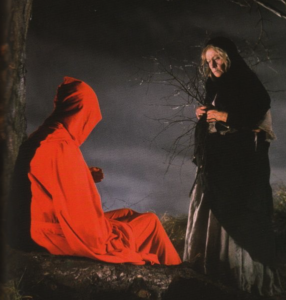 Roeg’s mood lighting sets the scene; hooded men move along a lonely trail at night—their bright-colored robes fairly glowing against the burned out landscape. The effect is luminous, a medieval Benetton ad. There’s a plague sweeping the countryside but these monkish figures aren’t here to save us, just look fashionable while tallying up the death toll. The only safety to be found is within a fortress on the outskirts of the village where a different kind of danger waits; a cruel despot roams its corridors, bullying and debasing one and all—including the sycophants who’ve traded their souls for a whiff of power. This is Prince Prospero, a prototypical tyrant getting ready for a night of fun, games and satanic horseplay—Walpurgisnacht with party favors. The setting is as grim as could be but Corman chooses to portray the horror as a ravishing fashion show—a movie with color so vivid it rivals any MGM musical. 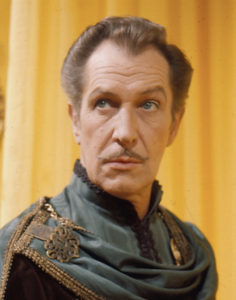 Corman’s film looks more sinister—and more relevant—by the minute. So timely, in fact, that The Masque of the Red Death—the story of a degenerate monarch who gets a taste of his own medicine—is currently trending on Twitter. The spare plot could be scribbled on a napkin with room to spare; it takes place in a single evening and rarely ventures outside the palace. Despite some choice repartee, Charles Beaumont’s dialog is constantly superseded by the glorious cinematography. Roeg’s camera glides on a steady track throughout the chambers of Daniel Haller’s interiors and like a box of Cracker Jacks, there’s a surprise in every room—some doors open to such incandescent hues they’re like flowers blooming, others reveal dank and heavily draped corridors suitable for a black mass. 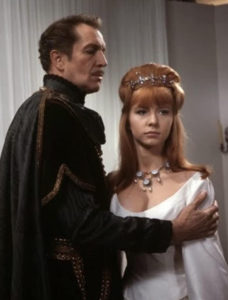 Jane Asher plays Francesca, a radiant darling of the beleaguered village, and she fits right in with Haller and Roeg’s modernist color scheme; she’s not wearing Carnaby Street but she has a swinging London appeal that excites even a hard bitten buzzard like Prospero. He coerces the waif into the palace along with her lover and her rebellious father—the two men will be tortured for their troubles while the young woman is groomed as a replacement for Hazel Court who plays Prospero’s soon-to-be ex-lady friend.  An infernal soap opera to be sure but Prospero is a master manipulator as is Price in his own way—he juggles the two women with self-amused ease while torturing peasants on the side and still finds time to plan the entertainment for that evening’s ball—he’s like Frederick Loren in tights.

The prince promises a long night of cruel diversions including a dance recital performed by a tiny ballerina named Esmerelda and her equally small beau known as Hop-Toad. The childlike danseuse catches the eye of Prospero’s Jeffrey Epstein-like associate, a beetlebrowed perv played by Patrick Magee who, since this is fiction, gets his just deserts in an appropriately fiery death—which inadvertently acts as a fitting prelude to the film’s rococo centerpieces; Court’s sacrifice to satan and the Masque itself. 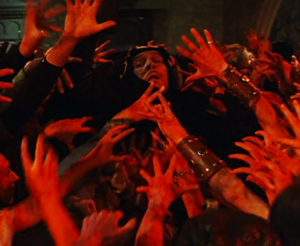 Court’s ritualistic self-abasement plays out in a slo-mo synthesis of a Vegas lounge act and a Victoria’s Secret Halloween show. The actress gives it all she’s got—and that’s a lot—writhing on an alter in a transparent negligee while a chorus line of boy toys act as her backup dancers. Where an unfettered Court puts on a rousing show in the catacombs the masked ball is staged with a more sophisticated bent—a dance sequence that would not be out of place in a Max Ophüls film. Roeg’s camera gets a workout, swirling in and around the damned souls in their finery—and just when the ball is at its most orgiastic an uninvited guest arrives—it’s the Red Death in human form, dressed in a crimson robe and veil. One by one the revelers are cut down by this unstoppable force—rivulets of blood stain the fine frocks and party dresses yet they continue to dance, turning as red as the plague that infects them. It’s too predictable, but certainly fitting that when his veil is removed the monster is revealed as the otherworldly doppelgänger of Prospero, the human virus. Any hope of a happy ending is doused as the final scene circles back to the robed figures under the moonlight where they escort a small child to an ambiguous fate. 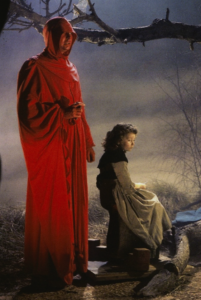 Restored in 2019 by the Academy Film Archive and The Film Foundation, this new Masque restoration looks gorgeous—though the extra seconds of added material scattered around—a bit more of Hazel Court’s grisly fate, some tame dialogue concerning God, have little effect. The restoration also features a new audio commentary with film historians Kim Newman and Barry Forshaw and an introduction from film historian Stephen Jones. All the other films maintain the same beautiful transfers and extras found in the original release (except for Price’s PBS intros). You can read more about the films and the voluminous extras, plus the restored scenes for Masque, in Glenn Erickson’s review from 2013.

Here’s Mary Lambert on The Masque of the Red Death: