Is it a classic? Well, not exactly, but it’s also not a typical disappointing ’40s Z-picture. Screenwriter Leigh Brackett pens a nice twist on the Dracula motif, and actor John Abbott is genuinely impressive as what is surely the most low-key vampire on the books. Plus a sexy dance from Adele Mara! 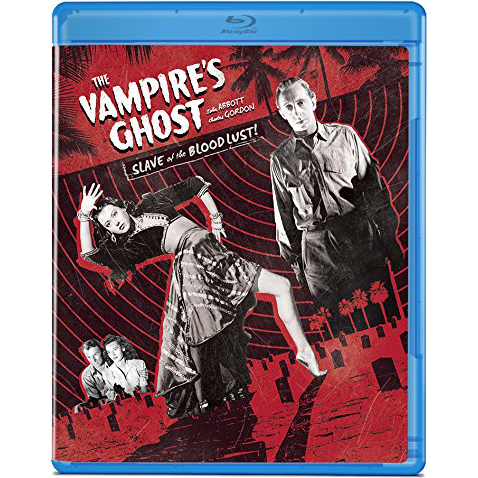 When Republic dabbled in genre work away from their serials and westerns, the result was often embarrassing. One horror title due for an upward bump in reputation is 1945’s The Vampire’s Ghost, a tiny little ‘B’ picture that’s just under an hour in length. Filmed on sets familiar from Republic’s jungle-based serials and played by a tiny cast, we see barely any production outlay beyond the film stock.

A vampire tale in an odd setting and without the traditional trappings of bats, capes and foreign accents, this sedate thriller instead seems influenced by Val Lewton’s shockers over at RKO. Science fiction writer Leigh Brackett turned to screenwriting after a happy start in the pulps, where she later became known as the Queen of Space Opera. Her first screenplay The Vampire’s Ghost is certainly better than Republic’s usual stack of entrances and exits buffered by declarative expository lines. Although the supporting players are stock, the main villain is a fascinating re-think of the standard vampire character. In cheapie genre pictures a minor film actor can occasionally score a leading part. As with Stanley Ridges’s ‘stellar’ turn in the Universal picture Black Friday, this time around the all-but-forgotten fine actor John Abbott gets the spotlight. Abbott may not have star appeal but he carries the picture almost singlehandedly.

Leigh Brackett’s vampire tale plays out in the central African township of Bakunda, where a plague of blood-drained victims force Father Gilchrist (Grant Withers) to assure the nervous natives that God hasn’t abandoned them. Merchant Tom Vance (Emmett Vogan), his daughter Julie (Peggy Stewart) and her fiancé Roy Hendrick (Charles Gordon) feel certain that the mysterious club owner and gambler Webb Fallon (John Abbott) may be a vampire. Webb seems never to lose at cards. He wins all the possessions of sea captain Jim Barrat (Roy Barcroft) and then publicly gives them away, to a barfly. But Webb befriends Roy, and is invited to the Vance house for dinner, where he meets and becomes interested in Julie. On a safari to investigate a village where more deaths have occurred, hostile natives attack. Vance’s servant Simon Peter (Martin Wilkins) becomes convinced that Webb is a devil-vampire and tries to kill him with a silver-tipped lance. Admitting the truth to Roy, the mortally wounded Webb Fallon admits that he’s an undead creature hundreds of years old. He then hypnotizes Roy with the instruction never to reveal his identity. Roy is then made to carry Fallon to high ground and place a box of his sacred earth under his head. When the full moon rises, Fallon is cured. Back in Bakunda, Webb’s exotic dancer Lisa (Adele Mara) joins with Jim Barrat to cheat Webb at cards, in retaliation for Webb’s cleaning Jim out earlier. When they both turn up dead, Vance and Gilchrist know something must be done. But Roy, still hypnotized, cannot reveal what he knows. Having already put Julie under his influence, Webb Fallon has decided to leave Bakunda, with her as his undead companion.

I suppose the story is Dracula in a nutshell, transposed to the Dark Continent. If one is looking for dynamic monster action or Universal-style chills, there’s not a lot here. But there are some interesting genre twists — Ms. Brackett’s play with standard gothic trappings is first-rate. The human characters are still rather dense dimwits, ignoring the evidence piling up before their eyes. Julie alone scoffs at the notion of real-life vampires, and there’s an unstated acceptance of the power of the ‘jungle magic’ around them. On one level Webb Fallon is more or less a standard Republic Studios villain, running a saloon and apparently using his Evil Eye skills to cheat at cards. The nominal hero Roy doubles as a quasi-Renfield character: the vampire’s sincere confession forms a bond between them that feels particularly unsavory, in a Conrad secret-sharer way.

Webb Fallon’s supernatural back story is well judged. He apparently became a vampire four hundred years ago just by ‘ruining the lives of two lovers,’ no specifics offered. Yet the part has depth and feeling because of John Abbott’s performance. The Shakespearian actor had played Prospero on early BBC TV (1939) but in Hollywood showed up mostly in small character parts. Abbott underplays Fallon, telegraphing no hint of hidden malice; he barely reacts when he discovers that Lisa and Barrat have cheated him. His vampire attacks are all mostly suggested. In the first scene the camera takes Fallon’s POV and we only see the face of his victim. In other attacks, victims find themselves eclipsed by ominous shadows. But there is no violence. We’re told about bite marks on necks but only once do we see Fallon about to chomp down on a victim. Simple prayer rescues Roy from his hypnotic trance, and the priest nails the vampire with the shadow of a cross — which is practically the only shot in the movie that aligns with standard vampire iconography. We can easily see how The Vampire’s Ghost would attract almost zero attention. Actor John Abbott’s screen presence is more appropriate for a monk, or a sad academic. He’d be perfect for the alcoholic choir conductor in the play Our Town. Abbott’s innovative low-key bloodsucker is a fine performance, but horror fans expect something a little more imposing. Is it unwise to guess that more than one low-budget horror tried to imitate Val Lewton’s popular movies, by imposing Lewton’s psychological approach on standard monster plotlines? I’m thinking of Universal’s She-Wolf of London and Columbia’s Cry of the Werewolf and The Soul of a Monster.  All three disappoint mainly for lack of conventional monster thrills.

Most refreshing is the use of black characters in the movie. None are dolts or cowards, and Simon Peter (Martin Wilkins) is the only one to apply common sense to the practical business of Vampire Hunting. It’s Simon Peter who deduces that a bullet fired in the jungle had to go through Webb Fallon before hitting one of the native bearers; he then sneaks into Webb’s tent to check out the bullet holes in Webb’s shirt. Simon Peter also knows that the right way to dispatch an African vampire is with a spear dipped in silver. Where the natives obtain the pot of silver we see, nobody says. The other asset to The Vampire’s Ghost is Adele Mara, a beauty who performs an effective sultry dance. Republic had little luck with such scenes beyond its singing cowboys. Ms. Mara’s Lisa looks appropriately exotic, ready for prime time. Somebody cared, as her number is given decent musical backing and better lighting and direction than we would expect. After working with Xavier Cugat, Adele Mara didn’t have much of an acting career. But she did turn up in small parts in several pictures that have lasted, such as John Wayne’s The Sands of Iwo Jima.

Set aside Leigh Brackett’s interesting story and John Abbott’s sterling performance, and The Vampire’s Ghost shapes up as a standard Republic product, a ‘B’ picture ground out as program filler. Director Lesley Selander moves the camera a little, mainly to truck in and out at the finish of a scene. Those few ‘menacing shadow’ shots look okay as film stills, but the scenes in the movie don’t generate a scare reaction. A few shots of feet in a ‘stalking’ scene may be inspired by Val Lewton, and maybe not. Although the African setting provides situations comparable to I Walked with a Zombie — in particular Julie’s hypnotized night stroll – Republic’s visuals are mostly prosaic, lacking the depth and beauty of those in Lewton’s picture. Republic just wasn’t into the kind of artsy atmospherics that elevate classic horror. Webb’s saloon is a little more interesting than the average Republic barroom, but none of the actors is memorable, not even the romantic leads. Somebody in production didn’t read the script carefully: Bakunda is described as being a port city, but the opening African map places it in the middle of the continent.

Surprisingly, the black African context is the only half-realistic element. Simon Peter works mostly in the background, quietly figuring out the mystery. He’s genuinely moved when his friend Taba (Zack Williams) is killed. The native drums that add to the suspense factor are used with intelligence. We see several large drums in the native telegraph system. The visuals are only so-so, but the changing rhythms make us feel that something important is happening. I have no idea if the ‘jungle drum’ motif is entirely a phony cliché, but it sure works in selected movies, even Tarzan pictures. Of course, the best use of drums is back in Lewton and Tourneur’s I Walked with a Zombie. One of the most effective chill effects in that picture is when the drums suddenly stop, leaving a ghastly silence.

Who knows how it happened, but young Leigh Brackett was almost immediately working on Howard Hawks’ The Big Sleep. She’d continue with a stellar screenwriting career, including several more of Hawks’ best pictures. The Vampire’s Ghost is worthy of closer study just for her involvement.

Olive Films’ Blu-ray of The Vampire’s Ghost is a terrific encoding of a picture that likely hasn’t been out of the vault since Truman was in office. The image is pristine, as is the soundtrack; only the title sequence looks a tiny bit dull. Adele Mara’s dance number is a winner — we can see why Xavier Cugat would want her fronting his orchestra.

Olive offers no extras for what is a genuinely obscure horror item. Some word of mouth will be required for news of this one to get around. I wasn’t aware of its existence, but now I’m sure I’ll spot John Abbott again, whenever he pops up in another picture.