Charles Bronson plays a real-life Mafiosi in a period picture with a fine script, some good performances and a production so sloppy that the whole thing could be called The Anachronism Papers. Joseph Wiseman and Lino Ventura bring additional tough-guy star-power, and Bronson actually commits himself to the role — quite a change of pace for one of his later pictures. 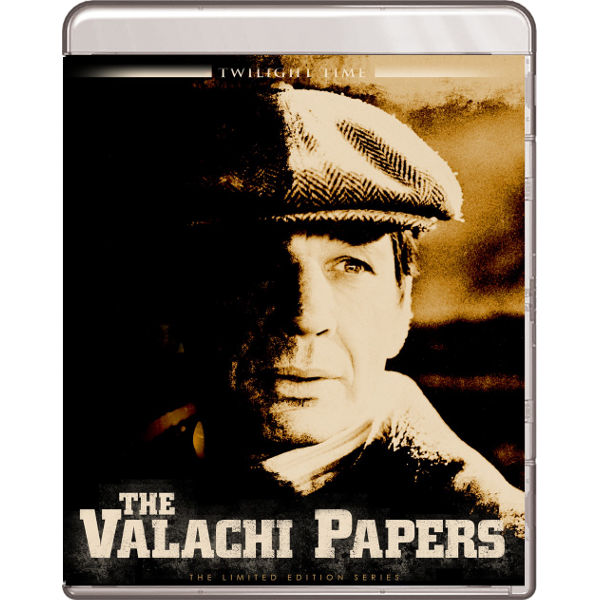 In 2001 I received the plum assignment of editing a montage video for the Oscars TV broadcast. Mine was for cinematographer Jack Cardiff, so the problem was how to choose just 2.5 minutes of great shots from his work. Other montage editors didn’t have it so good. The cutters for screenwriter Ernest Lehman’s montage found it difficult to nail down ‘big’ movies that weren’t simply adaptations of another writer’s work. The editors trying to make a montage of the ‘great career’ of Dino De Laurentiis were really up a tree. De Laurentiis was a busy producer, but once you leave the 1950s and Federico Fellini, his notable features are few and far between — and lacking in the kind of stature needed for an Oscars montage. You can’t make a full montage just out of shots from his War and Peace, Barabbas, The Bible and Serpico. His other pictures that people will recognize are dogs or outright exploitation, even if we like some of them: Barbarella, Death Wish, Mandingo, King Kong ’76, The White Buffalo. When the De Laurentiis montage went up, laughter was heard from the Academy audience. Just by luck of the draw, my montage got all of the attention. People magazine ran a sidebar article about how that particular montage had raised awareness for Powell & Pressburger movies.

De Laurentiis has his name on quite a few excellent movies, but most are known here only as art house obscurities. In the 1970s he alternated between those and some pretty obvious box office fodder. Charles Bronson had a supporting part in the producer’s 1965 The Battle of the Bulge but he later came back for five starring collaborations. Peter Maas’ 1968 novel The Valachi Papers covers the history of the Mafia (the Cosa Nostra) in the U.S., as told by Joseph Valachi, a high-ranking made man in the organization who had testified for the government a few years before. Considered a hot film prospect, for a couple of years it shared newspaper editorial space with Paramount’s The Godfather, Mario Puzo’s fictitious tale of ‘the five families’ in New York. Neither show copied the other, but it’s definitely a case of high road / low road. 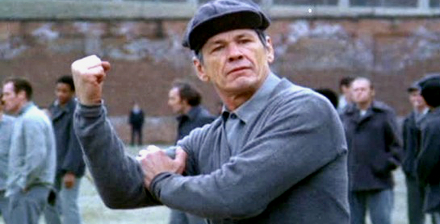 Directed by Terence Young, the man who put Sean Connery’s James Bond 007 on the map, The Valachi Papers is based on genuine mobster testimony yet is pitched as a mid-grade vehicle for action star Charles Bronson. Its main strengths are a quality screenplay by Stephen Geller of the superior Pretty Poison, and some excellent performances. Producer Dino’s flair for flaky publicity came to a peak with his mostly wretched King Kong remake, and its fraudulent claims to secure Academy nominations for special effects. The press releases for Valachi claimed that the production was threatened by the underworld, and forced to cut short its New York production schedule before heading back to the De Laurentiis studio in Rome. I suppose that’s credible, but didn’t the mob put the screws to every New York production of the ’70s?

The story begins in the early 1960s, when mob chieftain Joe Valachi (Charles Bronson), realizing that his enemy Vito Genovese (Lino Ventura of Army of Shadows) has put a kill order out on him, decides to talk. Both men are serving long sentences but nothing has changed; Joe must ward off several hit attempts abetted by the prison guards, before FBI agent Ryan (Gerald S. O’Loughlin) puts him under special protection and gets out his notebook. Valachi tells the entire story of his recruitment into the mob and his service for a succession of bosses. Most would eventually be murdered by their own ‘loyal’ colleagues. His first capos are the cultured Gaetano Reina (Amaedeo Nazzari of The Sicilian Clan), the slick Lucky Luciano (Angelo Infanti of The Godfather) and the Old-world authoritarian Salvatore Maranzano (Joseph Wiseman of Dr. No). As the years pass we see a succession of violent crimes and even more violent gangland rubouts; Valachi mostly remains a driver while his thug accomplices Gap (Walter Chiari of Chimes at Midnight) and Tony Bender (Guido Leontini) do the dirty work. New boss Vito Genovese helps broker Valachi’s marriage to Gaetano’s daughter Maria Reina (Jill Ireland), and for some time holds power with his vicious underling Albert Anastasia (Fausto Tozzi of El Cid). Genovese is deported for a couple of years, and when he comes back all hell breaks loose. Gap is made the victim of Vito’s vicious retribution but the better-organized Feds get the drop on everyone. In jail, Valachi hopes that his testimony might break the backbone of the mob. 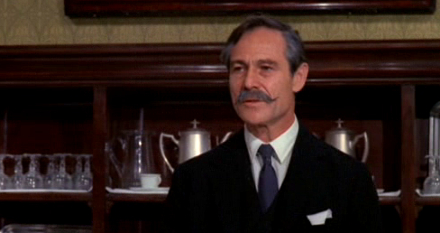 The Valachi Papers has a solid script that salts in plenty of authentic-sounding dialog and references, as when Joe refers to an older, Old World Mafia don as a ‘Joe Mustache.’ The characters and relationships are strong, and most of the casting is spot-on. Joseph Wiseman comes off the best, with a powerful performance as the traditional capo who reads eight languages and bases his decisions on his studies of Julius Caesar. French actor Lino Ventura looks more Sicilian than anybody; he exudes real strength and decorates the movie with his ever-present scowl. Everybody else looks great, with Walter Chiari having the meatiest role as a foolish friend who shacks up with Vito Genovese’s woman while Vito’s out of the country.

Charles Bronson is unusually attentive in his performance, as if impressed by the presence of actors Ventura and Wiseman. At this point Bronson began to insist that his wife Jill Ireland star in each of his pictures. She’s not at all good, but they do have one fairly amusing scene together when Valachi and Genovese come to ask for Maria’s hand in marriage. While Vito goes through the formal moves, the cloddish Joe chows down on the goodies offered by Maria’s mother.

Since the dialogue is all post-dubbed, The Valachi Papers never had a chance of competing with The Godfather. Bronson. O’Loughlin and Wiseman sound fine but most everybody else has that canned quality that convinces us that substitute voices are being used. It’s the same problem that makes the English-language dubbed version of The Sicilian Clan seem so bogus. 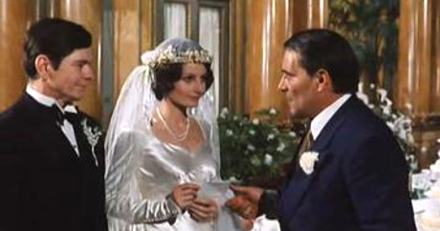 The real drawback is the lack of a decent production. Did the Mafia interfere with the shoot, or did De Laurentiis’ line producers pocket the money and film Valachi as if it were a TV movie? There is almost zero attention to detail or authenticity in the costumes and haircuts. Most of the sets are just perfunctory and the same four period cars pop up everywhere. We have no trouble with an anachronism slipping through here or there but the glaring gaffes in this show are continually pulling us out of the picture. Cars from the 1960s pop up everywhere in scenes taking place in the 1930s, and not just as details in the background. One shot of Valachi driving shows a 1960s sedan in the next traffic lane, so big that we can almost read the license plate.

Perhaps flaws like that are rushed editorial decisions — in a scene where Gaetano Reina initiates Valachi with a pinprick to the finger, the zoom lens shows a drop of blood on the pin before the fact, clear as day.

It looks as if director Terence Young did his best under trying circumstances. There are dozens of sets and a few parties and meetings with over a hundred extras, but everything looks rushed and superficial. In an interesting screenwriting touch, Valachi is shown a thick stack of photos taken at gangland slayings early on, and the film then proceeds to dramatize most every one of them, each a gory slaying by pistol, knife, machine gun or garrote. It’s all done in an artless but effective semi-docu fashion, much like the gangland action scenes in Roger Corman’s The St. Valentine’s Day Massacre. Remember kids, if you ever become a gangster, don’t ever go into a barbershop or allow the people you’re eating with to suddenly excuse themselves.

The Valachi Papers begins with a text title that attempts to nullify the bad rap being handed out to Italians, and dialogue later on reminds us that other underworld ethnicities are in on the rape of America as well. Valachi testifies, and is shocked to find that nobody in Congress wants to take serious action against crime. They value the hearings as a show to get votes — even the inquisitors take care to distance themselves from any notion of being anti-Italian. When Valachi referred to the Mafia as the Cosa Nostra, we’re told that it was the first time that name was made public.

The Godfather is legend but The Valachi Papers is simply one of the better (read: watchable) Charles Bronson attractions of his cash-in years, when he could finally charge producers what he was worth. It’s not quite as junky or lamentable as a Chuck loser like, oh, Breakout, but nowhere near as good as the exciting Hard Times. Bronson fans will enjoy his focused, attentive performance though — he doesn’t phone this one in.

The Twilight Time Blu-ray of The Valachi Papers is an excellent encoding of this picture, which looked pretty wretched in older Columbia TV prints. Aldo Tonti’s cinematography is nothing to write home about — even scenes stag right in lower Manhattan fail to give us a look at the terrific scenery.

Every time a new date & location title introduces a scene, the image quality goes down sharply due to a weak optical dupe. It’s not a good-looking picture but with this encoding it is the best I’ve seen it by far — the widescreen framing makes some scenes more attractive. The clear audio only heightens the feeling of the canned dialogue re-dub, which ranges from good to terrible.

Twilight Time offers a partial isolated music track for Riz Ortolani’s score. The only extra is an insert pamphlet with Julie Kirgo’s welcome liner notes. I had no idea that The Valachi Papers waged a publicity war with The Godfather but it makes perfect sense. Ms. Kirgo has the good performances to compliment, and points out a number of parallel events in the two movies, one a dry recounting of mob killings, and the other a romantic interpretation. With all the real Mafia family names being used, I’m sure there are mob buffs out there that would consider the fairly truthful The Valachi Papers to be a great picture.

I didn’t notice it, but I’m told that the World Trade Center is visible in one scene. With that and the near-surreal appearance of the ’60s car next to Valachi’s, I hereby dub the movie The Anachronism Papers.