Horton Foote strikes again, with a warm and thoughtful tale of life as it was lived in East Texas in 1950. Geraldine Page won an Oscar for her unguarded portrait of Carrie Watts, a woman who has outlived her peers and been uprooted from an ideal hometown of her youth. Her trip to recover her life becomes a bittersweet acknowledgment that some things just need to be accepted with as much grace as can be mustered. 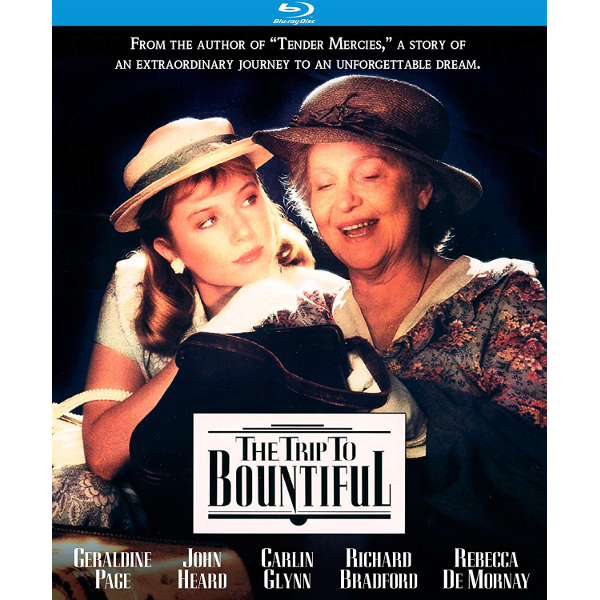 They say ‘you can’t go home again’ but stories reaching back to Odysseus have found the theme to be universal — human consciousness at some point or another wants to seek out the source. Out here in California, such efforts are usually frustrated. The very streets of my mother’s home town, Mountain View, have been erased by Silicon Valley- related development. San Bernardino has devolved so much, it’s too depressing to even stop by. Even in Hollywood, dozens of places where I worked years ago have vanished, replaced by new developments. Much of the memory landscape of my adult life is gone too, as if it never existed. Horton Foote knows the theme well. There have been many good adaptations of Horton Foote’s books, plays and teleplays. The most famous is To Kill a Mockingbird but there are also his Robert Duvall shows Tomorrow and Tender Mercies and his impressive ‘Story of a Marriage’ series about a Texas family and starring his daughter Hallie Foote, 1918, On Valentine’s Day and Courtship. Most viewers have seen his adaptations of works by other authors, such as Harper Lee’s To Kill A Mockingbird, and films based on his own plays, like Baby the Rain Must Fall and The Chase. Foote’s plays often circulate around East Texas towns and the backwoods people; as with William Faulkner characters from one play threaten to bleed into another.

This film adaptation of The Trip to Bountiful almost didn’t get made, as it had originally starred Lilian Gish on the stage and Foote wouldn’t let another actress do the role. But in 1985 Foote’s cousin, director Peter Masterson talked him into getting this exceptionally good film going. It ended up earning Foote a writing nomination, and Geraldine Page the Oscar for Best Actress. Masterson has quite a versatile career of his own, as a character actor (The Exorcist), writer (The Best Little Whorehouse in Texas), and director (Full Moon in Blue Water).

As with many Foote plays, The Trip to Bountiful is about plain-spoken common people, the kind that live and struggle and pass on without making a big mark in history. In Houston, Texas, the aging Mrs. Carrie Watts (Geraldine Page) feels like a prisoner. She lives with her son Ludie (John Heard) and his unhappy wife Jessie Mae (Carlin Glynn) in a small house. Jessie Mae isn’t the forgiving type and exaggerates all of Mrs. Watts’ faults. For her part Carrie sulks quietly and plans for the day she can skip out with her Social Security check and return to Bountiful, the town of her idyllic youthful memories. Carrie eventually sneaks away on a bus, with the help of Thelma (Rebecca De Mornay), a soldier’s wife en route to her in-laws. But Carrie loses her purse on the way, and bus agents and a Sheriff (Richard Bradford) could betray her at any time. Ludie and Jessie Mae are searching desperately for Mrs. Watts, who doesn’t know that re-zoning has erased the place she knew as Bountiful; she’s intent on finding a ghost town no longer listed on any map. The Trip to Bountiful is a simple idea beautifully presented. As with most of Horton Foote’s dramas, by the time we learn to know the characters, even the more troublesome among them are human and sympathetic. Ludie (John Heard of Cutter’s Way) is repeatedly defeated in his attempts to keep Jessie Mae and his mother away from each other’s throats. He blames himself for not doing well enough at his job to have a bigger house, to start a family, etc.. Jessie Mae is shrill, shallow and vicious to her Mother-In-Law, but her behavior is more than understandable given the situation. Carrie Watts idly sings hymns all day long and cultivates other nervous habits that get on Jessie Mae’s nerves. The younger woman is convinced it’s an effort to drive her nuts.

Carrie’s anxious home life makes her flight to a place that no longer exists all the more pitiful. As we know that she has a bad heart, we’re of course concerned that this quirky film may have a grim punch line. The obvious analogy is that Carrie is struggling against the turning of the world, trying to recapture a past and a youth that is gone forever.

The pleasant surprise is that although the journey has its problems, Carrie has a splendid time of it all. She meets the young Thelma, a worried wife separated from her husband, presumably a soldier in Korea. The Thelma sympathizes with Carrie’s escape plan; when they talk they discover that they have a lot in common. There are some beautifully-acted passages in which Ms. Page expresses the old lady’s confusion over life issues — the fact that she never really loved her husband, the truth of the love relationship she never had. As with many Horton Foote stories, uncommon kindness is the order of the day. A local sheriff shows up with instructions to hold Mrs. Watts for pickup by her worried son and irate daughter-in-law. Carrie almost sobs; she’s twelve miles short of ‘home.’ To our delight the sheriff doesn’t do his obvious duty — he doesn’t dismiss Carrie’s ‘silly’ personal issues.

Doom hangs over more than a few Horton Foote stories, but The Trip to Bountiful turns out to be about healing, acceptance and the hard work of making family peace under trying circumstances. Carrie almost wishes she could just die so as not to have to leave Bountiful again. Ludie says he doesn’t even want to look inside the house, which is as healthy an attitude as any — Ludie cannot see that anything positive can come of renewing old memories: the past is the past and cannot be re-lived. The memories are all Carrie really has. Jessie Mae still has her personality issues. Her personality may not show it very often, but she’s honestly concerned for Carrie too.

The Trip to Bountiful is handsomely shot and has the rich period feel and short-story atmosphere we associate with the better Horton Foote adaptations. Director Masterson’s fluid camera makes us feel that life is going on outside the camera’s range; we never get the idea that this is just a stage play with scenery tacked-on. The giant interstate busses that Carrie rides on immediately shout, ‘pre-1960.’ We feel Carrie’s delight as she leans out the window, soaking up the scenery as she’s transported to her desired destination.

The house in Bountiful isn’t forced to represent anything more than what it is — an abandoned farm in a depressed area that looks like a perfect place for a picnic. It’s neither a lost ideal, like Sterling Hayden’s horse ranch in The Asphalt Jungle, nor an empty shell like the haunted, damned town of Lassoo in Man of the West. No accusing voices shout at Carrie, “You’ve outlived your kind and you’ve outlived your time,”  But we know that’s just how she feels.

Geraldine Page’s Carrie is luminous, adorable, but she doesn’t beg for appreciation. Carrie isn’t senile by any measure. We enjoy her little-girl smiles of devious delight, when she hides her pension check from Jessie Mae, and when her escape plan seems to be working. Ms. Page surely earned her Oscar; four years later Jessica Tandy would also win as Best Actress in a play adaptation about another Southern woman, Driving Miss Daisy.

Director Masterson’s spouse Carlin Glynn makes a fascinating Jessie Mae. She’s a personality type easily recognizable by all: vain, dull and a real harpy when she gets into an abusive mood. John Heard’s Ludie is a saint, exceedingly patient and persevering. Some reviewers complained that Ludie is too passive, even cowardly; perhaps they couldn’t shake off Heard’s earlier triumph as the caustic, erratic Alexander Cutter. Rebecca De Mornay lends a note of grace and kindness right when the story needs it. The world has its share of gentle sweethearts like Thelma; why do her qualities now show up only in stories of victimization? Richard Bradford’s thoughtful sheriff is a genuine surprise. As with Heard’s Ludie, the sheriff contrasts strongly with most of Bradford’s earlier film roles — he’s nothing like the drunken womanizer Bradford played in the unrelentingly downbeat Foote adaptation of twenty years previous, The Chase.

The KL Studio Classics Blu-ray of The Trip to Bountiful is a gloriously pretty transfer of this calm and sane crowd-pleaser of the 1980s, the kind of show I had to be dragged to, and then enjoyed more than whatever forgotten film I wanted to see. The widescreen framing enhances director Masterson’s fine control over the material, which begins in the claustrophobic interior of the Watts apartment and opens up wider when Carrie embarks on her journey.

Kino includes a trailer and retains the excellent making-of docu from the first DVD release in 2005. It covers the history of the play as well as the movie. Horton Foote and Carlin Glynn are among the interviewees, and we’re pleased to see the author’s actress daughter Hallie Foote (Courtship) give her views as well.