Toot Toot!  The Little Engine that Could becomes a tale of the little town that could, when their tiny rail service is discontinued. A crackerjack cast of Ealing regulars — Stanley Holloway, Naunton Wayne, John Gregson — band together to take over the little spur line and keep it running. We get to see a vintage locomotive from the early 1800s in action, but the appeal isn’t limited to lovers of trains — Ealing’s knack for inspired, understated comedy is all over this show. Plus, it’s the company’s first feature in Technicolor, and is beautifully remastered. 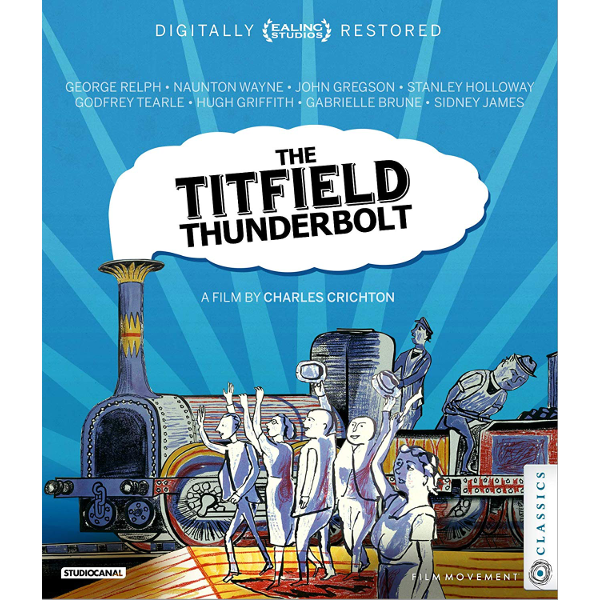 There’s an old-fashioned image of ‘Englishness’ that’s quite nostalgic in times of stress — civilized values, polite people, and a sense of fair play that extends to all but the most black-hearted knaves. There’s also a stereotyped sense of English eccentricity that rarely gets its due — old movies frequently make fun of a nutty butterfly collector, or a country parson enthused about postage stamps. Ealing Studios often celebrated these qualities, even in their more satirical comedies, as if ‘true’ Englishness requires a touch of whimsical absurdity. At least, that’s the observation of a totally inexpert Yank. 1953’s The Titfield Thunderbolt is even more dedicated to a positive image of Englishness than the company’s celebrated Passport to Pimlico. Both films address their comic situations from such a ‘local interest’ viewpoint that exporters may have had trouble selling them abroad. Pimlico is about the pluck and spirit of city folk, and the inhabitants of Titfield are just as adorable in their country-fied ways. Frankly, ANY mild comedy that shows civilization functioning on the human level sounds great right now, when our collective destiny hangs on daily Twitter posts. The strife and struggle on view makes the little hamlet of Titfield seem like heaven.

With no big stars, the show instead relies on its inspired story and a solid ensemble cast. Only in England could an actor like George Relph get high billing in a movie filmed in expensive Technicolor. Filmed in a merciful warm and dry summer in beautiful Somerset, Titfield was made by Ealing’s ‘A’ team: director Charles Crichton (The Lavender Hill Mob), writer by T.E.B. Clarke (Sons and Lovers) and cameraman Douglas Slocombe (Circus of Horrors) taking on the challenge of the 3-strip Technicolor camera. This was Ealing’s first Technicolor production. I believe that a line of dialogue mentions continued postwar rationing, which underscores the production’s sense of optimism — the underlying message is that the English spirit can overcome anything. Titfield is a tiny community about 30 minutes from a larger town, and the citizens rely on public transport. When the National Railways suddenly announce that they’re discontinuing service, the farming Squire Gordon (John Gregson of The Battle of the River Plate), the churchman Weech (George Relph of Ben-Hur) and a local swell Valentine (Stanley Holloway of My Fair Lady) band together with help from accountant Blakeworth (Naunton Wayne of Night Train to Munich) to petition the authorities to continue the line privately, to preserve their township as it is. Granted a thirty-day trial period, the entire community pitches in to spruce up the train and the little station. Weech is a confirmed train nut, and vies with retired engine driver Dan (Hugh Griffith of Gone to Earth) to pilot the old steamer. The wealthy, carefree Valentine lives to drink; Gordon gets him to bankroll the privatization effort by promising him that the train’s one passenger car will have an on-board bar. Old Dan won’t change his ways — he interrupts the trips to check his poaching traps, and shoot game birds.

Trouble comes from the greedy Alec Pearce and his sidekick Vernon Crump (Ewan Roberts of The Day of the Triffids & Jack MacGowran of The Fearless Vampire Killers). The pair have bought a bus and begin sabotaging the new ‘semi-amateur’ rail effort to ensure their success. They go to extreme lengths to put the train out of action before the official National Railways assessment day. The Titfield Thunderbolt will delight railroad fans, who are still numerous and just as rabid as ever about their pursuit — enthusiasts have located every actual bridge and crossway seen on the ‘fictional’ line between Titfield and Mallingford. Writer Clarke has happily worked things out so that almost all of the picture takes place on or near the rails. Everything would go swimmingly if not for the underhanded Pearce and Crump, who stall a truck at a crossing, bribe steam-tractor operator Hawkins (Sidney James of most everything) to do battle with the modest Titfield steam engine, and drain an essential water tank. The rival bus operators do manage to put the train out of commission on the night before the ‘amateur’ line’s fitness test, but the resourceful locals throw together two alternatives at the last moment. The drunken Dan and Valentine steal an engine and try to take it cross-country, a crazy effort that lands them in jail. The train fanatic Weech gets his group together to ‘borrow’ an ancient 1800s locomotive from a museum. Come the dawn, the preposterously jerry-rigged engine and coach are ready to roll.

The fun is of course in the highly amusing, inadvertently witty characters. Stanley Holloway is against the project until he realizes that, as an owner, he’ll be able to ride and get plastered at the same time. Naunton Wayne gets cold feet about the idea’s feasibility, yet is the one to risk his neck when the train is stolen, just out of common English decency. Pastor Weech panics when he thinks his superiors will catch him tending the train, but an unannounced visitor turns out to be another Bishop (Godfrey Tearle of Hitchcock’s The 39 Steps) who’s even more of a train fanatic, and who volunteers to stoke the furnace. It’s all very much an ensemble effort. The amusing actors are all cast to type, such as tiny Edie Martin as a villager who joins the others to make the Thunderbolt a success. When a man stands up to protest in a public meeting, we immediately recognize Reginald Beckwith, from the later Night of the Demon. Favorite face Jack MacGowran plays yet another weasel character, as he did in John Ford’s The Quiet Man — can U.K. viewers hear anything Irish in his accent?

When the bus conspirators are seen plotting their next sabotage mission, writer Clarke compares them with the corny villains in a western being viewed on a TV. Needing pots and pans to carry water to the train, the cooperative passengers swipe a baby’s bathtub, a shot that’s similar to a funny scene in Ealing’s 1949 Whisky Galore!   All the trains are amusing but the final antique model is a charmer — it appears to be in actual operation. The show apparently registered some social comment for Brits, something about the government and its centralized social reorganization interfering with the established calm of rural living. The show makes it look as if England can stay small and quaint and twee forever — but in the nicest possible way. The clear skies, bright attitudes and constant humor raise Titfield to a high level of fun. Film Movement Classics’ Blu-ray of The Titfield Thunderbolt is bright and sharp and nigh flawless. The Technicolor is splendid throughout; even the many traveling-matte shots showing characters on the moving trains look splendid — much better than the random images I’ve scavenged from the web. Cameraman Slocombe worked out a day-for-night timing formula that’s pleasing to the eye. We find out in an extra that he put an extra-bright light in the engine, so the day-for-night trick would work.

The show has no English subs, as was also the case with Passport to Pimlico. That locks out hearing-impaired viewers, but on this film, those of us that simply have trouble with English accents won’t be bothered — the dialogue is all quite intelligible.

It looks like the extras were created for a 2013 release in Region B. They come down to several featurettes, the longest being eleven minutes. There’s a making-of featurette and a historical piece on the vintage locomotive used in the film — it’s called ‘The Lion Locomotive.’ The director and the cameraman share an audio interview. The best piece gathers Douglas Slocombe’s home movies from the set, which show the Technicolor camera plus many of the actors, crew and various setups, even the setup for the special effects crash with a miniature train. It’s from a 16mm original and has been slightly stretched to fill the widescreen frame — perfect circles register as horizontal ovals. Behind the footage, we hear more audio explanations from Slocombe.