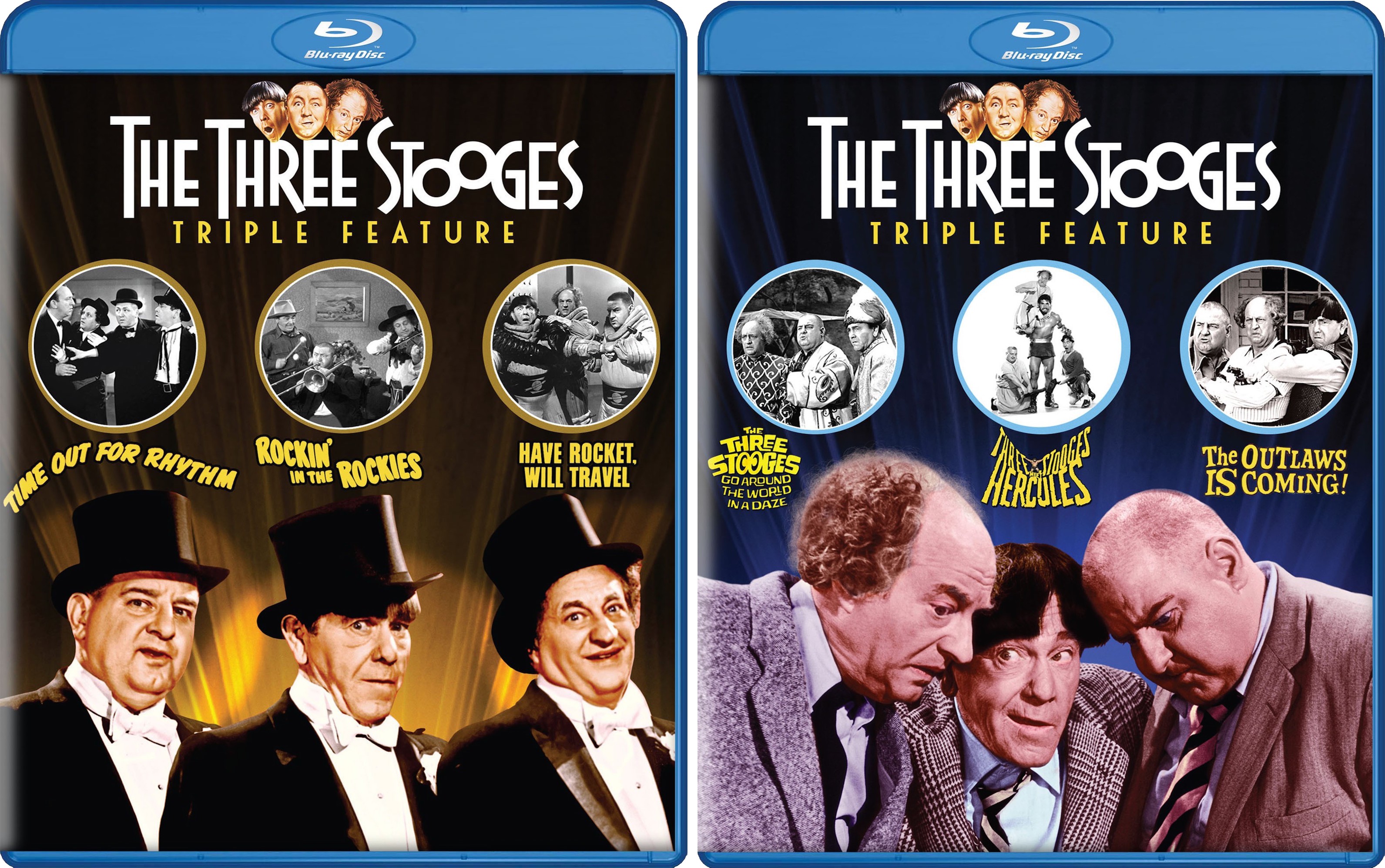 A frenetic mix of baggy-pants vaudeville and the Spanish Inquisition, the eye-poking exploits of The Three Stooges have appalled faint-hearted sophisticates and overprotective mothers for close to a century. 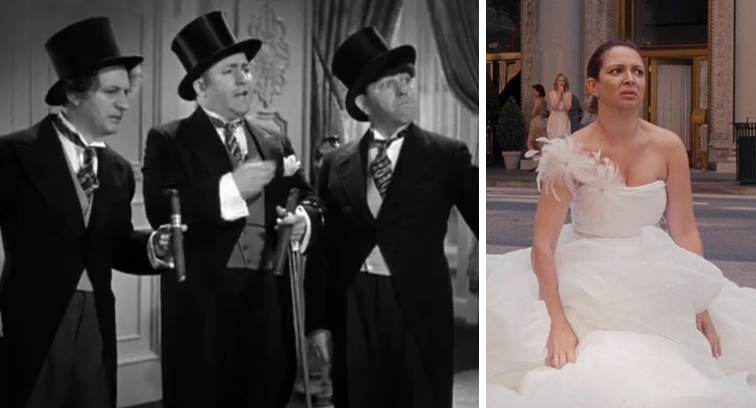 The team’s lowdown influence still lingers – not in the brutal roughhousing demonstrated by the lads in their most frantic moments but in their low class assault on upper class sensibilities – from the semen-sculpted hair-do of the Farrelly Brothers’s There’s Something About Mary to Johnny Knoxville’s Jackass to the mortifying contagion of diarrhea suffered by Paul Feig’s Bridesmaids, the Stooge abides.

And then there’s the Farrelly’s ode to brainlessness, 1994’s Dumb and Dumber – which paved the way for their parallel universe bio-pic, The Three Stooges. Most of the Stooge’s simmering anger was siphoned off in that 2012 charmer, casting the overgrown delinquents as sweet-souled, if easily perturbed, misfits. When the genuine article first set foot on stage in 1922, they were anything but.

Proud that the act “went over big in prisons and reform schools”, Moe Howard, née Moses Horowitz, was the team’s primary aggressor – while other performers held audiences in a vise-like grip with merely the arch of an eyebrow, Moe used an actual vise.

Larry Fine, born Louis Feinberg, was the most sleepily complaisant of the group, a man who found his calling in Lon Chaney’s He Who Gets Slapped – it was this frizzy-haired schmo who suffered most from Moe’s creative use of woodworking tools including pliers, power drills and, memorably, the handsaw raked over poor Larry’s shiny noggin in moments of duress.

Curly Howard was the wild card in a deck of jokers, a bug-eyed baldie of pure lizard-brained appetites, a cognitively challenged imbecile who communicated with high pitched outbursts and alarming barking noises. Naturally it’s his character that personified the primal appeal of The Three Stooges. 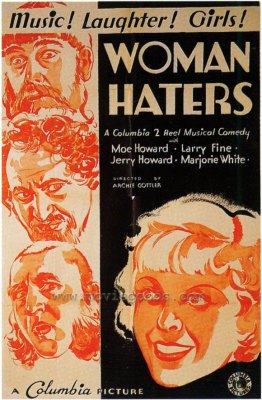 In 1934 Moe, Larry and Curly broke with Healy to star in Woman Haters, the first of over 190 two-reel shorts for Columbia. After Curly fell ill in 1946, his spot was filled by a parade of wannabe dim bulbs including Shemp, mewling man-child Joe Besser and “Curly Joe” DeRita, a potato-shaped burlesque performer who arrived on the scene in 1958.

The Stooges’s roller-coaster career ascended in the forties due to those Columbia shorts, endured a precipitous drop after Curly’s death but had a storybook resurgence when those same two-reelers were released to TV spawning X number of kiddie shows and new opportunites for kiddie show hosts. The boys’ new found popularity greased the wheels for a series of kid-friendly films that would put the cherry on top of a long and wonderfully disreputable career. 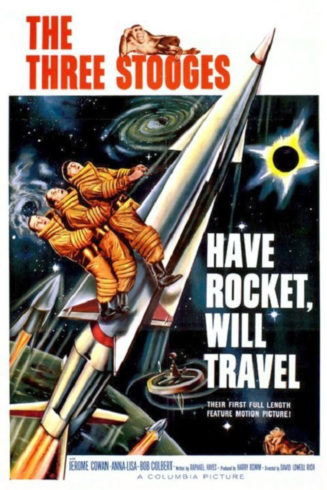 Mill Creek Entertainment has gathered up the lion’s share of those feature-length releases (plus two early forties romps with the original trio) on two Blu ray sets, The Three Stooges Collection – Volume One and Two.

1941’s Time Out for Rhythm and 1945’s Rockin’ in the Rockies were swing revues with the occasional outburst of knockdown comedy courtesy of the Stooges. The movies were not much to write home about, featuring fading stars like Rudy Vallee and colorless direction from journey men like Sidney Salkow (Twice-Told Tales) and Vernon Keays (assistant director on The Wolf Man).

The films were meant to be agreeable filler for a Saturday afternoon of high-pitched drama, up-to-the minute newsreels and a Tom and Jerry cartoon – and at that they succeeded. The movies just get by with the simple pleasures of  doll-faced Ann Miller’s eager-to-please tap dancing and bizarrely fascinating novelty acts like the Hoosier Hotshots. For what it’s worth, the Stooges come off as the most polished performers, reliably disrupting the sleep-inducing plot lines with concentrated shots of knock-about mayhem.

The movies that sprang out of the Stooges late 50’s television renaissance might as well have been TV shows themselves. Zeroing in on the trio’s after school audience, these cinematic babysitters were built for maximum adolescent appeal with monsters, martians and cowboys boosting the plot lines.

Have Rocket, Will Travel set the template as the boys engage in satirical send-ups of kid-friendly movie genres – in this 1959 sci-fi spoof the boys are inadvertently shot into space (shades of Abbott and Costello go to Mars) and return to earth as national heroes  feted by the tuxedo crowd. Pie-throwing ensues. 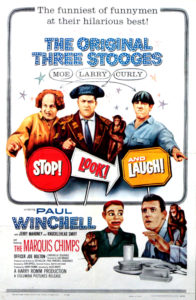 Made for 380,000, Have Rocket brought in over 2 million at the box office inspiring Harry Romm, the film’s producer, to go rogue – in 1960 he hired ventriloquist Paul Winchell to star in Stop, Look and Laugh, a mishmash of the Stooges two-reelers tied together by Winchell’s snarky back-and-forth with a literal dummy, Jerry Mahoney. The Stooges responded by suing Romm.

The boys won twice – first by collecting from Romm and second by investing their reward in a new company, Normandy Productions, a savvy business move that would open the door to the most successful years of their career. The mastermind behind all this was Moe’s son-in-law, Norman Mauer, a comic book artist who dabbled in sideshow gimmickry like 3D comics and the outré solarization process known as Cinemagic for 1960’s outer-space quickie, The Angry Red Planet. 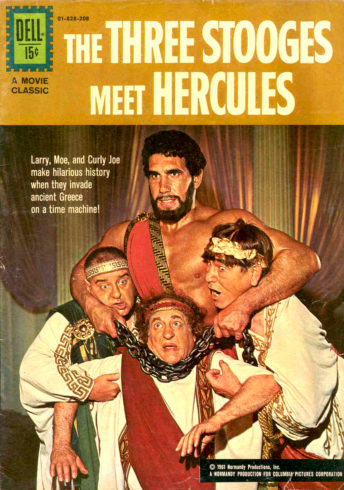 Maurer paired the boys with Ed Bernds, a longtime associate who was behind the camera for some of the more memorable Stooges two-reelers including 1945’s Micro-Phonies and an old hand at keeping the front office happy while propagating the bottom half of double bills with crowd-pleasing time-killers like the Blondie Hits the Jackpot and The Bowery Boys Meet the Monsters.

A mildly bawdy burlesque mining the same territory as A Funny Thing Happened on the Way to the Forum, Meet Hercules was a time-traveling farce littered with mythological monsters, Ben-Hur gags and a can’t-miss comic book plot from Maurer – it hit every sweet spot known to a fifth-grader and led to a “get ‘em while they’re hot” turnaround later that year for The Three Stooges in Orbit (a film sadly absent in this collection).

Orbit follows an ancient horror-comedy blueprint first popularized in 1920’s Haunted Spooks – the trio, suddenly in need of shelter, take up in a spooky mansion equipped with a mad scientist, hidden passageways and bonafide outer space aliens. The film is notable for Emile Sitka’s appearance in a prime supporting role. An addlepated dillettante and perfect foil for unsuspecting Stooges, Sitka had appeared so frequently with the trio that he was dubbed “The Fourth Stooge”. “Hold hands, you lovebirds!”, Sitka’s immortal pronouncement from 1947’s Brideless Groom, appears on his gravestone.

The breakneck cultural shifts of the 60’s waited for no one, not even the Stooges. Though 1962 proved to be their zenith, the air was going out of the balloon fast. 1963’s The Three Stooges Go Around the World in a Daze – not so much a satire of Jules Verne but a low-budget take on Mike Todd’s glorified roadshow starring David Niven – and 1965’s The Outlaws Is Coming!, a cowboy romp featuring local kid show hosts as the villains – brought in only half the box office of their predecessors. 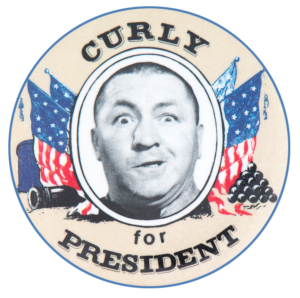 Not to be deterred they headed back to television with a cartoon show, 1965’s The New Three Stooges, a syndicated series of underwhelming success. Even after Moe and Larry’s passing the boys were showing up on Saturday morning in fare like  1972’s The New Scooby-Doo Movies – though their most peculiar incarnation might have been 1977’s The Robonic Stooges, where they were portrayed as bumbling bionic superheroes.

In the early eighties enthusiastic fans began a campaign to put a Stooge in the White House – be careful what you wish for – the Stooge abides.

Stooge-ophiles should be pleased with Mill Creek’s efforts on these two budget-friendly discs. The transfers are very fine, particularly the rich black and white palettes of the two 40’s era productions (courtesy of cinematographers Glen Gano and in particular Franz Planer, DP for such epochal Hollywood product like 20,000 Leagues Under the Sea, King of Kings and Breakfast at Tiffany’s.)

The films from the 60’s suffer from that era’s propensity to light comedies like they were set in operating theaters with nary a shadow to be found. Nevertheless the prints are in excellent condition and nicely detailed.