This moody, unsettling whodunnit benefits from sensitive cinematography, fine direction and a perfectly-cast group of players. Stephen Boyd gets a worthwhile starring role, backed by some good names and a nice debut from Judi Dench. What I don’t understand is why Pamela Franklin, possibly the most talented and versatile young English player ever, didn’t become a major star. She’s more than half the picture here. 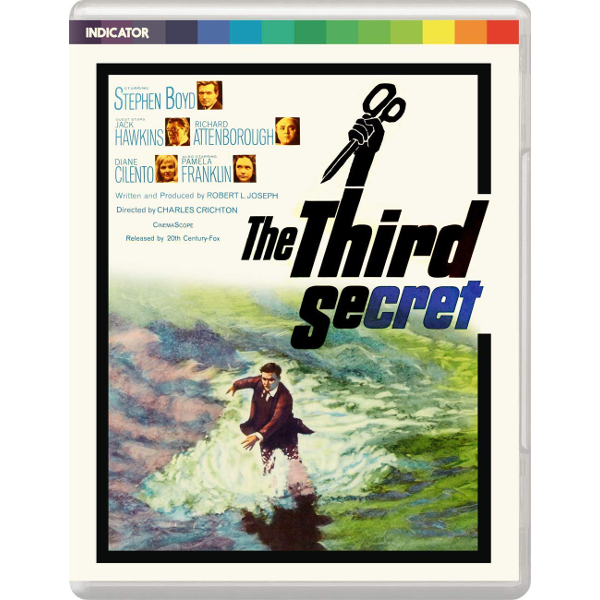 Trying to keep up a production schedule during the cash-flow crisis of Cleopatra, 20th-Fox green-lit a number of pictures to be made in England. The murder thriller The Third Secret is produced and written by Robert L. Joseph, a first-time producer whose experience was mostly in the theater; his strange and somewhat pretentious screenplay attempts an art-film home run. But the top talent Joseph enlisted for his film makes a success of almost all of its dramatic and thematic stretches. The offbeat mystery is not a startling or revolutionary artistic statement like Laughton’s Night of the Hunter or Hitchcock’s Psycho, but it does work, and it’s plenty suspenseful.

Joseph and his crack director Charles Crichton deftly overcome what are usually serious filmic handicaps: a story that depends on formal psychology, an episodic structure with isolated characters, and a starting-point premise — spelled out in the advertising — that suggests a tired cliché: a person investigates a murder that he could have himself committed.

Trusted London psychiatrist Dr. Leo Whitsett (Peter Copley) death by gunshot wound is quickly wrapped up as a suicide. Despite the evidence, two people don’t accept that conclusion. American Alex Stedman, a popular UK TV commentator, was one of Whitsett’s patients in analysis. Alex’s recovery was partly based on his faith in Whitsett’s stable personality, so he experiences episodes of anxiety and anger. Alex meets and befriends’ Whitsett’s 14 year-old daughter Catherine (Pamela Franklin), who is now living with her aunt and uncle. The suicide verdict has deprived Cathy of her father’s insurance money. Cathy is obsessed with her father and their beloved Thames-side row house that will now be sold. She convinces Alex that her father must have been killed by one of his patients. Alex uses his celebrity to inquire with Scotland Yard and the prestigious clinic that Dr. Whitsett helped found. Nobody will help him access a patient list, but the precocious Cathy reveals that she can — she remembers everything about her father. Alex uses his wiles as an investigative journalist to approach the three people on the list, all of whom have reasons to keep their psychoanalysis a secret: the disturbed art-seller Alfred Price-Gorham (Richard Attenborough); Frederick Belline, a judge with a past indiscretion to hide (Jack Hawkins); and a lonely clerk-typist Anne Tanner (Diane Cilento) who has difficulty with relationships. Alex wants to relieve his own anxieties and those of Cathy, but his quest is not pleasant: he cruelly baits the judge, and takes terrible advantage of the vulnerable Anne Tanner.

The Third Secret offers few ‘normal’ characters for viewer identification. Potential villain Alex Stedman is just as neurotic as the people he interviews/victimizes. We learn that his personal/emotional issues stem from the death of a child. Alex’s disturbance is not subtle: he destroys his apartment in a fit of frustration, and uses a cruel trick to shake up one suspect. Alex’s unchaperoned relationship with Cathy arouses suspicions that their teasing friendship will cross the line into a forbidden relationship. He becomes violent when Cathy’s uncle (Alan Webb) voices the accusation directly. We worry for young Cathy, who seems too wrapped up in her obsessive quest to rehabilitate her father’s reputation and regain a lost idyllic riverside home.

The most disturbing part of the show is Alex’s relationship with Diane Cilento’s vulnerable Anne Tanner. We think that he’s sincerely falling in love, only for him to reveal his deception, throw her into a psychic tailspin, and then just walk out on her. It’s a crime almost as bad at the initial murder, and yet the film voices no opinion about it.

Joseph’s high-toned screenplay voices opinions on almost everything else. At his job at the BBC, Alex’s popularity comes from being a pessimistic voice expressing troubled, grave doubts about institutions, society, and what-have-you. It is not explained why the English would want an American spokesman for social failures. At least three times, dialogue makes a special point of slamming the United States. Steadman acts as if most problems originate in America. Later, even Cathy says she’s surprised that some Yankee psychiatrist gave her father an award, because Americans are so ‘grumpy.’ Steadman is a ‘guilty expatriate’ American such as that depicted in Joseph Losey’s These Are the Damned. Nothing explicit needs to be spelled out, as the mere presence of a guilty American ‘makes its own statement.’ Is this vein of comment legit character depth, or was the author just after a trendy sense of disenchantment?

Joseph doesn’t explain much else, either. He avoids the dumb whodunnit formula of wheeling out trite motivations for every character, and substitutes the device of creating more unexplained mysteries. Attenborough’s affected art seller comes from a long line of similar aesthetes, like Percy Esmé’s antiques vendor in the classic Dead of Night. He’s a walking swamp of neurotic complexes, perhaps stemming from frustrated artistic ambitions of his own. We’re told that more material with his assistant Miss Humphries (Judi Dench, in her film debut) may have been cut out. In this year Jack Hawkins was still using his own voice. His decent judge is devastated to learn that Alex knows about a scandal in his past that might destroy his life, But we never find out what the scandal was. We given a clue or two about Cilento’s Anne, who doesn’t know how to assert herself in conversations, and has difficulty being touched. Perhaps she’s a victim of rape… ?

The screenplay is certainly fond of literary and verbal clues. Cathy is obsessed with the idea of home, Anne has the same thought on her mind and Alex is of course an uprooted American. Cathy shared Shakespeare-quote games with her father, and now with Alex; they’re expressed in chalk text on the seawall outside her beloved childhood home. The big deep-think message is a litany about secrets:

Director Crichton makes excellent use of great B&W ‘scope cinematography by Douglas Slocombe — the riverside is dank, muddy and moody. Interiors soon become oppressive through the use of interesting angles and shadows that carefully stay just shy of mysterioso clichés. Alex does experience a stylized, expressionistic dream sequence (after having sex!) that looks sensational but is perhaps a bit too literal — at least it contains no foolish spot-on visual clues, none of the alligator purses or patterns of lines, etc., that gummed up Hitchcock’s weak psychological thrillers.

Psychiatrist Paul Rogers does unload a heap of psychological exposition in an early scene, when Alex is asking if any of Whitsett’s patients might have been homicidal. But The Third Secret doesn’t take a mechanical attitude to psychology, or make it easy for us to separate the ‘sane’ characters from potential Moon Loonies. This is commendable in itself. Human behavior is never that pat or predictable in real life, but dramas keep looking for ways to codify and quantify such intangibles — just look at the insulting ‘psychology,’ not to mention the outright lawbreaking and privacy invasions, of the supposedly sophisticated heroes on TV’s Bull. (Sorry for that detour.)

The acting is basically fine throughout. Stephen Boyd does extremely well with a difficult and somewhat inconsistent character. Diane Cilento is touching and believable, even in the slightly awkward pickup scene in a park. Jack Hawkins is convincingly shattered by Alex’s dirty trick. Richard Attenborough is good but looks a little odd jammed into a part-bald makeup — he seems to be trying too hard.

The sensation of the movie is Pamela Franklin, who I think was cheated out of proper recognition of her talent. Her performance isn’t ‘good for a juvenile,’ it’s the best acting in the movie and remarkable on all levels. It’s depressing to see how Franklin was given typical kid roles opposite horses, lions and even Flipper, although I would like to see Disney’s seemingly suppressed A Tiger Walks again. She ended up in too many horror pictures. It’s terrible, hearing in a commentary on her triumph The Prime of Miss Jean Brodie, that she was treated on the set as a potential problem, told to do her job and not ask questions … when she’s the equal of Maggie Smith throughout the picture.

Contributing precise bits of character support are the expressive Freda Jackson, Charles Lloyd Pack, Rachel Kempson, Nigel Davenport, and Barbara Hicks, who was the weird ‘Mrs. Alma Terrain’ in Terry Gilliam’s Brazil. Hicks’ Civil Servant is on screen only about ten seconds, but is given the film’s funniest line.

The Third Secret remains a little moody – creepy all the way to the finish, which happily is quite satisfying. And if you can’t tell that I’ve had a crush on Pamela Franklin since seeing her in A Tiger Walks, I’m not doing a good enough job here.

Powerhouse Indicator’s Region B Blu-ray of The Third Secret is an excellent transfer of a show that Fox has released here only on DVD. The B&W cinematography comes across beautifully — I don’t think that an NTSC DVD would look anywhere near as rich. Composer Richard Arnell’s music score immediately sets the somber mood, and steers clear of too much expression during the dramatic highlights. His work is separated out on an isolated Music and effects track. Producer Anthony Nield pulls together some excellent added value material, keeping PH’s extras at the Criterion level of key-source analysis. I really enjoyed Neil Sinyard’s longer film analysis — he uncovers riches in the show that aren’t immediately apparent. Robert Murphy’s essay appears in an insert booklet illustrated with many color stills for this B&W show. Murphy takes us through the politics of the production — a returning Darryl Zanuck didn’t like it, and had an entire sequence about a fourth ‘patient’ removed. She was played by Patricia Neal. →  Her absence is missed only in that it requires that another character take her place in an important plot development. Both Murphy and Sinyard remark on the clear-cut separation between the episodes with Whitsett’s patients.

Dean Brandum and Eloise Ross provide the audio commentary, explaining the background of the interesting producer-writer. Continuing with PH’s frequent audio interviews, we’re given British Entertainment History Project interviews with Charles Crichton and Douglas Slocombe. Both men are described in short video interviews with crew members, who add personal memory-anecdotes from the set. Crichton’s son David speaks about his father as well.