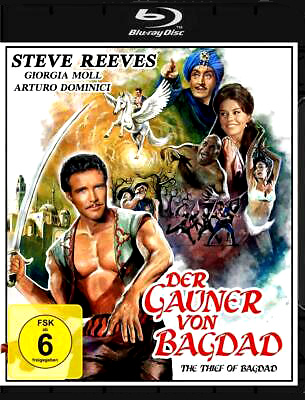 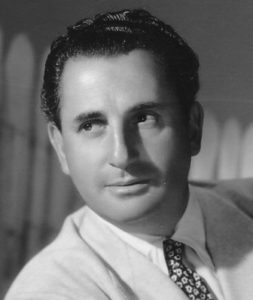 When he shuffled off this mortal coil in 1995, Arthur Lubin’s New York Times obituary was titled “Arthur Lubin, 96, Director Of ‘Mr. Ed’ TV Series, Dies.” It’s doubtful the prolific Lubin would have complained about that particular credit headlining his accomplishments; the man who directed Karloff and Lugosi, jumpstarted Abbott and Costello’s film career and gave Clint Eastwood his first break, also had a thing for talking animals. In 1950 he bought the rights to a book about a talking mule and began a series of hit comedies starring a four-legged chatterbox named Francis and his two-legged pal played by Donald O’Connor.

Industrious to a fault, Lubin’s career was spent crisscrossing from theater to film to television and back again yet almost every project seemed to prevail (“I made 69 films of which eight have been miserable flops.”) In the 40’s and 50’s Lubin added exotic swashbucklers like Ali Baba and the Forty Thieves and Star of India to his resume so he was up to speed when producer Joseph Levine called him to Tunisia for a remake of The Thief of Baghdad. 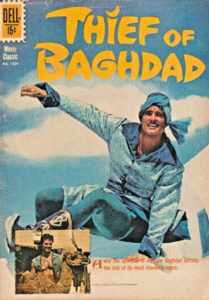 Derived from a collection of Middle Eastern folktales called One Thousand and One Nights, the best known adaptations of this popular fantasy starred Douglas Fairbanks in 1924 and Sabu in 1940 – each was a studio extravaganza  with lavish sets and state of the art special effects. Levine expected – and got – a cost conscious remake with an emphasis on bare-chested brawling rather than high-flying fantasy. The thief was called Ahmed in 1924 and Abu in 1940 – in Levine’s 1961 version he’s called Karim and he wages a light-hearted rebellion against a conniving Grand Vizier who controls the Sultan, a motley fool who has trouble remembering his own name.

The thin plot thickens when the Sultan’s daughter Amina, played by Georgia Moll, falls ill. Only the Blue Rose – a heaven-sent flower that hides behind a mystical portal that “can be found where it is not” – will cure her. And so Karim leads an army of blue-clad Galahads into the wasteland to face a supernatural parade of gap-toothed ogres, walking trees and wicked witches before reaching the cloud-bound oasis where the Blue Rose waits. 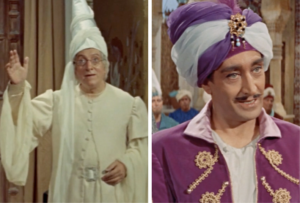 The summers in Tunis, just six hours from “the gateway to the Sahara”, are beastly hot – 100 degrees on a good day.  Lubin and crew had to rise earlier than usual to beat the heat but the sunny results show no signs of strain. Carlo Rustichelli composed an angelic score that sounds more like a lullaby than a thrill ride. Tonino Delli Colli, cinematographer for Once Upon a Time in the West, filled the CinemaScope frame with the bluest of blue skies and sun-baked castles designed by Flavio Mogherini (1954’s Ulysses and Pasolini’s Accattone.)

The supporting cast was crowded with memorable European stars – a turbaned Georges Chamarat (Diabolique) flits in and out as the phantasmagorical magician who aides Karim on his quest and Arturo Dominici is Karim’s back-stabbing rival, Prince Osman. Dominici played Barbara Steele’s demonic sidekick in Bava’s Black Sunday and according to Tim Lucas in All the Colors of the Dark, his expansive biography of the director, Bava devised some of the special effects for Thief (he’s listed as Thomas Howard in the credits). It seemed Lubin and Levine had everything they needed for another winning effort.

But there was a muscle bound wrench in the works. 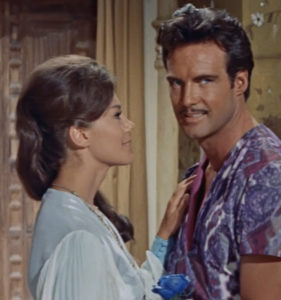 At center stage of Lubin’s sunny-side-up adventure was Steve Reeves, a former Mr. Universe with the physique of a Grecian statue and an expression just as animated. From 1958’s Hercules to 1963’s Sandokan the Great, Reeves appeared more disengaged from his cast mates than most unskilled actors in part because he was dubbed for much of his career. The result was a Disney animatronic with better hair. In Thief Reeves’ voice was provided by the storied George Gonneau; he had a long career at New York’s Titra Sound Studios, dubbing Marcello Mastroianni in 8 1/2 and narrating the American version of Black Sunday. His inimitable line readings were suitable for most romantic leads but distinctly at odds with Reeves’ barrel-chested posing and vacant gaze. Reeves had the last laugh, though – in 1967 he was the highest paid actor in Europe. 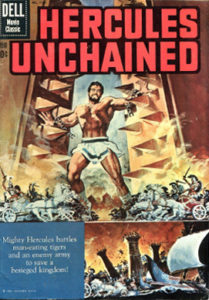 In the late 50’s and early 60’s Reeves gained fame as the poster boy for an unexpected fad; a series of movies known as Peplum – the Greek word for tunic. A blend of Greek mythology and Championship Wrestling, the majority of these sweaty epics were produced by a thriving Italian film industry and emulated adventure films with a Biblical slant like Spartacus and David and Goliath. A multitude of studios including Nike Cinematografica, Romana Films and Galatea Film manufactured them like sausage.

Many of the films starred bodybuilders turned actors (ofttimes they didn’t make the turn) with names like Alan Steel and Ed Fury. Gordon Scott (né Gordon Werschkul), whose Tarzan films are among the finest produced in that series, traveled to Italy to play, among others, Samson, Julius Caesar, Hercules and the title role in Goliath and the Vampires, an amusing monster mash directed by Sergio Corbucci. Even Sergio Leone and Mario Bava rode the wave with The Colossus of Rhodes and Hercules in the Haunted World. But it was Reeves who set the gold standard for such brawny thrills. By the time he starred in Thief he was as much a commodity as the sword and sandal films themselves – a money maker for the studios and a hero to children who happily crowded Saturday matinees to watch him heave one bad guy after another over his shoulder – but then weightlifting was his one true métier. 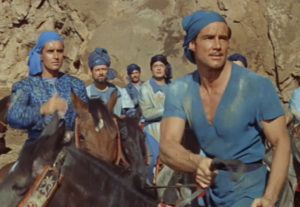 Levine had been banking on a repeat of his success with Hercules, a monster hit that landed in the number 20 slot in 1958’s box office chart, just under The Fly and 7th Voyage of Sinbad. Even with Reeves’ star power, The Thief of Baghdad wouldn’t crack the top 50.

As a lingering effect of its poor showing at the box office, this unassuming romper room fantasy has endured more than its fair share of neglect – including careless home video releases with panned, scanned and blurry imagery – which is why the announcement of a Blu ray release by a German company named Colosseo Film set off a small internet frenzy. 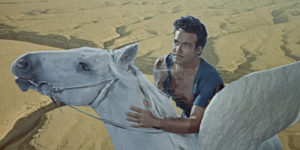 It turns out to be quite a nice presentation – the main source of happiness comes from the image itself – a boldly colored transfer finally framed in the correct 2.35:1 ratio. The print is occasionally soft but generally the image is quite pleasing. The disc also reinserts some cuts made to MGM’s original stateside release – nothing of import but always good to have a complete print – in those moments English subtitles automatically appear. Unfortunately the Blu ray is  UPDATE – the disc in fact All Region. The disc comes with a couple of modest extras, a short interview with Reeves’ stunt double Giovanni Cianfriglia – though unfortunately in Italian with German subtitles – and a gallery of promotional art for the film.