A superb thriller is now better than ever on 4K. We’ve always known why it rewards viewings: it’s both thrilling and funny. When Robert Shaw, Martin Balsam and Hector Elizondo hijack a subway train, Walter Matthau must scramble to collect a ransom while trying to figure out how they’ll make their escape. Peter Stone’s dialogue is delightful — the loud & mouthy ’70s New Yorkers are hilariously abrasive — and lovable. “Who wants to know?!!!” Includes a Blu-ray disc and a new commentary. 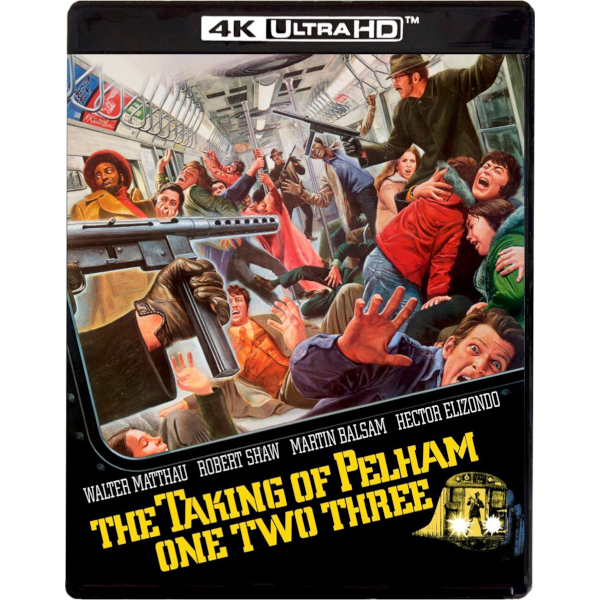 When this title was announced for 4K I thought, ‘Oh no I just reviewed a Blu-ray.’  Then I see that the review was eight years ago.  What’s up with that?  Am I going to bat my eyes twice and find out that I’m 99 years old?  Time doesn’t seem to operate the way it once did.

It’s a pleasure to dig back into The Taking of Pelham One Two Three 4K. Admirers of director Joseph Sargent responded to earlier reviews with praise. Yes, this show really stands out from the early ’70s crowd of gritty New York police movies: it tells a convincingly gritty story with an affectionate, satirical look at the city’s functional/dysfunctional core.

This reviewer was a film student in the early 1970s, and at the time wasn’t a fan of cop shows. I was then more interested in older movies than contemporary genre pictures — which in theaters tended to look very ugly, with grainy green prints. I theorized that the labs figured that grimy cop shows didn’t need to look pretty.

But Pelham was different — it wasn’t only about car crashes and gun violence. An odd ensemble of killers and crooks hijacks a subway car, a story situation that always felt credible. Manhattan spins into a maelstrom of confusion, from the Mayor’s mansion to a series of grimy underground transit monitoring stations. Dogged Transit Cop Walter Matthau tries to save lives, but New York throws one obstacle after another into his path: bureaucratic red tape, traffic gridlock and mayoral politics. What proves to be the greatest hurdle is the essence of the New Yorkers themselves: almost to a man they’re contentious, opinionated, and hot-tempered. Men with machine guns aren’t enough to keep irate subway riders or mad-as-hell schedulers from saying exactly what’s on their minds. The Taking of Pelham One Two Three isn’t as much about a crime as it is a portrait of a profane, beloved city.

“How the hell can you run a goddamn railroad without swearing?”

Four heavily-armed men using the code names Blue, Green, Grey and Brown (Robert Shaw, Martin Balsam, Hector Elizondo & Earl Hindman) seize a subway car loaded with passengers. They uncouple it from the rest of the train with the demand that one million dollars be delivered in just one hour, or the leader Mr. Blue will start executing hostages. Mr. Grey, an ex-Mafia psychopath, blasts down a railroad employee (Tom Pedi) who insists on approaching the stolen train car. Mr. Green (Martin Balsam), a subway motorman fired for corruption, prepares the cab for a quick getaway. Up top, Transit Lt. Zachary Garber (Walter Matthau) keeps a dialogue going with the hijackers as the Mayor (Lee Wallace) expedites a cash ransom from across town. Garber must also cope with visitors from the Japanese subway system and the stubborn interference of a colleague, subway routing master Correll (Dick O’Neill). As the deadline looms closer the ransom delivery is delayed. Garber begs the hijackers for more time. Little thought has been given to what should be an obvious question: just how are the robbers going to escape with their loot?

The Taking of Pelham One Two Three is a winner from the very first note of David Shire’s jazzy theme music. Handed an unbreakable scenario by author John Godey, ace screenwriter Peter Stone is able to stress a wide spectrum of reactions to the extortion plot unwinding beneath the streets of the city. Until the emergency is established, Lt. Garber’s wisecracking office mates are unimpressed by anything, including their bosses. Down in the bowels of the switching stations, old New York is represented by the colorful ‘character’ types Robert Weil and Tom Pedi, who conduct all business by shouting, preferably with insults.  ↓  Tom Pedi goes back to the classic days of film noir, with strong parts in The Naked City and especially Criss Cross, where his repeated reaction to good news was always a heavily-accented “That’s the ticket! That’s the ticket!”

“We’re going to let ’em keep the goddamn subway train. Hell, we’ve got plenty of them; we’ll never even miss it.”

The mayor is a whining, profane bundle of nerves. Saddled with the flu, he must be goaded and insulted into doing his duty by his patient wife (Doris Roberts) and his nervy assistant (Tony Roberts). The mayor needs to appear in public to show concern for the seventeen hostages, but he’s convinced that people will boo him: “They always do!”  The bitter chief dispatcher Correll works himself into a pissy mood that makes Archie Bunker look benign by comparison. Garber loses his patience when Correll’s outbursts become an obstruction, and a fistfight almost breaks out.

Meanwhile, the tension down in the subway is off the chart. The tunnels are lined with snipers itching to open fire; they’re so keyed up they might accidentally shoot each other. The thief-in-command Mr. Blue has worries of his own. Mr. Grey reveals himself to be a bloodthirsty loose cannon, shooting first and grinning with pride afterwards. The nervous Mr. Green can’t keep his mouth shut, and tells the captive conductor and motorman too much about the mission. Despite the gun barrels pointed at their noses, the hostages behave like genuine New Yorkers, sassing back at their captors and flying into multi-lingual panic. Mr. Blue’s secret escape plan sends them on a wild high-speed ride through the subway system that scares the pants off everybody. One hostage has a good idea of how to absorb the tension — she folds herself into a lotus position to meditate: “Ommmmm!”

“Why didn’t you go grab a goddamn airplane like everybody else?”

And there’s one more loose wrench in the machinery: Lt. Garber knows that one of the hijacked hostages is really an undercover Transit Cop . . . armed with only a small pistol, and waiting for an opportunity to act. It may even be a woman.

Walter Matthau and Robert Shaw are solid foes, Martin Balsam is great as a sniveling thief and Hector Elizondo appropriately reptilian as the sneering, trigger-happy Mr. Grey. The movie celebrates the anti-melting pot of Manhattan at a certain time in history, when the city’s fortunes were at low ebb and the credo on the streets was Every New Yorker for Himself. Yet there’s an admirable resilience in the rude resistance put up by these civilians — they’ve got grit … they’ve got moxie.

“Excuse me, do you people still execute in this state?”

There’s no downside to this original version of The Taking of Pelham One Two Three. It delights on all levels, from Walter Matthau’s gum-chewing effort to keep a lid on his nerves to the wonderfully profane colorful responses of 1001 New Yorkers. Irate citizens heckle the Mayor, while a police commander (Julius Harris) gets to snap out old-fashioned cop-show dialogue: “Get this thing turned around and burn rubber!” Although several innocents are wiped out the movie is not particularly bloodthirsty. The pacing is taut and the humor just keeps coming. All in all, this is an unappreciated modern classic.

The KL Studio Classics 4K Ultra HD + Blu-ray of The Taking of Pelham One Two Three 4K looks so good, it almost feels like a stylistic revision. Back in 1974 directors of photography like Vilmos Zsigmond and this film’s Owen Roizman developed a technique called flashing — pre-exposing raw camera negative to low levels of light to greatly enhance its effective sensitivity. This allows much of Pelham to obtain a workable image with very good depth of field in near-dark conditions. The image gains in grain and the color values can be thrown off, but the result is much like what we see a dark transit tunnel or the interior of a train traffic bullpen lit by fluorescent lights. The movie ends up with a very good docu-drama look.

The original prints I saw looked terrible — all greenish and exceptionally grainy. The first pan-scan 16mm TV we saw were pretty grim as well. So we were surprised when modern transfer and coloring tools had little problem optimizing the images. The film does have grain, but it’s no longer out of control. And the coloring of shots is now quite attractive. It doesn’t betray the film’s intentions, I don’t think. Just look at a YouTube trailer if you want to see how it used to look. The new 4K is touted as newly mastered in HDR/Dolby Vision from a 4K scan of the original camera negative. It just looks fabulous — all those images of downtown Manhattan traffic, etc. The tunnel scenes are more dynamic than ever.

Kino includes a new Blu-ray in the package. The one new extra is an enthusiastic audio commentary from Steve Mitchell and Nathaniel Thompson; it joins a good older track with Pat Healy and Jim Healy. The tracks are on both the 4K and the Blu-ray, but the older video extras are only on the Blu-ray disc.

The old-fashioned making-of original featurette gives us the ‘personal thoughts’ of Transit Cop Carmine Foresta, who acted as a tech advisor and plays a small role. The behind-the-scenes shots are very good. Foresta leveraged the opportunity well, gaining additional work in The Godfather Part II, Dog Day Afternoon and Prince of the City.

An interview piece with actor Hector Elizondo is a real treat. He comes off as a real sweetheart, talking about his career situation, his worship of director Joseph Sargent, and the seriousness with which he took on the role of the machine-gun toting Mr. Grey. Elizondo’s anecdotes about the cast are also worth hearing. The other two reviews are more limited in scope. David Shire discusses his score in enough detail to keep soundtrack fans happy. Editor Gerald Greenberg gets into some of the problems incurred getting the show into final shape. A still & ad art montage and a trailer are included, as is a ‘Trailers from Hell’ entry with commentary by director Josh Olson.

Nobody considered these cop shows to be Oscar material, even though The Taking of Pelham One Two Three is superior to most movies from 1974. I have a theory that the film’s exploitative poster kept some viewers away. With its sober tag line “We are going to kill one passenger a minute until New York City pays us one million dollars,” the cartoonish mess of gun barrels and screaming victims would look better advertising a movie called The Manhattan Machine Gun Massacre.