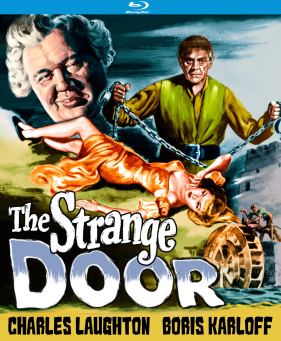 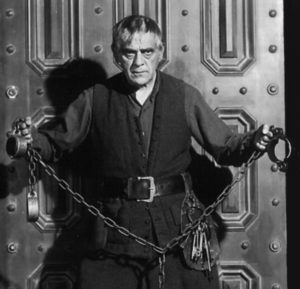 Charles Laughton is a vengeful aristocrat with a secret in the cellar and Boris Karloff is the family servant who holds the key to The Strange Door. Released in 1951, the Universal International period piece stars Laughton as Alain de Maletroit, a bitter reprobate who lures a fugitive into his castle with the promise of sanctuary in exchange for a wedding vow.

There’s a bright side to that peculiar overture – the mystery bride is de Maletroit’s niece, the prim but pliant Blanche played by the low key seductress Sally Forrest.

Laughton’s convoluted plan is a decades-long effort to corrupt Blanche and humiliate her father, Edmond, the man who stole Blanche’s mother from Laughton years before. The fugitive, Denis de Beaulieu, plots to free Blanche with the help of the enigmatic Voltan (Karloff) and uncover the mystery of the howling man in the basement. Got that? 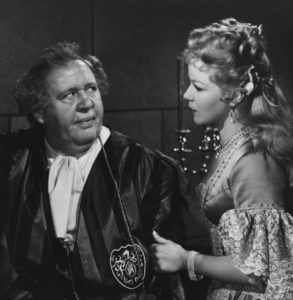 It’s hard to believe this gothic soap opera was in theaters the same year as A Streetcar Named Desire with Marlon Brando – a performer who exemplified the modern actor. On the other hand, maybe it’s not such a stretch – both Robert Stapley (as de Beaulieu) and Forrest’s characterizations have no more connection to 17th century France than Pee Wee Herman.

More suited to the era are the old pros above the title – though Laughton’s performance is a sit-com parody of his fabled turn as Henry VIII, brandishing turkey wings while burping his lines. It’s unclear if he’s trying to liven things up or is so disdainful of the project he’s pulling his own kind of Brando. 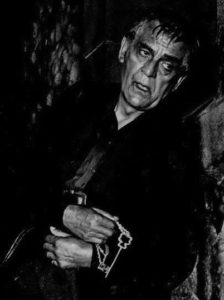 Karloff was at the point in his career when his name on the marquee meant more to studios than his actual presence in the picture – in The Strange Door he spends most of the running time lurking in secret passages and spying through keyholes. The actor’s sunken eyes and sagging profile are a haunting reminder of Bateman, the persecuted killer he played 16 years earlier in The Raven – but without the pathos.

The movie is enhanced by the presence of familiar Universal faces including the underrated Michael Pate (the conflicted vampire of Curse of the Undead) and Alan Napier (15 years before he butlered for Batman). Paul Cavanaugh – a man who knew his way around historical drama – plays the target of Laughton’s wrath, Edmond, a Monty Pythonesque cellar-dweller driven mad by his imprisonment – or was he?

Screenwriter Jerry Sackheim based his script on The Sire de Maletroit’s Door by Robert Louis Stevenson. A writer with a nose for both pulp fiction and fantasy, Sackheim furnished the story for the hard boiled heist flick Guns Girls and Gangsters and the script for Bert I. Gordon’s kindergarten romp The Boy and the Pirates. 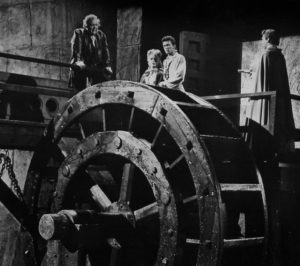 Sackheim struggles with the royal vernacular but spices things up with vague hints of incest and unspeakable sadism – an approach Laughton would surely have embraced in full if not for the Universal brass.

The film is indifferently directed by Joesph Pevney but he gives the movie’s finale a satisfyingly gruesome kick with a waterlogged comeupance worthy of Tales from the Crypt.

Kino Lorber’s new Blu ray is not a reference quality transfer by any means but looks very nice indeed – a little soft but the black levels are more than suitable for a castle-bound thriller with only candles for illumination. The long-time Universal lenser Irving Glassberg was responsible for those shadowy garrets – he had a wonderfully diverse career, doing doing stellar work in black and white and color including Douglas Sirk’s widescreen The Tarnished Angels and the glorious Technicolor palette for Anthony Mann’s Bend of the River.

KL has included a new commentary track with David Schecter, Tom Weaver and Dr. Robert J. Kiss but the most telling extras are the assortment of trailers in the bonus section including Witness for the Prosecution and Black Sabbath – each film starring Laughton and Karloff at the top of their formidable games and each performance shining an unfavorable light on the underwhelming aspects of The Strange Door.