Billy Wilder’s Buddy Buddy (1981) might be one of the most obvious go-to examples in the annals of conventional wisdom when it comes to the cinephile’s parlor game of pointing out a great director’s greatest foible. Upon release the movie was summarily dismissed by critics and ignored by audiences—it managed a paltry $7 million domestically, three million less than its production budget. 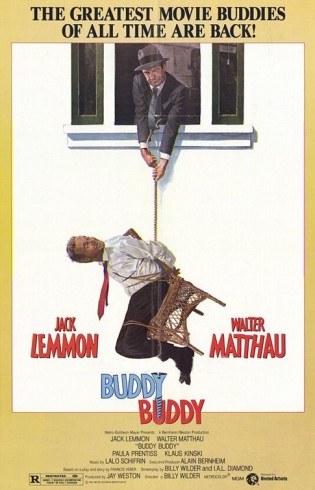 Roger Ebert, in his review, called Buddy Buddy “a comedy without laughs,” one apparently so vile that it could inspire not only audience indifference but also one of the revered reviewer’s laziest pieces of criticism. Ebert’s short piece quickly degenerates into name-calling– “This movie is appalling” is the first sentence of the review, and the movie’s name goes unmentioned until the second paragraph—sans much in the way of actual insight. And unfortunately the critic’s disdain ends up functioning as a substitute for examination of what the movie actually is, unless you count Ebert’s characterization of Wilder’s picture as being “like one of those pathetic Hollywood monsters drained of its life fluids,” with no elaboration forthcoming as to exactly which pathetic Hollywood monster is being evoked.

Most reviewers followed suit– one exception being Richard Corliss, who recommended Buddy Buddy to the unsuspecting readership of Time magazine– and the picture inauspiciously slipped into movie history as a first-ballot hall-of-shamer without much further regard.

Wilder would never make another movie after Buddy Buddy, and in his conversations with Cameron Crowe the director reached for some sort of rearview-mirror explanation for why the movie was a failure. Buddy Buddy, Wilder claimed, “was not the kind of comedy I had an affection for” and offered the speculation that if an audience laughs at this sort of material they end up resenting it, “because of the negativity—dead bodies and such.” A strange claim, one might think, coming from the man who once mined comic gold from the St. Valentine’s Day Massacre and who was well acquainted with the function of cynicism as a satirical tool. (I’m unaware of Wilder ever checking in on the cinema of, say, Quentin Tarantino, not to mention the proliferation of hitman-oriented comedies that came in Tarantino’s wake, but if anyone can direct me to such comments I hope they will do so.)

Wilder was offered the adaptation of Frances Veber’s 1973 farce A Pain in the Ass (from Veber’s play) by MGM as a project with longtime screenwriting partner I.A.L. Diamond, and Jack Lemmon and Walter Matthau, teamed twice by Wilder already in The Fortune Cookie and The Front Page, were quick to sign on. Wilder was undoubtedly feeling pressure to bring his movie up to date with current standards in terms of sex and language, which resulted in a movie that most who hated it dismissed as evidence of the director being “out of touch” with modern audiences. But of course, the most obvious thing about Buddy Buddy, especially considering that many of its most vocal detractors were well-versed in at least the high points of Wilder’s career, is how very much like a typical Billy Wilder movie it feels.  The thing that, I suspect, throws lots of viewers, is that in many ways Buddy Buddy seems as though it was made in and somehow transported from 1966 and placed on MGM’s 1981 Christmas release schedule, its other-era societal reflections left untouched by the influences of political correctness, acknowledgement of the shifting rhythms of Hollywood comedy or even, in some instances, common sense.

Despite its French pedigree, Buddy Buddy is very much a movie made by the man who wrote and directed Kiss Me, Stupid, as well as my favorite jackhammer political comedy of all time, One Two Three. It shares with those movies a strange mixture of the sophisticated and the puerile, a “get off my lawn!” attitude toward encroaching and inevitable social and sexual realities that can be as hilarious as it is disorienting. And it is by this very odd time-capsule effect, this retreat to within norms and functions and style which were specifically identifiable as having had their genesis from the cantankerous brain of Billy Wilder (a retreat perhaps compelled by the reaction to the smothering self-reflection of Fedora), that the charms of Buddy Buddy can be located.

Walter Matthau’s Trabucco, a hit man with little tolerance for distraction while on the job, is first seen in the disguise of a mailman, delivering a package to a mailbox that looks suspiciously rural to be perched, red flag up, on the sidewalks of Beverly Hills. The package, which turns out to be a bomb, is opened and exploded by a gravelly-looking mug who saunters out of his house draped in a robe which looks more like a straitjacket than a casual morning garment, the sort that was replaced by mugs of this sort (myself included) with gym shorts and a T-shirt a decade or so before Wilder staged this scene. Next up, Trabucco disguises himself as a milkman who delivers a bottle of poisoned milk to the doorstep of yet another unsuspecting Beverly Hills resident who is apparently engaged in a very loosey-goosey program of witness protection headed up by some particularly witless police officers. The two very easily accessed dead men were potential government witnesses to a crime boss’s involvement in a shady land deal, and it’s Trabucco’s mission to shut them up before they get their day in court.

Soon after, Trabucco crosses paths with the aggressively avuncular and self-absorbed Victor Clooney (Jack Lemmon), a high-strung standards-and-practices executive at CBS. (“You’d call it censorship,” he offers in self-defense to the supremely deadpan and disinterested killer.) Clooney, distraught over having been ditched by his wife for a screwy sex cult guru (Klaus Kinski as Dr. Hugo Zuckerbrot, whose offices are decorated with Chinese erotica and whose every appearance is accompanied by a sitar on the soundtrack), chooses the very hotel from which Trabucco plans to assassinate the final witness, to stage a series of suicide attempts which will inevitably draw attention to Trabucco, himself perched with a 30.06 pointed at the courthouse steps across the street where the witness will soon appear under police escort.

Add to the mailbox and milk bottle the cracked notion that even in 1981 an assassin could so easily access such a publicized crime figure whose two other confederates have already been killed, and you begin to key on the insularity with which Wilder and Diamond created Buddy Buddy. And the movie’s disregard for modes of irony and youthful irreverence which were making a popular surge (the ripple effects of Saturday Night Live and National Lampoon’s Animal House were still dominating the culture of comedy) are evident in the presence of Wilder’s familiar and unhurried long-take style, the functionally flat lighting provided by cinematographer Harry Stradling, Jr., and particularly in its embrace of Wilder’s crotchety, satirically mothballed attitudes on the counterculture (hippies who would have been embarrassing in 1967 are somehow stranded in 1981); racial portrayals (that Mexican hotel maid—iMadre di Dios!); dated gags about the sexual revolution (“Premature ejaculation means always having to say you’re sorry!”); and even throwaway observations about everyday life, like that mailbox and milk bottle.

You’ll have to forgive me if all of this sounds like the foundation of an epic pan, but I promise you it’s not. Despite Buddy Buddy being quite literally at least 15 years out of its time and appearing clunky and listless by standards of comic hyperactivity circa 1981, to say nothing of 2016, I find its hermetically sealed nuttiness extremely appealing, to say nothing of frequently hilarious. The movie plays like nothing so much as an aging director’s defiant “fuck you” to a system he could sense was about to toss him to the curb, a last blast of venom disguised as a tired formula comedy. It’s not hard to see Wilder’s sense of antipathy and resignation embodied in Matthau’s ace deadpan performance, which for the casual viewer is the single best reason to see Buddy Buddy. The barely concealed hostility beneath the drooped eyelids, which becomes enflamed by Matthau’s dead-eyed stare at anyone and anything—usually Lemmon—standing in the way of the completion of his mission, is the work of an actor who knows when to turn it on and when to let a muted reaction carry the day. Certainly there’s no funnier, or more resonant moment in the movie than when Matthau collars the hotel bell boy to prevent him from reporting Lemmon’s first suicide attempt with a little gentle persuasion: “Don’t you think that poor son of a bitch has enough trouble? He doesn’t need cops, he needs sympathy, understanding, a little human warmth!”

Lemmon’s Clooney, on the other hand, offers a slightly more mixed bag. The actor never finds a balance between Clooney’s insecurity, which should be cushioned somewhat by our sympathies, and his own mannered affectations, which in 1981 were already on their way to becoming a running gag on The Simpsons. Lemmon has his moments (“Have I done something to offend you?” Clooney pleads to Trabucco, after a movie’s worth of having done nothing but), and if you ever loved him and Matthau together, for Wilder or for anyone else, you’ll likely find lots to enjoy here. But clearly Wilder, all reservations expressed to Cameron Crowe aside, is on the side of the killer here. It’s hard to imagine the writer-director didn’t get a silly kick out of having Matthau toss off a “fuck off” in his costar’s direction as they (temporarily) part company near the picture’s conclusion. 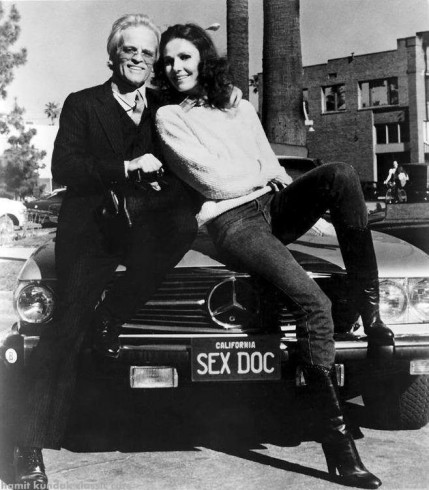 The whole of the picture’s appeal seems nestled in the final images of the hit man having made it to retirement on his South Pacific island (“On a clear day you can see Tahiti”), having gotten away with it all. Trabucco watches a snowy Pittsburgh Steelers football game on a shitty portable TV with rabbit ears (Rabbit ears picking up network TV in the South Pacific! Right!), only to have his tropical paradise blitzed by the reappearance of Clooney, who’s tracked him down over 93 islands after having made his own criminal exit from society.

By 1981 Wilder had done it his way. He was headed off to a life of retirement, collecting art and enjoying being feted by younger, talented artists who were smart enough to understand and appreciate his contributions to film history. Yet the bad reviews for Buddy Buddy, his ignominious swansong from the picture business, continued to swarm around his head. And just like Trabucco, as he preps the unsuspecting Clooney for a rekindling of the local natives’ tradition of human sacrifice to the volcano that looms over his island paradise, it’s fun to imagine Wilder climbing that volcano, tossing the bad reviews, if not some of the more annoying reviewers themselves, into the mountain’s fiery maw and yelling, “Here’s a little human warmth for ya! And I’ll set up a mailbox in Beverly Hills if I goddamn well want to!”

(Buddy Buddy is unavailable on DVD, but it can currently be seen on YouTube.)