There’s a storm outside, the cook has drunk herself to sleep, the other servants are gone, the old lady is an invalid — and the helpless mute maid is trapped indoors with a murderous maniac. No, it’s not a Reality Show about the White House, but Robert Siodmak’s superior ‘old house whodunnit’ that is equal parts Americana, film noir and proto- slasher horror. 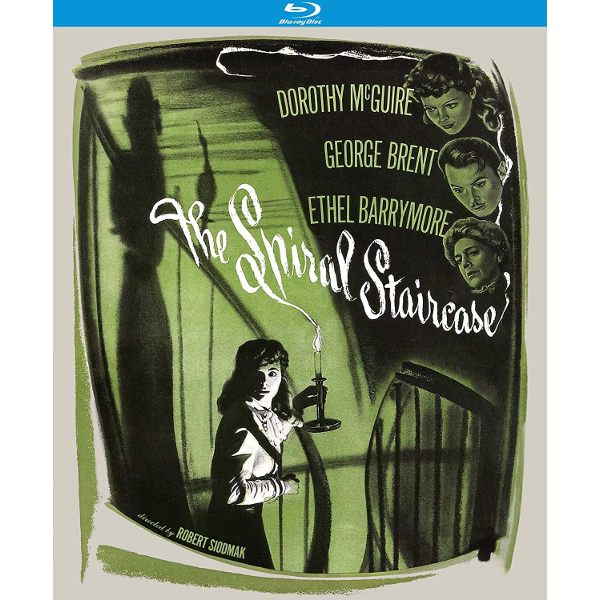 The handsomely produced The Spiral Staircase is one of the plum productions that helped Dore Schary win the top job at RKO. Schary’s The Farmer’s Daughter was almost a complete package purchased/inherited from David O. Selznick, and we’re told that Selznick at one point wanted this property for Ingrid Bergman as well. On a roll of mostly hits starting with 1943’s Claudia, Dorothy McGuire surely relished the opportunity to play a mute servant in a tight spot, although Jane Wyman would be the one to make the audience-pleasing gimmick pay off come awards time a couple of years later in Johnny Belinda. This thriller certainly helped director Robert Siodmak step up a rung in the Hollywood director hierarchy; his next show would be the mega-hit The Killers.

The spooky premise boils down to a standard Old House who-dunnit, in an interesting setting: a small town populated by equally small-minded citizens. In this place of petty rivalries and competitiveness, our lonely heroine doesn’t receive a lot of sympathy. Impressive B&W photography by Nicholas Musuraca enforces a darkening mood as the afternoon gives way to the kind of gothic rainstorm preferred by creeping killers. And with the help of visual effects man Vernon Walker, Robert Siodmak shocks the audience with startling expressionist images of the kind we now associate with horror films.

On her day off from the Warren manse, mute servant Helen (Dorothy McGuire) enjoys a silent film in the lobby of a hotel. Just upstairs, a club-footed woman (Myrna Dell) is murdered by an unseen maniac with a weird staring eye. The local constable (James Bell) sees a pattern in the killings, while the elderly doctor Harvey (Erville Anderson) resents the presence of a new, young doctor Parry (Kent Smith). Dr. Parry gives Helen a ride partway home. He urges her to look into a possible new cure for her affliction, while also suggesting that they should perhaps marry.

The Warren household is not a happy one. The bedridden Mrs. Warren (Ethel Barrymore) suspects big trouble, and repeatedly warns Helen to get out of the house without delay. Her sons are not happy either. Professor Warren (George Brent) resents his recently returned younger brother Steve (Gordon Oliver), who has attached himself to the Professor’s secretary and former girlfriend Blanche (Rhonda Fleming). The other servants are thinking of leaving, especially Nurse Barker (Sara Allgood) — Mrs. Warren hates her. As a couple Mr. and Mrs. Oates (Rhys Williams & Elsa Lanchester) take care of daily duties, but Mrs. Oates drinks too much. Dr. Parry isn’t particularly popular in the house, either. As the storm grows more intense, Mrs. Oates keeps finding windows left open. The weird eye appears, to stare at Helen, and before the night is over another killing will occur.

The Spiral Staircase sounds as good as it looks, what with the eerie music of Roy Webb helping to sell the darkening woods and creepy interiors of the Warren House. The hostile environment is the exact opposite of the wholesome image that ’40s Hollywood assigned to rural America of the horse & buggy days. Gawkers in the hotel want to learn the details of a murder. The lazy old doctor tries openly to ruin the reputation of the younger newcomer. In the Warren house, Blanche’s dalliance with Steve is neither above board nor particularly graceful, what with his disdain and her earlier affair with Steve’s tolerant brother. The servants are angry (Nurse Barker) or reluctant to go out into the storm to get important medicine for Mrs. Warren (Mr. Oates). Mrs. Warren is convinced that a murderer is in the house, but doesn’t know what to do except tell Helen to get out.

Playwright and radio writer Mel Dinelli scored big with this screenplay adaptation; his name would soon grace the well-regarded films noir The Window and The Reckless Moment. For a whodunnit it’s topflight stuff, with plenty of possible killers lurking about, and all those doors and windows left open. It probably wouldn’t find favor in the contemporary PC sweepstakes, as our endangered heroine Helen is a fairly defenseless potential victim, unable even to make a phone call for help. She doesn’t become hysterical, and demonstrates an admirable Nancy Drew move or two, yet plays most of the story wide-eyed and helpless. Today no writer could win a pitch with this sort of shrinking-violet type female character; the big deal at the moment is in fact a remake of Halloween in which an older Jamie Lee Curtis will undoubtedly prove more formidable than a score of faceless killers.

Ms. McGuire gives Helen nice touches of vanity and imagination, as she regards herself in the mirror and fantasizes a future wedding to Dr. Parry. One of these scenes is immediately undercut by a disturbing montage of ‘staring eye’ visuals, that literalize the mad killer’s objectification of his intended victim. Helen also appears in a strange, Buñuel- like close-up with her mouth ‘erased.’ When the murderer’s full motive finally emerges it’s disturbing as well: the killer’s mission is to cleanse the world of physical imperfection. We’re reminded of other dark secrets of awful turn-of-the-century notions of ‘science,’ such as the monstrous doctor of Kings Row using his scalpel to punish youthful sin. The philosophy of distorted Eugenics seems involved as well: once one takes discrimination to a logical extreme, one can justify eliminating entire races of people. The cast is a little uneven. Barrymore is fine but the others seem overly subdued. George Brent’s older son is especially passive, exhibiting a weak concern for Helen. Elsa Lanchester is usually asked to add eccentric touches, but here she barely brightens when she finds out she’ll be able to sneak more brandy for herself from the cellar. Rhys Williams and James Bell are just about perfect-neutral (everybody has to be given latitude to be a potential killer). Sara Allgood’s one-note nurse isn’t given a chance to be more than a scold.

What should be a great part for Kent Smith isn’t, just because he’s basically so dull. His good doctor sounds like a nice companion for Helen, but with reservations. Dr. Parry simply tells the mute Helen how things are going to be, and apparently takes her mild smiles as wild enthusiasm. I should think a couple would require a special adjustment to get along, if only one of them can talk — Parry would do well to wait until Helen is cured before he proposes. I can imagine a hilarious sequel, in which Helen is revealed to have the grating voice of Lina Lamont in Singin’ in the Rain. Voice-match compatibility is important. I’ve heard many amusing and even charming voices that would drive me nuts in only a couple of days.

The lovers Rhonda Fleming and Gordon Oliver are weirdly unappealing. She’s unhappy and ashamed, and he comes off as a real jerk. Oliver won a number of okay film parts but would later clean up as a TV producer with credits on such popular fare as Mr. Lucky and Peter Gunn. Considering the specific events in the cellar, it’s not difficult to imagine a more cold-blooded variant of this story, in which Oliver’s Steve Warren ends up like Barbara Steele at the end of Pit and the Pendulum.

As pointed out by commentator Imogen Sara Smith, The Spiral Staircase lands smack in the middle of a stack of 1940s movie trends. With its sensitive visuals and tone of unease, it certainly carries values associated with film noir. The expressionistic jabs at horror visuals point us in the direction of later psych-horror and Euro-horror thrills. And all it needs to become a full-fledged Gothic is a mysterious portrait hanging somewhere in the house. The notion of a psychological block causing Helen’s inability to speak is very much a theme of the Freud-happy 1940s. Happily, the screenplay doesn’t over-stress the mechanism by which the problem is reversed.

The film isn’t quite as compelling as other pictures by Robert Siodmak, perhaps because it doesn’t choose to go in one of those generic directions — the jeopardy aspect could have climbed a bit farther up the scale. The Siodmak/Musuraca atmospherics never quite gel, as they definitely do in shows by Jacques Tourneur; Tourneur usually puts a humanistic spin on his characters as well. Mechanically The Spiral Staircase is without fault, and it’s more than satisfying. Its particulars have never stuck in my memory for long, but that only served to make this re-viewing seem fresh. The KL Studio Classics Blu-ray of The Spiral Staircase is a fine transfer of this very handsome B&W show. Some of these ABC controlled titles are in need of restoration but this title looks to be in very good shape.

Nicholas Musuraca’s carefully tuned imagery may not be as bold as work by Robert Alton, but the setting might be silly if transformed into a nightmare pattern of light and darkness, such as in Alton’s The Spiritualist. Ordinary people can live in the Warren house.

Kino’s show benefits from a thoughtful commentary by the esteemed Imogen Sara Smith, who dispenses volumes of good research along with reasoned analysis and thoughtful opinions. Ms. Smith writes often about noir but she clearly is not limited by that point of reference. My appreciation for the movie went up several clicks while listening.

A radio adaptation is included as well, along with a stack of trailers.