He’s mean, he’s nasty, he carries a razor and he’s dating your sister! Cosh Boy was front & center in 1953 debates about ‘what’s wrong with the British cinema.’ It holds up well, if not as PC social comment, then as solid exploitation fare, with our verminous hero putting the moves on tough-but-vulnerable local girl Joan Collins. The entire cast will want to stand in line to get revenge against Roy Walsh, the punk who steals from his own mum and lets his criminal gang do the dirty work. Take it from me, he’s a dirty rat. 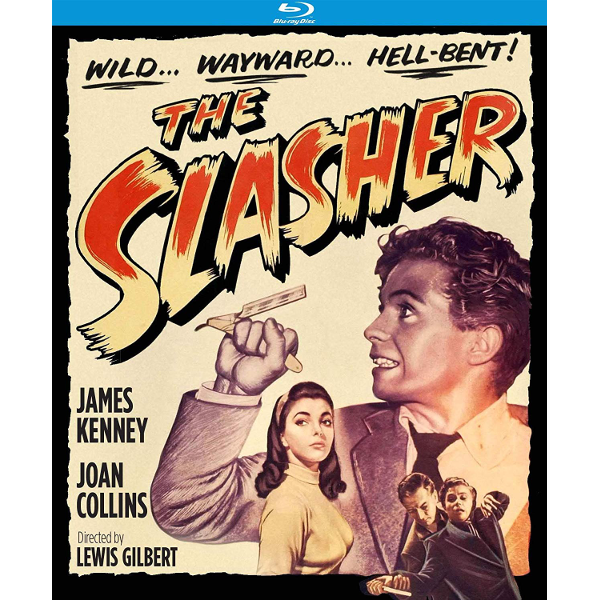 … did Lewis Gilbert hear the 1966 Peter and Gordon song, and think, ‘I wonder if that’s me?’  The first official ‘Certificate X’ movie in England is said to be The Slasher (Cosh Boy), which Lewis directed in 1953. (Some sources name it as ‘among the first.’) The English censors experienced real grief with movie trends in the post-war period. Even if they saw merit in things like They Made Me a Fugitive or Brighton Rock, incensed newspaper editorials would condemn the films as immoral and an incitement to violence for teens and young adults. They could point to the rising wave of savage incidents, blurring the line between delinquency and gangsterism. That was the year that the notorious Derek Bentley case grabbed London headlines. In Let Him Have It, Peter Medak’s 1991 telling of the Bentley story, young hoodlums walk a dark street under a movie poster for White Heat, a prime example of the American influence supposedly glorifying crime and schooling decent Brit youths in criminality.

English movies about juvenile delinquency took the same tack as some American productions: noting broken families and economic hardships, but also insisting that delinquents are just NDG — No Damn Good. This picture follows in the footsteps of a popular exploitation picture called Good Time Girl (1948), with Diana Dors. Cosh Boy is a serious study of teen crime but also one that very carefully absolves society, social services and well-intentioned parents from responsibility. The troubled protagonist is no victim of anything but a vicious, selfish punk out for all he can get.

The well-produced show appears to have been filmed on a combination of real locations and a high-grade studio back lot. Genre fans take note, as some of the key creative personnel later became heavy hitters at Hammer Films. When Lippert Pictures (more Hammer connections there) imported Cosh Boy the title was changed to the uglier The Slasher, as nobody here knew what ‘cosh’ meant.

A cosh is a sap or a blackjack, the prime tool of thugs that smack helpless women over the head to steal their purses. For a good education in Brit thuggery see Stephan Frears’ 1984 The Hit, where the ultimate hoodlum Tim Roth shows off his entire inventory of nastiness. They include a stiff wire for blinding an opponent and razors in his shirt collar to slash opponents that try to grab him by the lapels. Our ‘cosh boy’ eventually wields a gun, and finally a straight razor. I believe that Graham Greene’s teen killer Pinkie Brown in Brighton Rock is primarily a razor boy.

The screenplay for Cosh Boy smooths out some but not all of the film’s origins as a stage play. Roy Walsh (James Kenney of Captain Horatio Hornblower) runs a nasty little gang that beats and robs helpless old people, for whatever money they might be carrying. Their victims include Queenie (Hermoine Gingold), an apparent prostitute. Roy typically bullies his confederates into taking the real risks, including the not-too-bright Alfie (Ian Whittaker). Caught in the act, the boys feign contrition and are let free by a magistrate with the proviso that they spend their time at a youth club… which Roy simply uses as an alibi-generator for his on-going petty crime wave. Roy’s mum Elsie (Betty Ann Davies of It Always Rains on Sunday) is blind to his screaming insincerity, and indulges him beyond all reason. Grannie (Nancy Roberts) sees through Roy’s contemptuous games; he’ll eventually steal her savings to pay part of a debt. Alfie’s sour mum (Hermoine Baddeley of Mary Poppins) knows what’s up with the boys, but Elsie won’t listen. Three story threads are woven together. Because Roy has terrorized his gang into silence, the cops (including Laurence Naismith) have difficulty connecting him with any specific crime. Roy hates his mother’s new suitor Bob (Robert Ayres), a responsible man who wants to ‘bring Roy into line.’ And Roy pursues Alfie’s sister, the local beauty René (Joan Collins) by boasting that he can get her anything she wants. To get René’s steady boyfriend out of the way, Roy has him beaten so badly that he’s put into the hospital.

If the original play showed any sympathy for Roy Walsh, it’s been removed. The good-looking, two-faced Roy can be counted on to wreck the life of anybody who trusts him. His ‘nice’ mom is a pushover for his sweet talk, his mates do what he says mostly out of fear, and the outwardly worldly René is a pushover for his sweet talk. The basic message of Cosh Boy is that some kids are too toxic to deserve tolerance. The cops can only do so much. Roy has alienated his pals, gotten in debt to established criminals, stolen from his family and driven a good girl to a terrible act. His dumb crimes have gone way too far, with a shooting incident. The boring, square Bob becomes our only hope, and his only remedy is to take a belt to the near-hysterical Roy. When cornered, Roy is reduced to a cowardly, whining creep, like Vic Morrow in Blackboard Jungle. Jack Webb would approve of the cops, who delay Roy’s arrest to allow Bob time to give the boy the beating he deserves. It’s a far cry from the apologetic viewpoint of Rebel Without a Cause, which spreads the blame across society in general, and makes its innocent teen protagonist into a modern martyr.

A bit of the psychological James Dean influence eventually reached England with 1958’s teen crime tale Violent Playground (1958). Some of the blame is deflected from the highly dangerous hoodlum played by an impossibly young David McCallum, a punk-maniac who threatens a classroom of youngsters with a machine gun!

The playing is all good. Lewis Gilbert had been directing for nine years; we don’t know if he was already established or if the notoriety of Cosh Boy was a boost to his career. Within a few years Gilbert was attracting major attention on our side of the pond as well: Carve Her Name with Pride, Sink the Bismarck!  We really need his Michael Caine movie Alfie out on a quality disc.

The presence of Joan Collins will prompt some curiosity purchases. She’s only 19 or 20 here, just a couple of seasons past her walk-on debut in something called Bikini Baby. Her initially-streetwise René has maybe 12 quality on-screen minutes, in which time she finds out what a horrible heel Roy can be. Two years later Ms. Collins would be commanding a major role in Land of the Pharaohs, leaping past Diana Dors to become England’s sexiest femme export. Fans more familiar with Collins’ story will know if Cosh Boy contributed to her career, or (more likely) if Howard Hawks met her and was simply knocked off his feet. Mark McMorrow of the page Joan Collins in Glamour Land calls this show one of Joan’s ‘Coffee Bar Jezebel’ roles. The posters certainly played up Collins’ sweater appeal.

Phil Hardy’s encyclopedic The Gangster Film tells us that Cosh Boy was released around the same time as the murder trial for Derek Bentley, and benefitted from the connection — would jurors have been influenced by the film’s condemnation of Roy Walsh?  High-toned editorials could be counted on to demand the film be banned, along with those awful American comic books that were perverting English youth. We’re also told that the censors did force Romulus Films to tone down some of the violence. Of the several muggings and a shooting that are depicted, some are seen in long-shot, or happen off-camera. The KL Studio Classics Blu-ray of The Slasher (Cosh Boy) is an excellent encoding of this well-made crime drama; fans looking for glamorous images of Joan Collins will get a selection of attractive close-ups. The film covers what would later be called a ‘kitchen sink’ environment, but from a slightly stagey perspective. Crystal clear audio is a key benefit of these Studio Canal remasterings — on DVDs from twenty years ago even the great Alec Guinness comedies often had distorted, ‘crunchy’ sound. The flat aspect ratio looks correct and jibes with the film’s February 1953 release date.

Besides some trailers the one extra is for the alternate American title sequence, which substitutes the main title and adds a credit for Robert Lippert’s company. By this time Lippert was investing heavily in English production, often supplying the needed American star in exchange for the U.S. distribution rights. Promoted under its original title, Cosh Boy is one of five shows offered in a separate Kino release, the DVD-only British Noir II: Five Film Collection, with The Interrupted Journey,  Time is My Enemy,  Time Lock,  and The Vicious Circle.

One disc drawback is the lack of subtitles. Even with the clearly recorded dialogue some lines might be lost to U.S. ears because of local jargon and phrasing. An English film critic might have an illuminating opinion about the accents represented in the film, that I can only guess at: does Joan Collins speak as if she comes from this working-class environment?

With the current, welcome explosion of fine Blu-rays of films controlled by Studio Canal, we have hopes that more Brit and Euro crime pix not well-known here will show up… the more exotic, the better.