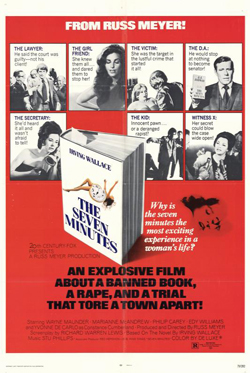 Russ Meyer, legendary for his lascivious approach to cheerfully lurid fare like Faster, Pussycat! Kill! Kill! and Vixen, plays it relatively straight in this adaptation of trash-meister Irving Wallace’s free-speech manifesto on pornography. The result is neither fish nor fowl and something that had never existed till The Seven Minutes – a dull Russ Meyer movie. Even so, Meyer’s editing rhythms are so out of the mainstream that it’s still almost experimental for a Fox studio movie. The 1971 release starred Wayne Maunder and Meyer mainstays Edy Williams and Charles Napier along with a few ringers including Yvonne DeCarlo, John Carradine and Wolfman Jack.