Michael Winner is the bad-taste choice to give The Exorcist a run for its money in the faux-religious horror shocker sweepstakes, and the brave actress Cristina Raines leads an impressive supporting cast as the unfortunate suicide attemptee chosen to be the new Gatekeeper for the portal to Hell. Don’t expect to see a Keymaster, but instead some of the most indigestible exploitation of the mainstream decade — mainly real sideshow oddities to represent ‘evil’ people. Easily the hands-down insensitivity champ of the ’70s. 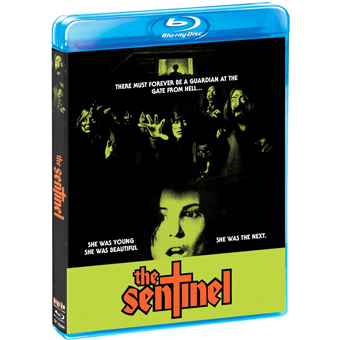 Even genre enthusiasts slam the work of Michael Winner, although he must have attracted loyalty in some way because he worked more than once with Charles Bronson and Burt Lancaster, and even got Marlon Brando into a prequel to The Turn of the Screw. That show provoked a critical torpedo I’ve never forgotten: “(Michael Winner) persists in failing to find a suitable camera position throughout the film.” The camera direction of this adaptation of Jeffrey Konvitz’s post-Exorcist horror tale isn’t half bad, but in terms of taste and discretion Winner’s choices are appalling. The Sentinel did help start a fad (rash, plague?) of mostly Italian horror films about doorways to Hell. And it has collected fans for its trashy content, some startling gore effects, and a supporting cast of eccentric stars gone past their sell date. It seems to have been largely forgotten despite being the key inspiration for 1984’s spook-show comedy Ghostbusters. 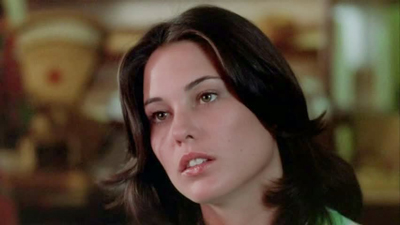 It’s New York in the ’70s. Busy fashion model Alison Parker (Cristina Raines of Nashville) balks at marrying or moving in with her handsome attorney boyfriend Michael Lerman (Chris Sarandon) and goes looking for an apartment of her own. Rental agent Miss Logan (Ava Gardner) shows Alison a beautiful ancient walk-up on the river, for only $400 a month, and Alison readily takes it. She’s not worried about the blind priest on the top floor, Father Halliran (John Carradine) but she’s taken aback by her other neighbors. The nosy Charles Chazen (Burgess Meredith) doesn’t respect her privacy, and the weird lesbians downstairs (Sylvia Miles & Beverly D’Angelo) offend her with an obscene display. Alison suffers headaches and fainting spells, which spoil her photo shoots. A nightmare flashback to her father consorting with prostitutes and her own suicide attempt sends Alison screaming into the street. As she’s covered in blood, the police (Eli Wallach, Christopher Walken) get involved; they’re still trying to prove that Michael had something to do with the death of his first wife. Michael, meanwhile, finds that the Catholic Church owns Alison’s building. Getting nowhere with the troubled Monsignor Franchino (Arthur Kennedy), Michael hires a burglar (William Hickey) to help him break into church records, and finds some very scary documents. And Alison is shocked into silence when Miss Logan tells her some alarming news about all those strange neighbors she’s met. 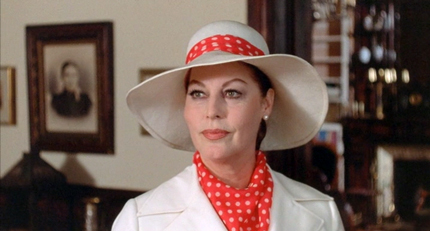 The Sentinel returns to the sleazy pseudo-religious hysteria generated by William Friedkin’s The Exorcist. The Catholic Church, you’d better believe, is engaged every minute in a fierce battle with the forces of Satan. In an Italian-set prologue, Arthur Kennedy’s monsignor consults with a grim red-robed official, a virtual walk-on by José Ferrer. Our leading lady is in bad shape with her faith, it seems, due to her suicide attempts; her fallen status makes her the ‘chosen one’ for an important future role. Most of what we see is too ludicrous to be taken seriously, yet the film could rightly be subtitled ‘Galloping Misogyny.’ Actress Raines holds the story together very well, considering that the screenplay asks her to behave so oddly. She seems reasonably content to proceed normally, even in the face of insane hallucinations and horrifying events that defy explanation. Burgess Meredith’s neighbor treats Alison almost as weirdly as Noël Coward did Carol Lynley in Bunny Lake is Missing, while the combined gross-out of Sylvia Miles and Beverly D’Angelo must have been included because The Exorcist demanded something extreme. As an actress Ms. D’Angelo is fearlessness personified. And I thought she was daring to go briefly topless in 1979’s Hair.

Like Otto Preminger’s Lynley or Mia Farrow in Polanski’s Rosemary’s Baby, Cristina Raines must play the part of the put-upon heroine who does irrational things for the sake of horror titillation. What? You say you hear strange noises upstairs? In a spooky apartment building in the dark? Let’s go investigate alone, barefoot and nearly naked! 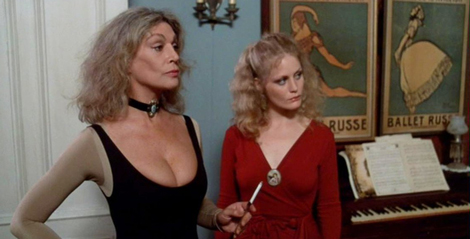 Raines is quite good despite not having much of a character to play – her Alison is never really cognizant of what’s going on around her. The dupe of dastardly schemes by both Satan and the Church, she’s the definition of the ‘poor dumb victim girl’ that haunts so many horror pix before Hollywood (or the culture) discovered assertive heroines. We still care about Alison at the fade-out, and that’s something. This movie’s unpleasant message is that The Catholic Church, as guardians of the cosmos, don’t give a damn about individual humans. The Exorcist treated its high-level diocese officials as an ultimate authority, like the spymasters of MI-6. The Sentinel’s church officials are ruthless, pragmatic conspirators: the sinful Alison has been magically anointed to serve a sanctified purpose, and that’s that. Nothing she needs or wants matters.

Winner’s direction is not bad in the mechanical sense, as the story plays out in a straightforward, easy to follow manner. He does nothing at all with his actors. The stars doing all the glorified cameos perform their parts competently and nothing more. We like seeing José Ferrer, whose entire performance boils down to two stares at the camera, looking ‘concerned.’ Ava Gardner is very polished; she seems happy doing her part even though nothing comes through of the fact that her character must also be a key conspirator in league with the priests. 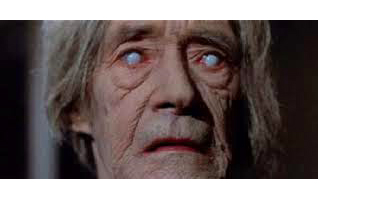 Sarandon’s oily boyfriend is used much like John Cassavetes in Rosemary’s, even though his villainy doesn’t emerge until the end. His performance is odd, and often sounds dubbed; he doesn’t seem to have been given any useful direction either. The numerous other actors — big stars, most of them — are professional in forgettable parts, bringing the screen to life when they’re on and disappearing from our memory when they’re gone.

That leaves the effects and shock scenes to make up the difference. The Sentinel comes through on that score, even though it scrapes the bottom of bad taste in doing so. Dick Smith’s makeup effects are truly startling. Quick cutaways to Cristina slicing off a man’s nose, and pus boiling up out of his eye socket, seem real when compared to the Pla-Doh nonsense in some of Lucio Fulci’s gore-fests. John Carradine’s makeup is also first-rate, so much so that Carradine, at this point taking on the lowest of paying jobs, emerges from the film with his dignity intact. The makeup for Cristina Raines in the final scene looks horribly uncomfortable, especially with those full-orb contact lenses. Unless other scenes with this makeup were filmed and cut out, her participation seems completely unnecessary. All we see is a motionless, staring face that Dick Smith could easily have created as a dummy, sparing Ms. Raines the pain and inconvenience. Knowing the history of the shoot, I wouldn’t be surprised if Michael Winner saw it as an opportunity to torment his leading lady.

At the grand finale, various ghosts militate against poor Alison, which director Michael Winner visualizes in an entirely distasteful way. They’re supposed to be the souls of executed criminals, all horrible murderers, etc. Two are presented as offensively crude lesbians, so off-putting that they encourage fear and loathing of non-straight sex in any form. Falling back on the hateful notion that beauty and virtue go together. Winner uses genuine sideshow oddities to portray other demons and damned souls. Winner shoves these grotesques into our faces more offensively than ‘freaks’ have ever used — we’re meant to take their unfortunate appearances as Evil. No wonder nobody in the film seems to be having a good time. The Sentinel lacks the technical wallop of The Exorcist, but it’s just as hateful. 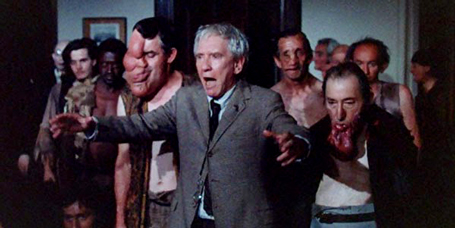 Shout! Factory/Scream Factory’s Blu-ray of The Sentinel is a great-looking disc. The film is fairly attractively shot, providing some handsome images of the gorgeous Ms. Raines as she gauges her reactions to scores of unpleasant situations. When her character is uncomfortable we feel genuinely concerned. Raines does well with all of her physical scenes, especially when she has violent fainting spells in the middle of fashion shoots.

The image is soft only during the opticals for the title sequence. Albert Whitlock transforms the interesting haunted apartment building with a matte painting, and the illusion is nearly perfect. Gil Melle’s interesting soundtrack tries various approaches to the material, without finding anything that really works.

Disc producer Cliff MacMillan provides three commentaries, giving us very different viewpoints of the production. Director Winner passed away in 2013 so I’m not sure when his commentary was recorded. He’s not exactly a charmer; in the first scene he rushes to point out his Rolls Royce, parked prominently in a shot. He’s quite successful, did you hear?

Unlike the virginal Savant, Mondo Digital’s Nathaniel Thompson is no stranger to films with extreme content. He covers the interview commentary with author/producer Jeffrey Konvitz, who needs only a prompt or two to tell us the entire history of his horror writing career and the good fortune he had with his novel The Sentinel. As I believe the movie is being remade, Konvitz has even more reason to be enthusiastic. 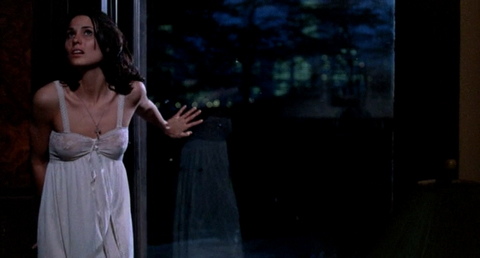 The third commentary gives us the film’s star Cristina Raines, accompanied by writer Shaun K. Chang, a devoteé of actresses of the ’60s and ’70s — a rough time for women in film to forge careers. Shaun knows the movie well. Its star does her best to recall everything she can from the shoot — which was so unpleasant that she’s tried to block it from her memory all these years. She’s careful not to speak too ill of her director, but eventually lets slip that Winner impressed more than one crewperson as incompetent and aggressively antagonistic. Because of the sour atmosphere on the production, there was little or no socializing. Raines can recall few stories about her co-stars. Since she worked a lot with Burgess Meredith, she found him fascinating. And Ava Gardner gave her advice about strategies to deal with producers. Raines also expresses awe and gratitude for makeup artist Dick Smith, show she says was a haven of peace and calm during an otherwise oppressive production. Comparing working as a model, to acting the role of a model, Ms. Raines offers that fashion and commercial shoots are normally pleasant and serene. She indirectly communicates the notion that Michael Winner’s horror film was a low point of her working life.

The disc also comes with a video interview with the film’s assistant director, Ralph S. Singleton. Once he gets past his personal story we hear some interesting tales from the set. Also included are a generous portion of trailers and TV spots, and galleries of Ad Art. Scream Factory definitely gives The Sentinel the full special edition treatment.