This Iranian import made news when its director found himself on the wrong side of the recent travel ban. It’s well worth the bother. Asghar Farhadi’s suspense story can’t be topped for maturity, insight or honest emotions about social stress: after an assault in a new apartment, the strain affects everything that a wife and husband do — driving a wedge through their marriage. Is it all built on a shaky foundation, like the crumbling apartment building they had to evacuate? 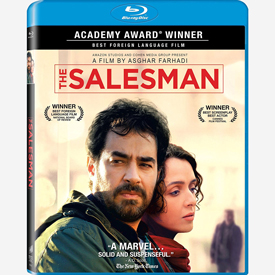 Iranian filmmaker Asghar Farhadi took home an Oscar for Best Foreign film several years back for A Separation. When this year’s The Salesman did the same, I thought it might have been a gesture by the Academy against Washington’s travel ban, which initially barred Farhadi from entering the country to attend the awards ceremony. Nothing doing. Although The Salesman takes place in Tehran, its drama is universally identifiable: violent events have a devastating effect on what seems a perfect marriage. We never forget that we’re in a place where women must cover their heads, where censors control what can be said in a theatrical play. The leading couple is as modern and internationalist as the Iranian theocracy permits . . . but are they as liberated as they think they are?

Emad (Shahab Hosseini) and his wife Rana (Taraneh Alidoosti) seem exceptionally happy. He teaches in a boy’s school, where his students seem to love him. They’re impressed when Emad shows them a conceptually challenging movie, and want to see the new theater production in which Emad and Rana play the leads, Arthur Miller’s Death of a Salesman. A makes their apartment building uninhabitable, so they take an interim apartment offered by Babek (Babek Karimi), a fellow actor. But one night Emad comes home to find blood on the stairs and the shower door smashed; neighbors have taken Rana to have her head stitched from cuts. Rana doesn’t say that a man entered and threatened her, out of shame. Emad finds out that the apartment’s previous tenant was a prostitute, and that the man probably thought he was visiting her. Emad finds a phone, money, and car keys left behind by the intruder, who left barefoot and bleeding. He left his truck behind as well. Rana doesn’t want to involve the police, who may conclude that she enticed the man inside. But she’s a traumatized wreck, and must be replaced in the play. Emad’s anger grows every day, as the neighbors ask questions and the word gets around that the ‘accident’ was an attack. He finally finds a way to track down the owner of the truck, and sets a trap for him. But the strain is affecting the marriage — Emad and Rana were once almost carefree, and are now barely talking to each other. 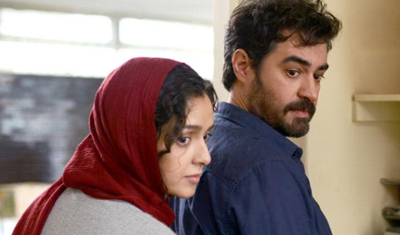 The Salesman had me on the edge of my seat with a special kind of suspense. Director Farhadi sets up warm, likeable people and then puts them under intense pressure. Emad initially teases Rana about their plans to start a family. He’s the first person to help a neighbor when their apartment building threatens to collapse. The sense of shaky foundations is apparent throughout the film, as so much depends on things being ‘correct.’ Do Emad and Rana have enemies? Is performing in an American play (by a Jewish playwright) making them suspect? An older woman in Emad’s carpool all but accuses him of touching her improperly . . . how serious is that? A fellow teacher tells Emad that there have been some complaints about books he brought to the school.

Farhadi’s use of an outside theatrical reference reminds us of the Spanish filmmaker Pedro Almodóvar. The play-within-a-play idea is not overdone, even as we look for parallels in the problems of Willy Loman. Even though the Arthur Miller play would seem a natural to critique American values, The Salesman doesn’t have an overt political slant, and nothing overtly anti-American. An odd detail is the ‘earthquake’ that makes Emad’s apartment unsafe. The tenants react to their walls cracking, but is it really an earth tremor? We do see a construction machine digging next door. Is it possibly responsible for undermining the foundation?

The real foundation being undermined is that of sexual politics. Even in the rigid theocracy, men still drink and visit prostitutes. Another actress in the play has the role of a prostitute, which puts her under enormous pressure. Even though the character is supposed to be half-dressed, the actress must be fully clothed with her head partly covered. Her bright red coat perhaps symbolizes the ‘forbidden, shameful’ female body beneath. A young woman like Rana cannot afford to let anyone think her morals are in question, even by talking to a strange man. Young women are presumed to be the source of trouble: the first question in any attack is, ‘why did you open the door?’ Rana and Emad would never have taken the apartment had he known who lived there before. Nobody is presumed innocent. What if someone denounced the couple as immoral, claiming that Rana was seeing men on the side, or that Emad molested women in cars?

We keep waiting for standard melodramatic developments like an arrest or a trial, but Farhadi insists on keeping his story on an even keel. The stage play is the first casualty of the attack. The emotionally shaken Rana shrinks and withdraws, while Emad becomes uncharacteristically belligerent. He loses his temper with his actor friend, and spoils the rapport he’s built up in his classroom. The trap he sets for his wife’s attacker leads to a wholly believable, un-sensationalized yet highly dramatic final episode, a ‘scene’ as outwardly theatrical as the finale of the Miller play. Is Emad righteous in his actions, or wrongly vengeful? Will the marriage be healed, or destroyed?

The Salesman succeeds because the unusual setting, the cultural details and the complete unpredictability of events win us over entirely. Farhadi’s dramatic schemes are never blunt, but his intentions are at all times clear. When she takes a fellow actor’s little boy home for dinner, we see Rana and Emad acting out the family scene that they so richly deserve. But Emad becomes livid at learning that the food money came from cash left by the attacker. Rana gets a rough demonstration that Emad places his pride before her feelings – the food she cooks is no longer good enough. The ‘earthquake’ is over but the cracks are everywhere.

We’re told that Shahab Hosseini and Taraneh Alidoosti are top Persian film stars, and the acting throughout is excellent. Writer-director Asghar Farhadi isn’t a visual stylist but he does play a few games up front, opening up with angles on the colorful stage set before taking us into the everyday issues of crumbling apartments and economic realities. The emphasis on everyday realism makes Farhadi’s occasional ‘director’s moments’ all the more alarming. As Rana works in the apartment, there are no visual clues that anything is amiss, but when the camera lingers Hitchcock-style on a door left open for the wrong man, our blood pressure shoots skyward. The same happens with Emad’s discovery of drops of blood on the apartment stairs – it’s like a little bit of Psycho has slipped into the movie.

But Farhadi’s concern is for the kind of everyday anxiety that would never have interested Alfred Hitchcock. Given the fact that the film is highly restricted in what it can show, it manages to say a lot about intimate relationships. Does anyone even kiss? All of the attack happens off-screen, as an Iranian film would (presumably) never permit something even remotely like Hitchcock’s shower scene. Rana never details what happened, so we must reconstruct the event from evidence. When Emad rushes about searching for the attacker, we most fear that he will make a mistake and do something terrible to an innocent person. The formerly easygoing fellow is so worked up that he can barely drive his car. The criticism of male pride and the undercutting of the notion of vengeance becomes the film’s most worthy aspect. The resolution of the conflict doesn’t magically heal emotional wounds. Farhadi doesn’t give up on his characters, but he knows that experiences can poison relationships. 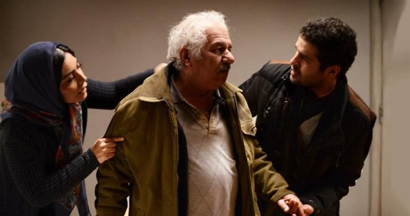 I’m impressed that the Iranian authorities allowed Farhadi the freedom to reference an American play in a non-critical context — this is in no way the kind of party-line story that one might see from the old East Germany or Cuba. Did the censors approve of The Salesman’s direct examination of gender politics, or were they won over by Farhadi’s superior humanism?

The Salesman made a splash this year for the wrong reason, the trouble with the travel ban. Like many foreign films embraced by the Academy, it promotes international understanding. I’ll bet that many Americans don’t realize that Iran is a large, prosperous and highly developed country with a growing middle class — with people that are essentially just like us despite the religious and political differences. I wish that more people saw movies like this.

Sony Pictures Home Entertainment’s Blu-ray of The Salesman is a fine encoding of this digital production (D-Cinema). The beautiful images heighten the visual contrast between the theatrical lighting of the play, and the less glamorous reality of Emad and Rana’s daily routine. The language is of course Farsi. None of the credits are translated but the dialogue is fully subtitled in English and Spanish.

Director Farhadi appears in a featurette ‘conversation’ explaining aspects of the film in the context of his work. He had planned to do another film in Paris, but changed his mind to return to a fully- Iran based project.

I’d say that the days of foreign films being seen as some kind of exotic supplement to American pictures are over. Economically speaking, The Salesman is insignificant compared to entertainments about racecars being dropped from airplanes and popping out of atomic submarines. Without pictures like this I’m not sure I’d be interested in new movies at all — and I’m very happy that creative filmmaking hasn’t disappeared completely.