Another offering of vintage East German pictures gives us all the pieces of a cinematic puzzle: Heiner Carow’s 1968 memory- movie of traumatic experiences in WW2 displeased the Communist authorities and was shelved… only to be cannibalized as a back-story for a new 1970 release aimed as a dig at West German values. It’s a fascinating comparison — an ideologically-challenged art film becomes a piece of well-produced propaganda. 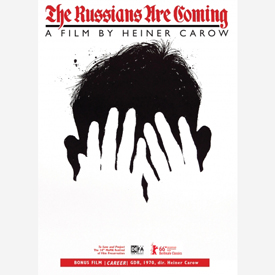 DEFA, or Deutsche Film-Aktiengesellschaft was the film producing arm of the former Communist East German regime, that ended with the fall of the Berlin Wall. For about fourteen years I’ve been covering the Region 1 releases of DEFA films as arranged by the DEFA Film Library at the University of Massachusetts Amherst. They’ve presented a range of features; not all are political but those tend to be most interesting. The vaults of DEFA are lined with pictures that were pulled from release or not released at all, offering plenty of insights into what the East German would censor.

1968’s The Russians are Coming is an extreme example of confused censorship suppression. Most banned movies were preserved, enabling us to see them later. Several pictures made in the 1960s didn’t enjoy real premieres until 1990. This movie had an even worse fate. Un-shown in its original form, it was ‘repurposed’ as a resource for another movie made two years later.

Director Heiner Carow co-adapted a well-known story, adding his own personal experience to the mix. Seventeen year-old Günter (Gert Krause-Melzer) is a not-too-bright, ordinary German boy. It is 1945, and like everyone his age, he has enlisted in the Hitler Youth. The teenagers attend rallies in preparation to serve as last-ditch soldiers to defend the heimat. We hear propaganda radio voiceovers praising young soldiers for blowing up Russian tanks, and reporting that a score of German officers have been executed for failing to defend the Remagen Bridge. The story is a loose series of episodes. Günter, his girlfriend Christine (Dorotea Meißner) and their friend Igor (Viktor Perevalov) find a dead soldier washed ashore on a beach. Igor is a conscripted laborer from the East; he escapes and the Hitler Youth are assembled to hunt him down in the forest. An adult attached to the Youth group shoots him, and for his part in the chase Günter is awarded an Iron Cross 2nd class. The boys are deployed to stop the Russians, but most of them desert as soon as the sun goes down. Finding himself alone, Günter runs home, where he’s arrested by the occupying Russians and held responsible for Igor’s death. He begins to hallucinate and under the pressure, and when they put the adult who actually did the shooting in the same room with him, his mind snaps. 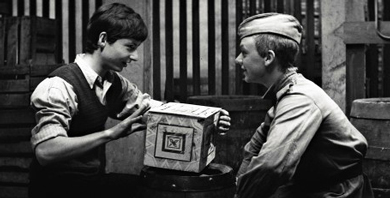 Carow’s briskly paced picture is less concerned with story issues than artistic compositions and impressionistic traveling shots of boys sweeping through the woods, and a body being carried. Günter has a distinct inability to process what’s happening to him. An intellectual schoolteacher tells him that the war is lost, but that he should keep it a secret. His girlfriend and mother offer to hide him. He sees his father, who has already fallen in combat, in hallucinatory dreams. The idealistic Günter takes Christine to the movies, where we see several scenes from 1943’s period drama Kolberg. Dr. Goebbels’ ‘inspirational’ ode to the homeland is about a town that decides to be destroyed rather than surrender to invaders. Günter seems inspired by the suicidal sentiment. Watching another couple make out a few rows behind them, Christine is frustrated that Günter isn’t mauling her as well. 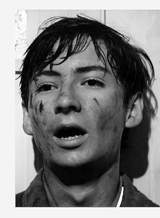 As might be expected, the invading Russians are all swell guys, and the officer who accuses Günter of murder simply wants him to stop behaving like a brainwashed Nazi and more like ‘a human being.’ For what it is, The Russians are Coming is not bad. The main actor is no Brando, but he’s believably confused. Director Carow wasn’t given much in terms of period production values. It’s supposed to be 1943 on the Baltic Coast, but everybody wears 1960s clothing (except for the uniforms, of course) and hairstyles are all wrong for both men and women. The music choices compensate to some degree. We see some Russian tanks, but the only screen action is a perfectly executed effect of a jeep-load of Russians hitting a land mine in the middle of a road. A comparison movie is the East German I Was Nineteen, a tale of another teen soldier’s real-life adventures. In contrast to this film, it displays the resources of a major war action picture.

The Russians are Coming was reportedly banned before release for two reasons. First, it wasn’t anti-Nazi enough: there is no representative to tell the audience how evil the Nazis are, and how much of a blessing was the arrival of the Russians. The second reason sounds more like what happened often in the Soviet Union: the censors objected to the film’s modern style. They didn’t mean the bad representation of the period, but the film’s emphasis on artistic effects and surreal imagery — bravura camera shots, style over practical communication.

The movie seen on DEFA’s disc is a restoration of a restoration. The Russians are Coming was dismantled in 1970, and Günter’s story used as the back story for a movie called Career. As most of the unused negative had been thrown away, when DEFA sought to reconstruct it in 1987, they only had a slightly incomplete print and various scraps, and the pristine sections that could be duped from Career. This explains the constant changes in quality in the reconstruction, which was revisited just a year ago. The soundtrack was recovered in fine condition, but the image is often scratched, or light in contrast, or has missing frames here and there. 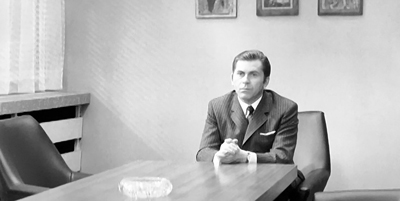 We begin to appreciate The Russians are Coming only after we see Career, the more censor-friendly 1970 movie that uses quite a bit of the first film’s footage, edited much more tightly. This show carries the weight of a full political agenda. Heiner Carow returns as director, and it’s possible that it was his ticket out of the political doghouse. We’re told that he later repudiated its political content, even though it is a frankly much better picture. Young Günter is a callow young jerk of limited interest. Seeing him in his forties, dealing with more complicated problems, gives us more to think about.

Günter (now Horst Heimer) is now an executive in West Germany, which is presented in on-the-street montages as a welter of decadent chaos. Newsreel clips show right-wing ex-Nazis claiming the right to Make Germany Great Again. Günter receives the offer of a big promotion, which delights his wife: she’ll have a more prestigious social schedule and they’ll be able to afford expensive luxuries. But Günter is dismayed at what the new job entails. His superiors expect him to suppress worker dissent; they also want him to take the rap for firing Zacharias (Friedrich Hitzer), a Communist labor organizer that management detests. The company has already fired all the older workers. The insecure younger office people treat Günter as an enemy being groomed as a new hatchet man. The pressure from above is daunting. His new assistant is a much-too-courteous guy obviously there to spy on him — or replace him, if he takes a misstep.

Günter resists management’s edicts, but doesn’t convince the employees that he’s on their side. He’s considering turning down the job. His grown son has joined a quasi- neo-Nazi group, and is learning martial arts to toughen himself up. His wife threatens to leave if he turns the new job down. But Günter remembers too well his own past (in all those flashbacks to his youth) — the management is behaving like the Nazis that almost got him killed twenty-five years before, not the humanistic Russians that simply wanted a fair society.

(Note — the characterization of the moral position is the film’s, not my own.)

Career lacks a sense of humor just like the first movie, but it at least presents a complex case. The film gives thanks to West German sources of news film, and we see effective montages showing that leaders of the right-wing political parties were formerly Nazis in high positions. The middle-aged Günter is instead stricken with a selfish wife interested only in raising her standard of living, and a son who likes politics of power and is training to be a street agitator. His big boss is a bloodless dealmaker skilled in the art of pretending that his oppressive instructions are good for the employees. The tension in the office is such that one woman has already had a heart attack. Günter must sit in his glass-walled office (not unlike C.C. Baxter in The Apartment) while his fellow employees glare at him hatefully. The film’s message is clearly that East Germans are lucky to live in a worker’s paradise away from all of this capitalist-Fascist evil.

The scenes from The Russians are Coming are neatly interpolated. Some of the artsy stuff is included — mainly young Günter’s dreams of his dead father — but everything is tightly cut instead of being allowed to play at length. This keeps us from growing weary of the young actor’s lack of charisma. Some of the re-cut scenes seem chosen for political reasons. The suicide of Günter’s high school mentor, the first film’s only defeatist German intellectual, has been dropped. Other important bits are present that were not restored to The Russians are Coming, and are missed. The reasons that Igor is being hunted down are made clear, and in a concluding scene, it is now more clear that Günter is hallucinating Igor’s presence in the cellar prison. Career is much more of an anti- West Germany propaganda picture, but it’s still more entertaining.

Defa Film Library’s DVD of The Russians Are Coming & Career is a two disc set. The transfer for Career is quite polished, while the scrappy Russians does what it can with the patch-up restoration job that lacks prime elements. Both transfers are in anamorphic widescreen, replicating the original Totalvision screen dimensions.

The two films serve as a good writing-directing-editing lesson, on a par with Roger Corman’s three or four recycled versions of the Yugoslavian movie Blood Bath. There must be other film that went through this indignity, but at the moment the only instance I can recall of a movie cannibalized to serve as back story for another, is the 1969 Sam’s Song with Robert de Niro. Ten years later, capitalizing on de Niro’s popularity, Cannon reshaped it for use in a movie called The Swap. The original is an interesting but un-commercial exercise in mood. Cannon’s reworking is unwatchable trash.

The one video extra is a German TV promo from 2016, where we see actor Gert Krause-Melzer introduced by a spokesman touting the new restoration of The Russians are Coming. But DEFA packs the disc with DVD-Rom text content. Four essays cover aspects of Heiner Carow’s films: the transformation of one film to another, a close editorial analysis, an interview with Carow, a conversation about the restoration, and an interview with Detlef Helmbold, an East German poster designer.