Is it a film noir?  This desert-set crime tale sees a rat (Ray Milland) escaping to Mexico with a bag of cash, forcing a hunting guide (Anthony Quinn) to show him the way and stealing his wife (Debra Paget) in the bargain. Remember what Godard said about only needing a girl and a gun to make a movie?  Veteran director Allan Dwan has already memorized that lesson, and pulls it off in color and CinemaScope on Mexican locations. Ms. Paget takes both a bath and a shower, only to be upstaged by a peach-colored T-Bird convertible. 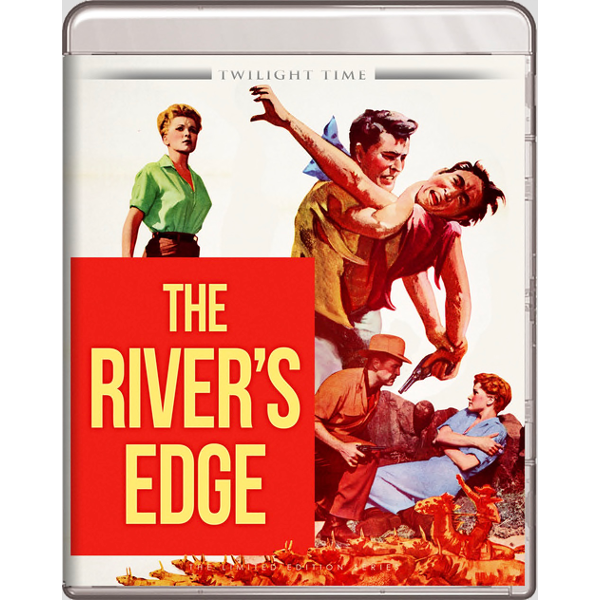 Auteurist critic Andrew Sarris praised director Allan Dwan, who impressed critic Peter Bogdanovich to the degree that he wrote a book about the pioneer filmmaker. Toward the end of his career, pushing into his ’70s, Dwan was still going strong. He directed a full eight medium-to-low budget pictures for producer Benedict Bogeaus, several of which Sarris considered to be masterpieces, at least in terms of the auteur theory. An independent, Bogeaus contracted with various distributors, and kept Dwan working through RKO, Fox and finally Columbia.

The River’s Edge doesn’t scrimp on production values — it was shot in color and CinemaScope on location in Mexico, and it has three name stars to splash across theater marquees. Yet it’s an extremely small-scale picture at heart, with just a few sets and an extended trek through the desert. Allan Dwan’s direction keeps it from looking like a cheapie.

At this point in time Ray Milland was an actor for hire, trying to re-establish himself as a director: A Man Alone, Lisbon). Anthony Quinn had won two Oscars for Best Supporting Actor, and was somewhat stuck between supporting actor and odd leading man status. The talented Debra Paget had accomplished a lot yet wasn’t reaching A-list star status — she was still playing Indian maidens now and then. The screenplay is one of those desperate desert chase stories, and gives them reasonably interesting characters. But do they fill out those characters convincingly? Despite some strong elements, the drama never quite reaches the right sense of urgency.

Near the Mexican border, ex- hunting guide Ben Cameron (Anthony Quinn) is trying to make a go of ranching. His new wife Meg Fowler (Debra Paget) is growing restless with the isolation, hardships and rough life out in the middle of a lonely desert. Meg avoided a prison term only because Ben married her, but now she’s sick of dodging scorpions and showers with muddy water, an argument ensues and it seems decided that they’ll break up. Then Nardo Denning (Ray Milland) shows up looking for a hunting guide. Ben turns him down but sends her with Nardo to town. Only then do we learn that Nardo was Meg’s partner in crime. He’s carrying a million dollars in stolen money and needs a guide to show him the way to Mexico. Meg finds herself split between both men; while the defeated Ben comes to town to sell his ranch, Nardo and Meg run into big trouble with a border agent on the road. Meg only wanted to apologize to Ben before leaving, but when the three meet again Nardo gives them an ultimatum at pistol point — they’ll have to escort him overland to Mexico, immediately.

Certainly acceptable as a thriller, The River’s Edge is lacking something. The usually spot-on Ray Milland never seems quite ruthless enough to convince us that his Nardo Denning is the real deal. He’s charming and direct but just too superficial. Debra Paget’s Meg never stopped loving him — the kind of irrational physical connection that happens all the time in real life, but is difficult to portray in movies without making the woman seem like an animal. Nardo abandoned Meg after the crime (although his excuse seems fairly plausible) and betrays her in every way, even making her an accessory to a murder. On the treck Nardo behaves like a madman, yet also retains his veneer of civility. He seems the wrong guy to be able to intimidate Anthony Quinn with a gun for two days straight.

The screenplay is a little lumpy overall. We start at a high point, with the couple’s split-up, and Ben only too late realizing that Meg’s left him for an old flame. But what we see feels like a detached finale to a much larger story, which involved a robbery, Meg’s trial, and her romance with Ben. Did she simply use Ben to avoid prison, or was she sincere?  We don’t know. She’s supposedly fed up and wants to leave Ben, but when we first see her she’s running around looking fresh as a daisy, happily baking something.

We really aren’t ready for the fast chain of desperate acts that follow. It’s not just Nardo, who tends to kill people without thinking first. Ben looks happy on his scrubland ranch, but rashly sells it when Meg walks out. After agreeing to take Nardo and Meg to Mexico for $10,000 dollars (Ben at first doesn’t know that the law is after Nardo), Ben hurls his truck and trailer over a cliff. He already sold his home, and now he jettisons where he was living when he was a guide. On one level Ben is committing self-destructive acts in despair, yet he never seems fundamentally shaken.

The trek proves the measure of the men, of course. Nardo reveals his craven villainous side, while Ben is patient, decent and protective of Meg. At more than one juncture each man must make a choice determined by their ethics and character: stay together or separate; take one road for help or another for escape. The money is packed in one of those waterproof aluminum suitcases, yet it keeps spilling out at the wrong time, precipitating more violence. When he must perform some emergency first aid on Meg, Ben uses a $100 bill to light a fire. In another nicely done scene, Meg and Ben wake up in the wild and learn of another violent development — they see a crow carrying another $100 bill, perhaps planning to feather a nest with it.

These are clever touches, but they can’t overcome the slight misalignment of actors to roles. Anthony Quinn comes off best, even if he seems too easily separated from Meg — he shows no disapproval of her, and who would let such a prize get away that easily?  Drop-dead gorgeous Debra Paget is first seen wearing frilly slippers and short-shorts, like an absurd desert version of Daisy Mae Scragg. Despite being given both a shower and a bubble bath scene and attending a dinner in a beautiful gown, Paget scales down the glamour quotient with short red hair, and spends most of the movie in a ragged shirt and Levis. Meg doesn’t seem dumb enough to believe Nardo, when he tells her that a murder she witnessed was an accident. Ray Milland comes off as neither an action guy nor a tenderfoot, and he just doesn’t seem all that committed to the role — his reactions come off as generic, when he seemingly ought to show a deeper streak of psycho behaviors. Allan Dwan and his cameraman Harold Lipstein certainly make the Mexican desert look interesting. Dwan’s direction is impressively adroit — he uses few setups but the camera always seems to be in a good place. The exceptions are the fight scenes, which are probably too wide (on fake studio sets) because the stunt doubles for both male leads are such poor matches. The most striking scene of violence sees a lawman purposely run over by a car. It doesn’t quite work either — the movie has so far been too genteel to prepare us for such a brutal act. It hasn’t the impact of the frankly insane auto-homicide scene in the eccentric Decoy, ten years earlier. In original prints (but not Warners’ DVD), femme fatale Jean Gillie backs up and does it again, essentially crushing a man three times. Retribution for Nardo comes with another near-poetic surprise on a Mexican back road.

Overall, The River’s Edge seems a precursor to a million thrillers of the past thirty years: stars are expensive, so one makes up for it with a tiny crew working on the road, or in some wilderness area. Allan Dwan handles the basics very well, but casting just doesn’t seem to work correctly. Was Ray Milland distracted, or no longer enamored of acting?   He’s similarly un-engaged in the next year’s thriller The Safecracker. But when he returned to feature films for A.I.P. and Roger Corman in 1962, he was back at full power again: The Premature Burial, ‘X’, the Man with the X-Ray Eyes.

The Twilight Time Blu-ray of The River’s Edge is a clean, crisp encoding of this interesting crime trek picture. The film elements are in great shape; the show must have been really impressive on a big screen, when Milland pulls up to Quinn’s broken-down shack in his gleaming, pastel-colored Thunderbird convertible.

Producer Bogeaus tried to keep up with current trends by commissioning the writing of a title song to go behind the credits. Composer Louis Forbes co-wrote that tune, but the standard “You’ll Never Know” is frequently heard in the movie proper. An Isolated Music and effects track is featured as one of TT’s extras, along with a trailer. The cover illustration, an original poster, uses photos but features a painting of Milland going mano-a-mano with the Mighty Quinn. It’s a mismatch almost as silly as Jack Lemmon slugging it out with Robert Mitchum in the movie Fire Down Below. The muscular image of Milland could be mistaken for a 21 year-old Robert Wagner. A special plus with the disc is an audio commentary by Alain Silver and James Ursini, who take us through the picture with information on all of its participants, especially the revered director Allan Dwan. I think it was James Ursini that first introduced me to Dwan through one of his late auteur-approved films, The Restless Breed with Anne Bancroft. They point out the writers and actors that Bogeaus and Dwan hired more than once, and analyze the film from a production point of view. Sharp eyes detect a post-production re-juggling of scene order, shortening the movie to accelerate its pace. The scene of Nardo and Meg eating now appears to happen at the same time that Ben is nearby selling his ranch, but a discontinuity of cars in a parking lot gives it away.

Perhaps producer Bogeaus had a good experience filming in Mexico?  A couple of years later, he made a big mistake with the Mexican film industry, a bizarre story that I cover in my review of Allan Dwan’s final feature, the sci-fi opus Most Dangerous Man Alive.