Vincente Minnelli took time out from expensive MGM shows like Gigi to knock off this tale about the London debutante season, a light-comedy Cinderella story without satire or social comment. Young Sandra Dee and John Saxon come off well, but the show belongs to stars Rex Harrison and especially Kay Kendall, whose comedy timing and finesse lift the tame, weightless material. Not often mentioned as a highlight of Vincente Minnelli’s career, The Reluctant Debutante is enjoyable now for the comedy playing of Rex Harrison and Kay Kendall. Harrison hadn’t been a popular film star in America for years, but producer Pandro S. Berman caught him between triumphal runs of his biggest career success, the stage musical My Fair Lady. Harrison left the initial Broadway show in November of ’57, and commenced the London production in April of 1958. That six-month opening allowed for the filming of Debutante, albeit in Paris so that Harrison could earn some money away from U.S. and English tax collectors.

The William Douglas-Home stage play had already been a BBC TV show starring Celia Johnson, Wilfrid Hyde-White, and young Anna Massey. On the big screen it gives Rex Harrison another vehicle in which to wax regal-humorous in formal dress, tossing about clever dialogue. The dialogue here isn’t all that clever, and some of the comedy verges on light slapstick suitable for a TV sitcom. But Harrison and Kay Kendall definitely have style, and sell it well.

Widowed London banker Lord Jimmy Broadbent (Harrison) has remarried; his daughter by his first wife, Jane (Sandra Dee) is arriving by air and she’s never been to London before. Jimmy’s new wife Lady Sheila (Kay Kendall) is delighted when Jane proves friendly and open minded. The newly-introduced Broadbent women need to be open-minded in the company of the socially-obsessed family friend Mabel Claremont (Angela Lansbury), whose only goal in life is to secure an advantageous marriage for her teenaged daughter. 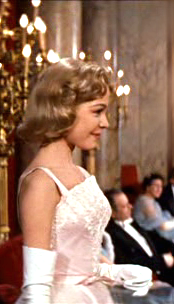 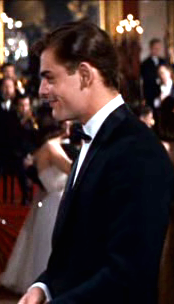 Mabel’s daughter is the pleasant Clarissa (Diane Clare of Ice Cold in Alex and The Plague of the Zombies). While Clarissa takes Jane to see the changing of the guard, the boastful Mabel gives Sheila the idea of enlisting Jane in ‘the Season,’ the yearly series of lavish coming-out balls for debutantes. Sheila all but pushes Jane at David Fenner (Peter Myers), a guardsman for whom Clarissa has set her cap. Jane is revolted by the doltish David, and instead goes for a penniless drummer who plays for the debutante band, David Parkson (John Saxon). Sheila is aghast. David P. is handsome, charming, polite — and socially unacceptable. Ugly rumors have circulated about Parkson and another debutante-to-be.

This thinly disguised version of Cinderella is as square as a show could be in 1958. Instead of satirizing the elitist snobbery of debutante society, it presents a funny pair of titled Londoners that simply roll with the tradition in good fun, as if Lucy and Desi were members of the House of Lords. Rex Harrison’s Jimmy wades through thin jokes about expenses and social awkwardness; he’s aware that the Season is a gaudy ritual. He doesn’t want it to put too much pressure on Jane, who at seventeen seems to know her own mind better than any other female in sight.

Kay Kendall’s Shelia is a sharp cookie, cheerful and bright but too easily caught up in Mabel’s enthusiasm for the Season. She becomes a lower-case Lucille Ball clown when trying to protect Jane from the presumed lothario David Parkson, dashing around in panic, listening at keyholes, etc.. Then she all but pimps Jane in David Fenner’s direction, which isn’t too pleasant. The jokes are not really sophisticated, a quality that Kendall and Harrison have to add on their own.

The supporting roles are all presented in a lesser, critical light. Diane Clare’s Clarissa is a sweet non-entity, passively suffering when she thinks her heartthrob David Fenner is being taken from her. That would be merciful considering the way Fenner is presented as an exaggerated twit, with zero personality, just an attitude. He’s given a running gag straight out of ‘Bad Play Writing 101’: his dialog consists mostly of reciting inane driving directions. When not being pompous, David physically assaults Jane, almost like Harpo Marx. Add David Fenner’s insufferable behavior to that of Mabel, and we’re ready to join the mob of English folk aiming to overthrow the entire system of titled class privilege.

The show glamorizes the hoity-toity ritual balls, even as it tells us that 1958 will be the last year that the London debutantes will be presented at court. The Queen will no longer be giving her blessing to the season’s crop of ‘acceptable’ young Englishwomen. The Reluctant Debutante simply uses the outdated, class-based Season as a backdrop for light-comedy charades. I won’t go into the story’s Cinderella aspect except to say that when the film’s big twist came around, I couldn’t believe the way the movie dodged any kind of thoughtful conflict. Even Jane Broadbent passively accepts the system. In the fairy-tale resolution she doesn’t rebel against the social system, she leap-frogs it entirely.

Lovely Sandra Dee was at least a year younger than her 17 year-old debutante character. Official stardom would arrive in one more year, with A Summer Place. She’s a ‘real doll,’ but the story’s lack of characterization leaves her as a sweet and sane cipher. Jane Broadbent never talks about the life she left behind in America. She’s too socially adept to not be missing girlfriends or a boy friend back in the States. John Saxon was seven years older than Ms. Dee. He seems to be on his very best behavior, playing a poised Prince Charming, a natural gentleman. If we discount Blake Edwards this is Saxon’s first film with a top-rank director. He gets third billing.

Rex Harrison is fine as well, but certainly not taxed by this low stress comedy stroll.  The real reason to see The Reluctant Debutante is Kay Kendall, a fine actress and comedienne. Her Sheila Broadbent ought to be annoying but is instead fairly endearing — critics compared Kendall’s comedy style to that of Carole Lombard. Kendall had made a hit in a comic role in the previous year’s Les Girls but was able to shine in just two or three worthy roles — she died very young of leukemia, just the next year. Her marriage to Harrison was brief and sad; they play well in what would be only their second movie together.

The movie would be forgettable if the stars didn’t make such good individual impressions. Vincente Minnelli seems aware that the script is empty and concentrates on performances. His visual direction stays mostly at mid-range, as usual allowing his set equal emphasis with the actors. Nothing particularly stylish surfaces for Minnelli fans to point to as a sign of his genius, and his farce comedy isn’t much improved from the grim depths of The Long, Long Trailer. But he has the good sense to lay on the charm with the father-daughter relationship. A big helping of the warmth of Father of the Bride comes into play when Jane and Jimmy are alone in the kitchen late at night. Minnelli would remain MGM’s golden boy for ten more years.

Producer Pandro S. Berman was given problems not encountered back in the Golden Age of MGM. Quite a bit of Minnelli’s previous picture Gigi had been filmed in Paris; some clever second unit work in London surely leaves audiences unaware that the cast was never there. We aren’t surprised to see that the movie carries no composer credit — 1958 was the year of a big musician’s strike, which resulted in odd soundtrack choices for a number of films. Thus Debutante uses mostly library cues. If the main title theme sounds familiar, it ought to be: it was lifted directly from the soundtrack of 1957’s Designing Woman. The dance music is assigned to a particular band leader, which must also be a dodge around the musicians’ strike. 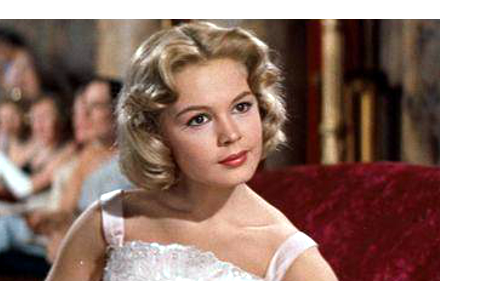 1958 was a just-okay box office year. We remember it as a time for exploitative drive-in epics, but the real winners were still big-studio efforts like South Pacific,  The Vikings  and Cat on a Hot Tin Roof.  Some accounts say that The Reluctant Debutante was popular, and others conclude that it didn’t make back its investment.

According to writer Frank Miller at the TCM webpage, Pandro Berman initiated the show. He talked MGM into not only buying the English play, but putting on a Broadway production as well. Rex Harrison rejected the adaptation work (some of it by Julius J. Epstein) so the playwright William Douglas-Home returned and changed most of the particulars back to the way they were originally. The young couple remained Americanized, though. Sheila Broadbent was made Jimmy’s second wife for purely practical purposes: Kay Kendall was barely thirty at the time, too young to be the mother of a debutante-aged teen.

The tagline on the ad for the movie’s Radio City Music Hall opening on August 14, 1958:

“That My Fair Lady’s man is at his airiest,
dream-teaming with that Les Girls girl at her merriest.
A sleek, chic delight, a laugh landslide… in short, an uproar.

The Warner Archive Collection Blu-ray of The Reluctant Debutante is quite a beauty. Old TV prints were indifferent, but seen in cameraman Joseph Ruttenberg’s careful CinemaScope proportions the show looks quite lavish. Ruttenberg really avoids moving in with the camera, as the visual quality changes radically in close-ups. Considering that it uses a patchwork of existing library cues, the film’s music plays well. To me, the main title music didn’t sound like the exact cue from Designing Woman, but I didn’t compare directly.

The Archive’s only extra is a trailer in good shape. The movie is sold as a broad comedy. I studied the key ad art used on the Blu-ray cover. Is it just me, or is something subliminal being conveyed in the way Sandra Dee is toying with John Saxon’s drum stick?

The Warner Archive has continued MGM’s worship of Vincente Minnelli’s prestigious CinemaScope productions of the studio’s 1950s decline. Okay, we’re happy to have been given the director’s Brigadoon, Home from the Hill, 2 Weeks in Another Town, Gigi, Lust for Life and Kismet in glorious Blu-ray. Will The Cobweb, Tea and Sympathy, The Sandpiper and The 4 Horsemen of the Apocalypse arrive before we’re finally granted the great Some Came Running?