Steve McQueen spent most of the 1960s avoiding lightweight movie roles — only to do well with his winning comedy-drama performance in William Faulkner’s most cheerful tale of old Mississippi. Get set for music by John Williams and an exciting climactic horse race. In storytelling terms this show would seem to have given Steven Spielberg a few ideas. 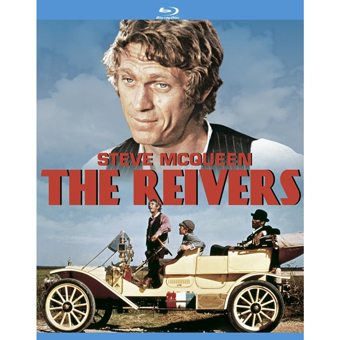 What? This movie was directed by that guy who smashed a bottle in that woman’s face in Robert Altman’s The Long Goodbye? A totally pleasant yet wholly unappreciated piece of down-home Americana, Mark Rydell’s The Reivers takes a racially accommodating look at testy subject matter and comes up with a winning combination. I don’t hear many fans of Steve McQueen coming to its defense, but this is one of the actor’s very best performances: he plays something other than his standard screen persona, and does exceedingly well. Although rarely credited for it, The Reivers also seems to have been a strong influence on Steven Spielberg.

We associate William Faulkner with darker tales of the South, but this late-career novel is a wistful, nostalgic coming-of-age story. A virtuous 11 year-old Mississippi boy — related to one of Faulkner’s tangled clans — goes on a four-day adventure in which he learns to lie and sin with the best of them. Troublemakers Boon Hogganbeck and Ned McCaslin (Steve McQueen & Rupert Crosse) are dazzled when old Boss McCaslin’s (Will Geer) shiny new 1905 Winton Flyer arrives by train. The moment that the rest of the family takes off to attend a funeral, the two men finagle young Lucius McCaslin (Mitch Vogel) into accompanying them to Memphis, so Boon can visit his ‘friend,’ prostitute Corrie (Sharon Farrell). As narrated from the far future by Lucius (voice, Burgess Meredith), this orgy of Mississippian mendacity introduces Lucius to vice and virtue, small mindedness and prejudice. In the bordello run by Miss Reba (Ruth White), Lucius defends Corrie’s honor, taking a knife wound to his hand. She’s touched by his chivalry and vows to quit The Life, but the predatory Sheriff (Clifton James) won’t let her. A drunken Ned then trades the all-important Winton Flyer for a racehorse. The only way to get the car back is for Lucius to become a jockey and win a horse race.

An easygoing comedy that leans a bit heavilyy on the nostalgia and the quaintness of ‘olden times,’ The Reivers softens a lot of its punches. Many of the negative values on display are plastered over with the sentiment that, sure it wasn’t right but that’s how things were and it was kind of beautiful that way. The pimp Mr. Binford (Michael 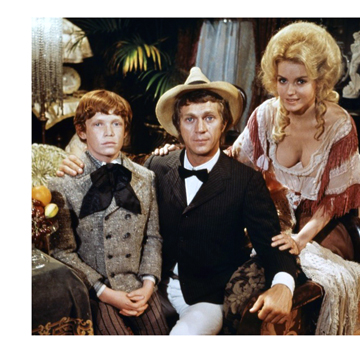 Constantine) runs a fun house occupied by basically happy women with hearts of gold. Corrie is a regular Madonna, a lady despite her profession. The race issue is handled even more adroitly. As in Faulkner’s original story, Ned McCaslin has been granted the right to be sassy and irresponsible because he’s related by blood to The Boss and even Lucius. He can cause public scenes with Boon, and not be run out of town. Only in the crooked state of Tennessee do men like the cracker Sheriff Butch Lovemaiden treat Ned as a ‘nigger,’ while holding our entire party in jail until he receives special favors from Corrie. All of that happens off screen, of course, and we’re meant to respect Corrie’s selflessness. Even Ned calls her sacrifice no big thing. The chivalrous little Lucius doesn’t except such rationalizations.

A most interesting development is Juano Hernandez’ role as Uncle Possum, a good black farmer. Possum takes care of Lucius while his friends are in jail, giving him a warm bed and making him say his prayers. Uncle Possum is a much-softened return to Hernandez’ role as Lucas Beauchamp in the all-time best American movie about race, 1949’s Intruder in the Dust. Twenty years older, Juano Hernandez still carries himself well, even if this character is not so defiantly independent.

The Reivers sees McQueen being wonderfully loose and fresh, rather than his standard moody/uptight professional. When he gives us little actor moments, it’s usually in service to the character and not a calculation to polish his appeal — like every last moment in The Thomas Crown Affair. Except for his ‘borrowing’ of Boss’s car and a broad streak of irresponsibility, McQueen’s Boon Hogganbeck is a charmer and a gent. He takes it upon himself to educate Lucius, or at least to expose the kid to things certain to bring about a certain disillusion. At age eleven? Mitch Vogel was actually thirteen during the shoot, but with Rydell’s able direction he gives Lucius a perfect spin, holding the story together. Lucius is genuinely hurt to find out hard truths about the world. His friendship with Corrie is never tacky, nor taken for granted. Being a story of corruption The Reivers would never pass muster with strict fundamentalists, especially when Burgess Meredith’s narrator is so eager to share with us the fun of sin and lying. When utter disaster is averted, and Lucius must own up to his black deeds, any reasonable viewer will feel that morality has been served. Lucius is a good little guy… for a car thief who enjoyed his first bordello fight and illegal high-stakes horse race.

After being blacklisted for roughly ten years, Will Geer spent eight more working his way back to the front ranks of character actors. This is his best Uncle Sanders-type character, a man of feeling and integrity. Rupert Crosse made an impressive debut with John Cassavetes and would have had a much longer career had he not been stopped by cancer. His Ned is a special case, a character so charming that he can slip through traps other black men might not in the Mississippi of 1905… at least in this rose-colored reading of history. Beautiful Sharon Farrell manages to make Connie both endearing and ‘1905 sexy’ without wearing trashy garments, but the actress didn’t receive the career she deserved. Ruth White died almost as the film was released; we remember her as Joe Buck’s sicko grandmother in Midnight Cowboy. Clifton James went on to stretch his cracker sheriff character in two James Bond movies, and one Superman picture. Given a sentimental scene is old hand Dub Taylor, while Diane Ladd is another of Miss Reba’s girls, making the most of five or six lines of dialogue. And no ’70s movie about crooks in the South would be complete without Charles Tyner, as an opportunist who maintains a treacherous mud hole, so he can earn money towing wagons and cars free of it. 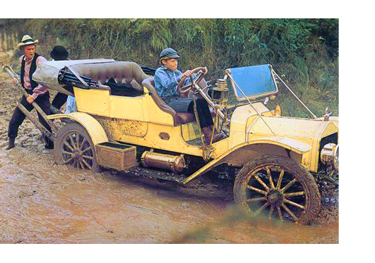 So what’s this Steven Spielberg influence angle? It’s well known that Spielberg greatly admired John Williams’ music for this show. It is an exemplary score, warm and nostalgic. The title sequence has shallow-focus scenes of happy blacks picking cotton (!) yet the music defuses any notion that we’re watching the idle daydreams of Mississippi Governor George Wallace. But something happens at the point when the second horse race scene begins.  The Reivers switches gears into what looks exactly like a technically- hyped ‘Spielberg moment.’  The horses race in a series of spectacular slow motion action shots not at all typical for the late 1960s, and in dazzling Panavision, yet. Instead of old-fashioned intercutting between racers and observers, to build suspense, director Rydell takes a step back, making the race into a subjective reverie recalled by the ‘old’ Lucius, whose voice expresses the beauty of the race in poetic terms.  To some degree it’s a formula, used often by Spielberg: a ‘wondrous’ visual + ‘wondrous’ music + a character in some kind of personal ecstasy, adds up to a Spielberg over the top ‘wonder’ effect. He often did it well.

Sometimes Spielberg doesn’t trust a scene enough to let its virtues play on their own; he’d stretch the moment out too far or add some extraneous ‘topper’ element in fear that some heartstring might be left un-tugged. I think Steven Spielberg admired not only Williams’ music, but The Reivers’ entire approach to ‘the privileged moment.’  Spielberg has given us many such moments, faltering only when he pushes too hard to make every scene into a privileged moment.  After The Reivers has generated magic, it knows when to back off.

The KL Studio Classics/ CBS Blu-ray of The Reivers is a pleasant surprise. I’d forgotten that the film is in anamorphic widescreen, and the camerawork of Richard Moore — one of the co-founders of Panavision — is very attractive. I would guess that the film element used may have faded somewhat, as the image is a bit more brownish than I remember — but of course original prints were in Technicolor. The show is attractive throughout, and that classic Winton Flyer that every male seems so worked up about, is still a bright yellow. You know, that flivver was an excellent purchase. Even with those primitive tires on those unpaved Mississippi and Tennessee roads, the thing never has a flat.

It’s too bad that Robert Relyea has passed away as it would have been great to hear his views about the production. We saw Relyea often at MGM in the 1990s and interviewed him on other Steve McQueen pictures. He spent years as McQueen’s producing partner, only to see most of their projects together delayed or set aside when the star took other offers and did whatever pleased him at the moment. I believe Relyea is only attached to The Reivers through the McQueen connection. Director Mark Rydell isn’t given his due either. The Reivers should have been a much bigger career step for him. Forget his ‘big money’ movies, the one to see is Cinderella Liberty with James Caan and Marsha Mason. Fifteen years earlier, Rydell contributed a must-see acting job to Don Siegel’s great juvenile delinquency epic Crime in the Streets.