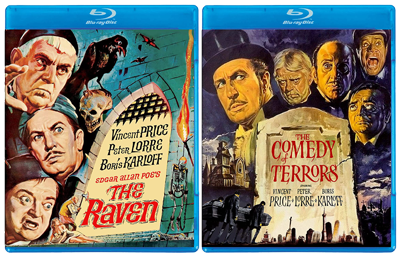 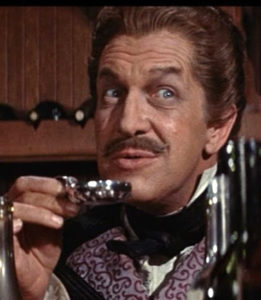 Roger Corman helped Vincent Price create his reputation as a horror movie star and in 1962 he helped him to dismantle it—already tiring of the gothic grind, the 37 year old director allowed rare humor to creep into his Poe series in the otherwise morbid Tales of Terror, a trilogy of economical horror stories written by Richard Matheson. The usual shocks were laced with laughs in the film’s second segment, The Black Cat, featuring a flamboyant Price as a two-timing wine taster. Corman and his cast enjoyed the distraction from the usual sturm und drang so the following year they returned to the well with a medieval burlesque called The Raven. Matheson was back too, contributing a simple story about Erasmus Craven (even the names have a vaudeville gloss), a wizard hastened out of retirement to rescue his wife from the gnarly grasp of Dr. Scarabus, a conniving old warlock played by Boris Karloff. The fly in the ointment, and the movie, is Dr. Bedlo, played by Peter Lorre, a great tragedian, first rate comedian, and professional disruptor—it’s Lorre’s unexpected improvisations that give some (just some) of the film a jolt of hipster humor. 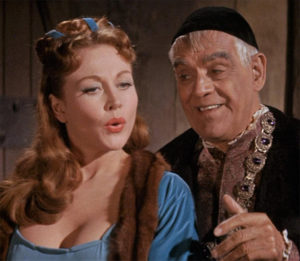 While his cast is cutting up, Corman plays his side of the camera straight, using Floyd Crosby’s polished cinematography and Daniel Haller’s opulent sets to mount what is, on the surface, a bona-fide horror film. It’s not till Lorre visits Price’s dusty catacombs and cracks “Hard place to keep clean, huh?” that ticket buyers realize they’re in for a different kind of thriller. It’s not the only shock to the system—contemporary audiences do double takes when the actor playing Lorre’s son makes his entrance: a 26 year old Jack Nicholson. Though this soon to be New Hollywood icon is surrounded by icons of Old Hollywood, he gives a clodhopping performance; his distinctive persona, one part Bogart, one part Furry Freak Brother—would be more anachronistic than the movie could handle so Nicholson has little to do but play straight man. Corman makes skillful use of matte paintings and some low-budget but playful animation to stage the big finale, a magician’s duel that mixes slapstick with the kind derring-do found in Asian fantasy epics like The Three Treasures and Magic Boy that were just beginning to land in stateside theaters. Boris is defeated, naturally, but he still ends up with Hazel Court in his lap, so don’t cry for him Vasaria. 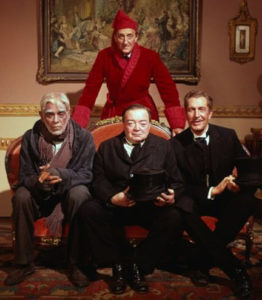 For those who thought the comedy stylings of The Raven were too subtle, its cast returned the following year in Jacques Tourneur’s The Comedy of Terrors, a film in which Basil Rathbone is unironically second-billed to a cat. Matheson contributes a story about a double-dealing undertaker and his assistant who cut costs by re-using their one and only coffin. The plot creaks into motion as hard times hit and the crepehangers begin to supply their own corpses—one target is their money hungry landlord played by Rathbone who’s handed an actor’s dream role: he gets an extravagant death scene every ten minutes. Matheson manufactured superb allegories for his science fiction work—The Shrinking Man remains a compelling portrait of sexual politics in Eisenhower’s America. But Matheson was not a particularly funny fellow and his arch and endless dialog for Comedy of Terrors is more than a mouthful for the overworked actors—it’s like being ringside at a hot dog eating contest. Lorre saved the day in The Raven with his wisecracks but as the love sick gravedigger his bad boy persona is downplayed (he’s in cuddly pussycat mode, perhaps a nod to his co-star, Rhubarb the cat). 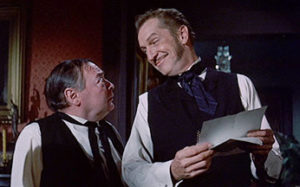 The object of Lorre’s affections is Joyce Jameson who played his long suffering wife in Tales of Terror and the girl still can’t catch a break: here she plays Price’s hot and bothered hausfrau whose attempts at seducing her husband are thwarted at every turn, no matter how much cleavage she offers up (and there’s plenty.) It’s awkward, to say the least. Corman’s remarkable talent for making the cheapest surroundings look like a million bucks eludes Tourneur—the stage bound forests look particularly chintzy and if Matheson’s dialog doesn’t flatten the audience then Les Baxter’s romper room score will do the trick—we want less Baxter.

Kino Lorber’s new Blu rays, released on separate editions, look smashing, with Comedy looking particularly good. They’ve included some worthy extras including commentaries from Tim Lucas for The Comedy of Terrors and David Del Valle for The Raven. Other extras include an interview with Corman, Corman’s Comedy of Poe on the Ravem disc and an interview with Matheson on both the Raven and Comedy discs, Richard Matheson: Storyteller. Rounding out the extras are trailers and a Trailers From Hell! commentary from Mick Garris for The Raven.