Talk about the Lost Arts — Animation of various kinds, even stop-motion, is now a major part of filmmaking entertainment. But back in the 1940s the wonder man for ‘how’d they do that’ Technicolor marvels was George Pal, a grateful displaced European who made marvelous ‘trickfilm’ animations using little wooden puppets with hundreds of interchangeable pieces. Arnold Leibovit follows up his first Puppetoon disc with a bounteous, bigger collection of animated gems in Blu-ray HD. They’re fascinating to study in slow motion — the volume of craft, patience and artisan labor that goes into these shows is staggering. 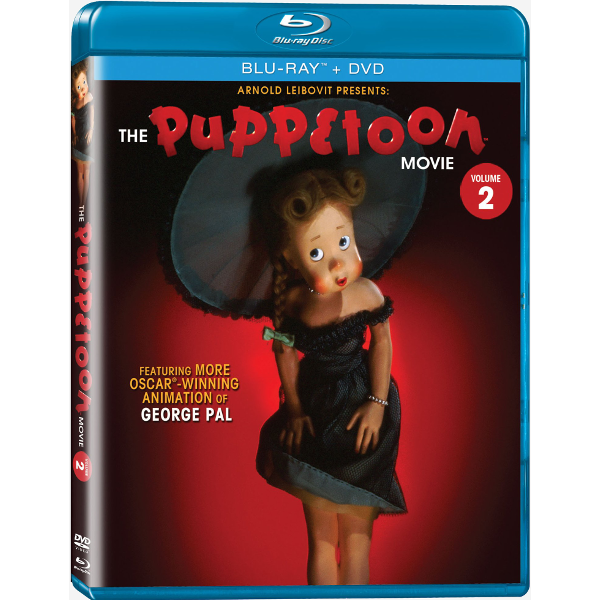 Arnold Leibovit follows up his extraordinary, independently produced disc of The Puppetoon Movie with a second volume of restored George Pal short subjects. The Puppetoon Movie was actually a theatrical release compiled in 1986; the disc was released in 2013. The Puppetoon Movie Volume 2 features many more Puppetoons and earlier European stop-motion animated short subjects produced by Pal. All are meticulously restored, some by Leibovit and others by The UCLA Archive. The string of logos on the back of the box looks like the flags of the United Nations — Leibovit had to coordinate the contributions of Paramount Pictures, Phillips, Netherlands Eye Filmmuseum, The British Film Institute, The Library of Congress, GlaxoSmithKline, KPN Telecommunications, Royal Verkade, Shell Oil Company, UCLA Film and Television Archive, Netherland Institute of Sound and Vision, J. Walter Thompson, and Miles Laboratories.

By my count there are eighteen short subjects here in High Definition, and a few items in Standard Def. Most have been out of circulation in any form, except perhaps for random TV showings. UCLA had a sophisticated animation department and some big fans on the faculty; a screening class devoted to animation could show a number of Puppetoons because they were part of the newly-formed Film Archive’s Paramount holdings. In original nitrate prints they looked sensational. If I recall, Randall William (Randy) Cook also talked the instructor Robert Epstein into showing Jason and the Argonauts in that class!

We of course knew all about George Pal from his science fiction movies; the first issues of Cinefantastique had told his story. Hungarian-born ‘György Pál Marczincsak had his own company at age 25, and spent the second half of the 1930s in several countries creating long-form advertising films for big companies, several of which are included in this Volume 2 collection. Even with the war in progress Pal managed to get a visa and in 1940 moved his family to America, where Leibovit explains that he was aided by colleagues in Hollywood. Disney, Fleischer, Lantz — the conventional cel animators knew and admired his continental work.

With eighteen HD examples, the ‘toons on display here exhibit more variety than did Volume 1. They include four rarely screened, sensationally creative ‘Jasper’ shorts. These prompt a disclaimer up front with text proclaiming that, yes, indeed, we are mature adults and can distinguish malicious racist content from films made in the context of an earlier era … as if our culture is any more enlightened now. Yes, it’s not very flattering to see African-Americans stereotyped in these animation models. Jasper lives in a shack that leans 20 degrees. The raggedy no-account Professor Scarecrow is a duplicitous thief and all-around scoundrel. There’s no denying the essential racist content, but I don’t believe they should be suppressed.

Pal of course specialized in stop-motion replacement animation, in which beautifully modeled body parts for a puppet, made mostly of painted wood, would be used to show a character emoting and talking, or distorting in reaction to something, just as would a cel animation figure. The characters are heavily stylized, like design illustrations. The exacting animation thrilled and charmed audiences of the 1930s. It has an artisan-originated feel. Everything we see is an elaborate miniature, even the huge landscape sets.

The European advertising films are little narrative gems that create self-contained  stop-motion worlds. Some include standard cel animation and one a lot of live action, with dialogue in Dutch. A few early items directly pitch a new light bulb or other product, but most couch the sales in a lively story, often with music and ‘dancing’ puppets. Some (all) of these advertising shorts were filmed in a three-color monopack process called Gasparcolor, which originated in Hungary years before Eastmancolor; it’s hard to tell if the colors are soft and muted because that was the nature of the process, or if some fading has occurred. Some examples I’ve seen elsewhere show brilliant, deep colors.

The later American Puppetoons are all in Technicolor. Leibovit explains that the process for filming them required three-minute exposures for each frame of film. The shows were incredibly labor intensive, considering the time to design the elaborate settings, build the characters (sometimes with 100 replacement heads) and time out the animation for the complex musical sequences. There are no short cuts — everything we see was engineered to be filmed by a camera, and when anything was double-exposed, filming time was doubled.

Puppetoons are also titled as ‘Madcap Models’ shorts. Each is a self-contained adventure, some with recurring characters. Some are based on musical numbers. The humor is gentle, simple — Pal wasn’t one to apply multi-leveled wit to his shows. A happy-go-lucky character named Jim Dandy has his own series, and shows up in this collection as a troubadour in a knights-in-armor spoof. Two ‘Rusty’ shorts are here, Rusty being a kid who has strange dreams at night. Wilbur the Lion is a one-shot circus performer who regrets retiring to Africa. (It’s a weird one, with a strange non-moral.) 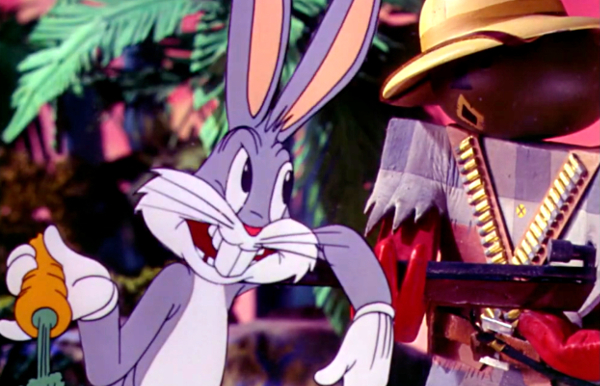 We get cowboys, a boy who takes on the identity of Superman (authorized!), a cameo appearance by WB’s Bugs Bunny (authorized!) and some spectacular stylized dream sequences, such as a show in which Jasper and Professor Scarecrow are pursued by a train made of dice (the Prof was cheating Jasper at craps).

Played straight through, Pal’s European work alternates with the Paramount Puppetoons. An extras section contains a long-form oil promotion, a video relating TV’s ‘Speedy Alka-Selzer’ commercials to Puppetoons, and some other items. The full lists are below.

Short subjects in High Definition (Red is Technicolor and Blue is Gasparcolor): 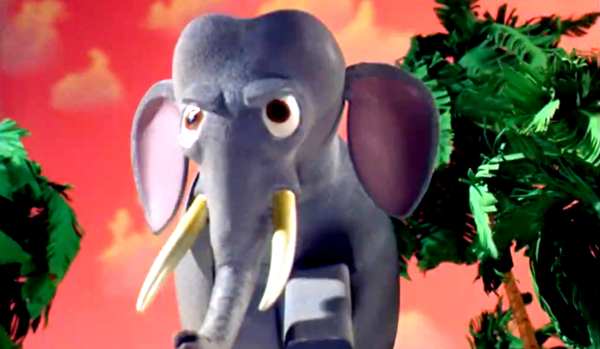 Arnold Leibovit Entertainment’s Blu-ray + DVD of The Puppetoon Movie Volume 2 is a handsome, smoothly assembled group of quality restorations. The Technicolor material looks near-perfect, with perhaps a hairline scratch here or there when the source film was a one-of-a-kind 35mm print. The European films all have very subdued color but are still attractive, displaying their color design clearly. One or maybe two of the European films is in B&W.

The menus all function well on this professionally produced disc. The Standard-Def ‘extra’ items are listed below.

Removable subtitles are present, but only for dialogue and signage in languages other than English. The second disc contains the same content in Standard Def DVD quality. A folding insert carries Arnold Leibovit’s informative liner notes. Entries for the main short subjects come with full credits. The foldout promises a The Puppetoon Movie Volume 3.