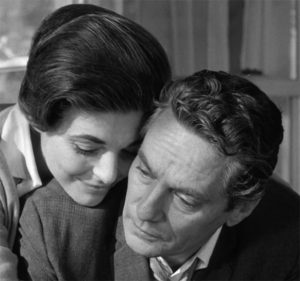 In the fall of ‘64, while Hollywood was gently satirizing the battle of the sexes with Send Me No Flowers and What a Way to Go!, Europe was at work in the trenches, peppering art houses with piercing dramas like François Truffaut‘s The Soft Skin and André Cayatte’s dual release, Anatomy of a Marriage: My Nights With Francoise and My Days with Jean-Marc (“One Ticket Admits You to Both Theaters”). Perhaps most unforgiving of all was Jack Clayton’s The Pumpkin Eater starring Anne Bancroft, Peter Finch and James Mason.

Bancroft plays Jo Armitage, a fragile beauty who responds to her husband’s infidelities by getting pregnant. Finch is Jake, a screenwriter whose recent success has emboldened him to walk on the wild side thereby provoking Jo to over-crowd the nursery. Mason is, once again, the odd man out, the deceptively genial husband of one of Jake’s conquests. 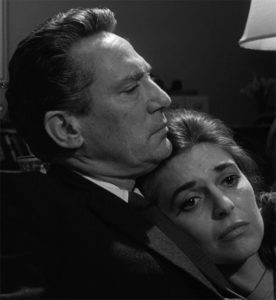 Clayton, a filmmaker who had equal reverence for the library and the movie screen, usually began his projects with a book by his side – John Braine for Room at the Top, Henry James for The Innocents and Scott Fitzgerald for The Great Gatsby. The Pumpkin Eater was a double-barreled literary attack, boasting a screenplay by playwright-director Harold Pinter and based on Penelope Mortimer’s quasi-autobiography. Novelist, film critic and so-called “angry young woman”, Mortimer and her book were lauded as “in touch with human realities and frailties, unsentimental and amused”. All those elements show up in Clayton’s adaptation save for amusement – if there was any humor in The Pumpkin Eater, it was so sour it was left to curdle off screen.

Pinter the playwright was fascinated by the “quicksand qualities” of memory and his staged works were often referred to as “memory plays.” Told in flashbacks, The Pumpkin Eater unfolds in a kaleidoscope of gauzy imagery, slow fades and startling jump cuts – a memory movie. Jo and Jake make love, fight, reconcile and grow further apart while their marriage enters into a bad-dream state – a refined version of the marital and maternal woes endured in David Lynch’s nightmarish Eraserhead. 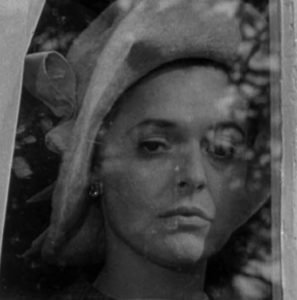 In any crisis, Jo’s default position is to stare blankly into space and that’s how we first meet her – framed in a picture window on the grey day she leaves her husband. Clayton’s camera moves incrementally closer to the desolate figure, brushing past her and on into the apartment. Mimicking the opening moments of Rear Window, the camera roams the living room searching for signs of married life – an ashtray heaped with stubs, a beaten down typewriter. In Hitchcock’s film, the tracking shot offered visual clues as to how a careless photographer landed in a wheelchair. In Jo and Jake’s case, it’s a cinematic still life of the mess they’ve made of their marriage. Though Clayton’s technique is oblique, his film is a fairly linear trip through the steady decline of that once happy union. 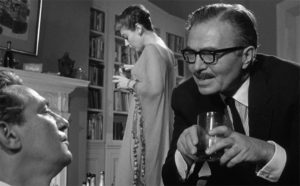 Pinter’s spiky repartee dramatizes the punch-drunk fatigue of a man and a woman all too familiar with the other’s weak spot – like boxers, they know exactly when to jab, when to feint and what punch will land hardest. At other times Pinter’s famously stylized approach is almost a parody of itself with dialog that no sentient earth person would think to utter. That comes into stark relief with the introduction of a crew of outré supporting characters who seem to flock to Jo and Jake like bad pennies. 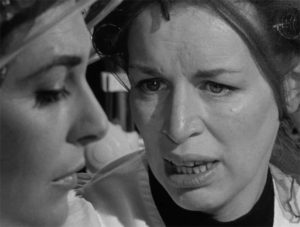 It wasn’t lost on contemporaneous critics that the moody couple are pretty dour company (Bosley Crowther complained Jo “wallows in self-pity and philoprogenitiveness. That’s all.”) so the filmmakers drum up some fun by surrounding the duo with eccentrics – one of Jake’s mistresses is a layabout sex kitten (played by a 30 year-old Maggie Smith), another interloper is a schizophrenic who assaults Jo in a beauty parlor (an unnerving cameo from Yootha Joyce, perhaps best known as Tallulah Bankhead’s enabler in Die! Die! My Darling!). But it’s James Mason as the cuckolded businessman who gives the sometimes somnambulant movie a wake-up call. The great actor, who just two years earlier embodied Humbert Humbert “… the great big handsome hunk of movieland manhood”, transforms into a mealy-mouthed backbiter with a bad mustache – a coward who gets even with his cheating wife by attacking Jo. 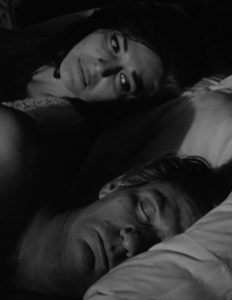 Though Clayton’s direction sometimes stumbles in the direction of a Cassavetes film, shaky camera and all, much of The Pumpkin Eater recalls his sublimely poetic work in The Innocents. Bancroft and Finch couldn’t be better – particularly Finch who suggests a truckload of mixed emotions with a cocked eyebrow. Bancroft is clearly the eye of the storm and there’s no forgetting she’s the star of the show; she aces a terrifically theatrical moment with a show-stopping nervous breakdown in the linen department of Harrods.

Oswald Morris’s superb black and white photography and the delicate score from Georges Delerue tick all the boxes of a  high class production – it all looks and sounds properly elegant on the new release from Shout! Factory – The Anne Bancroft Collection. The Pumpkin Eater appears to be the same transfer from Powerhouse Indictor’s 2017 release. And that’s a good thing – the transfer is beautiful and Shout! borrows two of the extras from that same disc:

Jeremy Mortimer on Penelope Mortimer which features the writer’s son commenting on her her life and work.

Dinah and Fergus in which actors Frances White and Fergus McClelland discuss their roles as part of Jo and Jake’s ever-growing brood.

You can read Glenn Erickson’s review of The Anne Bancroft Collection here.