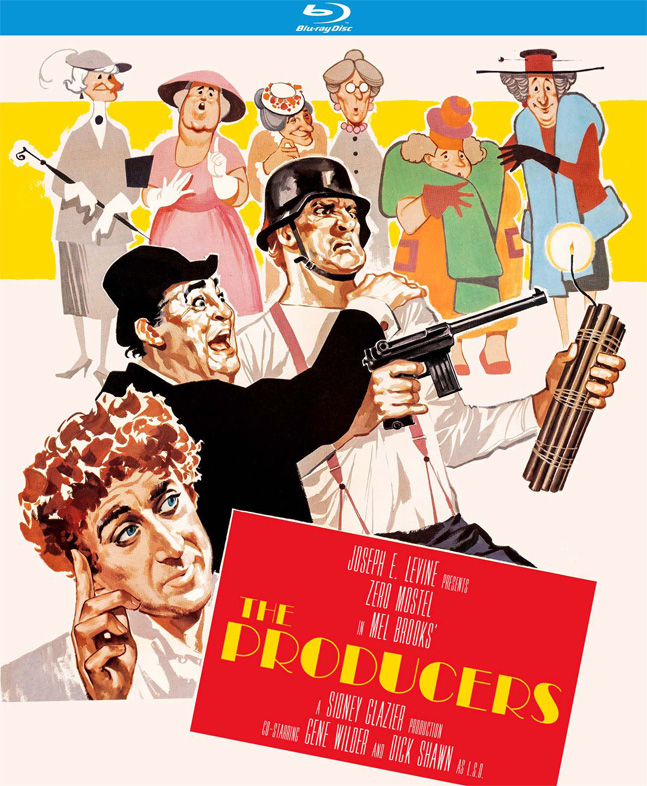 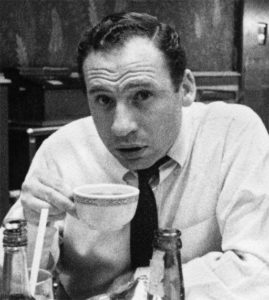 At his most unrestrained, Mel Brooks would have made Voltaire blush. Would such uninhibited comedy survive under the gaze of today’s self-appointed blacklisters? The answer can be found in the success of that very uninhibited Amazon darling—not to mention Academy-approved—Borat Subsequent Moviefilm. Starring Sacha Baron Cohen, the film documents the latest diplomatic outreach of Kazakhstan’s most enthusiastic xenophobe, Borat Sagdiyev. For the past twenty five years Cohen has sicced this deeply racist, anti-Semitic, and somehow weirdly lovable doofus on civilization’s bad actors up to and including bottom-feeder extraordinaire, Donald Trump. Cohen infiltrated much of MAGA-world for Borat’s latest adventure which was highlighted by a full-body impersonation of Trump (in a Coppertone-colored skin suit), and a hotel room encounter with the slimy Rudolph Giuliani at his most slithery. When it comes to weaponizing vulgarity in the war against such vulgarians, there’s not much that separates Brooks and Cohen except their tactics; the English comedian takes a guerrilla approach, wading into the midst of a surly Trump mob where righteous anger (and a fair amount of adrenaline) energizes his mission while Brooks’s most pointed satire is staged with the full-throated ebullience of an MGM musical. No matter how heinous his targets, Brooks remained sunny side up—his debut film, 1967’s The Producers, featured the ne plus ultra of heinous targets. 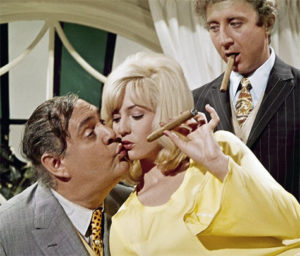 Brooks’s tale of two shady entrepreneurs with a get-rich scheme is a candy-coated morality tale; lie down with the devil—in this case Nazis—and wake up on Broadway. Gene Wilder plays Leo Bloom, a mild-mannered accountant prone to panic attacks that are more like nervous breakdowns (do not deprive this man of his comfort blanket). Bloom rounds every corner expecting a catastrophe and he finally finds one in the outsize presence of Zero Mostel as a conniving mountebank named Max Bialystock, a once great show biz figure who’s taken to bilking grandmothers out of their bank accounts. Though Bloom has come  to audit Bialystock’s books, he finds his own inspiration in the con man’s questionable accounting: what if a producer—this is just thinking out loud, mind you—would oversell shares in a Broadway play so vile that it’s destined fail and thereby make this hypothetical producer rich? Bialystock knows a sucker—and a pushover—when he sees one—soon he and Bloom are celebrating their new partnership. 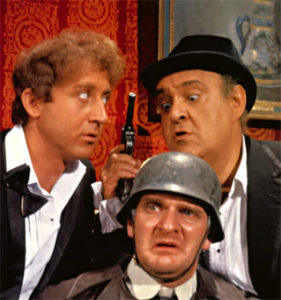 The two men spend several bleary-eyed nights searching for just the right wrong play until they come upon a winner sure to be a loser, Springtime For Hitler, written by a part-time pigeon keeper and full time goose-stepper named Franz Liebkind (he wears a Stahlhelm around the house as his own comfort blanket.) Played by Kenneth Mars, the cuckoo-bird Liebkind is just the first in a long line of nutcases on Bialystock & Bloom’s want list—they need a director and Max knows one, Roger De Bris, a no-talent whose plays usually “close on the first day of rehearsal.” DeBris is the kind of character movie critics in the thirties used to describe as “flamboyant” and he certainly has a knack for excess, just the right man to choreograph a musical finale with chorus girls forming a Swastika—he’s a fascist Busby Berkeley. 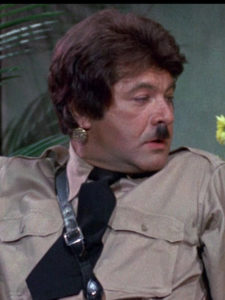 Everyone in Bialystock’s world is a crank, an eccentric, or a desperate loser who’ll do anything for a buck—and Brooks loaded the cast with actors ready to do anything for a laugh, including the English actress Estelle Winwood as “Hold Me! Touch Me!”—as her nickname implies, she’s the most ardent of Bialystock’s geriatric seductions. Lee Meredith is a va-va-voom secretary by way of Minskys, a go-for-broke Christopher Hewett is DeBris, and Dick Shawn is the screwloose cherry on top as the man with the title role in Springtime For Hitler; Lorenzo Saint DuBois—L.S.D. to his friends. Shawn, as well as Brooks, came alive in the footlights and his appearance as the zonked hippie who backs into the role of Adolf Hitler is a real commitment to the art of the gonzo. Though The Producers has more than its share of dead spots, and Brooks’s inclination to repeat a gag is in full effect, the staging of Springtime for Hitler itself is, well, boffo. Brooks is a song and dance man at heart and even before the finale The Producers threatens to turn into a bona fide musical—the moment when Bialystock and Bloom celebrate their partnership as the Lincoln Center fountain erupts around them would, in most movie musicals, be a cue for the actors to break into song. Thankfully Brooks has a chance to scratch that Broadway itch which even extends to a finale that finds Bialystock and Bloom behind bars but hard at work on their latest sure-fire flop, Prisoners of Love. 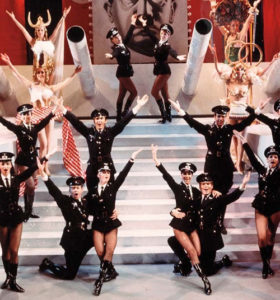 Being a Mel Brooks film, The Producers has a shoot from the hip quality appropriate for his freewheeling humor but his debut effort looks particularly rough around the edges (he found his directorial groove with Young Frankenstein.) As Michael Schlesinger points out in his fine commentary for Kino Lorber’s new Blu ray, Brooks had a lot of help from legendary film editor Ralph Rosenblum (the man who shaped up Annie Hall). Mike also points out that Rosenblum’s behind the scenes autobiography, When the Shooting Stops…the Cutting Begins: A Film Editor’s Story, is more than a little self-aggrandizing. Though Rosenblum was key in the editing room he couldn’t make Joseph Coffey’s cinematography any prettier—Coffey’s work is just serviceable—though Kino’s transfer is splendid, with great color and excellent detail.

Along with Mr. Schlesinger’s commentary there are several excellent extras included—a lengthy documentary directed by Laurent Bouzereau from 2002, The Making of The Producers, outtakes, a tribute to the film from Peter Sellers (read by Paul Mazursky) and the original theatrical trailer.