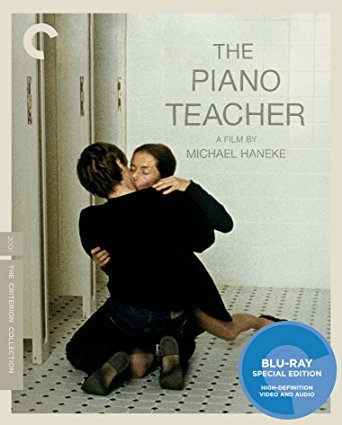 Her face merely a mask just waiting to crack along with her sanity, the tortured spinster at the center of The Piano Teacher is a Blanche Dubois for the S&M set. Her name is Erika Kohut, a brilliant but merciless tutor entrenched in a swank Viennese conservatory where she brings a surgical precision to her teaching (while leaving the anesthesia at home). She’s a harsh mistress, no doubt, but she’s merely assumed the mantle of her mother, a clinging horrorshow who monitors her middle-aged daughter’s every move while provoking nightly brawls that begin in the living room and end in the bedroom; a sick parody of a bad marriage.

It’s both unnerving and exhilarating to watch a control freak lose their control and Isabelle Huppert’s immaculate performance supplies both emotions in spades, revealing Erika’s resistance to intimacy as well as her longing for release from her Rapunzel-like confinement. Her liberation may be at hand with the arrival of a fast-talking young man named Walter Klemmer, an engineering student and wanna-be concert pianist.

Walter (Benoît Magimel) is everything the girl with a Tiger Beat subscription could want in a guy; Scandinavian good looks and a talent for hockey and the arts. He’s got the hots for Erika and wants nothing more than to be her student. Well, there is something more he wants and in a remarkable approach-avoidance seduction scene in the conservatory’s sterile lavatory, Erika lays down the rules of engagement for her frisky new pet.

Delivered via a handwritten note (“I’ll write down what you can do to me”), those rules include some of Erika’s favorite things: ropes, chains, slaps to the face and the aforementioned rim job. Walter’s horrified rejection is not the kind of humiliation this beautiful masochist signed up for and it opens the door to a knife-wielding denouement that is purely Hitchcockian in its escalating suspense and distinctly Huppertian in its unnerving revelations.

Based on Elfriede Jelinek’s 1983 novel, The Piano Teacher has the measured tone of Éric Rohmer’s so-called “moral tales” including My Night at Maud’s or Claire’s Knee (the photographer Christian Berger does a superb job of emulating the delicate colors of Rohmer’s great Spanish cameraman, Néstor Almendros). But director Michael Haneke uses that ultra-controlled atmosphere to accentuate the stormy passions beneath Erika’s sedate surface; the actress and director wander down a few back alleys that the demure Rohmer would never condescend to approach.

Haneke’s directorial approach is cooly harmonious and he scores his most provocative points in graceful, unobtrusive ways including the overhead shot of Walter’s hands tickling the ivories as Erika’s tantalizing legs rest nearby, a teasing composition that would fit neatly into a De Palma film. Or the remarkable continuous-shot sequence that begins on an ice rink and ends with the pathetic Erika sprawled on the floor of a locker room, begging for mercy. Haneke’s film is a master class in discipline, in more ways than one.

Criterion has done a wonderful job bringing Haneke’s tragicomedy to blu ray starting with its luminous transfer of Berger’s photography. The disc features several worthy supplements including insightful interviews with both Huppert (The Actor’s Quest) and Haneke (Viennese Obscenities), each taking a deep dive into poor Erika’s misguided lust for life. Another invaluable addition are 50 minutes of scene specific commentaries from Huppert. A booklet with an essay by Moira Weigel and the film’s theatrical trailer are also included.

The presentation wraps with a candid video of Huppert and Haneke, 20 minutes of a post synch session which gives us a look at Huppert’s remarkably acute insight into her art. What a great teacher she could be. Please ma’am, may we have another?