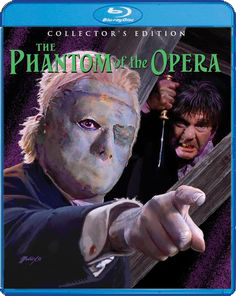 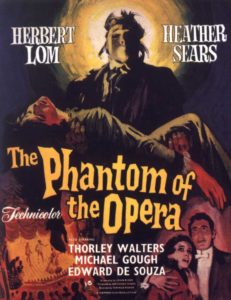 Hammer Studios made their mark by viewing Universal’s classic horror films through a contemporary lens—which for the late 50’s and early 60’s meant more explicit sex and violence—albeit sex and violence served up with baroquely beautiful cinematography and Byzantine art direction—like Roger Corman they offered “brilliance on a budget”. If the artists at Hammer felt intimidated by Universal’s shadow it never showed—but there was noticeable excitement when their 1962 adaptation of The Phantom of the Opera was announced with a production floated by plenty of money, a full blown operatic score, and Cary Grant in the lead. It never happened that way, of course.

What did happen was this: the 11th-hour exit of their fickle star made the generous budget shrink like a panicked stock market. They did retain one of their finest directors, Terence Fisher, and brought on board an arguably superior phantom—Herbert Lom, an actor of seemingly limitless range who played with equal conviction a low-rent crook in The Ladykillers, Napoleon in War and Peace, an inspector suffering a hilarious nervous breakdown in A Shot in the Dark, and the King of the Huns in Die Nibelungen. 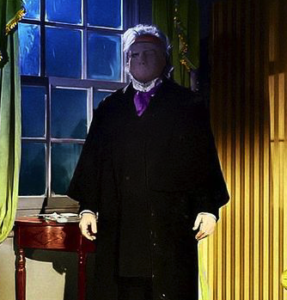 Anthony Hinds wrote the script under his occasional pseudonym “John Elder.” His storyline combines elements familiar to Hammer devotees—gothic romance,  a misunderstood monster, and a tragic denouement. Lom plays Professor Petrie, a doomed soul without even a lost love to mourn. Petrie instead loves only music—in particular his pièce de résistance, a years-in-the-making opera that was promptly stolen by Lord Ambrose D’Arcy, a satanic music publisher played by Michael Gough. Petrie will do anything to regain control of his music, and murder is the least of it.

Heather Sears plays Christine, a promising young contralto who’s spirited away by Petrie’s Phantom for some face-to-mask singing lessons. Edward de Souza is the director of the opera, Christine’s lover, and her eventual savior; he’ll navigate the opera’s sewer system and the Phantom’s murderous assistant to free the songbird and bring justice to the composer. 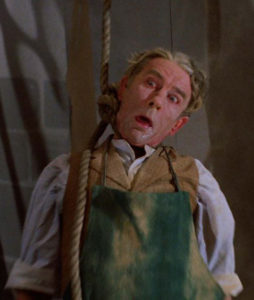 Petrie’s tragic story is undercut by Hinds’s (and really the studio’s) compulsion to interject standard-issue shocks that trip up the momentum rather than adding to the pathos. At times those scares are witty and successful, like the throttled stagehand who makes his stage entrance swinging by his neck. But many of these grisly set-pieces feel tacked on and lazy—an eye-gouging attack on a rat-catcher by the phantom’s misshapen accomplice makes no narrative sense—it’s just gruesome spectacle. More egregious is the botched finale at the opera house when the Phantom rescues Christine from the famously falling chandelier—Petrie rips off his mask just so the audience is able to gawk at his disfigurement—and is flattened by the massive candelabrum for his trouble.

Fortunately the successful moments outshine the bad, in particular a flashback to the fateful night when Petrie sets out to reclaim his rights—a storm-drenched pantomime with the primal power of a silent film; overwrought and stagy but very effective. A close encounter with a tray of acid sends Petrie over a guardrail and into the Thames where he’s swept into his new home—the catacombs of the Royal Opera House. 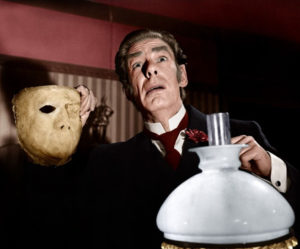 Lom does fine work both behind the mask and without—his passion could easily turn as operatic as his music but he keeps his sorrow in check and is both intimidating and heartbreaking. Sears and  de Souza are a cute couple even if no fireworks go off during any of their mundane canoodling. Gough’s rancorous snake in the grass is a part he had perfected years before in Horrors of the Black Museum—twirling an invisible mustache and glorying in the boos from the cheap seats. Lord Ambrose is not nearly as outrageous a character as the spittle-flecked scientist in Konga or the thin-skinned zookeeper of Black Zoo but he’ll do (even if the louse does get off scot-free—a dramatic stumble Hammer fans are still grousing about). 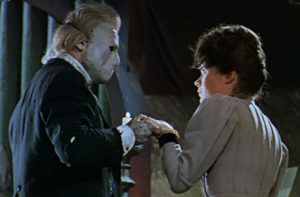 The Phantom has had a checkered track record on home video. A dreary VHS release, a ho-hum DVD, and then, finally, Universal’s 2016 Blu ray set which put things mostly right—at least in the matter of The Phantom (all the other fan favorites were crippled by bizarro-world aspect ratios). This new release replicates the beauty of the Universal set but goes it better—several times over.

There are not one but three different versions of the film, one in 1:66 (for UK release), 1:85 (for American audiences) and the expanded TV version shot by Universal for American broadcast. There’s also a smorgasbord of extras, many featuring the affable de Souza. The mini-documentaries are not just one and done, they’re of formidable length. The TV version is in mighty dodgy shape but great for completists. In other words, the disc is worth it for the extras alone. Here’s the official rundown:

Here’s Brian Trenchard Smith on The Phantom of the Opera: