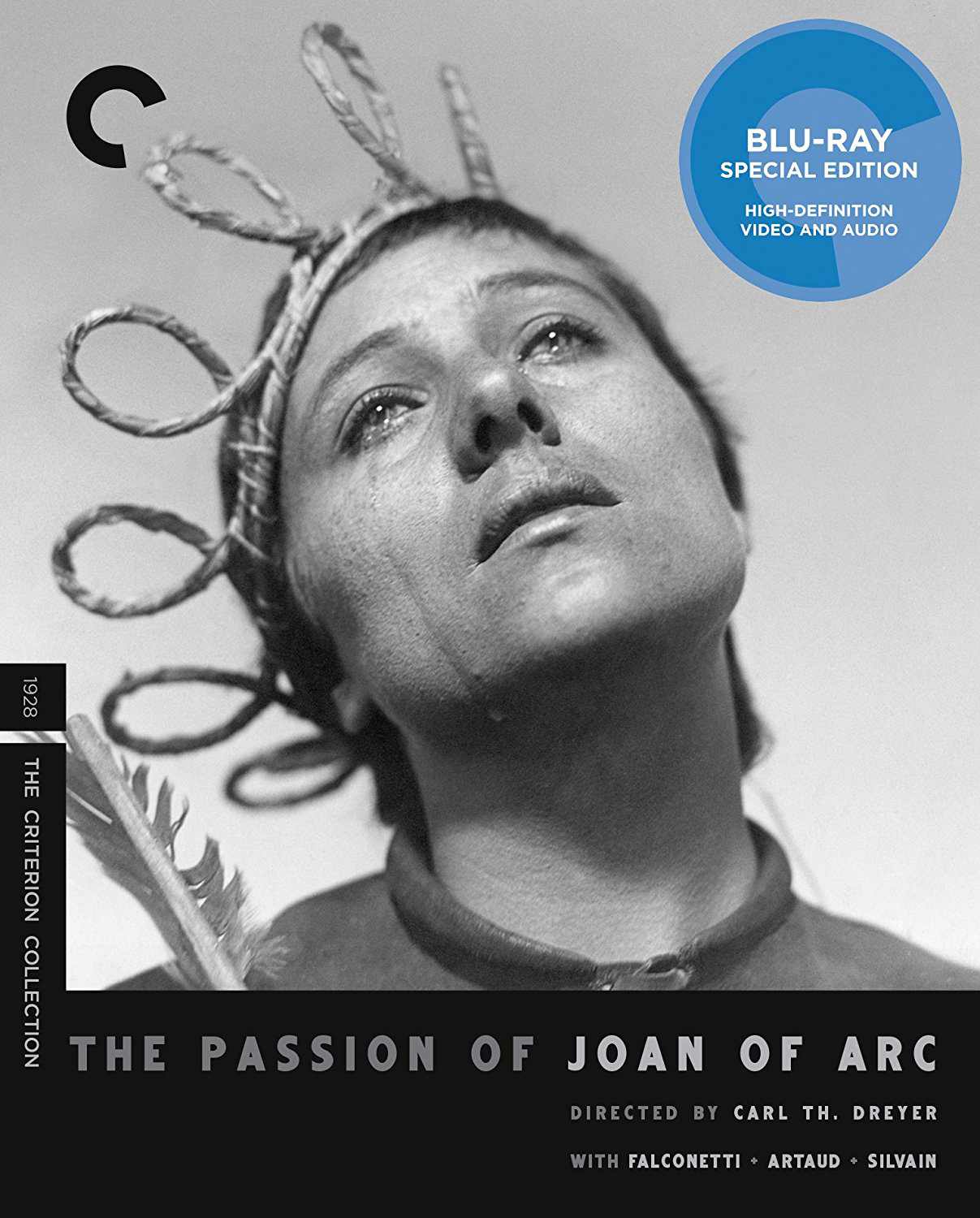 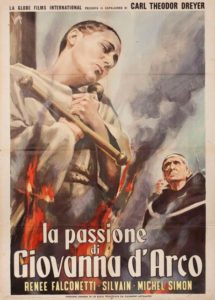 For over a century the story of Joan of Arc has been catnip to an army of filmmakers ranging from DeMille to Bresson. Surrounded by meddlesome producers and difficult divas, maybe those weary moviemakers saw something of  themselves in the embattled heroine – but no director had better insight into God’s own rabble-rouser than Carl Dreyer.

90 years on, The Passion of Joan of Arc continues to astonish. Combining the grim-faced piety of Renaissance art with the unvarnished intimacy of depression era portraits, Dreyer’s 1928 masterpiece still has the power to transform the lowliest grindhouse into a cathedral.

In 1417 a trio of angels appeared to the 13 year-old Joan, urging her to take up arms against English invaders. With that this determined young woman transformed the 100 Years War from an inheritance dispute into a religious conflict. In 1430 she was imprisoned in the tower at Normandy’s Rouen Castle. The minutes from her trial are the basis for Dreyer’s screenplay.

Joan’s story is straightforward but her director’s methods are not. Cinematographer Rudolph Maté’s camera seems to rest in the actor’s laps, fascinated by their pockmarks and reveling in the microscopic detail of their wrinkles. When Dreyer does favor us with a wider shot the camera tracks through the crowd with unsettling speed. The movie’s fidgety editing (by Dreyer and Marguerite Beaugé) adds to its disorienting mise en scène.

Just the sight of stage actress Renée Falconetti might have inspired Dreyer to tell his story with what amounts to a magnifying glass; Falconetti’s tear-stained profile is turned into a veritable panorama, enveloping the screen till it obscures Jean Hugo’s set designs. And that may be the point; the actor’s faces, each with their own distinctive geography, are the sets. In the case of Joan’s inquisitors, they come by way of Notre-Dame; these sunken-eyed monsters are living gargoyles straight from the church precipice.

The interrogators (including playwright Antonin Artaud and L’Atalante’s Michel Simon) believe they can threaten Joan with the church itself, a fifteenth century version of gaslighting. It’s hardly necessary to point out that the tribunal is exclusively male but what is both peculiar and ominous is that they seem unusually disturbed by Joan’s male garments. 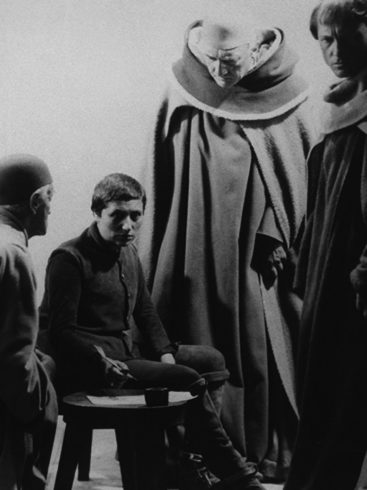 As an illustration of the patriarchy at work, it has a particularly insidious significance; Joan’s cross-dressing was not just a symbol of her crusade – her choice of clothing had a no-nonsense rationale; she was able to fasten a man’s military uniform in such a way that it would protect herself against an almost certain rape.

The ghastly images of Joan’s head being shorn in preparation for her immolation is another kind of violation; over and over, from the taunting of her accusers to the leering sentries outside her cell, she endures a specifically sexualized form of punishment.

The threat of the stake reappeared 16 years later in Dreyer’s Day of Wrath – this time the target is a young and sexually curious housewife accused of witchcraft. The sultry blond responds to the allegations by adopting the sinister aspects of the genuine article. 1955’s Ordet, on its face a cautionary tale about religious zealotry, concludes with a bone fide miracle. Apparently Dreyer, feeling we should not be so complacent, took some delight in pulling the rug out from under our feet.

The Passion of Joan of Arc casts its own seeds of doubt – that disorienting style, a defiant mix of the baroque and modernism – is it meant to reflect Joan’s madness? Or a frenetic journey toward martyrdom?

Those same questions linger over Joan’s death. As the flames engulf her, she appears to arrive at a state of grace. In Leonard Cohen’s Joan of Arc, he described the fire in comforting terms; “she climbed inside… to be his only bride”. That sentiment may be why Dreyer spared us the aftermath of the real Joan’s execution; once she was taken from the stake, what was left of her body was burned twice more, then cast unceremoniously into the Seine.

Joan opened in New York City on March 28, 1929 where she joined a distinctly American sisterhood of good-time girls and drama queens from Clara Bow in The Wild Party to the scandal-ridden Jeanne Eagels, then haunting broadway in The Letter (she had died just after the film’s release). New York’s reaction to Dreyer’s film was split down the middle; critics didn’t spare their superlatives but paying customers stayed away; while they were happy to coo over Eagels’ gentile suffering, the sight of Joan’s charred flesh was too much.

Until some savvy entrepreneur books Dreyer’s classic into an Imax theater where Falconetti’s profile could be seen in its proper grandeur, Criterion’s brilliant new Blu ray release should more than suffice.

In addition to the stunning new restoration of the film, Criterion has included two soundtrack options for the film along with the original silent version; Voices of Light, the 1994 oratorio by Richard Einhorn, and a new soundtrack from Goldfrapp’s Will Gregory and Portishead’s Adrian Utley. Einhorn’s score offers a bit of a cushion for the audience -Dreyer’s brutal imagery doesn’t land with quite the power of the silent version and in some moments the film’s subtle meanings are telegraphed. Nevertheless Einhorn’s music is a rapturous experience.

Gregory and Utley’s score is a worthy counterpoint to Einhorn’s effort, utilizing the basic instruments of a rock band and jazz ensemble aided by a soaring chorale to fashion their own distinctively modern take.

Other worthy supplements include a short audio interview with Falconetti’s daughter Hélène (conducted by Einhorn) and an illuminating conversation between Gregory and Utley about the challenges of scoring a one-of-a-kind masterpiece.

The full rundown from Criterion’s site:

New 2K digital restoration of the film by Gaumont, presented at 24 frames per second
Alternate presentation of the film at 20 frames per second with original Danish intertitles
Two scores: Richard Einhorn’s Voices of Light; one by Goldfrapp’s Will Gregory and Portishead’s Adrian Utley
Audio commentary from 1999 by film scholar Casper Tybjerg
New interview with Einhorn
New conversation between Gregory and Utley
New video essay by Tybjerg exploring the debate over the film’s frame rate
Interview from 1995 with actor Renée Falconetti’s daughter and biographer, Hélène Falconetti
Version history
Production design archive
Trailer
New English subtitle translations
PLUS: An essay by critic Mark Le Fanu, a 1929 director’s statement by Carl Theodor Dreyer, and the full libretto for Voices of Light