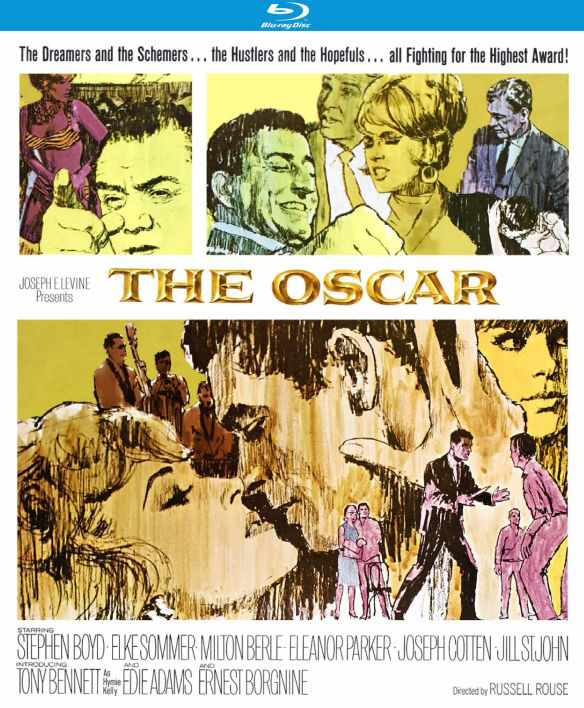 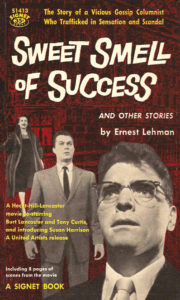 Alexander Mackendrick’s Sweet Smell of Success is a great movie with two career-best performances from Burt Lancaster as a malignant gossip columnist named J. J. Hunsecker and Tony Curtis as press agent Sidney Falco – “a real louse.” The third star of the show is surely the screenplay by Ernest Lehman and Clifford Odets – a lyrical pastiche of streetwise slang that sizzles like “a pocketful of firecrackers.”

Hunsecker – What’s this boy got that Susie likes?

Hunsecker – I’d hate to take a bite outta you. You’re a cookie full of arsenic.

And so on. Mackendrick’s Broadway melodrama is a tale of bright lights and the big city so some hyperbole is expected. But Lehman and Odets were performing a high wire act – one false move and such rich repartee could ripen and rot – like this dialog from another show biz story…

Frankie – You make my head hurt with all that poetry!

Kay – You’re wasting your time. I’m not the kind of woman who uses sex as a release or even as a weapon. 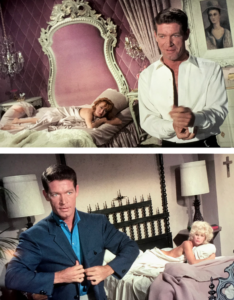 If you can still think straight after that, here’s the lowdown; “Frankie” is Frankie Fane, a short-tempered actor and part-time psychopath who won’t let anyone get between him and The Oscar. Most of the conversations in this rags to riches potboiler are jam-packed with exclamation points and director Russell Rouse underlines each one of them, amplifying the hysterics in every scene – one imagines Rouse grabbing the actors by the lapels and screaming his instructions.

Stephen Boyd plays Frankie, a hyper-ventilating heel who goes from pimping his stripper girlfriend in backroom smokers to a lush life in a Bel Air bungalow. Frankie rides his overactive libido over one smitten kitten to the next – the hot-to-trot felines just asking for it include Jill St. John in tiger-striped underwear, Elke Sommer modeling Krafft-Ebing approved lingerie (the soft purr of her German accent gives the risible dialog an otherworldly quality) and Eleanor Parker, clad only in bedsheets and a lovely head of tousled red hair. All of these women end up in bedsheets and tousled hair eventually – according to Richard Sale’s novel of the same name, it’s the result of Frankie’s “animal magnetism… a sex drive that comes off you like hot steam.” 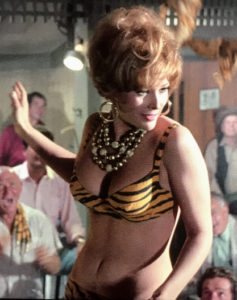 So The Oscar is no more subtle than its source material. Indeed, the producers seemed eager to top it, drawing inspiration from Olympia Press, Confidential Magazine and the kind of sin-in-the-suburbs exposés found in The Saturday Evening Post. In an attempt to play down the smutty activity with a high-gloss fig leaf, Rouse and producer Clarence Green aim for the swank interiors of a Ross Hunter soap opera but the sets are strictly Tiki Lounge and plastic-covered couches (irony jumped out a window when the film’s production design was nominated for an Oscar.)

The screenwriter behind this overheated hash was science fiction icon Harlan Ellison who took a look at Plan 9 from Outer Space and said, “Hold my beer.” Ellison recalled The Oscar’s opening night: “I practically wept. I saw this film for which I had worked for a year, and people are laughing in the theater and they’re laughing at dramatic moments. And I’m sinking lower and lower and lower in my seat. I remember it as if it were yesterday. I said, ‘This is the end of my feature film career.'” 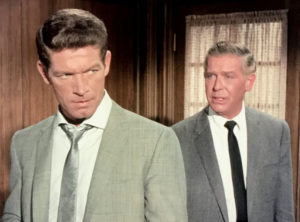 That was mostly true – apart from L.Q. Jones’ 1975 adaptation of his short story A Boy and His Dog, Ellison would stick close to television work with memorable episodes of The Twilight Zone and The Outer Limits. For other members of the cast and crew it constituted not the end but a kind of temporary purgatory – those in limbo include Joseph Cotten as a grumpy studio head who sizes up Frankie as “Just a big hunk of meat!”, Ernest Borgnine as a shady gumshoe and Milton Berle as (no kidding) “Kappy” Kapstetter, Frankie’s long-suffering agent. 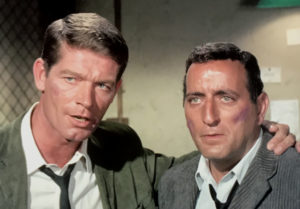 But it was Tony Bennett’s film career that was well and truly DOA – in his first and last bona fide acting gig the great singer plays Frankie’s long-time pal and designated punching bag, Hymie Kelley. He was doomed the moment disbelieving audiences heard his name and went down for the count when they listened to him explain its origins – “From my father, Michael Kelly! And he got it from his father, Timothy Kelly! And my mother’s name was Sadie Rabinowitz! Any more questions?!”

Hymie also gets the opportunity to narrate the film and so is given the lion’s share of Ellison’s endlessly quotable dialog. The cast is packed with enough star power for an Airport sequel and the string-heavy mush of Percy Faith’s score serenades them all the way to Oscar night at the Santa Monica Civic Auditorium where Frankie finally gets his well deserved comeuppance. Or does he? 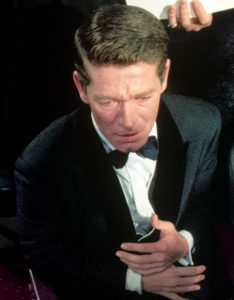 Of course he does!

Upon its release most critics were licking their lips – they knew a sitting duck when they saw one. Bosley Crowther called it a “cheap, synthetic film that dumps filth upon the whole operation of Hollywood.” Not surprisingly Los Angeles critics were far kinder, finding just enough to praise (or tolerate) so they couldn’t be accused of tap-dancing on Hollywood’s most sacred cow (the movie premiered at the hallowed Egyptian Theater in February of ‘66 – eight weeks before the actual Academy ceremony.)

Movies this loopy usually have their fits and starts – there are long periods of boredom in the touchstones of the genre – a Hall of Shame that includes Showgirls (Viva Las Vegas meets The 120 Days of Sodom), Yes, Giorgio (Luciano Pavarotti as Sex Object) and Robot Monster (its claim to fame a diving helmet, gorilla suit and bubble machine). The Oscar is never boring – two hours breeze by like a Preston Sturges satire and it feels way shorter than Last Year at Marienbad. Crowther was appalled by the film’s rancid atmosphere but he was ignoring the therapeutic qualities of misanthropy – the lacerating banter of Sweet Smell of Success is as bracing as a cold shower while the misadventures of Frankie Fane deliver a comical catharsis like no other. How can something so wrong feel so right? That is the mystery of The Oscar.

For years The Oscar has been shunned – forced to wander the Hollywood Walk of Fame and cry “Unclean! Unclean!” ABC put it in prime time in 1969 but it wouldn’t see home video till Embassy released a VHS in 1985. Occasionally a bad-looking print in the wrong aspect ratio would pop up on TCM and (ironically) The Egyptian itself has had occasion to schedule a revival. So it’s Kino Lorber to the rescue – their new Blu ray features a remarkably good-looking picture and is punctuated by some lively repartee from those in the know. 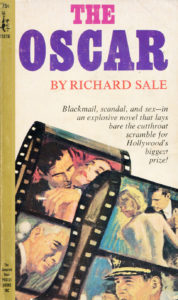 If you weren’t expecting a Flavor Flav reference to be directed at a movie featuring Hedda Hopper and Army Archerd, then you don’t know the tag-team of Erik Nelson, Josh Olson and Patton Oswalt whose commentary for Kino’s Blu ray offers up equal parts film history and rowdy back-of-the-class wisecracks. All three were fans/friends of Ellison and Olson comes with receipts – in this case the complete 344 page (!) script from Ellison himself. The uncut gem features, among other things, a sizable backstory for “friend Frankie” with equally delirious dialog. The disc also boasts a second commentary from the film historian trio of Howard S. Berger, Steve Mitchell and Nathaniel Thompson.

Kino has somehow located a near-perfect print for the film (Oswalt mentions the time he saw that revival at The Egyptian and the entire screen was pink). Storied cinematographer Joseph Ruttenberg (The Philadelphia Story, 1941’s Dr. Jekyll and Mr. Hyde) met the project on its own terms and, apparently using a National Enquirer cover as inspiration, he catches the cast in the harsh, unseemly glare of a just-popped flashbulb. That’s Kino’s Blu – and The Oscar – in a nutshell.