Scream favorites Vincent Price and Christopher Lee become tangled in an African curse, grave robbing, a premature burial and a clutch of throat-slashings — yet the two stars have no real scenes together. Steve Haberman’s well-researched and insightful commentary tells the story of Gordon Hessler’s first production for the English arm of American-International Pictures, a movie planned to be directed by the mysterious Michael Reeves. 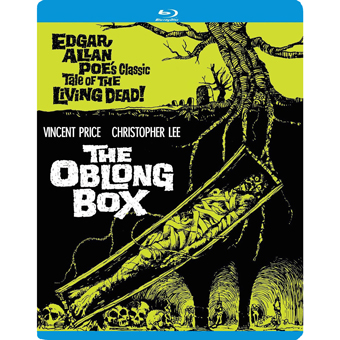 I’ve been doing my best to warm up to the filmic output of producer-director Gordon Hessler. I agree that Hessler’s three major A.I.P. titles have higher production values than many stinkers of the time, when even the output of Hammer Films was tapering off in appeal. No matter how much Hessler is celebrated by Video Watchdog and other respected genre writers, the movies themselves are unengaging. For my money they’re a waste of great talents like Vincent Price, Peter Cushing and Christopher Lee. Did British horror of this time really have to be such a dead-end genre?

As reported by Steve Haberman on his excellent feature commentary, the ill-fated Michael Reeves prepared The Oblong Box but dropped out a week before shooting; his last film would become his previous Tigon / A.I.P. hit Witchfinder General. To its credit The Oblong Box does not try to imitate a Hammer production. It also has competent direction, acceptable settings and decent acting. But it’s also a fairly pointless tangle of crooked betrayals that lead to some throat cuttings and a premature burial. Hessler’s film doesn’t really seem to understand what it’s doing: a lot of generic horror activity does not a satisfying horror film make. 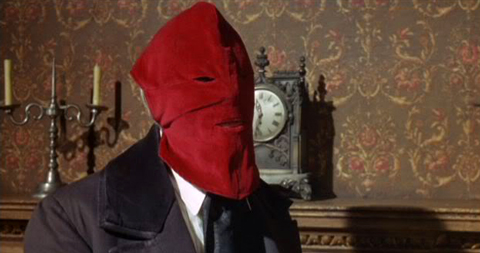 The name of the game is the Wages of Colonial Sin. Sir Julian Markham (Vincent Price) keeps his supposedly deranged brother Edward (Allister Williamson) locked up in secret, even from Elizabeth, Julian’s own fiancée (Hilary Dwyer, from Witchfinder General). Horribly disfigured by witch doctors in Africa, Edward is sufficiently in control to bribe Markham’s lawyer Samuel Trench (Peter Arne) to set him free. N’Galo, an African witch doctor in London (Harry Baird) is paid to prepare a drug with which Edward can simulate death, and escape the household. A mix-up of corpses and murders ensues, after which Edward becomes another secret relative, this time in the house of the body-snatching doctor Neuhart (Christopher Lee). Wearing a red mask, Edward stalks the roads between London and several outlying villages. He’s after revenge — and to find out why the African natives punished him so cruelly. The secret, of course, lies with his guilty brother Sir Julian.

The Oblong Box has Vincent Price and Christopher Lee, and is therefore well worth checking out. Price’s performance is of course spot-on, although he seemingly thought of no way to overcome the thin storyline. Chris Lee yet again appears in a glorified cameo. He’s on screen barely long enough for us to critique his fussy hairstyle, which I presume is a wig. For even his smallest films Lee usually takes care to nail down a specific look, but here he looks ready for a TV soap opera. Nothing in the picture is worthy of the fine actors engaged, but that’s true of many of their films around this time. It’s perhaps too much to expect something as sublime as the old The Body Snatcher, with its career highlights for Boris Karloff and Henry Daniell. Yet in The Oblong Box the main players barely interact unless they’re trying to kill each other. Do Lee and Price barely share once moment together. 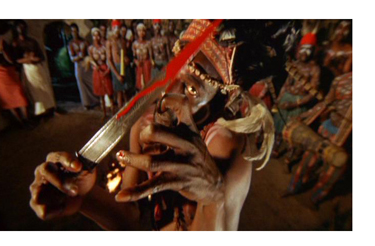 The story is a mix of assorted horror content, unsalted: a premature burial, voodoo revenge, a mutilated masked avenger. Colonial oppression is the main Evil here, although it’s woefully undeveloped. Hammer made fairly adroit use of this theme ten years before, in a politically less enlightened environment. Terence Fisher made the two best examples. In 1959’s The Mummy Peter Cushing’s scientist hero purposely behaves intolerantly, as a ruse to bring an Egyptian fanatic out in the open. The delirious The Stranglers of Bombay offers the argument that benign colonial authority is the only force keeping India from being overrun by an obscene murder cult. Later Hammer pictures blamed ‘horrible’ foreign cultures as a source of monsters like The Reptile and, when appropriated by Britons, The Plague of the Zombies.

But in The Oblong Box the source of the evil back in Africa is totally muddled. We can’t tell if the killing of a young boy that starts the terror is accidental or not. The idea that the wrong brother paid the price for the crime is established well enough, but we never know how Julian ran his African plantation. Does either brother really deserve to suffer? Furthermore, besides nailing him through his hands and mutilating his face, it’s never stated what magic has been worked on poor Edward. When we finally see him, he honestly doesn’t look that bad. And we never really see Edward behaving in a deranged manner. He seems to have kept his cool even while buried alive, which is more than we can say for Ray Milland. At the conclusion, the exotic African sickness we thought was a smokescreen excuse for Edward’s imprisonment, appears to have been real all along. The ‘shameful’ scar on Julian’s face is presented as if Edward had passed on a bad dose of ‘racial VD.’

Although the story meanders, avoiding scenes with solid dramatic content, a great many minor characters mill about on dark errands. The mechanics of the body snatching is done fairly well. Neither the grave robbers nor the cops serve as silly-oaf comic relief, which improves on the typical Hammer setup. It’s been pointed out that every character save for the clueless Elizabeth, is a villain hurting others for one reason or another. She’s wasting her time on Julian, who is guilty in an unsympathetic way.

What we really have is a circle of corruption. The duplicitous Julian thinks he’s paid the crooked lawyer Trench to snatch a corpse, but Trench kills somebody instead. The no-nonsense real body snatcher might as well have a union card, he’s so professional in his duties. It’s interesting that he alone of the players has the sense to know when enough is enough. Dr. Neuhart pays the grave robber, and is given a ‘research grant’ by his murdering houseguest. The ‘African Justice’ angle fails to convince because the local witchdoctor-practitioner, N’Galo, is as venal as the Anglos when he trades knockout pills and murders for cold cash. Although both handsome and educated, N’Galo is just an exotic menace. The film actually depicts him using a native blowgun to kill.

Mr. Haberman’s informative commentary tells us that the lumpy storyline was padded with last-minute additions to add more exploitable content. We get some additional throat slashings, with very fake blood. Also some extra nudity, during a tame excursion to the local brothel. Edward seems too resolute of a revenger to be sidetracked by the prostitute Heidi (Uta Levka, also from Gordon Hessler’s Scream and Scream Again, coming soon from Twilight Time). If we’re expected to believe that Edward has gained a heart and is searching for the maid Sally (Sally Geeson), the script should have given him the opportunity to establish more of a relationship with her.

The story dishes out its just desserts with out deriving much excitement from its scandalous series of killings. Almost everyone is carved up, and the survivors learn little from the events. Vincent Price just gets to keep on brooding. Hilary Dwyer brightens the show with her presence, but she’s been left almost completely out of the plot, and knows next to nothing of what’s occurred. Price’s servant is nicely played by Michael Balfour, who is memorable as a key henchman in Polanski’s MacBeth, made a couple of years later. None of the supporting players can be faulted, and those rewarded with reasonably developed parts, like Peter Arne as Trench, do excellent work. The Oblong Box really needs a stronger, more involving script. The fans of Price and Lee will of course be eager to see it, as both actors acquit themselves well. For horror aficionados, that will be more than enough. 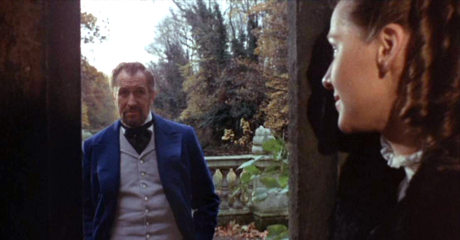 The KL Studio Classics Blu-ray of The Oblong Box is a fine encoding of Gordon Hessler’s first horror outing for Louis Heyward’s London arm of American-International. Colors are accurate. When MGM acquired the Orion library in the middle 1990s, the studio’s film services department revisited many titles from this era, and returned this one to its original length. I should devote an article sometime to the individuals I knew there that went out of their way to restore even these genre pictures. In today’s studio climate such responsible care is becoming a luxury.

I really enjoyed Steve Haberman’s great commentary — and I especially envy his speaking voice. I’m enthusiastic even when I disagree with some of his conclusions. I don’t see Gordon Hessler as a very artistic director, while writer Christopher Wicking has his name on too many unnecessarily muddled genre pictures. I also grow quizzical when Haberman describes Oblong Box as visually accomplished. To me John Coquillon’s cinematography is weak. The flat interior lighting doesn’t do much more than highlight the one-color-fits-all pancake makeup on the main actors. I realize that by 1969 few horror movies used expressionist lighting, but the drab day for night exteriors express less than nothing. The film is ‘covered’ instead of directed. Hessler’s direction of the one-shot dialogue scenes simply have the actors shuffle themselves like cards as they talk, so they aren’t standing still. That’s a TV directing ploy, for soap operas. 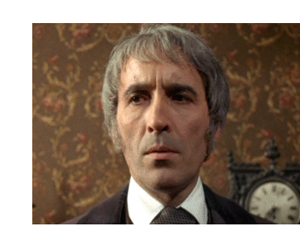 Haberman’s diligence in the research department is impressive. He constantly imparts interesting information and the connections he makes between events and personalities are convincing. Haberman’s account of Michael Reeves’ sorry retreat from filmmaking is especially insightful. By not starting from the usual position of ‘wronged genius,’ the commentary makes Reeves far more sympathetic.

Kino includes the original trailer; twelve years later, it’s still the one with no narration track. Several other horror trailers from Kino are included, as is a student film version of Poe’s Annabel Lee, narrated by Vincent Price. I’ll bet that Price contributed his vocal talent just to help out.